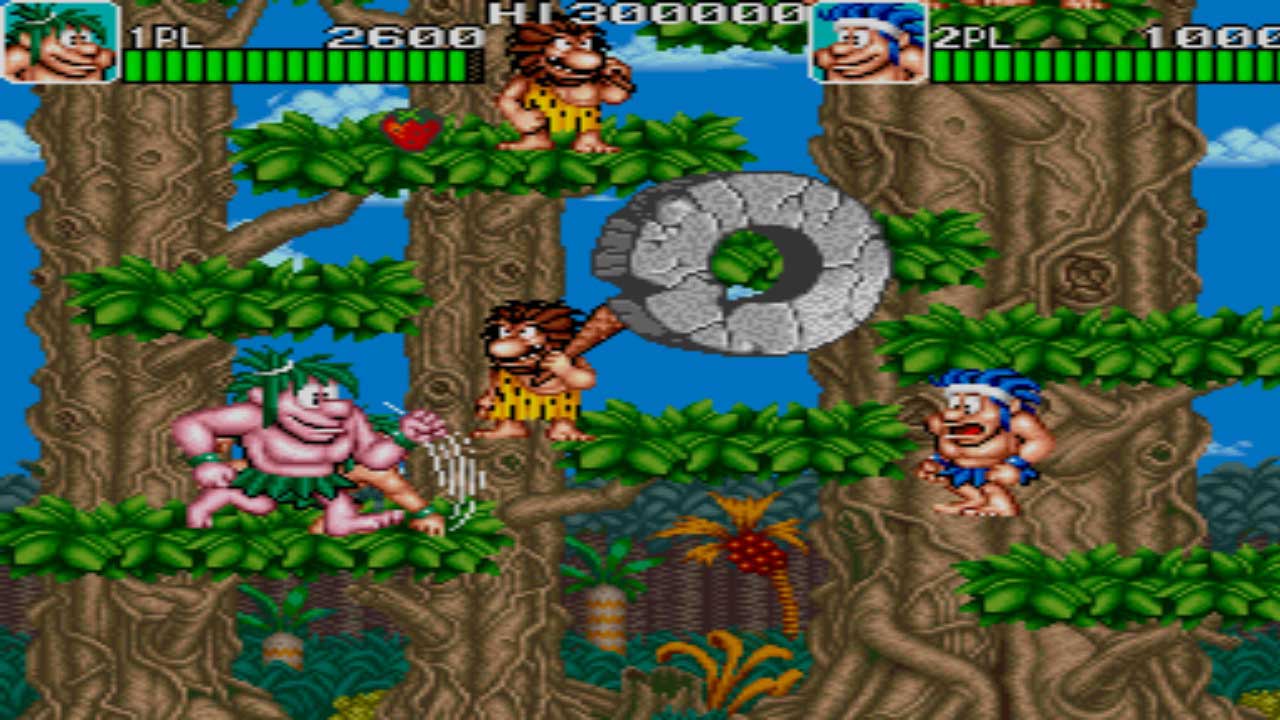 There are wizards everywhere. Magicians and sorcerers who wait in the wings to bring wonder and joy into this world. I say this because I invoked the names of Joe and Mac not once but twice last year, and Johnny Turbo was apparently listening, because now the cock has come home to roost. Obviously the SNES version isn’t Johnny’s forte, so it’s back to the arcade classics we go as Johnny Turbo Presents Joe and Mac: Caveman Ninja.

The plot is simple: Joe and Mac are two gnarly cavemen who have evolved to be a bit more clean-cut, a bit buffer, and they’re getting all the chicks. The local neanderthals, being still pretty primitive looking, decide to kidnap all the fine prehistoric babes, and this is definitely not cool for Joe or Mac. Strangely, the rest of the world (dinosaurs, because screw facts) are totally opposed to Joe and Mac getting their ladies back. It’s not clear if it’s because the dinosaurs want to end this cycle of ownership of women, regardless of instigation, or if they’re actually embittered that Joe and Mac have realized a more civilized future and, as dinosaurs, represent the inherent resistance to change that comes with every culture. Or if dinosaurs are just chaotic beings and whatever, hitting dinosaurs is fun. Either way, get back all five ladies and destroying the weird lizardman who’s actually behind all the lady kidnapping. Oh, right, this game came out in the early 90s. Plot holes solved! 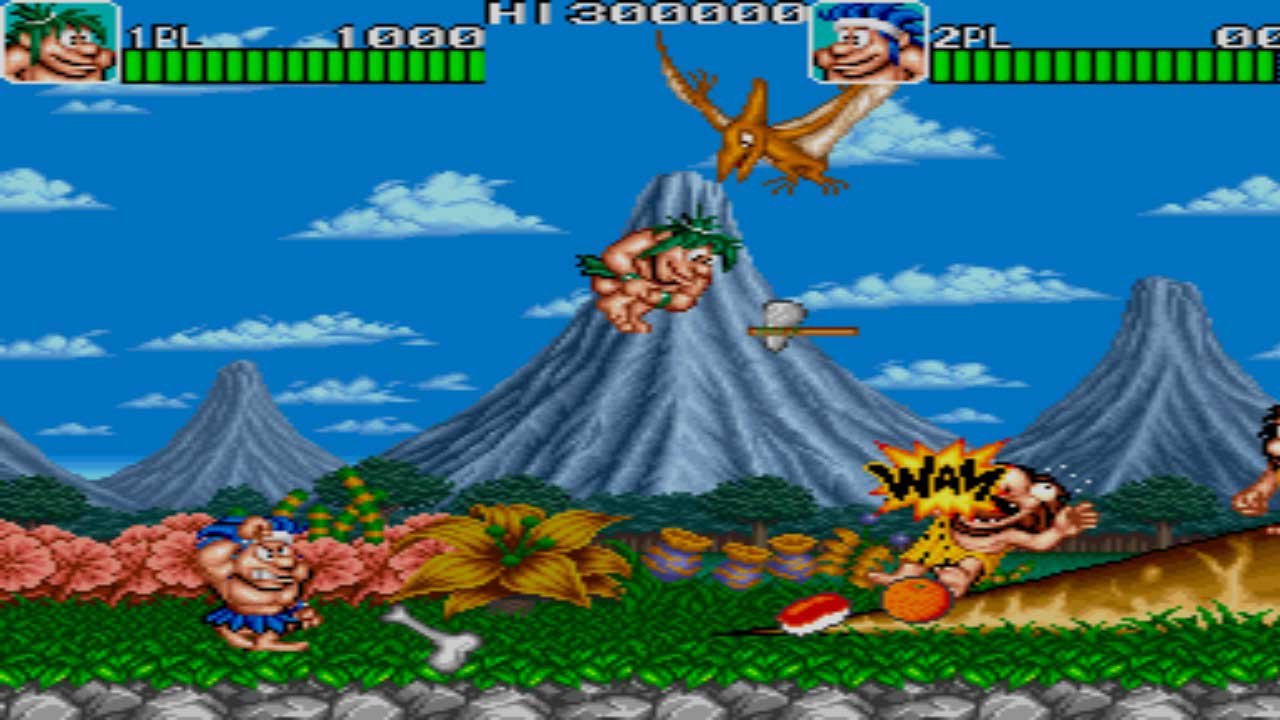 Joe and Mac plays as a sidescrolling action game, in which Joe or Mac have the ability to throw projectile weapons at their foes up to three times in a row before having a “cooldown” where they can only swing stereotypical clubs. This methodology is interesting but also a bit confusing, as the ranged weapons are infinitely more useful than the club and never give you a proper warning in the heat of battle when they’re about to need cooldown. You also have this pretty cool chargeup attack that allows you to utilize a massive version of whatever weapon you’re carrying (so basic stone hammer becomes big hammer, fireball becomes big fireball, etc.). These are handy for clearing a room, but they’re also one of the only ways to really deal with the stage bosses in any sort of good time. Since running out of health is a real danger, finishing the job ASAP is paramount, and the big attacks is the best way to do this.

Speaking of health, Joe and Mac seem to have some kind of condition where you need to eat constantly to stay alive. Sure, eating the food that gets dropped from various bad guys replenishes lost health, but you also just seem to gradually lose it, over time, simply from exerting energy, because you’re both so energetic you burn food like kindling. It’s kind of clever because it encourages you to remain in combat: you could, with fast fingers, run around a majority of the enemies, but then you’d drop from lack of food. Instead, you need to keep fighting and risking getting more damage in order to balance out the damage you’ve already received. Very clever, Data East, very clever.

Now, the game itself handles pretty well. Joe and Mac jump a good distance, handle well, have a fair amount of health and the weapon drops from pterodactyls holding eggs is generous enough. But you’ll notice something: I always say the two names together. It’s not just because the title of the game is Joe and Mac: it’s because this game is an absolute bastard for single player mode. When you fire up Johnny Turbo’s port, if you have the JoyCons undocked they will automatically assume that you’re doing two players. Naturally, since I had my kids around, I handed one to my daughter and away we went. She died, a ton, and so did I, and the imaginary quarters that we went through to maintain the game were numerous. But as long as one of us was still on the screen, the band played on. We made it probably halfway through the game (all the way to level four) in fifteen minutes or so, just from sheer brute forcing, and it was fun. The graphics were cartoony, the cavemen looked like Looney Toons accordions when rocks crushed them, and we beat on some jerk dinosaurs. Good times. 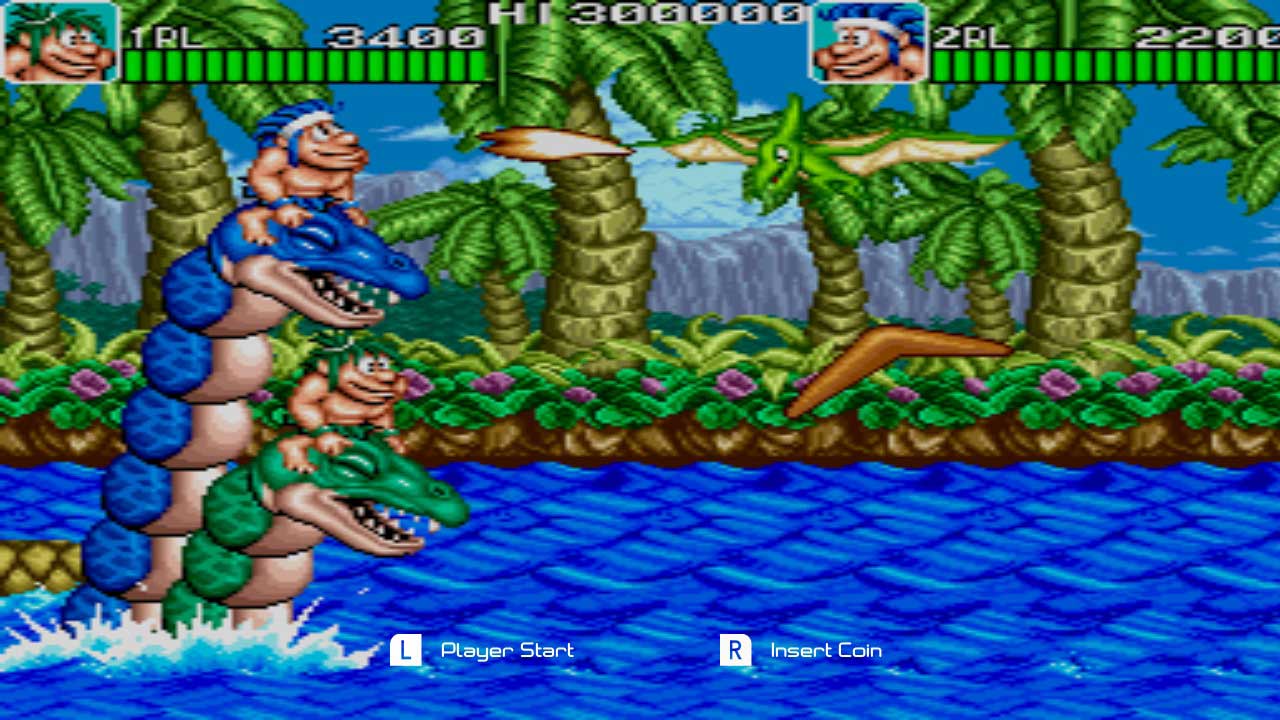 But when I played the game by myself, later, it was a different story. Now, suddenly, my life was incredibly important, even with my huge stack of coins. If I died, I had to respawn at a certain checkpoint to move on, and the enemies respawned with them. The hilarious waves of enemies were now frustrating, almost infuriating, with their inaccurate hitboxes and nonstop action attacks. When a boss killed me, the action stopped, everything got reset, and I went back from square one. To the creator’s credit, the boss health bars didn’t totally reset, but I still had that gutter feeling of starting over, even if it wasn’t totally from the top. When you’re only Joe or Mac, the fun goes out of it and the solo mission becomes a serious tesk of skill and patience.

Some players may find the arcade version to be a bit inferior to the SNES release, and for good reason. The levels are the original length, there’s no overworld map (other than a simple progress map) and the bonus games are totally gone. But the multi-endings still exist, and, technically, this is the truest representation of the real game. And, in Johnny’s defense, this is the stchick that Flying Tiger is going with: bringing you the arcade versions instead of the roms that you’re expecting Nintendo to provide at some point. It worked for Bad Dudes (which I found superior) it worked for Burger Time (VASTLY superior) and I think that Joe and Mac have legitimacy here, too.  It’s hard for a solo romp, but that just makes the co-op effect even better and more fun. You can laugh and enjoy it, and it’s something that, with a little effort, you can bang out in well under an hour. I’m just glad that I can finally stop trying to Beetlejuice this game into existence. Maybe I should start name dropping Mother 3 instead?