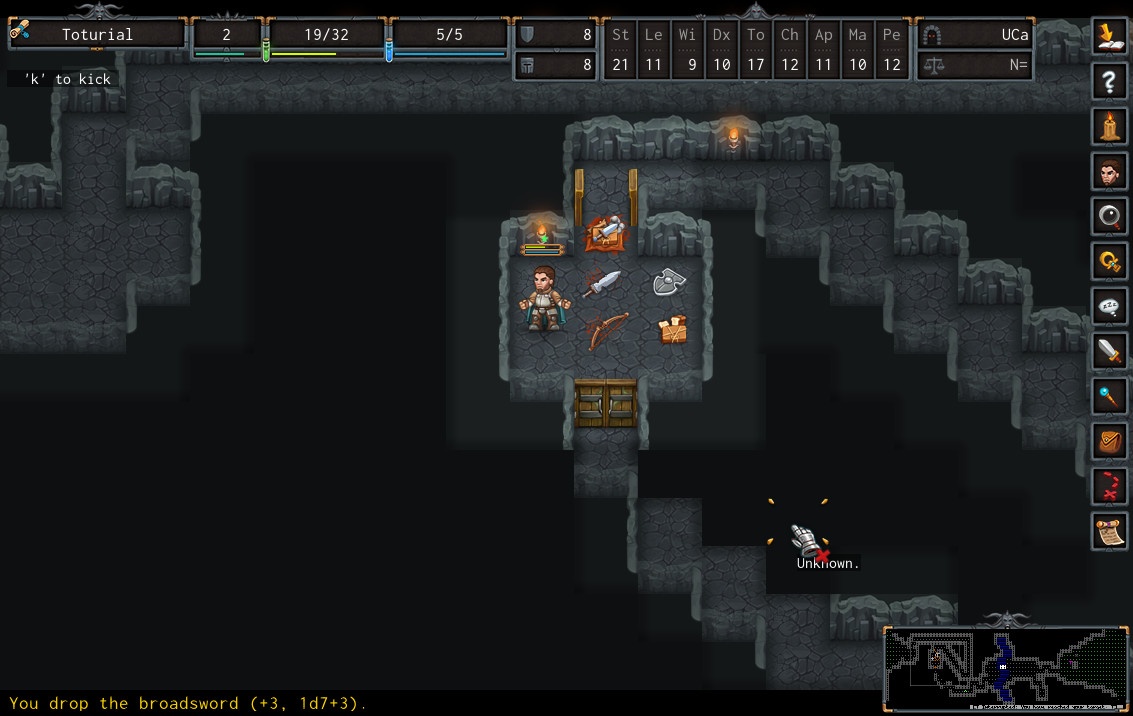 Have you ever taken a missed your stop  and found yourself in a completely unfamiliar area? On the way back from the green grocer or the local apothecary (because apparently this is 1800s England), you nod off on the bus and now you’ve arrived at a place never seen before, because you space for a moment. Suddenly you’re surrounded by homes, shops, maybe even full-fledged businesses you’ve never seen before in your life. Maybe never even heard of them in any capacity. But here’s the crazy part: you’re the stranger here. For these other people and places, they’ve known this for years, maybe even their whole lives, so why should anything be surprising? The people are friendly enough, sure, but that doesn’t make it any easier to adjust to this sprawling new land that exists just beyond your own perception. This long-winded analogy was definitely my experience with ADOM, Ancient Domains of Mystery.

ADOM is the tale of the land of Ancardia, a beautiful place that’s known 6000 years of peace that conveniently ends when you install the game. Now everyone’s caught in the Coming of Chaos, when beasts, demons and other bad things start sprawling out of a Chaos Gate. You, the foretold champion, will be the one to decide the fate of this world. Will you close the Gate and make things better? Will you decide to join Chaos and plunge the world into darkness? Or will something entirely more bizarre happen? All these choices and more are possible in one of the biggest damn games I’ve ever seen in my life.

And when I say big, I don’t mean Oblivion/San Andreas big: technically speaking, the map of ADOM is relatively small in comparison, and can theoretically be covered in a short amount of time. I mean that this game’s scope is absolutely astronomical. Set in an overheard, 3rd person dungeon perspective, ADOM follows all the greats in terms of idea and execution: Nethack, Rogue, Moria, all giving you a fairly straightforward goal and then going wildly off the rails when it comes to actually getting there. But, before we dive into things in full, I want to comment: Nethack always felt like it was big in the scope of what the player figured out they could do with a limited number of resources and being creative. ADOM is like the Lego World of oldschool roguelikes, because the possibilities seem ENDLESS. 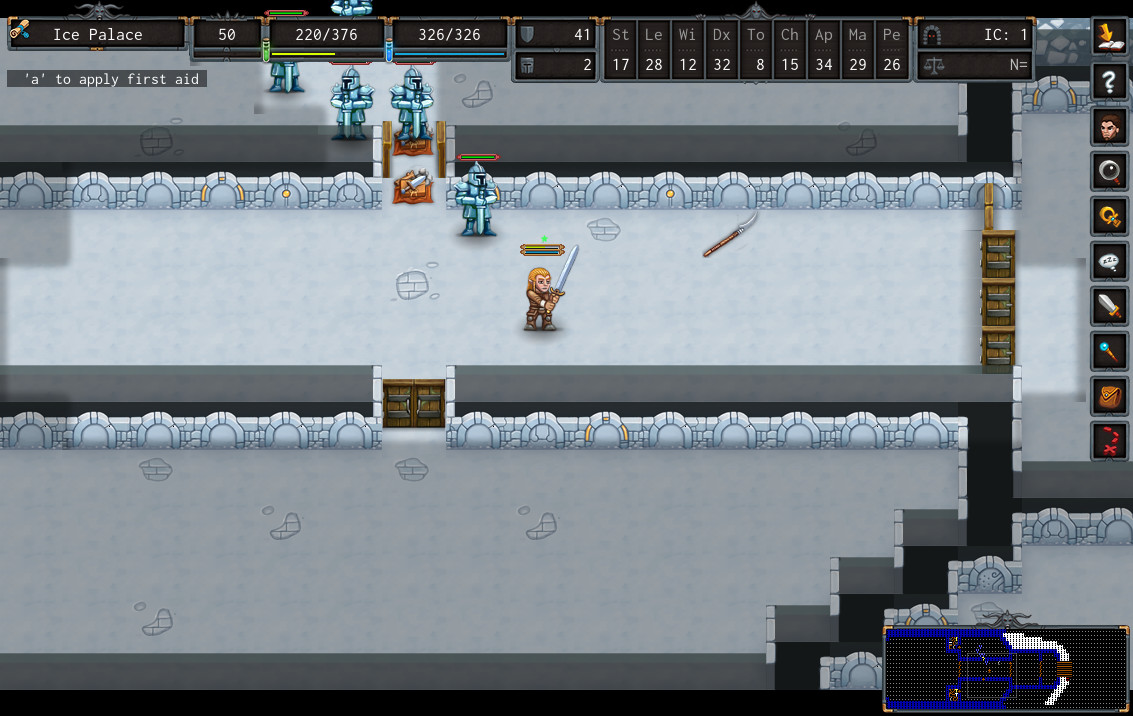 The game gives you only two choices for the tutorial to give you a basic idea of what you’re supposed to be doing (man or woman human), but, like so many other giant games, that is far from the only choices that ADOM offers. Once you get your standard bearings, you realize that every single run bestows random skills and attributes to your character a la Rogue Legacy, in which the background of even the most simple character is given in sweeping detail to justify why they are the way they are. I had a sixty one year old bard set out to try and reclaim family glory, and that didn’t even begin to make sense to me but it totally made sense. ADOM likes to give you a fantastic setup for even the shortest of runs, like a great DM or someone who is amazing at lying on the spot. Then, when you’re done with the tutorial and move onto the main game, things get real in terms of customization. Different star signs, races and classes open up before you with a huge amount of versatility, and, again, even the best combination of things (A Gnomish Farmer, brilliant!) can be hamstrung by a terrible backstory. And that’s all just before the game begins.

Once you dive into the game, it becomes clear that the theoretical path is clear: move through caves and villages, across rivers and forests, to find the Chaos Gate. But there’s so much that’ll happen between there and here. Maybe you’ll be attacked by a roving band of jackals. Maybe you’ll befriend a giant bear. Maybe you’ll accidentally piss of a God by sacrificing a kobold corpse on its altar. Maybe you’ll start growing a tail due to the permeation of Chaos, and maybe you’ll simply die, surrounded by more and more rats in a dungeon while thinking about how hungry you are. And all of those things happened in a single run. You can take a look at things from your own randomly generated run, set things to hard mode to carefully select and decide every detail of your play, and even compete in a weekly challenge like so many of the great roguelite games out there today. ADOM has taken care and time to incorporate a ton of material in, and it’s no surprise: as a game that was born in 1994, it’s nothing short of shocking that it’s come this far.

Additionally, yes, the game is available for free from the website, but there are a lot of reasons to grab the Steam version. Firstly, support the developer and get something in the process. There’s not currently a donate button on the site, and most folk are going to want their game purchase safely locked into the Steam cloud as it is. Secondly, the Steam version does have all those wonderful Steam goodies: trading cards, achievements, and being able to proudly show to everyone the hours that you’ve invested in this game. I’ve only put single digits in, which pales in comparison to the triple that a lot have accomplished already. But buying the game also combines one and two in a nice third package: making sure your friends see what you’re playing to death, get curious, and then get addicted as well. Everyone wins! 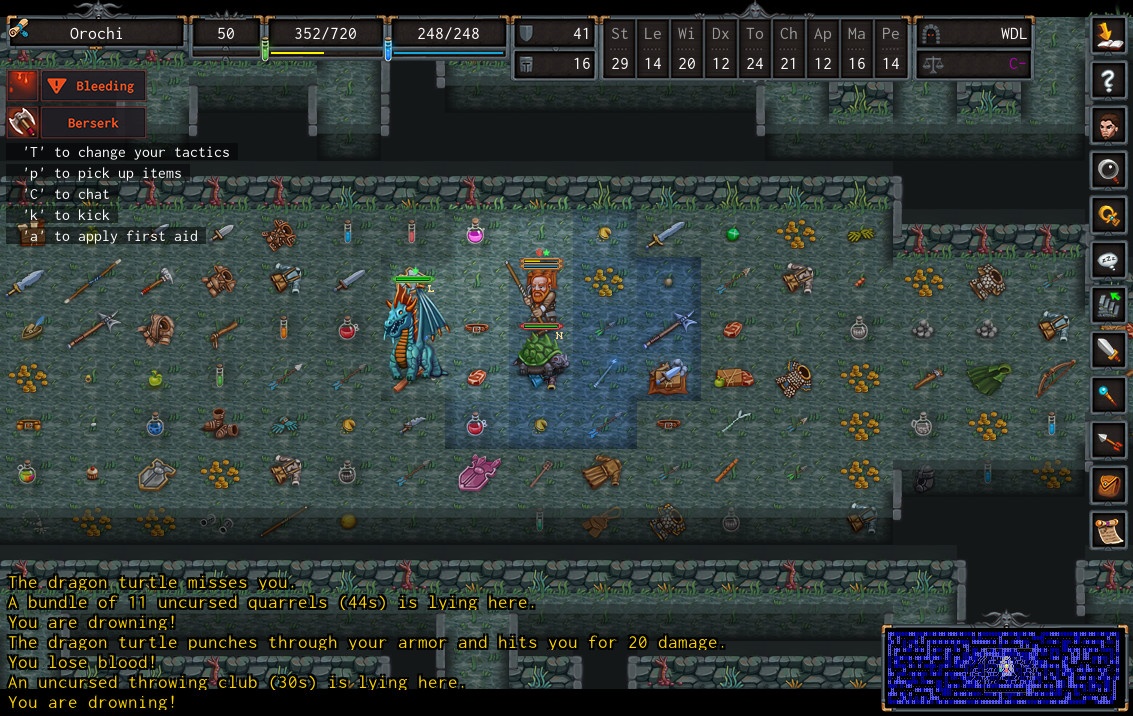 Now, ADOM is far from perfect. Sure, for fans of the oldschool roguelikes, it’s one of the best incarnations that you can find, because it’s fantastically large, deep and detailed. The latest build of Nethack is something like twenty megabytes, and ADOM comes in at just under a gig when extracted. As a result, there are a few nitpicks to keep in mind. You will need a slightly up-to-date system to run this best. It’s not a graphical thing, it’s a CPU thing: the game is creating and analyzing so much that I sometimes got lag and stutter just walking around. That’s also because ADOM uses real graphics and designs instead of ASCII (and it looks great, as a result!). This is seriously a case of both style and content, and ADOM does both with finesse and flair, but they ask you to hold up your end of the carnival tent as well.

Also, this game is DAUNTING for first time players to take a look at. A lot of people nowadays love being able to understand a game in the first couple of minutes and then master it from there, adding things on as you go. ADOM throws a lot at you at first, and then even more after that, and then even more. There’s no controller control here: you need the full keyboard and mouse, and you have to know the difference between uppercase and lowercase letter commands, chaining multiple keystrokes together, swapping between attacks, when to use spells and wands, not accidentally kicking the shopkeeper and getting murdered, etc. It’s a huge undertaking to get through the setup of the game, and for people who are unawares of the process it can be frustrating and overwhelming. It’s completely worthwhile, and the dedicated will be rewarded with a fantastic game, but that doesn’t make it easy.

ADOM is definitely a fine scotch in the world of alcohol based video game references. For people used to cheaper or sweeter tastes, it will seem bitter, heady and a bit too strong for their interests. However, if you’ve sampled many tastes over the years, you’ll appreciate the complexity and amazingly robust character, and you won’t want anything else as long as this is on the table. ADOM is an amazing game, both in longevity and scope, and should not be missed for the fans of roguelikes or D&D settings in general. Support the creator and get this game on Steam, you won’t regret it.