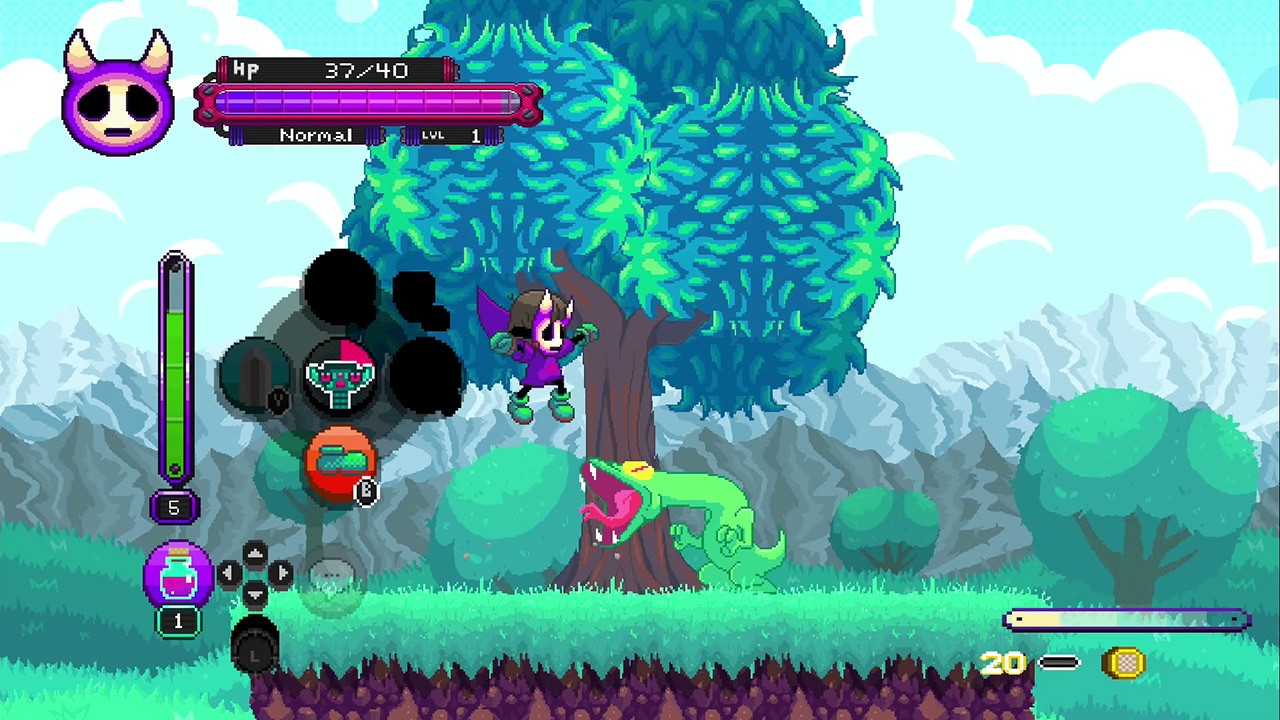 Turning the tables on the position of the hero is always a great way to get people on board and keep their interests. From the very beginning, people have thought about and wondered for the motivations of the villains and their sidekicks, because, let’s be honest, one dimensional heroes and baddies are boring. Mario and Bowser have such a complex relationship, but that’s because we’ve seen it grow and get conture to it over the decades (yes, decades, we are all old). If it was just still “He is a bad guy, you are a good guy,” then the franchise might have totally stagnated years ago. No, the antagonists and their cronies have special places in the world, and in the hearts and minds of some players. Paper Castle Games wanted to throw players for a loop, and, intentionally or otherwise, draw parallels with another indie title that made players think about their choices and actions. This is Underhero, and it was a doozy.

We start off with the traditional setup: the main hero is here to finally put an end to the big bad guy, named Mr. Stitches (alright, sure) and free the princess. All he has to do is get past three minions, all of whom are pretty sure they’re about to die. One minion, however, has a slightly alternative idea and decides that maybe dropping a massive chandelier on the hero might do the trick. As it turns out, this idea is excellent, and the nameless hero is crushed to death. The minion is immediately beseeched by the talking sword the hero was carrying (named Elizabeth) for safety and a hiding spot, which the minion inexplicably provides. Mr. Stitches’ reaction to his dreaded nemesis being defeated is…odd. Like, “kill the dude who told him and set the princess free” odd. Suddenly, the minion has a new task. The hero dropped three stones of power when he died, and the minion now needs to return them to their original boss owners. Minion is confused, but does what he’s told because, hey, minion. Something doesn’t feel right, and Elizabeth is hinting that there’s a much darker and stranger force at work here. You’ll find out all the twisted ins and outs of the story heavy, completely insane tale of Underhero as you go, but I’ll do my best not to spoil them.

Underhero takes a lot of big swings in order to make this particular game work. It’s an RPG, but it’s also a platformer with metrovania qualities. You’ll be exploring, back tracking, exacting careful manoeuvring on different terrains and finding out how minion fares in careful jumping and landing. There aren’t so many hazards out in the field, but there are plenty of places to misstep, secrets to miss and places that should be obvious but you end up skipping over anyway. There are maps that crop up every so often, but, like real maps, you sort of have to look at them, get an idea of where you are and then go from there. It’s not a perfect GPS tracking system, so you might occasionally get turned around. Also, there’s the matter of the whole game itself, which is having a minion go up against other henchmen and baddies. After all, they’re sort of drawn to the whole energy of Elizabeth (whether they realize it or not) and there’s always squabbling among the ranks. 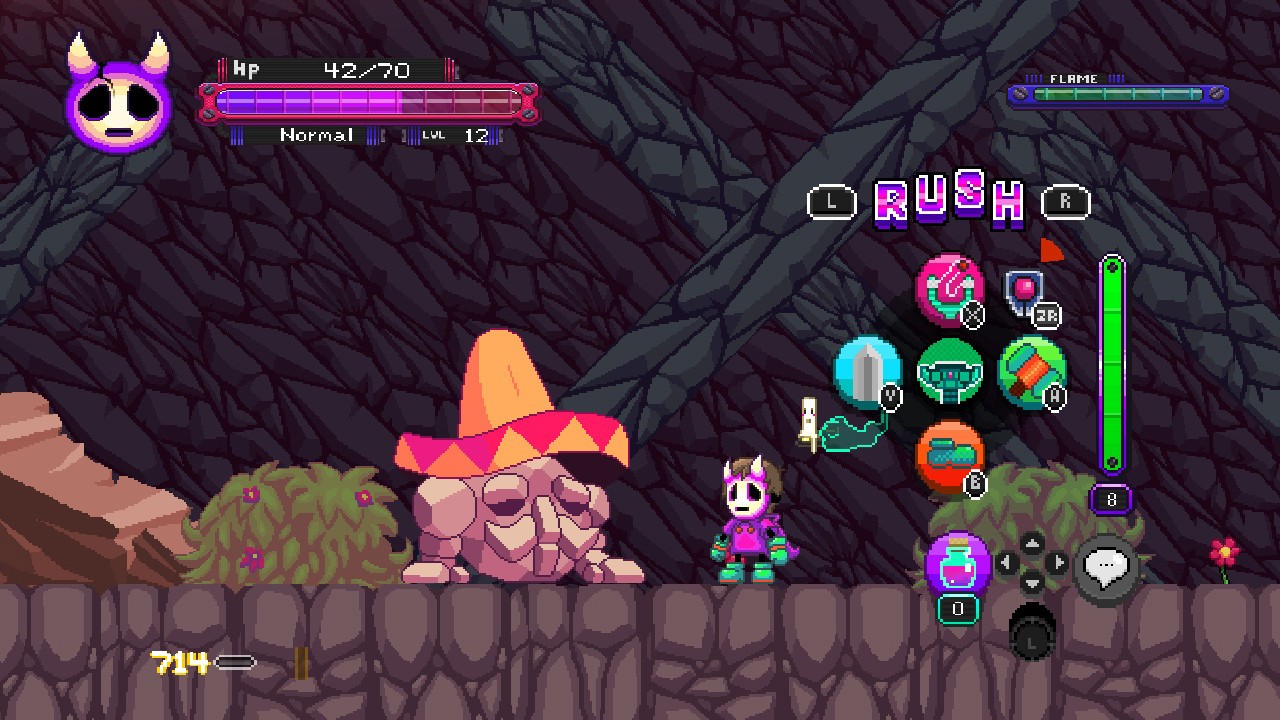 The combat of Underhero is probably the cornerstone of the gameplay mechanic side because there’s a ton that goes into it. Rather than be turn based, combat is focused on a recharging status bar that affects minion in a variety of ways. Attacking uses up stamina and using up too much at once renders him incapacitated. Having stamina means being able to dodge attacks, with successful dodges refilling the bar more quickly. You also have a shield that can block attacks, but this creates wear and tear on the shield and can eventually lead to it breaking. If you’re really good with timing, you can parry the attack, incurring zero damage to the shield or yourself and momentarily stunning the enemy. You can now attack, but try to attack in time with the music: it leads to stronger hits and better damage.

This aspect of the game feels very Paper Mario, and I don’t think the developers made any attempt to hide this inspiration. The quirkiness, combined with needing to notice tells and hints from the enemies as to what kind of attack is coming next (high, low, ranged, etc.) give you that whole feeling, and I’m totally here for it. But Underhero also takes the extra step to add something else: bribery. You naturally get money along the way, which can be used to buy potions and anvils and other goodies from the travelling salesman at the save points. But bribing enemies also adds another dimension: either weaker attacks on their part OR straight up just leaving you alone. Bribed enemies don’t give you as much EXP, but you do still get some and, frankly, it’s easier than having to work out the combat on occasion. Also, with no spoilers attached, there is a bit of a perceptual shift if you decide to go the pacifist route. This isn’t going to be something to the same degree of Undertale, so stop holding your breath, but it has a bit of an easter egg if you can pull it off. You should know, however, there are going to be times where you have to fight, full stop, so don’t think that your wallet can solve everything.

Underhero, straight up, looks gorgeous. It’s got that same level of high density pixel art that Owlboy was so popular for, but without the preamble of the devs telling everyone it took nine years to make. Instead, we’re greeted with a game that has a lot of colour variation, some amazing shading that comes from proper pixel placement and some truly unique and excellent character design. Minion doesn’t change much in the terms of his expressions (wearing a mask and all), but you do get a chance to see a whole range of baddies from all walks of life. From the treetops of the Moth Queen to the frosty loneliness of the Long Woods and the tropical paradise that is Pica Pica. The game is also balanced with a fantastic soundtrack that rewards the player with extra tracks if you’re willing to do some serious exploration. This is an aspect of the game I really enjoyed: while clearly sticking to some JRPG roots, Underhero openly defied convention by asking you to treat this game as an experiment, an opportunity to see what could be done with your own two feet and a little rebellious streak. After all, Mr. Stitches gave you explicit instructions on what to do, but what could hurt from venturing off the beaten path a bit? 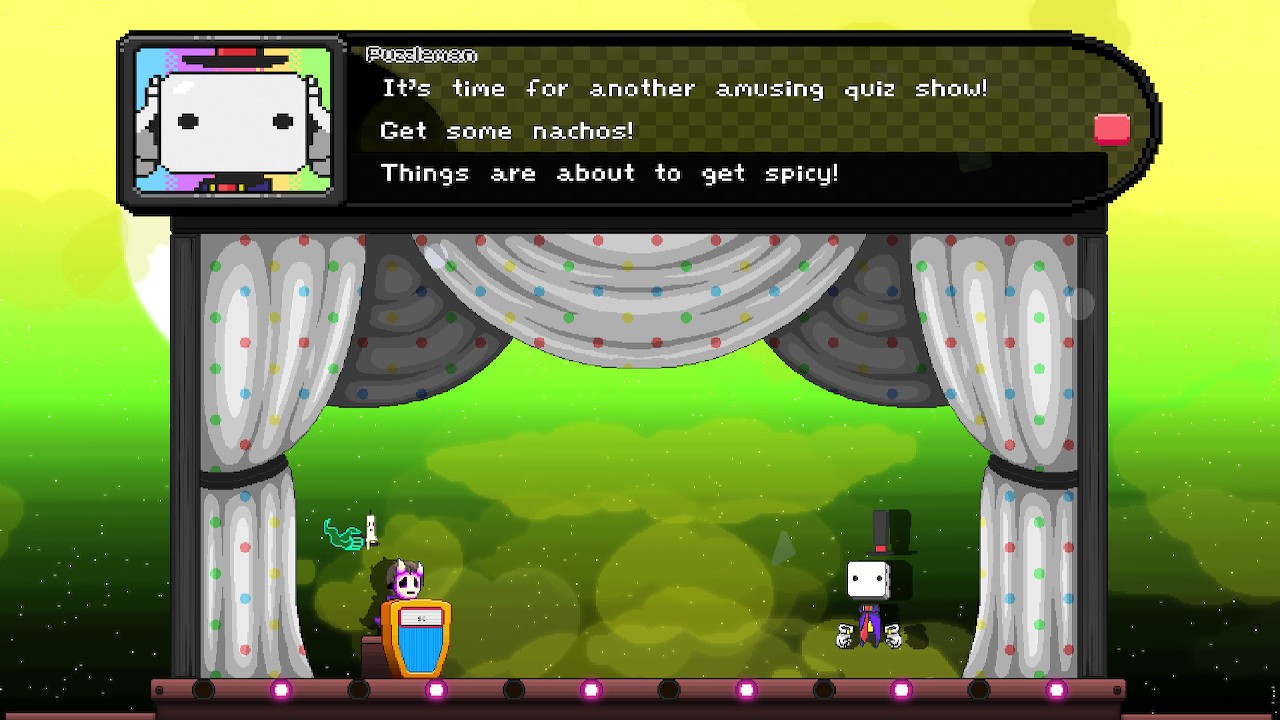 The way the tale of Underhero is laid out is what I really appreciated. From the drop, something stinks and feels odd, but you only really get an idea of what could be happening with a creeping, methodical slowness that invades your game world slowly but surely. There’s so much slapstick and madcap humour throughout, particularly when you take time to chat with everyone you meet (including those you engage in combat!) that you don’t realize there really is a sinister tone happening. After all, what on earth would possess Mr. Stitches to make you go out and reset the entire hero’s journey? What is the purpose of Elizabeth the talking sword hilt that made hiding her so necessary? And what the hell is up with the weird puzzle dude who keeps giving me quizzes on the road?? The game has so many twists and turns, so much genuine depth and heart that I was positively enthralled and really enjoyed this game. I had wanted to play it years ago, but it got swept away in the torrent of backlog, and I’m so glad the Switch port brought it back to my forefront.

Underhero has a bit of everything for everyone. There’s exploration. There’re tons of plot and plot twists. There’s completionism for those who need to hunt out everything. There are different ways to play the game (but only one ending, as far as I know). It’s got the tactile appeal of a platformer with the engrossing mannerisms of a great story, and it all lines up pretty fabulously with beautiful graphics and a great soundtrack. While it takes a while to get used to the concept, Underhero delivers in spades and will keep you locked in until the final reveal, which, I assure you, is quite the doozy.

Sometimes, we all rise to occasions we weren’t expecting, and Underhero reminds us that anyone can be the hero, depending on how you classify “hero.”