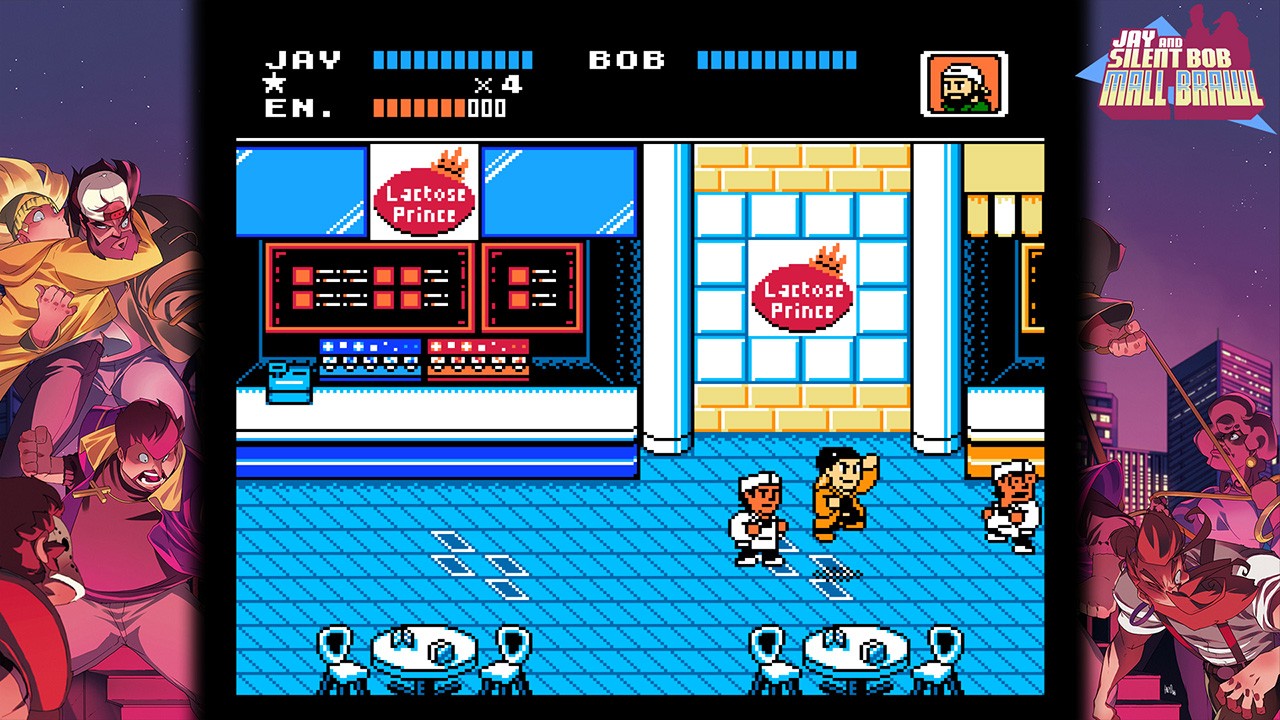 The Kevin Smith characters of Jay and Silent Bob were a big part of my teenage and college years, and I have pretty fond memories as a result. Their recurring comic foil helped to add some absurdity to Clerks, some assistive nonsense to Mallrats, and some surprisingly poignant insight to Chasing Amy. They were a massive part of the classic Dogma, and, regardless of what others say, I positively loved Jay and Silent Bob Strike Back (one of my favorite theatre experiences). I’ve fallen out of keeping up with Kevin Smith’s movies in recent years, which is a shame, because I admire him as a person and as a father, but I just never found time for Tusk, Yoga Hosers or, most recently, the Jay and Silent Bob Reboot. However, I was happy to hear that a new game would be heading down the pipeline, as Jay and Silent Bob being video game characters seems like a natural transition for the duo. While we wait for Chronic Blunt Punch to get finished, we can make time for this insane little piece of Jay and Silent Bob lore that has now come to consoles everywhere and, more specifically, to my Switch. It’s time for the tale of Jay and Silent Bob: Mall Brawl.

Jay and Silent Bob: Mall Brawl simultaneously exists as both a standalone idea, a prequel and a sort of tie in to the entire View Askewniverse. Similar to Curse of the Moon that helped to get people excited for Bloodstained, Mall Brawl is an 8-bit sidescroller that gets you pumped for the idea of a full Jay and Silent Bob game with a fantastic River City Ransom-vibe and, more importantly, filling in some blanks. At the end of Mallrats, Jay and Silent Bob sort of vanish and it’s alluded that they then have adventures with a monkey (which was the plot of Jay and Silent Bob Strike Back). However, how they managed to escape from the Eden Prairie Center Mall is never really talked about: after all, they committed some general mayhem that was bound to attract the attention of the local security. Thankfully, the scope of this game (and the upcoming Chronic Blunt Punch) go beyond the realm of just a movie tie in (especially for a movie that’s 25 years old), and players can enjoy a grand little adventure even if they haven’t watched the movies before. 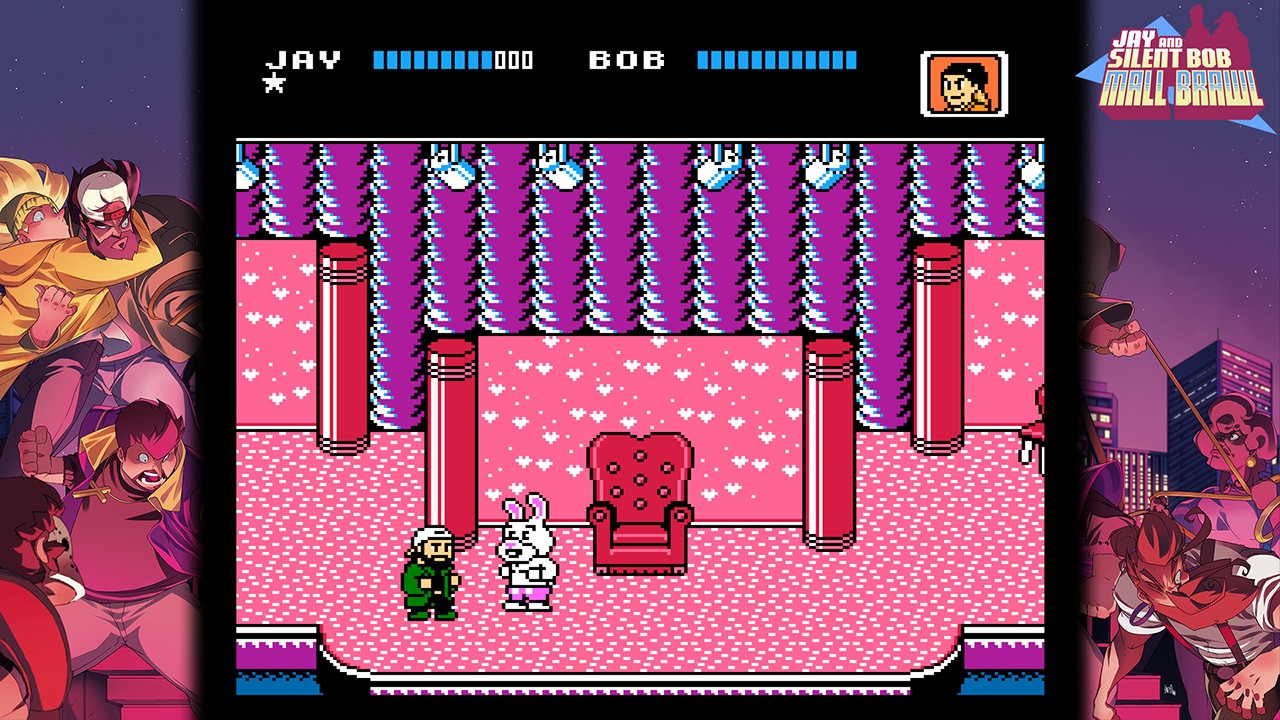 Now, Jay and Silent Bob: Mall Brawl does live and die on two main ideas: the characters and the retro feeling. Chances are, if you’ve never watched a Kevin Smith movie, there’s no way in hell this game is going to be the pivot point that gets you into the entire back catalogue of movies. Jay and Silent Bob are well represented in tiny, Kunio-Kun-esque sprites, and the game is charming in its own right, but there isn’t a thing about it that’s groundbreaking. You move side to side, you have to beat up enemies as they appear, and you can’t move on until you’ve dealt with the mall slackers, obstantant rent-a-cops, masked hockey hooligans, skateboarders and other such truant mobs. Hell, even the enemies that I’ve just mentioned are part of the entire aesthetic of Jay and Silent Bob, and, as such, might feel totally strange as what you would be fighting in a normal sidescroller. Then again, that’s sort of the point, isn’t it?

That’s not to say that Mall Brawl doesn’t bring a bit to the table. The atmosphere is certainly on point, allowing players to undertake the journey as either a single entity or bringing in a buddy to fully recreate the dynamic duo. Interbang and Spoony Bard have certainly nailed the retro aesthetic of the game, producing a chiptune soundtrack that feels like it was lifted straight from the Konami vault of the mid 80s and dropping it into a game that actually looks and feels better with the optional CRT filters applied. I really enjoy a good retro inspired game that can fool me into thinking it might have been released on the NES years ago and I just never noticed it. Then again, the groups that designed this precursor game wanted to make sure it would function on the NES (Limited Run Games is doing a gorgeous cart that was available for pre-order), so authenticity was key so that they didn’t create a game that the aged hardware was unable to use. 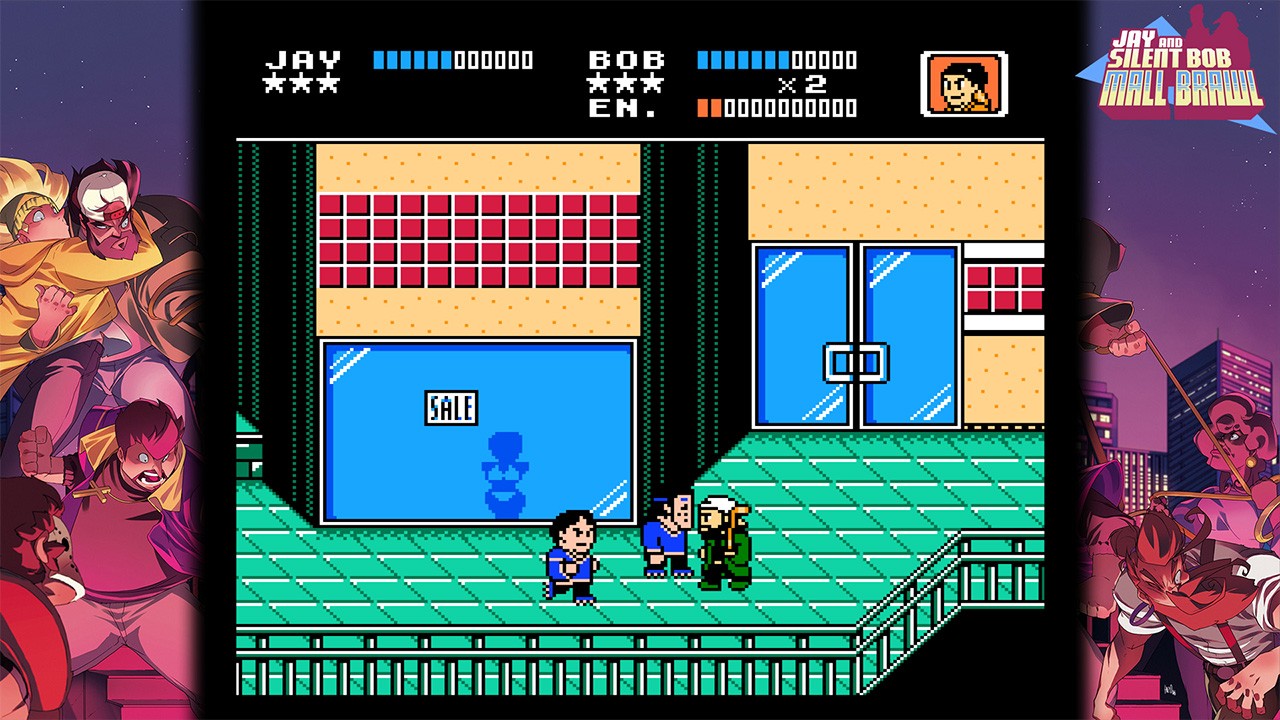 As a sidescroller, Jay and Silent Bob: Mall Brawl is competent and enjoyable. Single player mode allows you to start as either Jay or Silent Bob, and there’s really only two buttons to consider: jump and hit. Landing successive blows can unlock a combo attack that creates a flurry of activity that can draw in other enemies who might be too close. Enemies will carry a series of weapons (bottles, hockey sticks, skateboards) that can be picked up and used against them if you manage to knock them down, and they’re surprisingly powerful and enjoyable. Food items are hidden inside of trash bins and random boxes can help to replenish your health, though it comes with the caveat of, well, eating trash food. Additionally, getting knocked out isn’t a surefire game over sequence. When one falls, the other comes to take their place, meaning that Jay can be tapped in when Silent Bob has taken too much punishment. However, this isn’t an unlimited save state: you need to progress between at least a couple of battles before the second character is healthy enough to come back in. If both Silent Bob and Jay get knocked out in the course of a single matchup, that’s the end of the show, folks. This also means that you don’t always have that save waiting in two player mode: watch your buddy and be a good support.

Naturally, with the limitations of 8 bit coding, there comes some fallacies that were natural with this generation of games, and it can be annoying for players. With Jay and Silent Bob: Mall Brawl, the hit boxes for enemies can be hard to pinpoint as they move around the full course of the screen. There’s a chance to grapple an enemy and apply the smackdown in a satisfying mano y mano style, but it almost seemed random: I couldn’t quite figure out how to properly engage the enemy and set this off. Additionally, those cool weapon drops that I just mentioned? They only stay for the course of that single matchup. As soon as I was done laying waste to the thug who brought the beer bottle, the bottle vanished before I moved onto the next screen and fight. I sincerely wish that I could have carried weapons between brawls, or at least had a usage counter on the weapons beyond “hit this one guy till he disappears.” It’s a tad disappointing, and it sort of takes away from the potential excitement of planning. Oh, and those little tiny dudes who run around and jump kick you are annoying.

But, at the end of the day, Jay and Silent Bob: Mall Brawl does plenty right. It’s got that solid nostalgia feeling with some great humor baked in with both character sprites and the story bumper between chapters. Being able to have a save slot that lets you revisit progression without needing to do it all in one go is great, and deleting old saves is simple enough. It captures the feeling of both having a classic 8-bit brawl with your buddy while hyping you for another game that will be coming someday soon, and it’ll be even bigger and have more snootches for bootches than this one. This game makes House Party look like House Party II, and I say that with the confidence of someone who watched Clerks II and didn’t totally hate it. If you’ve got NES in your blood and care about Morris Day and the Time, you’ll love this little jaunt.

While it’s a bit of fan service cooked around a pretty simplistic premise, Mall Brawl still delivers on fun and form within this homage to the NES fighting era.