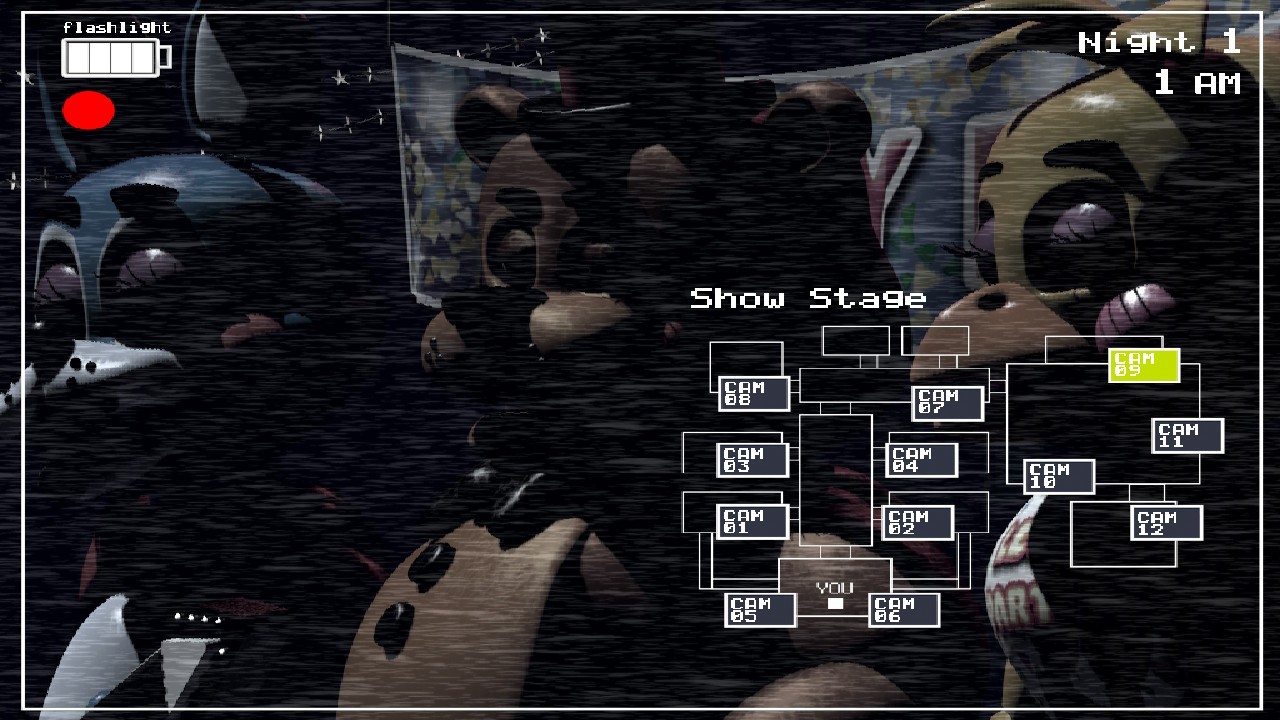 For many people, Five Nights at Freddy’s 2 is where the game series began to take a serious upturn, which seems like a very pompous statement to make about only the second game in the series. However, prior to this, remember that Scott Cawthon had made the first game almost as a response to criticism of another game’s design. Five Nights at Freddy’s could have been a one and done, but the second game was the beginning of the machine that we know today. After its release, the website disappeared, we started teasing the third one immediately, and people began to realize that a lot of the insane fan theories might actually hold some weight. Additionally, this is where the game really starts to go off the rails in terms of gameplay facets, so hold onto your hats: it’s time for a second night at Freddy’s.

Plot is an important part of Five Nights at Freddy’s 2, so try and keep up with the bouncing ball here. You’re, once again, a nameless dude (that eventually gets a name) who is taking over the security job at the infamous Freddy Fazbear’s Pizza, and, once again, the robots are roaming at night and kind of homicidal. You get the news that the robots have been updated to not attack children, but what the hell good does that do you as an adult watchperson in the middle of the night? A vast majority of the information you receive seems disjointed right up until the end, so if you really want to know what the hell is going on you need to make it to the sixth night’s end. If you make it to the 7th night, it’s totally inconsequential and has the same joke ending as the first, so don’t worry unless you’re a completionist. 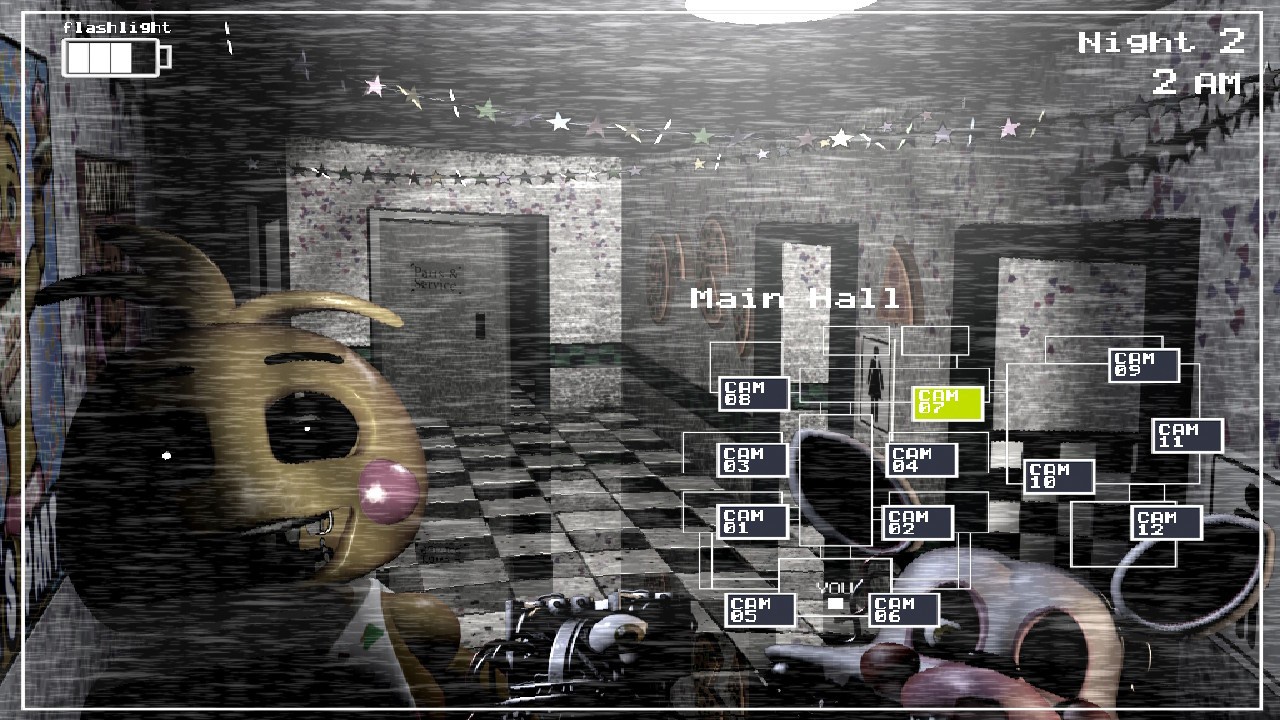 Coming into Five Nights at Freddy’s 2, you’ll notice that there is an upgrade to the graphics, making the animatronic beasts somehow more believable and scarier in the same breath. Also, your office is both better and worse, so that’s something to keep in mind. Security cameras and hall lights have unlimited power, so that’s a good thing, but now you can’t close the doors, so no dice winning with the unlimited power unlock again (the Unlocks are back for this second game). Your flashlight, which is needed to specifically scare away some robots, does NOT have unlimited power, and it’s the same sensation as trying to pull the trigger at an oncoming boar only to realize all your bullets are used up. Plus there’s a music box that needs to be manually rewound time after time to prevent a certain Marionette from coming and murdering you in your office, so that’s another ball in the air. Oh, and, since you can’t close the door, you need to don a Freddy mask to convince some of the robots that you’re one of them, but it won’t work on Freddy himself, who will see you as a pretender to the throne and destroy you posthaste.

The second game, in my opinion, has a more frantic gameplay feeling to the survival aspect, but is still somehow quite manageable and enjoyable in the right context. For example, once you get into a good rhythm of checking your corners, knowing when to put on the mask and when not to, and constantly rewinding the music box, you might even feel like this game is easier than the first one. Most of the animatronics in Five Nights at Freddy’s 2 will give you a split second to don the mask before you get slaughtered, and, if you’re too quick on the trigger, putting the mask on and defying Freddy will get you rightfully killed. It’s twitch gaming taken to a new extreme, and one that works exceptionally well on the Nintendo Switch. As you have buttons designated to all the different spots, you might find that you can play this one even more fluidly than you could on the PC, simply because it becomes more intuitive. That’s something I really enjoy about these ports: the effort that went into making it a good experience overall.

However, players are going to want to get killed a couple of times to better understand the game. Five Nights at Freddy’s 2 is the birth of the bizarre “8 bit mode,” where seemingly inconsequential minigames are introduced after death to better showcase the world where Fazbear reigns and the robots that kill people are somehow accepted. By allowing your failures to better expand the storyline, players feel more connected to what is happening and also how it came to be. Being a successful, fast and smart player just means you get the surface level, which, arguably, has a lot to it. But the minigames expand upon the world, and you see more about the potential of haunted bots, and a lot of the details that help to set up the third game. It’s world-building, and it’s not something you would necessarily expect in a game that’s all about making you scream as you play. 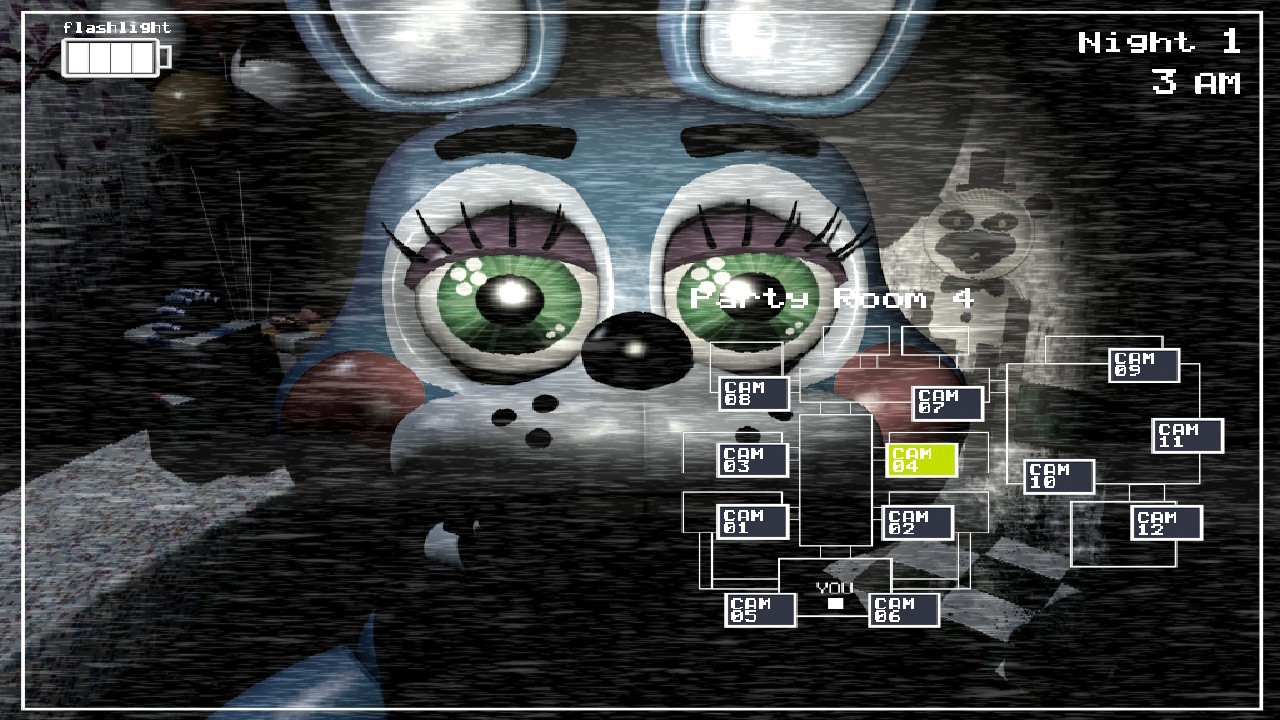 Much like the first game, Five Nights at Freddy’s 2 is ultimately limited by a players interest in how the game plays and challenging themselves. Once you get through six nights and unlock the Custom Night, you don’t have many places to go. Yes, this is a different beast than the first one in terms of adding more variables and making sure that the cheat mode doesn’t make the game too easy, but you also can end up doing the full week of plays without worrying too much about variance or needing to start over. After the third night, you’ve gotten a good idea of what you need to accomplish, and you just need to do it harder and faster. I don’t think that it is too difficult, so, as a result, I have very little incentive to revisit the whole storyline. Hell, if I wasn’t so intrigued about how the game would play out with the Switch, I may have skipped this chapter altogether. Sure, it’s a good step up from the first, but it’s hardly a new idea, and it doesn’t deviate enough from the original source to call it original, so anyone with the PC version who isn’t a massive FNaF fan will sleep perfectly well at night having skipped this one.

But chances are, if you’re reading this review, you’re interested, and that means you really should consider getting it. The campness from the first one is a bit more flush and saturated with genuine moments of terror and suspense. When the music box stops, you barely have enough time to realize how screwed you are before death comes, screaming, at your doorstop. The looming figures of the animatronics are deeply unsettling, far more so than the Banana Splits Movie (which is camp trash, but fun trash nonetheless), and can put you into a panic. The soundscape is richer, the graphic details are better, and the controls are still tight and demanding in the face of doom. If you like the first one and want to know where the series is going, it’s well worth the price of admission for Five Nights at Freddy’s 2. Just remember the sense of relief once you finish this title.

The 2nd in the series, this jumpscare management game adds new, complex variants to the table & begins to explore the dark world of Freddy Fazbear in earnest.