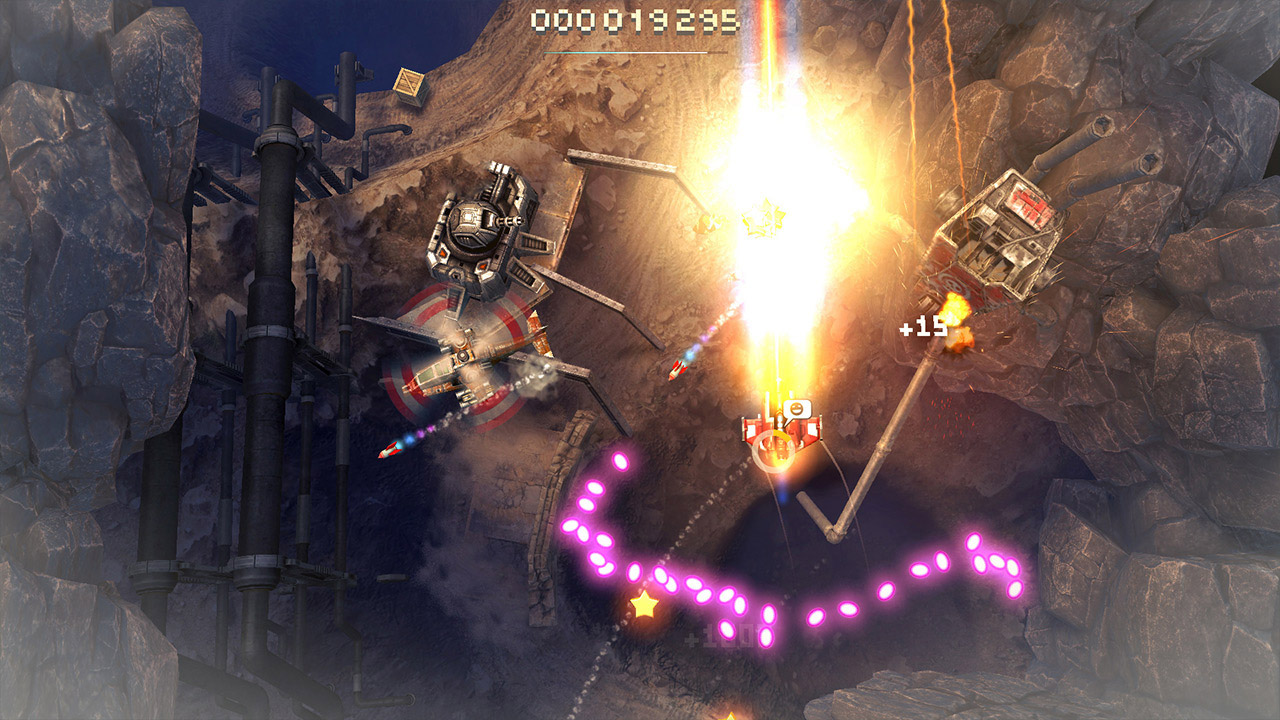 The Sky Force series takes the vertical scrolling arcade shooter and attempts to bring it fully up to date for the modern mobile and home gaming market… for better or for worse! As a member of PlayStation+ I had the privilege of trying out the previous entry in the series a few months back for free, ‘Sky Force Anniversary’. As such I can confirm that ‘Reloaded’ is a sequel that uses exactly the same engine, structure and system of progression as its predecessor. So if you’ve played ‘Anniversary’ before I can assure you that other than the stages, very little has changed. It’s just more of the same good stuff. However, for those of you who are completely in the dark regarding the ‘Sky Force’ series, here is a break down.

Sky Force Reloaded is a pretty straight forward arcade shooter with a modern military war theme. You command some form of fighter jet and fly over land and sea destroying squadrons of planes, choppers, tanks, buggies and a whole host of extremely heavy artillery. Think ‘1942’, for the modern age with 3D graphics, decent vehicle models and detailed terrain textures.

What makes the Sky Force games unique is the implemented system of progression that has been largely influenced by mobile market games. If you are familiar with the arcade shooter genre of games that inspired ‘Sky Force’ then you would expect something with linear stages. It also wouldn’t be unreasonable to assume that you would be sufficiently kitted out for any and all challenges when it came to fire power. Sky Force however takes a different approach. 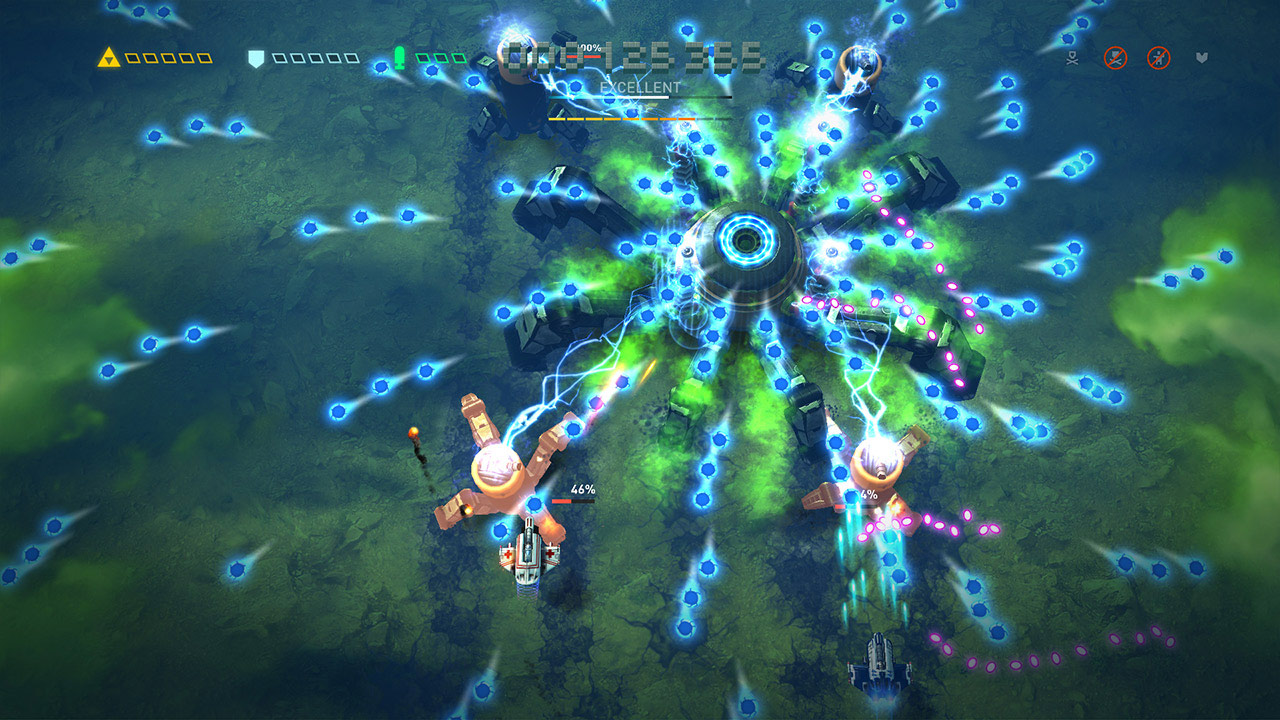 When you first switch Reloaded on you instantly jump into a short prelude where you take control or a fairly competent war plane with multiple guns and some decent fire power. Within minutes your ship will get destroyed which leads on to main campaign. Now, when you begin stage one you’ll be in control of a brand new ship with no upgrades, no shields, no side cannons and no lasers. In fact, the only fire power you have is a slow, weak, pea shooter which may just be enough to get you through level one, but no further than that. The opening is reminiscent of Castlevania: Symphony of the Night, where the main protagonist storms Dracula’s castle with his full arsenal of weapons and upgrades. However after ripping through a few corridors all your powers are stripped away, leaving you to fight with just your bare hands.

Stars fall every time you destroy enemies, and these can be collected and used as currency. Between stages you can spend stars which slowly upgrade your craft. There are several categories to pick from such as main cannons, side cannons, health upgrades, shields, laser beams, etc. These upgrades are purchased incrementally and increase in price as you buy.

There are 15 stages in total with one primary objective and four secondary ones. To advance to the next level you simply have to reach the end and beat the stage boss without dying. However, in order to upgrade your craft quicker there are benefits to beating the secondary tasks. By beating a stage while destroying all other enemies, not taking damage, and rescuing all the hostages (not strictly in the same attempt) you’ll unlock harder difficulty modes. The harder the difficulty, the more the stars are worth. By repeatedly playing stages that you’ve previously beaten and working your way up to the harder difficulties, you can build your craft up quicker and become strong enough to advance through new stages. 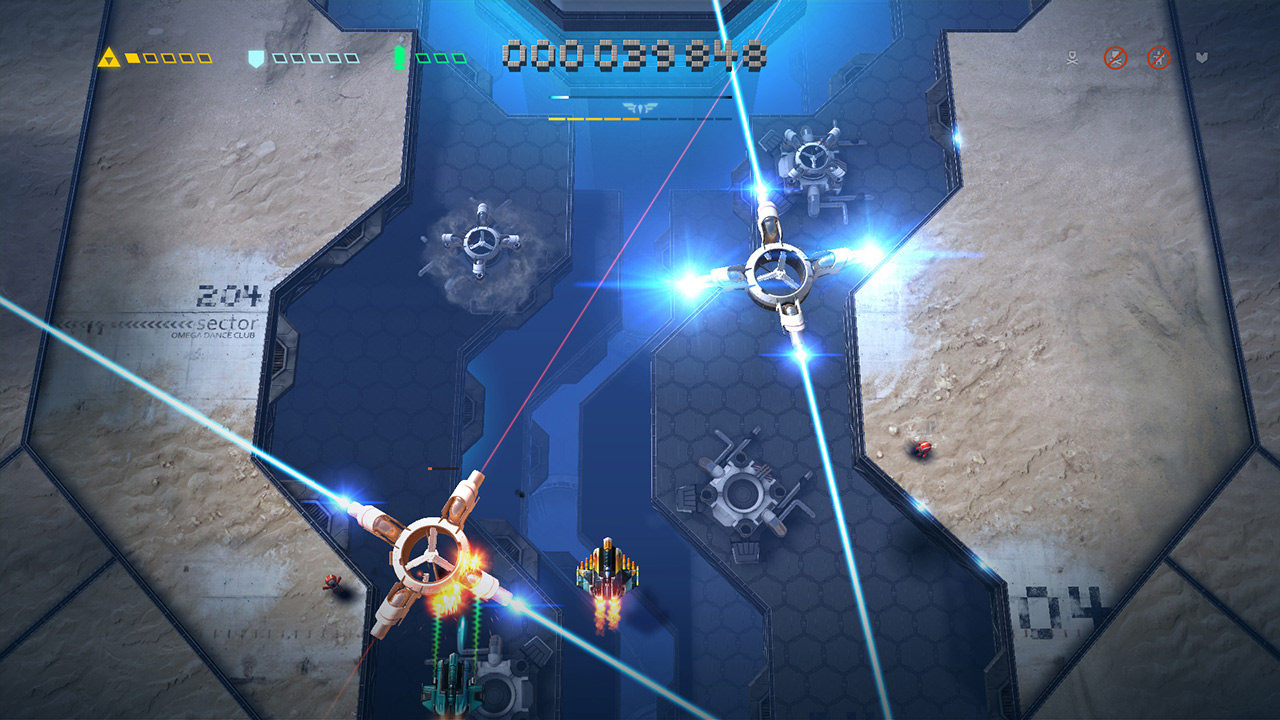 The graphics are unusually grounded and ‘down to earth’ for this style of shooter. A lot of the textures are really authentic with detailed terrain that doesn’t seem to tile or repeat, or at least not obviously. On top of the terrain are 3D models and set pieces such as destructible scenery. Overall this game does look decent, but it’s nothing too elaborate. I think I would have preferred something a little more stylized rather than authentic, but that is just a personal preference.

The controls are very simple and user friendly. Both the D-pad and analogue stick can be used for movement and the face buttons are used to shoot. There is nothing complicated or intricate about the game play. In fact it’s very straight forward and actually quite relaxing for a shooter. Due to the repetitious and grindy progression system it doesn’t require a great deal of concentration. It’s one of the games I set aside for catching up on news, audio books and podcasts with, as it keeps me occupied without requiring too much thought.

In summary, much like Sky Force Anniversary, Reloaded is a decent enough shooter, all be it very repetitive in nature. If you’re in the mood to kill several hours with something that’s not too mentally demanding then this is certainly a title worth considering.