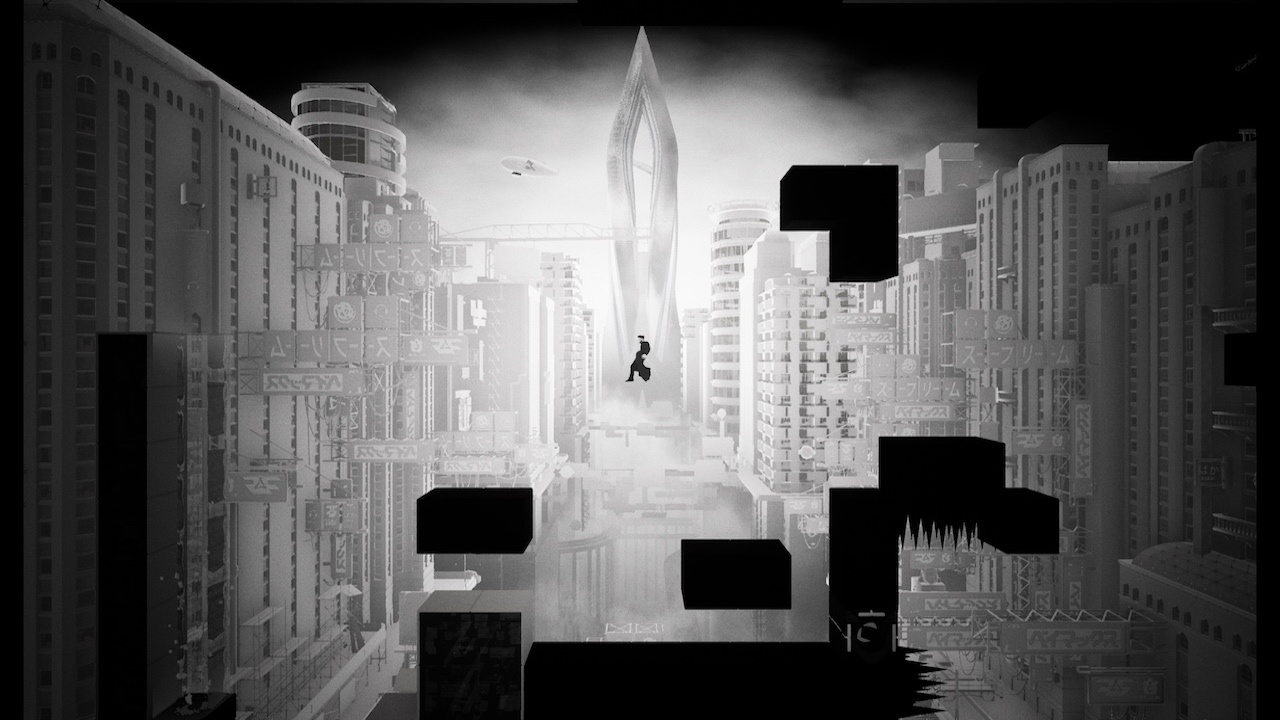 Dystopian future games seem to be the theme of the year – aside from battle royale – and the latest addition to the ever-growing list is Quantum Shift from the developer Fishing Cactus. The game kicks off by a female AI welcoming you to the latest trending app for the public. When you live in a cyberpunk dystopia, why worry about the outside world when you can jack in to “the Shift”. You get transported into a greyscale world with a fuzzy TV filter. It pulls off the style very well.

You play as an adult male who could be a descendant of Neo with his sense of clothing and parkour ability. You have the ability to run, jump with “B”, hoist himself up ledges and push and pull some items with “Y”. For a platformer, pretty straight forward stuff, but it has one trick up its leathery sleeve. Hitting “A” (or one of the shoulder buttons) on most floors will shift you into the negative space. The world around you flips upside down and you are left standing on the space that was previously the floor in the positive space. This feature is used very well when it comes to completing levels. It makes for really fun and brain bending puzzle solving to get to the door. It requires you to think in two plains of being and death is as easy as falling onto some spikes or mistiming a jump into spikes. There are no “lives” to worry about so feel free to retry the levels as many times as you wish. 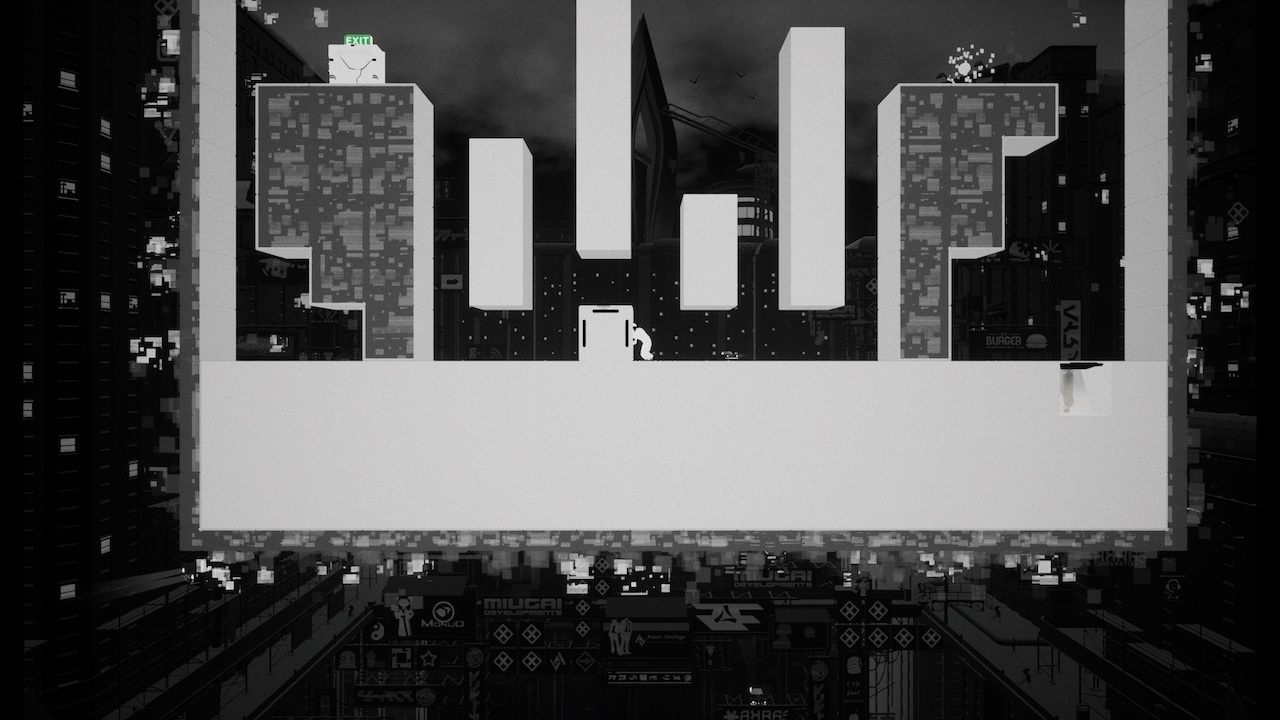 With 117 levels, some will be similar to each other but that’s not saying they get boring. Without giving anything away, there are more colours than just the greyscale world you start in. the story is well told despite the lack of dialogue. Games are getting better and better at telling impactful and meaningful stories. The story is told using the games beautifully minimalistic aesthetic. Speaking of the aesthetic, dominated by greyscale and TV fuzziness, it is very pleasing and never straining on the eyes after long sessions. Your character is quite small on the screen but is very well animated with littlest details going unnoticed for most of the game and only showing themselves in little bursts. The levels themselves are very minimalistic, but the background is something straight out of Bladerunner with a whole world going on. Flying cars whizzing by, street lights flickering, it just shows the level of detail Fishing Cactus put in their game. It’s not every day you find a game with the same attention of detail going into the background as the levels themselves!

The music is something to behold also. It follows the minimalistic approach of the visuals but is a great use of ambience in-game that is full of it. The two composers, Volkor X and Simon Felix, seem to be competing throughout the entire game with each track topping the last. This is definitely a game to play with the volume maxed out. 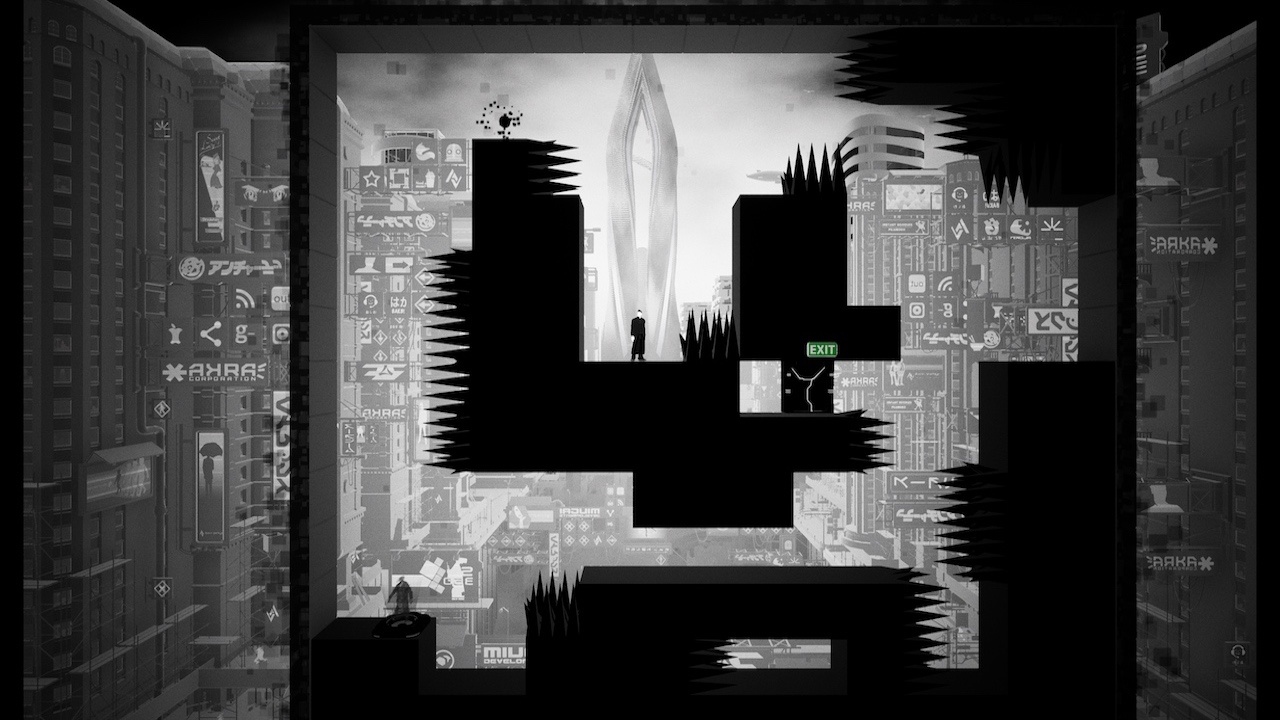 Once you complete the main story and still wanting more multidimensional puzzles to solve, there is still a few things you can do such as the level editor. It is very easy to use and makes for a fun challenge for mates. You can also share your creations online, making it a dystopian Mario Maker if you will.

In conclusion, Shift Quantum is a unique take on the dystopian future genre, with its enjoyable puzzles and aesthetically pleasing styling, it is a game I will be happy to come back to give the brain a work out. The story, although can be interpreted in different ways, is very well told through the stylings and lack of dialogue. While the ending wasn’t quite what the hero was expecting, the journey there was well worth it.