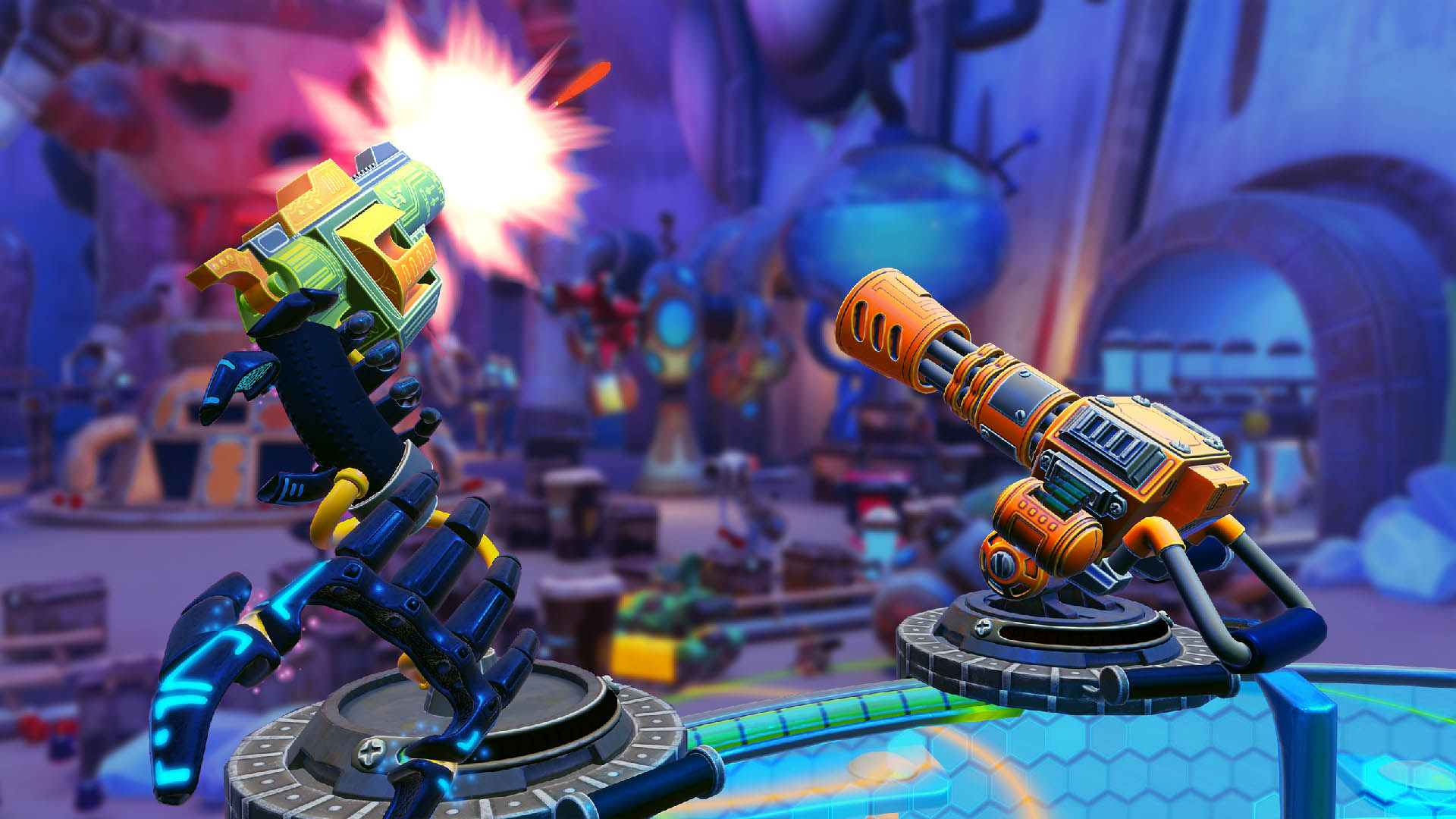 Before diving into this review I want to admit that I went in with my mind already made up. I so wanted to like this game for many reasons. First of all Spuds Unearthed was supported by crowd funding – always a huge plus in our books as it means that innovative games are still possible, even if you haven’t got the backing of a billion dollar publisher or development studio. And, perhaps the most superficial reason was that the game made me nostalgic for the beautiful mayhem of the Worms series. I mean spuds kind of look like fat worms, right? Well, as I said I wished, prayed and hoped that I would like Spuds Unearthed and give it a shiny gold star for its efforts. Sadly….Ok, I’m not saying I hated Spuds Unearthed. No, not by a long shot. You see the opposite of love isn’t hate. Hate is a powerful emotion just like love. The opposite to love is indifference. And I have to admit a certain amount of indifference to this game. Let me explain.

On booting up Spuds Unearthed you’re immediately presented with slide after slide of instructions on how to use and control certain aspects of the game. Fourteen slides to be exact. Now I’m not claiming to have ADHD or anything bordering on a problem with my attention span. But fourteen slides? And do you know what? Not one of the fourteen slides bothers to explain any of the context of the game. There’s no attempt to explain what the game is about, who the good or bad guys are and why you should care. Nothing. I later found out that the premise is that you’re a race of potatoes (if you’re asking why potatoes, I guess the only sensible answer is ‘why not?’) and you’re locked in mortal combat with another race of naughty potatoes called Zombuds.

To start the game you adjust your loadout, scan your hand into a scanner device and then you’re taken to a place with planets of differing sizes floating by you. You pick up a planet, put it down on a scanner-type device and it’ll give you some info about the planet. From what I can make out, the smaller planets are easier battles while the larger ones are much tougher. 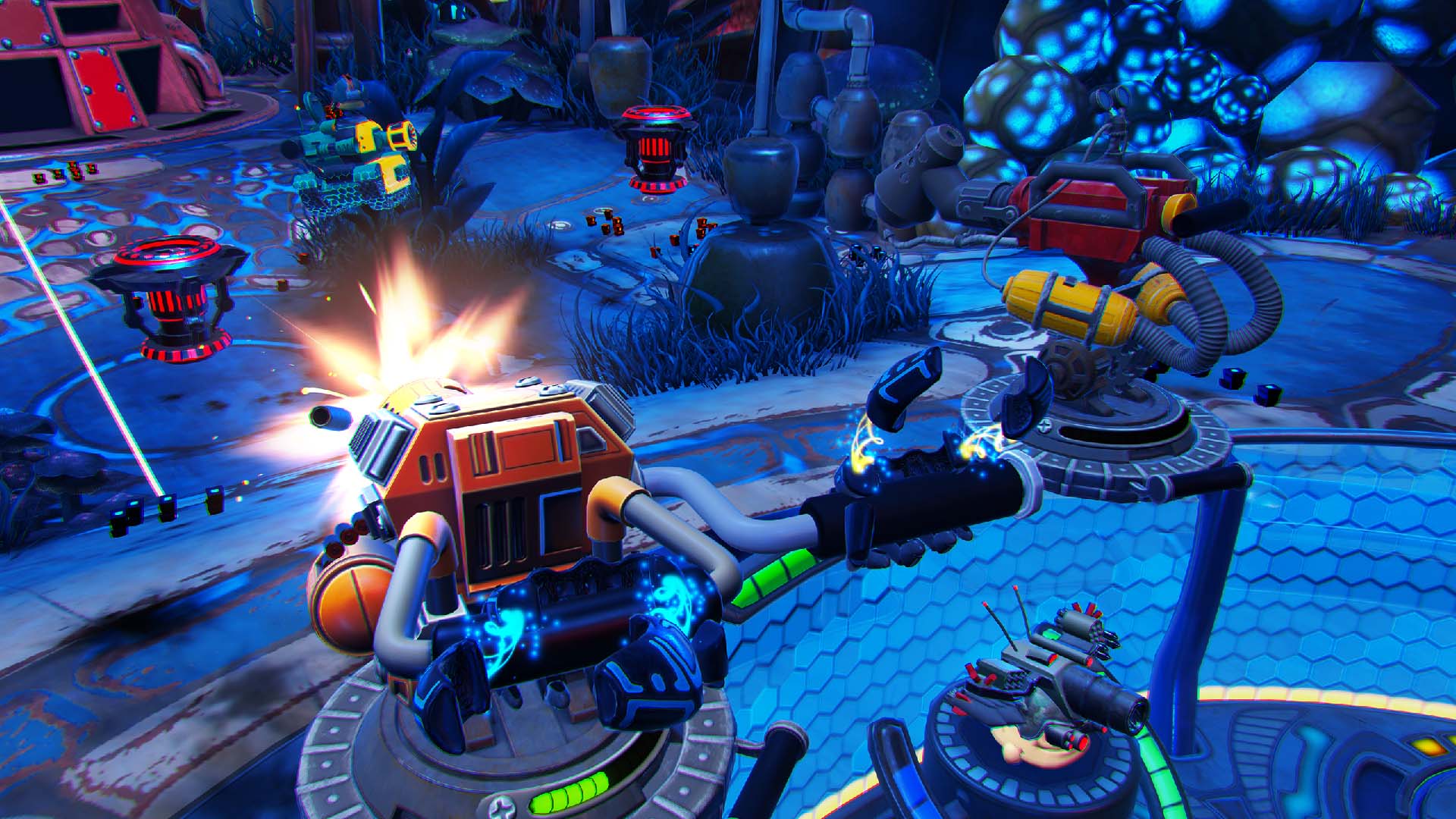 Basically, you travel from planet to planet fighting the enemy species and attempt to wrestle planets from their grasp. Oh, its worth mentioning that Spuds Unearthed has a massive online multiplayer aspect to it which means that some of the planets you’re fighting for are already controlled by other players. Anyway, that’s as much as I could make out. At the very start (as you’re waded through the introduction slides) you find yourself in something that looks like an industrial factory. Here you can swap your heroes and change your weapons. Again, no effort is made to explain why you need to do this, so we just have to accept it and move on. The main weapons are two  retro machine guns that are operated by cranking a handle. There are levers that allow you to adjust the position, height and angle of your guns and a handle that you have to keep turning to shoot enemy spuds.

The fact that there are two machine guns is slightly confusing as, to control just one gun, you’re going to need both hands. Which makes it virtually impossible to use both turrets at the same time. Oh well….Anyway, as the fighting begins the enemy spuds march towards you and you send your troops to do battle with them. Your soldiers are little more than tiny cubes that just march forward and shoot. In order to clear the level you have to help them out by shooting at the Zombuds with your turrets. You also have hero spuds that you (literally) throw on to the battlefield.  These heroes have certain abilities/powers such as rocket launchers that may help you turn the tide of battle. Once you’ve cleared the wave of enemies you get to liberate a certain number of spuds and are rewarded with a token. I think you use these tokens to upgrade your heroes but, even after a week or so with this game, I can’t say for sure. 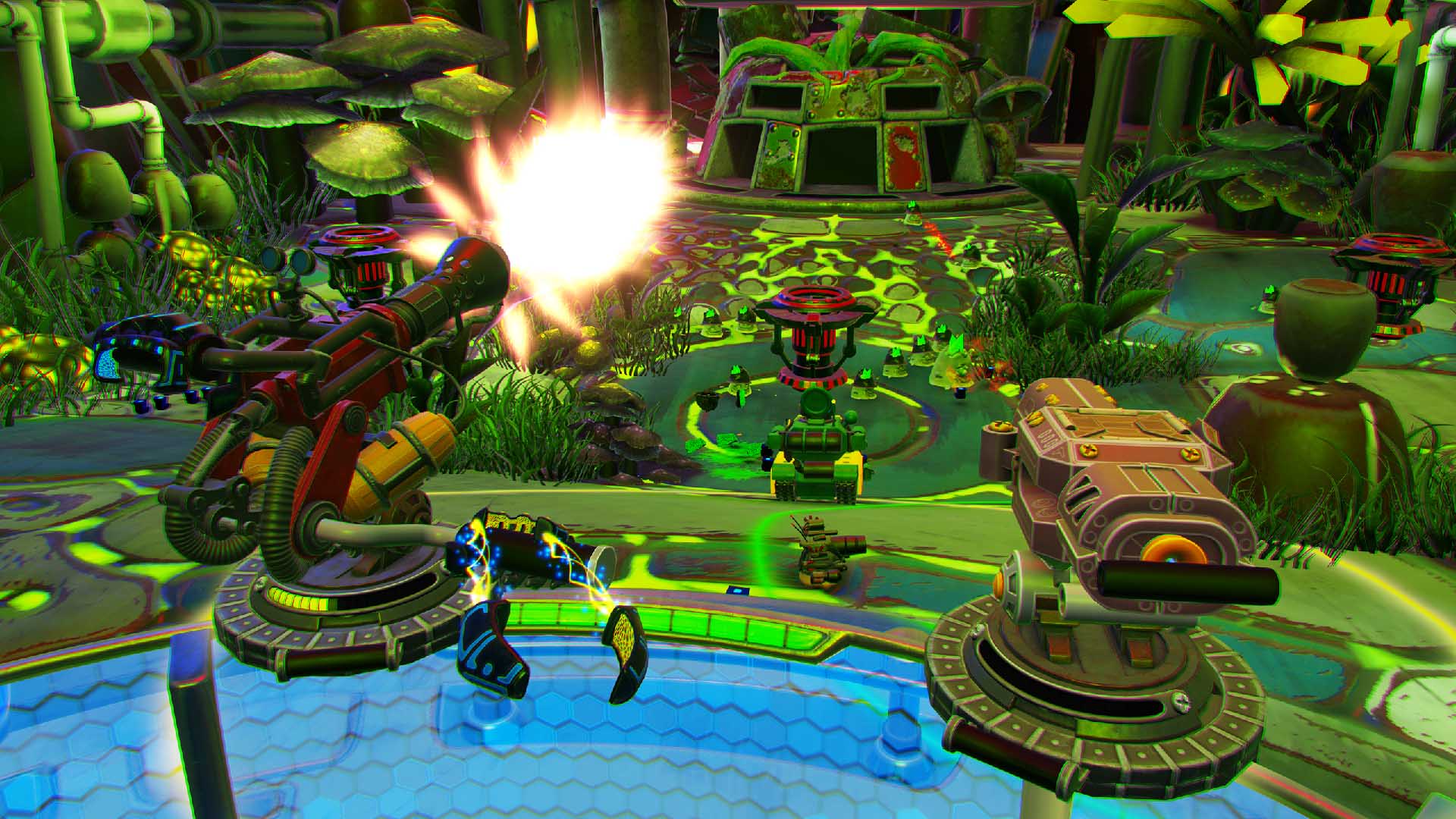 As I mentioned earlier some of the planets you’re fighting for are controlled – or owned – by other players. This is an aspect of the game that intrigued me most but, alas, was not really explained. I had no idea how I got to take over a planet or how to defend it when it’s under attack.

Graphically, Spuds Unearthed looks great. Everything is bright, bold and crisp. The troops lack any real detail but the environment and battle arena’s are gorgeous to look at. I think I can say that the visuals are the strongest element of the game. However, after a week or so trying to figure out what the game is about and why I should play it, I have to admit I gave up. I finally shrugged my shoulders and shouted: ’I surrender.’  The Zombuds hadn’t beaten me. Lack of interest did.

With a lot more explanation and motivation, Spuds Unearthed could have been a great PSVR strategy/tower defence offering. Without these elements, however,  you’ll struggle to understand what’s going on and why you should care.

With a lot more explanation and motivation, Spuds Unearthed could have been a great PSVR strategy/tower defence offering.