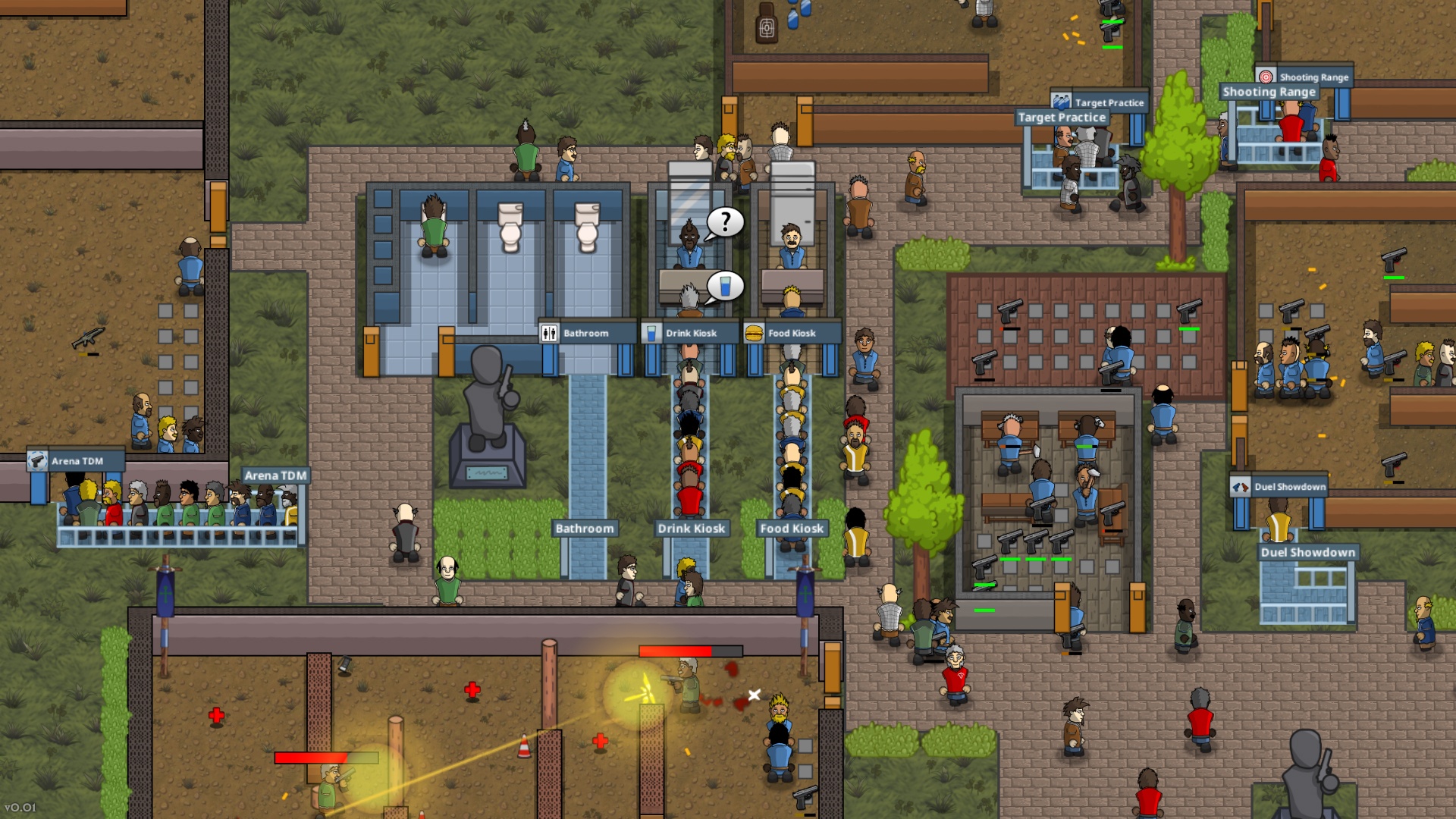 Battle Royale Tycoon is an early access game that epitomises the good and bad of the early access model. While the latest offering from Endless Loop Studios is a technically proficient and a good-looking game, it falls into the trap of clearly deciding on the name before trying to implement game design and many aspects are sadly lacking or lazily implemented. While the fact Battle Royale Tycoon is in early access does mean that many of the flaws of the game can still be corrected, Endless Loop Studios are still charging for the game so it is open to criticism, and there is a good amount of criticism for this game.

Battle Royale Tycoon is not the first game within the management genre that Endless Loop Studios has created. Games like Game Corp DX show that Endless Loop Studios have some experience in the genre and this fact shows in the competency of the basic gameplay of Battle Royale Tycoon. Your job within Battle Royale Tycoon is to build a park that entertains guests with Fortnite-like games, while also managing the needs of your guests and other factors, like gun maintenance and arena rating. At a very basic level these aspects are in place and working, although the omission of any upkeep costs for workers or other amenities is a strange decision that makes the game very easy, and the core gameplay of building and editing attractions is implemented well. However, the sad fact is that this game can be summed up with those two words: very basic.

While Battle Royale Tycoon is a functional game, it is lacking in any sense of depth or challenge. No upkeep costs means that you are constantly gaining money, making going bankrupt impossible and removing any challenge that other tycoon or management games have. This lack of difficulty spills over into the actual arenas themselves. The game proudly proclaims you can design complicated arenas but there are two issues with this. There are not many options for making arenas, with a handful of walls and aesthetics as well as only two non-gun items, and the placement of them doesn’t even matter. You can get a perfect score for an arena by randomly placing items until every review is green, regardless if that is painstaking design or throwing barrels and health packs down one wall. Therefore, one of the main selling points of the game is a lie, as you can’t really design the perfect arena as any arena is perfect with seven wall tiles and fourteen grenades. I could have put this down to ‘early access blues’, but the rest of the game screams the same issues. 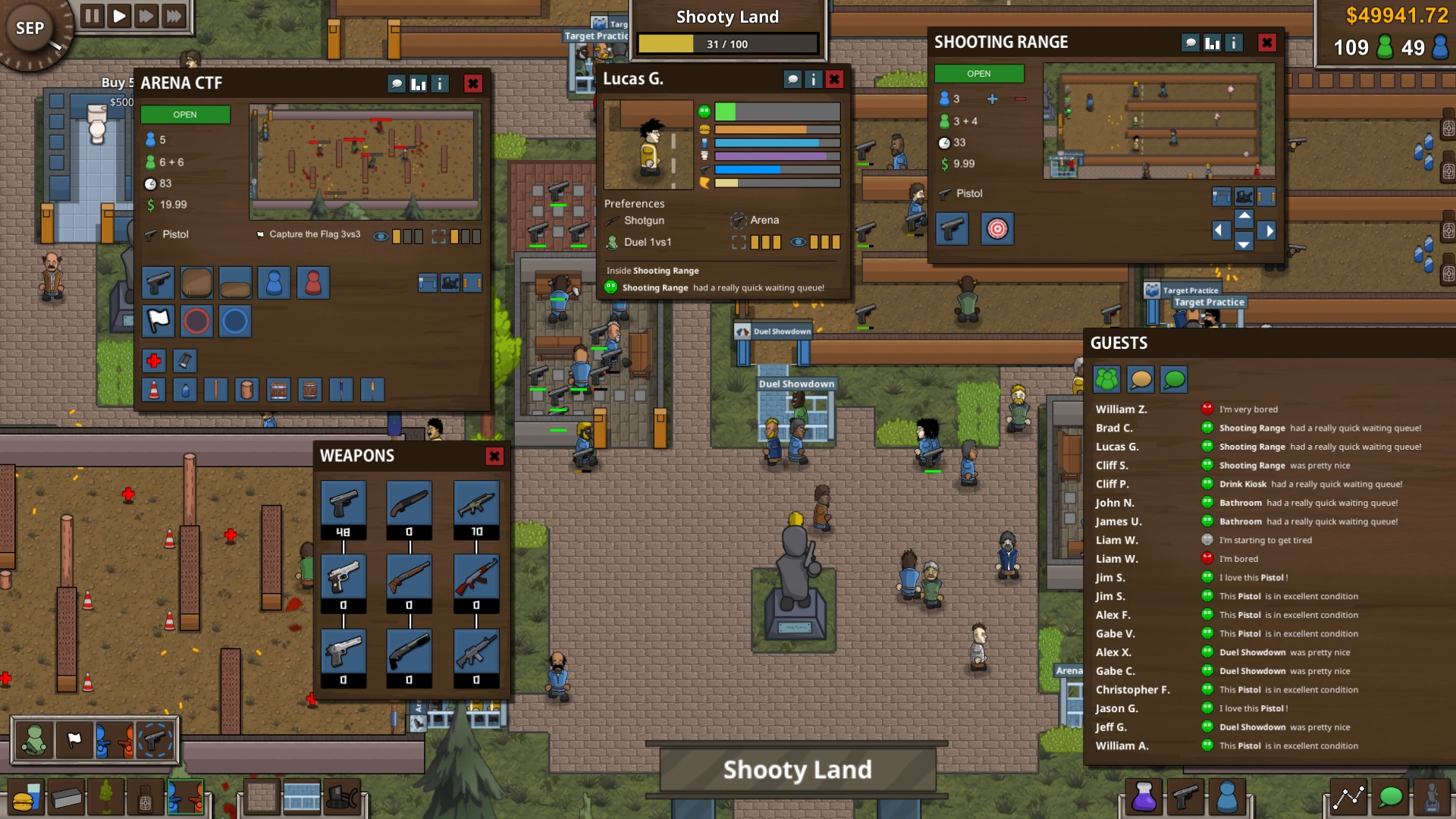 Following on from the lack of challenge or depth, the staff AI is terrible. You can assign a minimum number of staff to always be in your park as roadies, a decision I applaud as very useful for a tycoon game, and then assign these roadies to work in an arena or attraction. This is fine until you realise that staff cannot then be reassigned, so if you make ten staff work in one arena to increase cleaning times they will then never be able to leave. Staff stand around like lemons when fights are ongoing and will then often not bother cleaning up, preferring to stand around and glare at empty gun spawns. There is also, of course, no staff pay or other metrics like happiness or fatigue, making them mindless robots that don’t work very well. While this is not the biggest issue, it does compound other issues and shows the game is thin and not well designed.

Before I get onto my main, and ranting, reason this game is destined for a low review score, let’s talk about the good things about the game. Past the fact the game works and runs well, at least on my machine, the game is also relatively good-looking. While the graphic design is minimalistic and simple it looks clean and pleasant. Endless Loop Studios have a preferred appearance for their games and it is on show here. The music is also good (although having to maximise the volume of the game before you can lower it is strange and badly designed) and doesn’t irritate me the same way many game sound tracks do. From a technical standpoint, Battle Royale Tycoon is a proficient game. 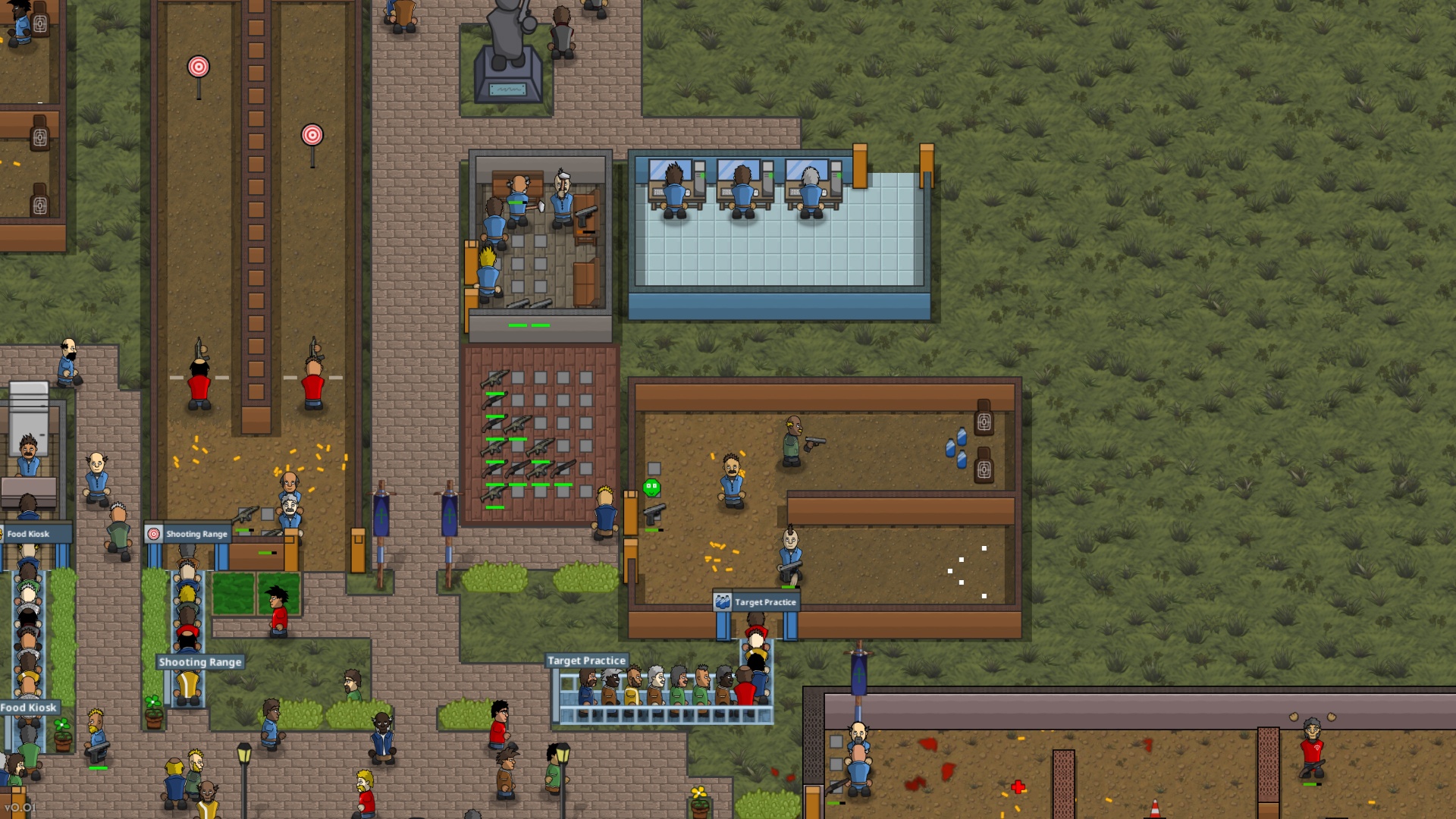 Now, onto the rant. Battle Royale Tycoon is a cash grab. Endless Loop Studios has seen the popularity of games like Fortnite and has decided to make a simplistic management game and slap ‘Battle Royale’ on it to make some quick money. The game is lazily designed and does not implement anything unique to the theme at all. People don’t die in the game, they are just shot with guns that leave blood splatters and bullet shells, but then the people walk away happy. This game treats everything as if it was paintball, but makes a big deal of the theme and showing it is real guns and bullets. If there was an injury and hospital system added, even in a tongue-in-cheek way, then this would not be an issue but no one on the design team seems bothered. As long as they can clickbait the title they are happy, regardless of how lazy and shallow their game is.

Overall, Battle Royale Tycoon is a lazy game that I cannot recommend unless the developers are actually going to implement the theme past the title and skin of the game. The game works fine on my machine, and looks and sounds reasonable, but past that, it is clearly a way for the developers to make money quickly. If the game can add some aspects that make the game more challenging, like adding workers fees and maintenance costs as well as making arena design an actual feature, then it could be on its way to being worth your time. Right now I would avoid this game until it gets sorted out, and go play a real Battle Royale or Tycoon game, because this one isn’t either.

Battle Royale Tycoon is a lazy game that I cannot recommend unless the developers are actually going to implement the theme past the title and skin of the game.

William Whittingham no longer writes for Bonus Stage. We would like to thank him for contributing 1 Review during his trial period with us. Reviewers are an essential part of Bonus Stage and therefore we sincerely appreciate all contributions from reviewers/writers who in-turn help to contribute to Bonus Stage's success. We wish him every success with his next venture.