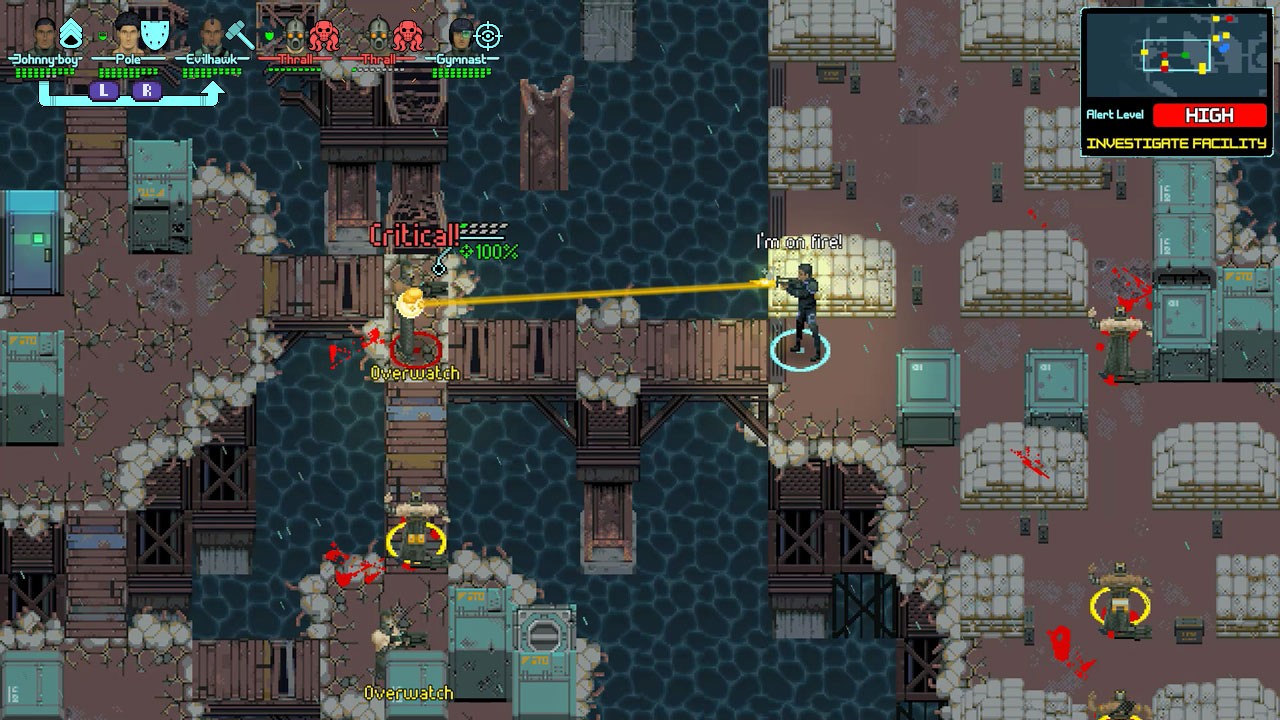 I know of many people that can disregard a game just by its look; especially those that contain a pixel-art aesthetic. Admittedly, I used to do it myself, as I was primarily a Triple-A junkie when I played upon the PS4. However, since turning my gaming attentions to the Nintendo Switch, I’ve grown to appreciate such titles and now own a number of them which I find extremely playable; in some cases, even more so than some Triple-A’s. So, there’s a lesson to be learnt there: Playing games is all about gameplay and immersion, rather than flash-in-the-pan graphics. That’s not to say pixel-art games look trashy either, as I’ve been in awe more times than I’d like to admit with some of the Pixel vistas that have graced my screen. Anyway, the latest pixel-art title to have found a home on my Switch, comes in the form of Depth of Extinction: Definitive Edition as it sinks a release onto the Nintendo Switch.

Developed and Published by HOF Studios, this 2D, pixel-art, turn-based role playing game sees you explore a future world; one that has been flooded and is under the threat of a robotic uprising, as an army of killer machines plot to eradicate mankind, all against the backdrop of a rising tide. As the sole defender of humanity’s last government, its your job to build together a squad, comprising of ten various character classes, and take the fight back and save the human race in a series of tactical skirmishes with roguelike elements. However, this isn’t just your average turn-based role-player, as much like the world around you, this is a game that holds a great deal of depth, through squad building, oufitting and some clever mechanics in the art of tactical combat.

With the world’s population now scattered on a series of small bases, you have the freedom to choose your destination as you sail through a variety of checkpoints in your trusty submarine. The world map is divided into five segments, each one housing a different faction, with each segment containing a series of ports to investigate. With the backdrop of an overall mission objective and an underlying narrative, you explore the region around you, from major locations to smaller, discreet bases, as you raid installations for loot, XP and armour, before moving onto the next location. However, there are many elements that continually guide in the right direction of story progression, should you veer from your course to embark on a path of your own choice. 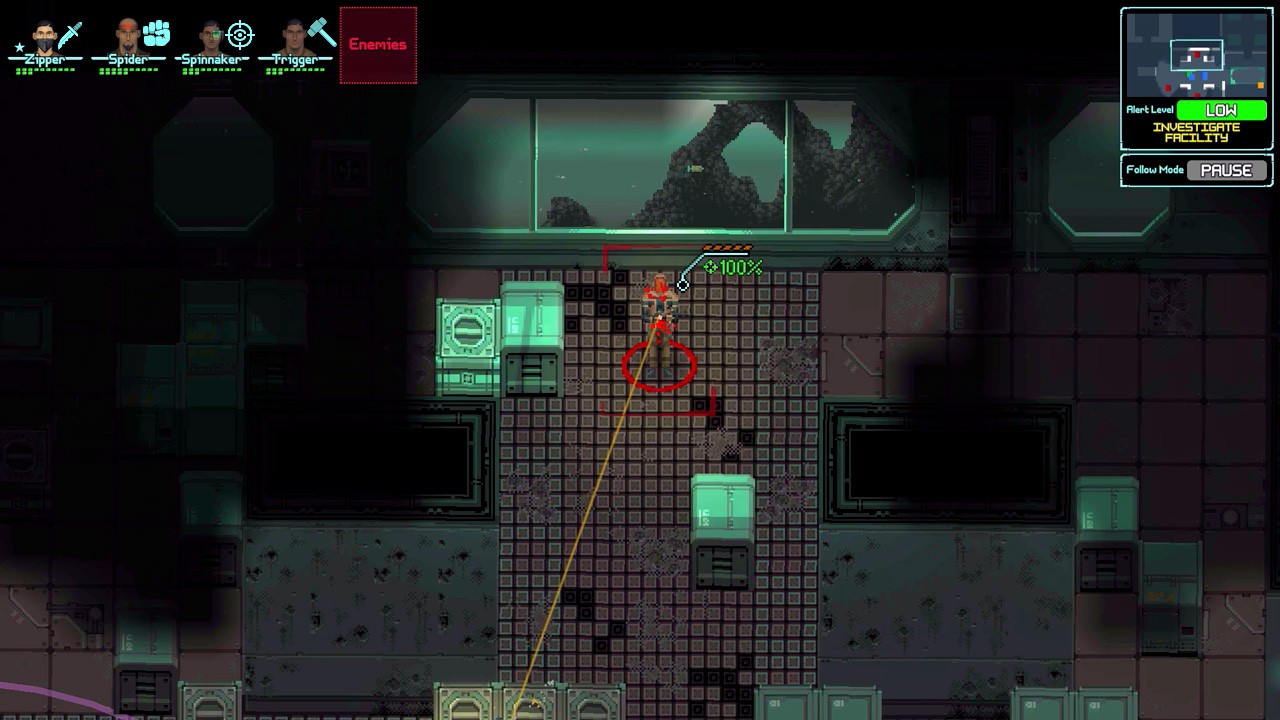 Your choices become an important element of the game, as should you need to accrue more supplies, such as money, medicines or weaponry, you can scout the area for these much needed items. In fact, the game does a great job of providing intel on your current situation; often guiding you on whether you should bypass a particular location, spy on them, or simply overrun the facility, kill all those within and take all of the loot that you can find. There’s a lot of fun to be had in exploring the areas, performing reconnaissance of your surroundings and taking the decision on whether to risk your squad for supplies.

The real beauty of this game though, comes in the amount of options, depth and choices given to the player. At the start of embarking on your mission objectives, you get to outfit your party, pick a submarine and hire one extra member to join your squad. Each squad member contains their own set of unique perks and abilities through a series of classes, including for the first time on the Nintendo Switch, the Saboteur. As well as this, the game also hosts over one hundred variations of weaponry, armour and extra items. This can be built upon through looting, although progression also opens up a series of merchants that sell a number of goods; often holding more powerful elements that are useful for some of the in-game boss fights.

Once you have docked at a particular location, the game presents a mini-map of the layout of the base you are currently in. Much like X-Com, the action is turn-based, but very reliant on providing cover for your team and taking full advantage of environmental cover. Selecting a character produces a movement range, as well as reads the environment to provide data on cover percentages, hit chances and environmental interactions, such as opening doors etc. It’s also here, where characters classes and weaponry plays an important part, with weapon firing ranges, such as keeping long-distance snipers at the back of your formation, whilst shotgun wielders do more damage up front. The game does a great job of producing a series  of tactical styles, making it sublimely easy to set up your squad for stealthy approaches or hidden ambushes. 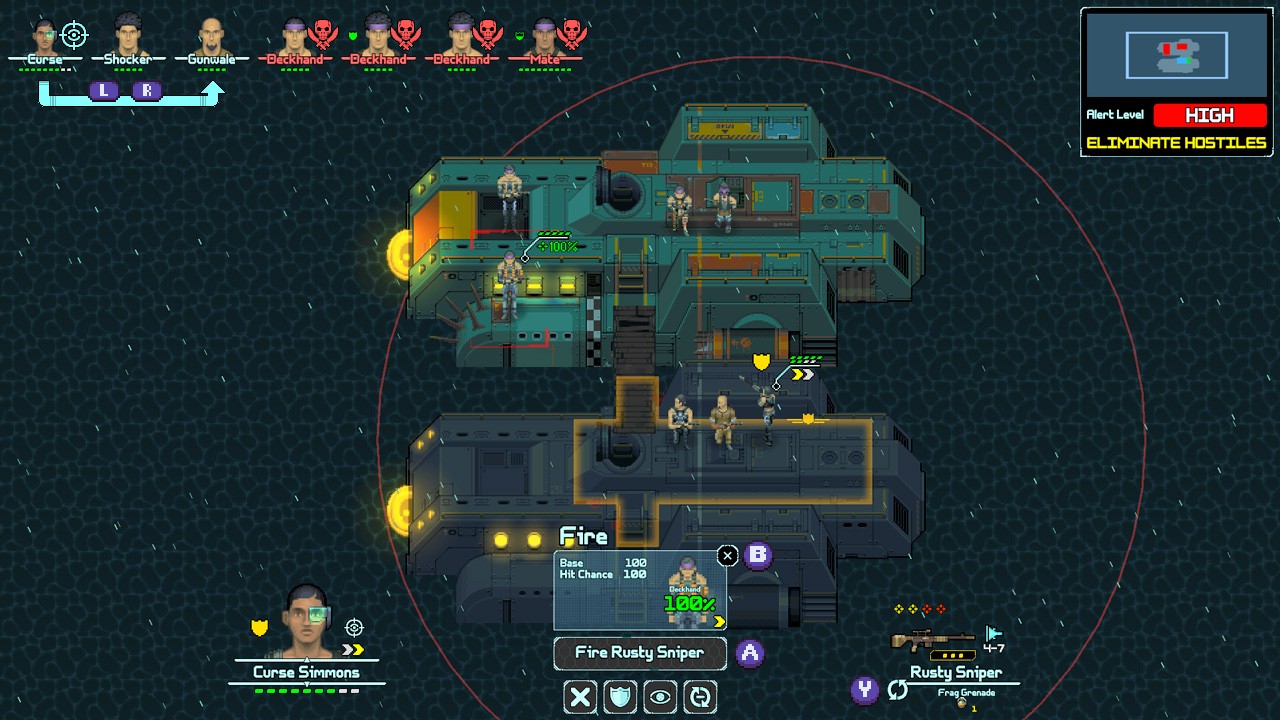 The control scheme is easily accessible, as is the on-screen information that provides real-time changes of your positioning. A series of menus offer extensive information and at the beginning, can feel a little disorientating, but with continued play, you soon learn to read the layout and functions of each of these screens; making outfitting a breeze eventually. There’s a lot of fun to be had with experimenting with different classes and layouts, something that is important during the early game levels, as the further you progress, the more important your choices become. The more familiar you are with classes, characters and outfits, the more adept you become later on in the game.

The many elements that comprise the game, from picking paths, squad building, outfitting and combat are nicely presented and highly entertaining. This is further bolstered by some nice immersion qualities, such as squad radio chatter as they acknowledge orders or describe the events around them. The pixel-art presentation is also nicely detailed, with a very effective, futuristic feel in its overall level of atmospheric presentations. It feels gritty and more suited to a mature player, especially with its wealth of tactical diversity and strategies needed to win. Unfortunately though, this release of the game contains some technical and performance hindering problems as you progress to a point deeper in the game. However, the developers have recognised the problem and a patch is incoming to address this issue.

Overall though, Depth of Extinction: Definitive Edition is one of the most detailed and immersive turn-based strategy games I have come across; further proof that pixel-art games can hold a lot more than meets the eye. Its freedom of choice and tactical choices make it an enjoyable experience, although the further you progress, the more repetitive the game begins to feel. In that respect, it’s by no means perfect, but it is one hell of a blast; especially if you love retro-styled, old-school games, something that is further bolstered by a rather fun chip-tune 80’s synth-wave soundtrack. Despite some elements being a bit cumbersome or repetitive, the overall level of depth that this game holds does keep you coming back and the overall journey that you take, decisions that you make and character experimentations, makes this a game that is far from becoming extinct.

Dive into a futuristic and flooded world in order to save humanity in Depth of Extinction.