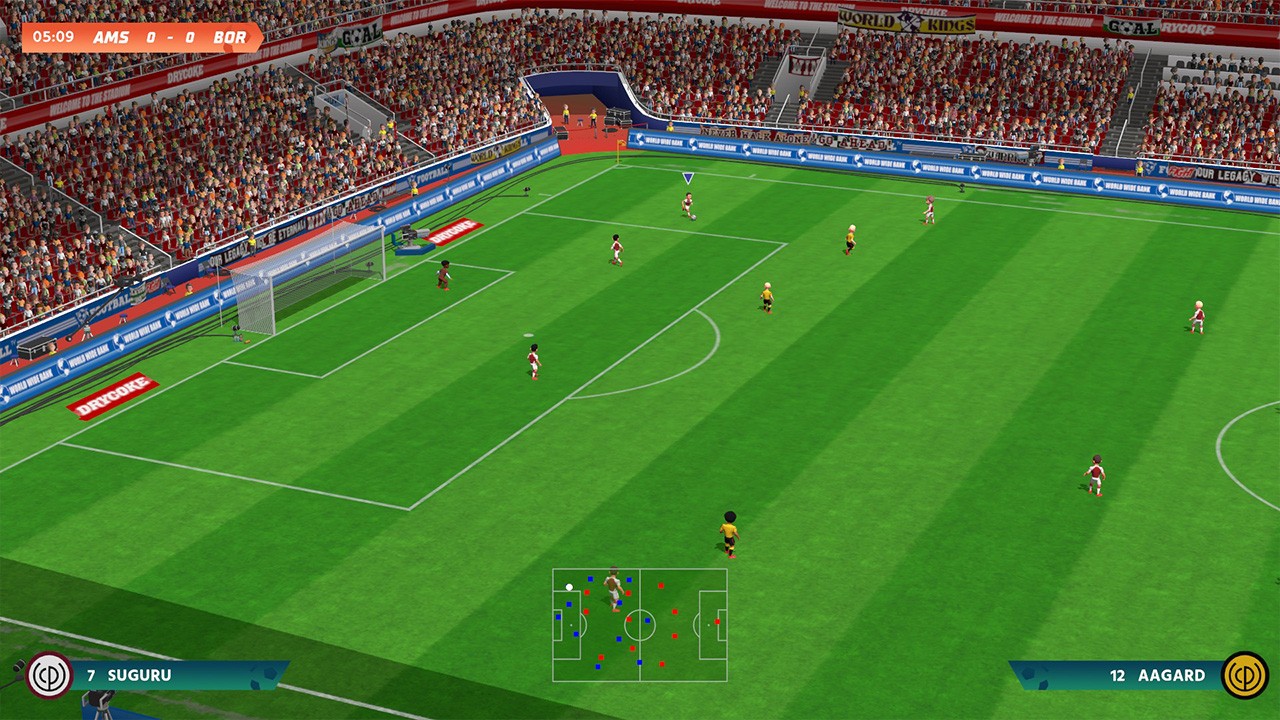 Football or Soccer for our American cousins, has been massive business for a long time. It influences so many people’s lives, a number of them will place their love of their team over friends and family. The gaming industry has been dominated by the presence of 2 key titles for as long as I can remember; Fifa and Pro Evo Soccer. Of course, others have popped up along the way, but none seem to have gained such popularity. Focusing mainly on the realistic elements, you must form strong careers, manage teams, and control finances. This leaves little room for a simple, fun and fast-paced arcade approach. The last football title that prioritised fun over realism was the tabletop retro smash Sensible Soccer. My latest review title picks up exactly where it had left off, where fun and fast-paced action is the name of the game. Super Soccer Blast is a retro-style sports title that contains no licences, so it’s made-up names, and lookalikes galore.

Developed by Unfinished Pixel you must control your team of players aiming to win every match you participate in across a number of game modes and tournaments. With its off-brand and “old school” kits, it has a distinctly retro feeling to it and a very basic approach to details. Unlike Fifa, you don’t really have to concern yourself with the rules of the game, though the basic principles do apply. With this title taking an arcade approach, it does miss some key features that would have been nice to experience. All the competitions are comprised of limited fixtures, so you never really feel invested in the action, it would have been nice to have a simplified version of a career mode, just for something to get your teeth into.

You are given the choices of selecting between 5 different world tour tournaments, ultimately they are all the same thing, but with restrictions applied to which teams you can select. Unlike in Pro Evo Soccer, no weighting has been applied to the real-life standing of each nation, so you are effectively just choosing your team based on the kit they are wearing, and the avatar that is associated with each country. You are permitted to alter how long each match takes, and the opposition’s difficulty level. I found that no matter how difficult you made it, it really wasn’t that challenging. This wasn’t helped that both sets of keepers have the defensive qualities of a wet paper bag, practically any shot that was hit on target was a guaranteed goal. Now you may think, “That sounds awful, where is the fun in that?” As it’s applied to both sides, it was fairly balanced, which led to some absolute world-class goals being scored, my personal favourite was an overhead kick from about 45 yards out. 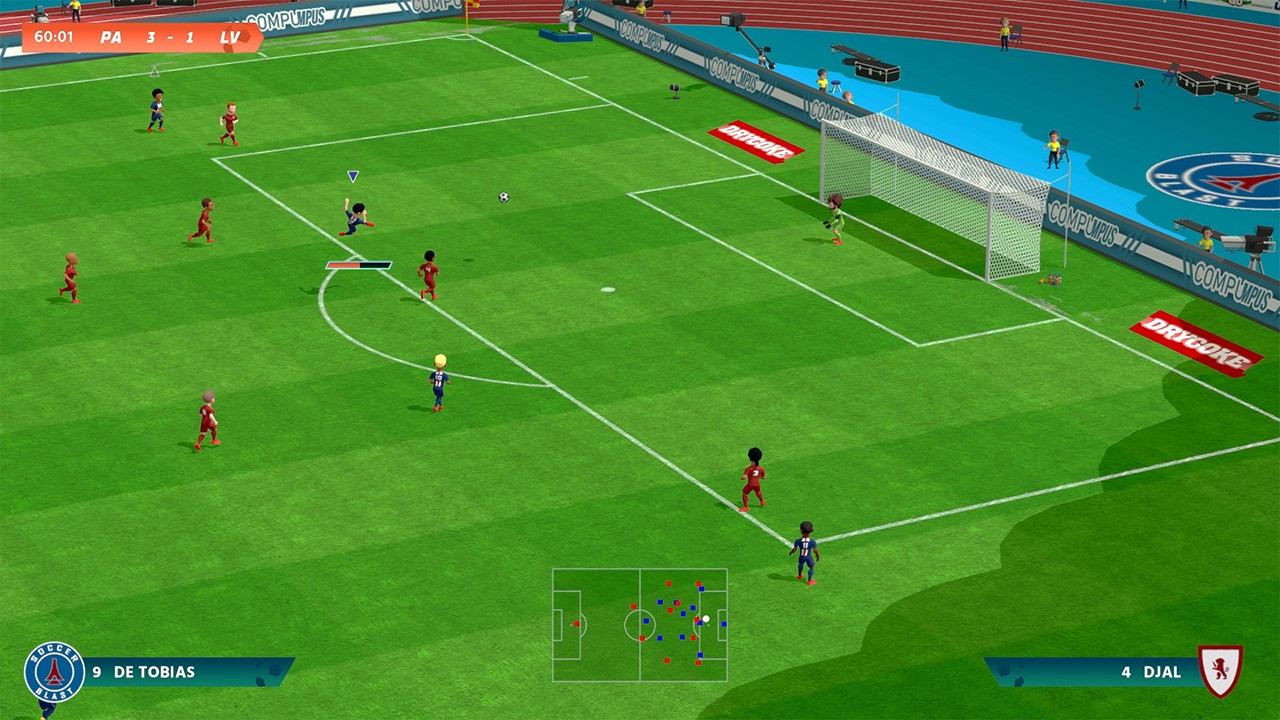 The arcade nature of this title created fast-paced end to end action, where goals were all but guaranteed. Your teammates and the opposition don’t really react to how the match is panning out, and you will find that it’s usually a lot easier to run the ball from your own defence, rather than try to pass it forwards. A casual game that will entertain you, but you must put all your knowledge of football to one side, otherwise you’ll find yourself frustrated at the bizarre game mechanics, and amusingly lenient referees. Though I found that it was lacking in match choices, what I did get to play was good. If you happen to be looking for something less serious than the usual suspects, then this could well fill that void.

Retro gaming and indie titles are a match made in heaven. The height of the camera and its wide-angled perspective allows you a clear view of how the match is flowing. The pitches are well designed, and the action is really easy to follow. An arrow highlighted beside your player informs you who’s selected, and a dull arrow next to another advises you of which player is available to choose next. The avatars resemble a star from their selected nation. Due to the lack of a licence, the players all have made-up names, but the resemblances are uncanny. The movement of the players is a little dated, and not as smooth as you’d perhaps like from a sports title, luckily, it doesn’t impact how the game plays, so I didn’t really pay too much attention to it.

If you are currently watching football in lockdown, then you will be familiar with how alien the whole situation is. Fake fan noise to create an atmosphere, and everything feeling just a little flat. No commentators and less than enthusiastic fans mean that lockdown football has been perfectly replicated. It was a shame, as the pace of each of the games deserved screaming fans, and crazy elation as your team scored, instead, it was similar to a day out at the Emirates, where fans may whisper their praise to the team that they support. 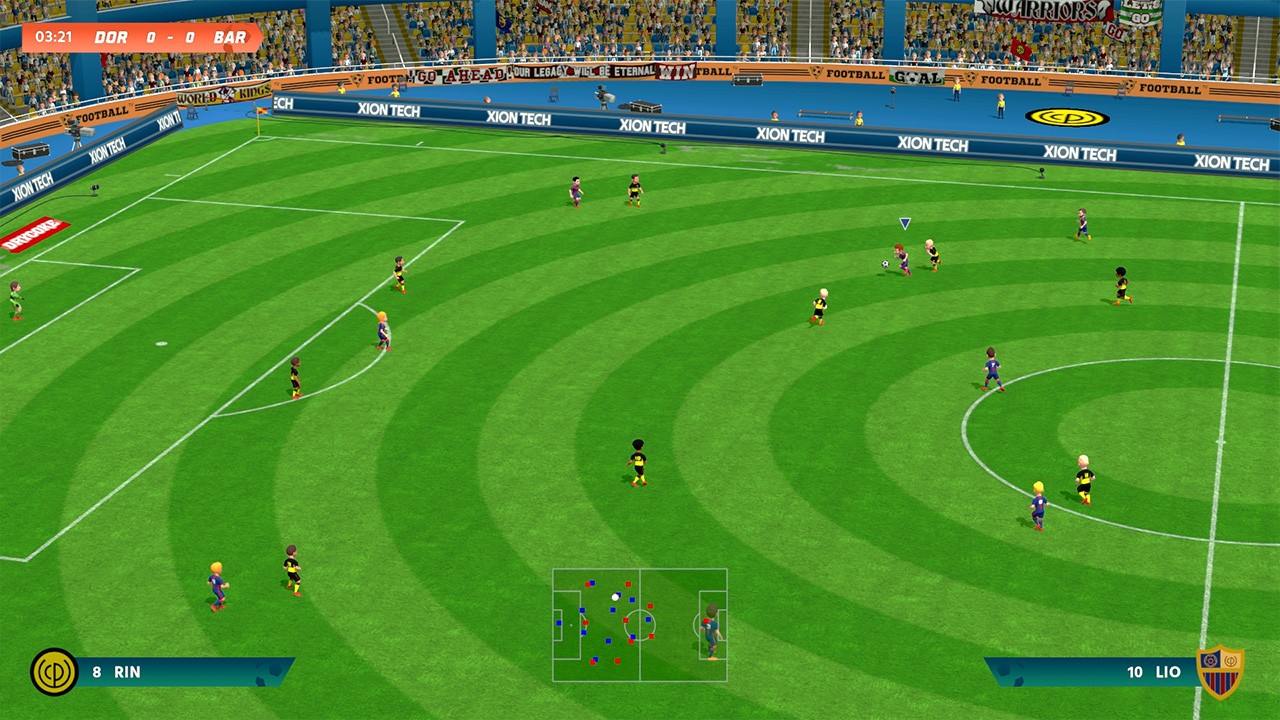 Having spent so much time playing Fifa, I’ve been treated to some of the smoothest controls that are available in any sports title. Imagine my shock when a lack of aim assistance meant that most of the work had to be put in by me, the player! No longer could I just aim the pass in a general direction, and know that it’ll land at the feet of my teammate. No, I actually have to ensure that the ball would be received by someone, otherwise, it’s a turnover of play, and likely a goal conceded. If you have played a football game in the last 15 years, you will know exactly what you have to do. The developers have given the choice of either Fifa or the Pro Evo control layout, making it feel all too familiar. The button input speed is good, and it does keep up with the action. On the whole, the controls are very good and make this a very enjoyable, albeit casual gaming experience.

The big boys of the genre have had players returning; game after game, day after day, and week after week, year in year out. Can a little arcade football title have that same impact? Unfortunately, I don’t think it can, now don’t get me wrong, it’s an extremely good game, with some fun gameplay mechanics, and a strong foundation. But, without one in-depth mode, it leaves you wanting more. I would have loved to have a couple of seasons controlling a club level team, with a few chances to pick up silverware en route. The 5 tournaments that are available are short-lived, and unless you have someone to play against, the lack of challenge from the computer opposition limits the amount of time you’ll wish to play for. To complete this, you’ll be looking at around 3 to 4 hours, all the achievements are earned through natural progression, and only a small amount of luck is required for the more challenging tasks. Is it worth the money? Absolutely, though the amount of time you get out of it, will depend on how much you love the game, and if you have a friend to play it with.

Super Soccer Blast is a great casual title that will attract fans of the genre for a quick kick about. Its retro feel and the fast pace will have the older generation of sports fans feeling very nostalgic. It doesn’t quite match up to Sensible Soccer, but it certainly goes close. The developers clearly have a great sense of humour with the avatar art, and the character models they have used. Would I recommend this quirky football title? Absolutely, it’s fun to play, and can be picked up and put down without concern that you’ll forget what is going on. It’s time to grab your kit and ball because the beautiful game just got a new contender in town.

It’s time to forget the serious side of the game and concentrate on having fun. Super Soccer Blast does that with its fast-paced retro style. Grab your ball and kit, it’s time to enjoy the beautiful game again.