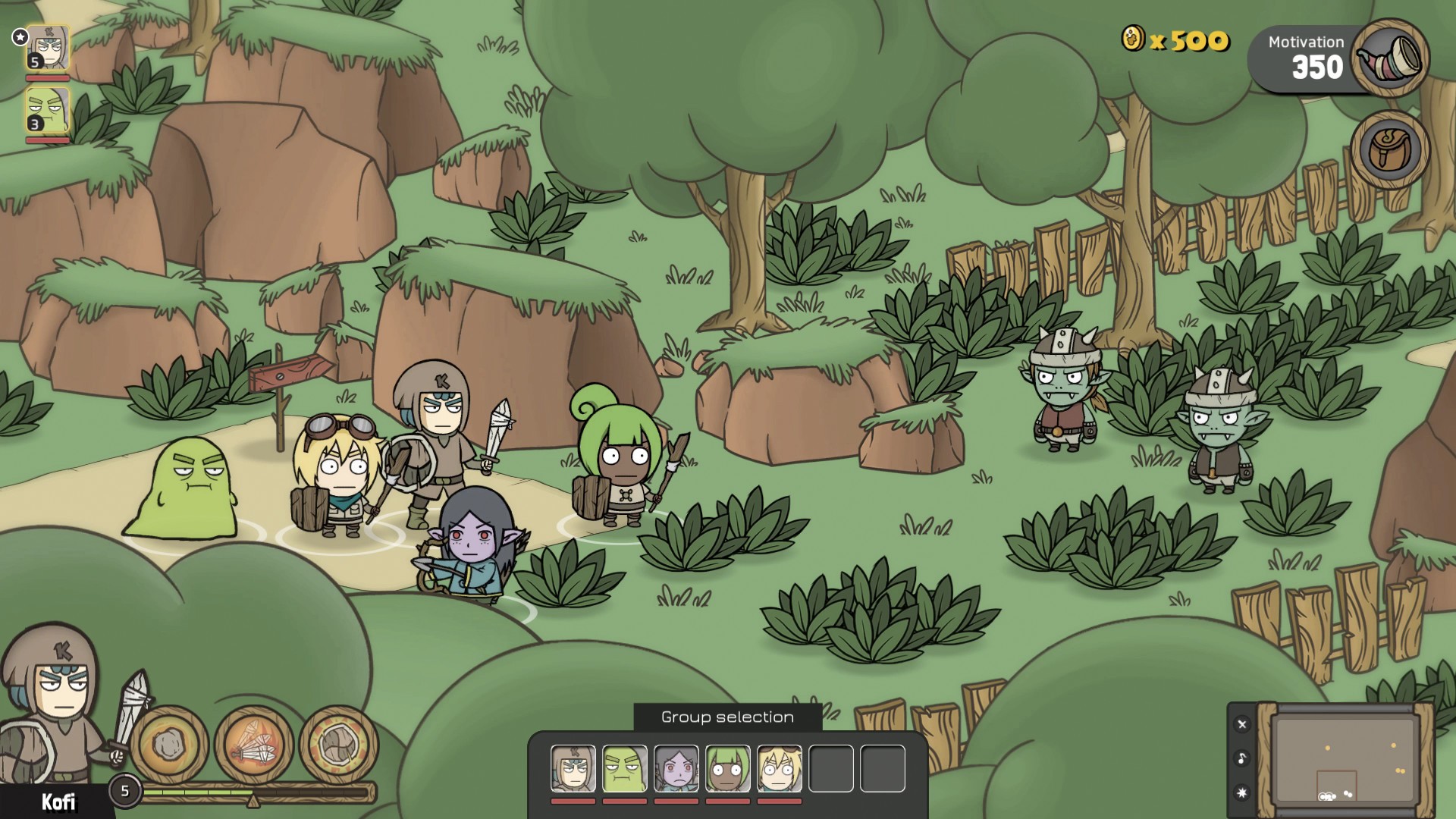 The RTS genre has always been a popular one, though it has been way less active in the past years. There have been games here and there attempting to bring the formula back, but none seem to have struck gold. Kofi Quest: Alpha Mod attempts to revitalize the formula and combine it with the RPG genre, to degrees of success. For good measure, it also adds into the mix some self-aware writing, ever so popular in recent times.

Kofi Quest: Alpha Mod is a tie-in game with the mini webseries Kofi, available on YouTube in Spanish. While those that have watched the series will know some of the characters better, there is no issue whatsoever, the game gives more than enough information to understand what’s going on.

The story itself is centered on a fetch quest for a magical bottle. This bottle is a powerful item usually protected by the Wise Bearded Monks, but lost by Chai, a monk apprentice, after he and his master are attacked by a powerful warlock.

During the game, the player plays as the titular hero, Kofi, a lazy mercebinary who spends his days playing videogames. After meeting the kid Pal, Kofi is dragged into being the captain of a rag-tag group of low level mercebinaries comprised of elf and human kids. After a skirmish with the orcs to rescue a captured member, the party finds Chai in some bushes and cons him into hiring them to retrieve the lost bottle.

As it was expected from the writer, who has two finished and published webcomics, the writing is a highlight of the game, being both intelligent and funny, but is done a disservice by the gameplay. If the self-aware humor points out exactly the same things the player is cursing at, it only adds salt to the injury. The biggest example is how the game itself points out how stupid fetch and escort quests are, while putting the player through both.

Moving on, Kofi Quest’s graphics are great, everything looks crisp with unique models for both characters and enemies. There is a pair of problems worth mentioning though, the zones look somewhat repetitive, with a lot of asset reusing and some of the cutscenes are lacklustre due to the pretty basic animations.

The sound department is also well covered, with a pretty good soundtrack and voice acting for almost every character. There’s even a joke in one of the dialogues to explain why some don’t have it. The SFX are also good, everything is recognisable through sound without getting annoying. 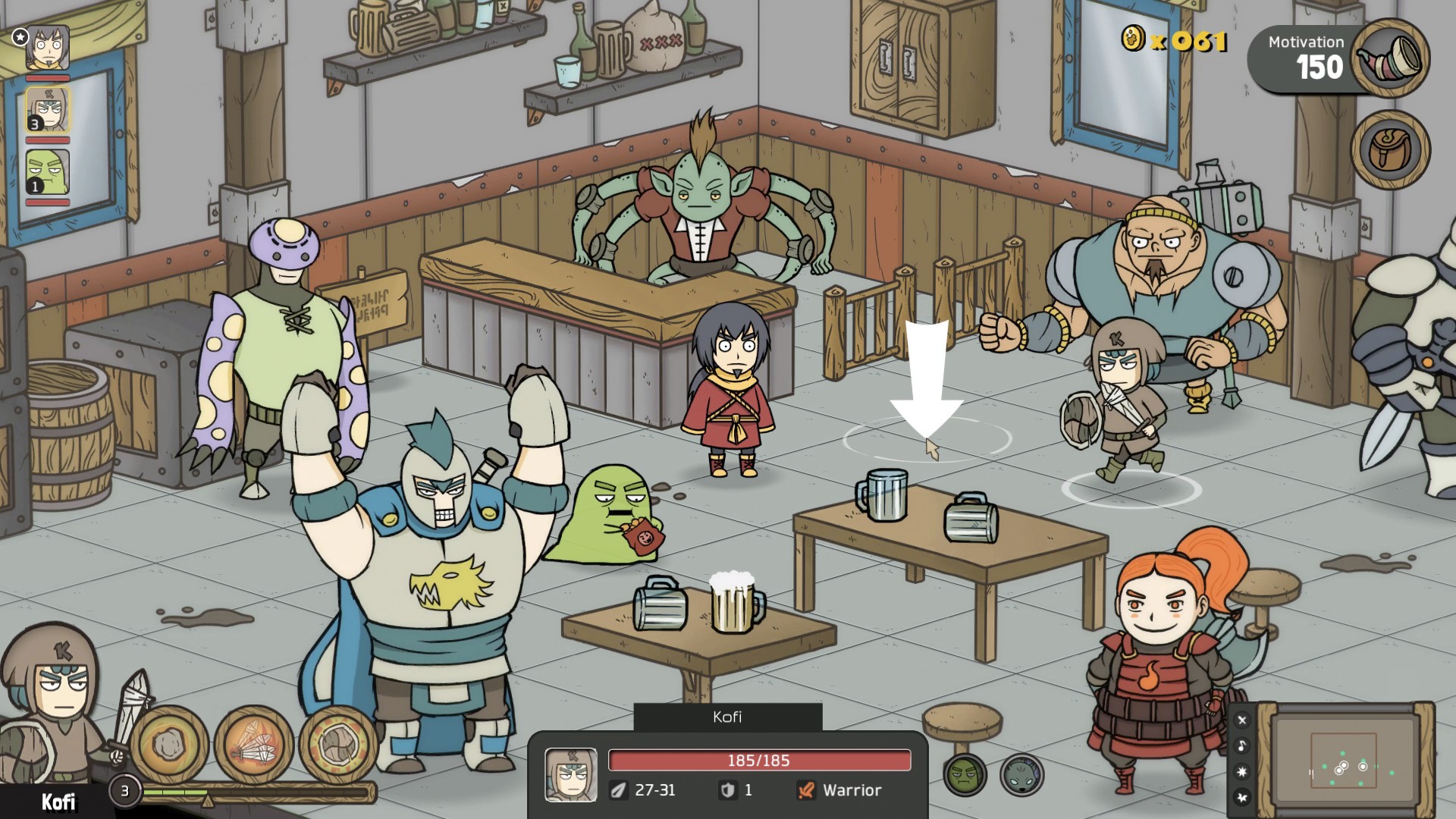 Finally onto the gameplay, Kofi Quest’s biggest flaw. As previously mentioned, Kofi Quest is an RTS combined with an RPG, what this means for the player is that besides managing an army they have an inventory and equipment for their units. The problem is this mechanic is not well implemented. Most of the units cannot change their equipment at all and on those that can, the difference is invisible.

Another big issue with the gameplay is how the whole game plays as an escort mission, if Chai dies the whole mission restarts from the last save point, and believe me, Chai will die. Up until the last few levels Chai is completely useless, while ally units spawn at his position, or rather the position of his flag, he deals minuscule amounts of damage and can take as much. Later into the game, it is actually Kofi himself that becomes the escorted unit, basically removing one of the better units from the team. Now, the reader may wonder if Kofi is one of the better units, why would he be removed just because the game resets if he dies? Well, the answer for that is that the units in Kofi Quest don’t improve over time, after every boss a message appears saying they have improved, but this doesn’t prove true, there’s never a point where the player will think they’re strong.

The game also has a kink for handicapping the player by completely removing the RTS element and leaving them with just a few of their units. For example, in the last dungeon the player has to face a boss with only Kofi and Chai. What ensues is a 15 minute battle where Kofi goes to deal some damage until he dies, and then Chai has to run like a headless chicken until Kofi revives and the cycle restarts. This is not the only time a situation like this exists; there are several areas where the roster is limited to Kofi and Chai, where due to some random reason, the rest of the troops can’t be summoned, or Kofi and Elfa, his high level friend (and the best unit the player can control in the whole game, though it’s not saying much).

It’s worth pointing out the game has a lot of alternative paths to explore, but it feels pointless since most just lead to a chest, which become a nuisance soon enough. While items, especially potions are still useful, gold is worthless. The explanation for this is simple enough, the player’s wallet caps at 999 and gold can only be stored in the base camp, to which the player would have to fast travel or walk, but the inability to fast travel back from there makes it a complete waste of time. A lot of times I found myself running around with 999 gold for a whole level because I had nothing to do with it.

The fast travel mechanic is another crime in itself. While it exists and can be useful, it only works on a select few save points for whatever genius decision. The maps are not exactly small, so backtracking is a complete drag, having to walk huge lengths of land just to go back to the point where the fast travel was used. To be more specific, there are around 5 teleport points, one per main area. There is no explanation for this either; some allow teleportation because they do. 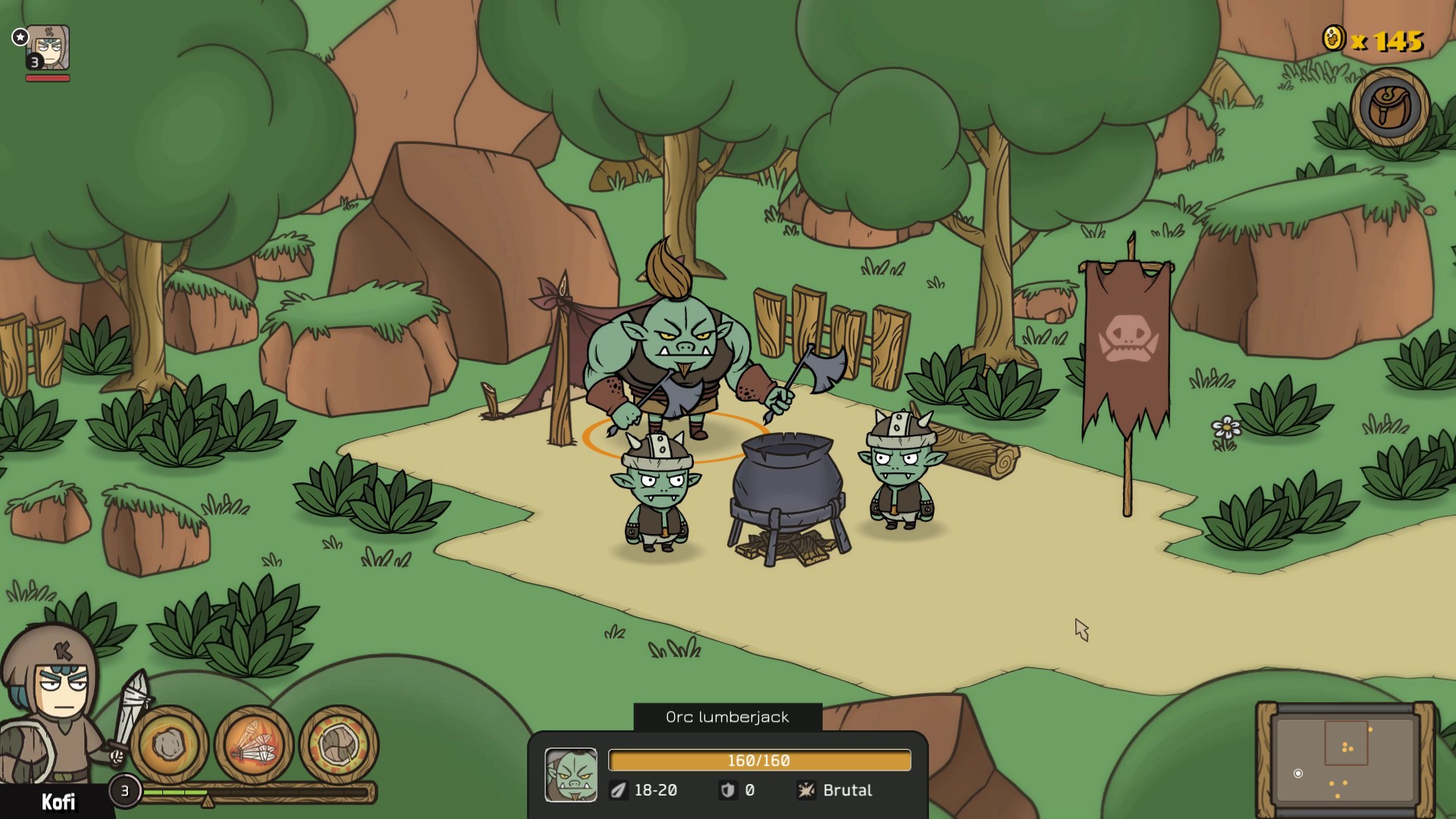 One of the biggest qualms I as a player had with the game is how characters can canonically revive and come back, but if the escorted unit dies a full reset happens. This makes no sense since the rest of the army can just go on fighting without them; while it sets some “stakes” it does so by annoying the player and adding a fun sucking gimmick to the game. Another huge problem was the impossibility to remap the controls; the camera for example is set to the arrow keys, while the abilities are set to Q W E and the movement to the mouse. While the camera can also be moved with the mouse, it is way less precise, so the swapping from one position to the other wastes a lot of time, making it hard to control, heal and manage the units smoothly.

This next paragraph is just pure personal opinion; it is definitely not objective and probably won’t apply to everyone, so take it as you will. I really wanted to like this game; I’ve read the comics by the author before, met him and watched the webseries. At the start of the game I was having a lot of fun, but once Chai was introduced, it just felt like it was getting worse and worse, with me liking it less and less. During the last part of the game I just decided to give up and cheese it, it was really tiresome to repeat the same rooms because the high level enemies had no problem killing Chai, since the controls to select all but Chai are imprecise at best. To do so I proceeded to use the most broken ability in the game, with an almost 10 minute cooldown, go do something else and repeat. While this may seem absurd, it felt way more satisfying than putting myself through the absolute drag of those rooms over and over. As a disclaimer, I played the game on the hardest difficulty possible, an easier difficulty might provide a more fun experience, though I doubt it seeing as my problem was mostly with the mechanics of the game itself. Something worth mentioning is the level where Kofi becomes the insta-death unit, this part was even worse than with Chai, because it combined with not being able to summon the whole army. This implied not being able to use one of the better units due to how the enemy would almost always focus him, while also being made worse by the fact that Kofi straight up runs towards the enemies of his own volition, regardless of how many times the player moves him back.

Overall, Kofi Quest: Alpha Mod is not a bad game, it definitely has the production value, but it would do way better with a lot of quality of life changes. While I myself wouldn’t go around recommending it, I don’t consider it’s a game with which nobody would have fun, playing it at a lower difficulty would certainly help. The art, music and writing also somewhat redeem the game, making it at least worth a shot.

Kofi Quest: Alpha Mod is not a bad game, it definitely has the production value, but it would do way better with a lot of quality of life changes.