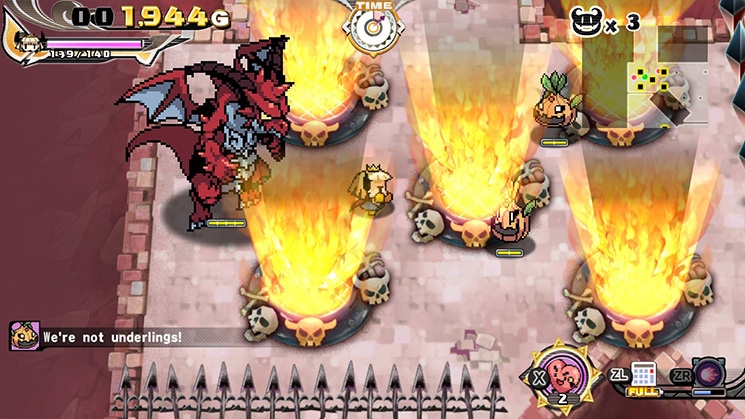 It’s been a long time since I’ve happened upon a game that really does it’s best to uncover the evils of capitalism. For some reason, it hasn’t been a popular subject in gaming media: most of the time, we’re all a bit aware of the consumption factor that comes into relying on money for everything, but rarely is it addressed in a game. From RPG’s to Puzzle games, you’ll find that money definitely gives you a leg up, but it really only gets you so far. Mostly you have to grind for levels, find the secret ultra weapon or make unlikely allies with your greatest foes. But, in the case of Penny Punching Princess, greed is good; except for when it’s not.

Penny Punching Princess is the tale of our unnamed princess, or former princess, rather, who’s father, the king, has totally lost the kingdom and also died a pauper. Turns out that daddy made some bad investments thanks to the Dragoloan family, a corrupt organization who gives out loans the same way the Mafia does. Setting off with only her loyal rhinoceros beetle butler, Sebastian, the Princess is on a road to revenge, and the only way to settle the score is using the same force that brought her family ruin: money. With the blessing of Zenigami, the God of money upon her, the princess must scrounge, save and invest every cent she can find to win back what’s rightfully hers. But is all the effort and focus on currency really the best path? Will the princess lose what humanity she has in her quest for vengeance, simply because of her pursuit of the coin? All of these answers are pretty simple to figure out, but let’s still have fun with the game anyways.

Penny Punching Princess is a top down action/adventure game that has an amazing money mechanic which cannot and should not go unnoticed. Since the princess is the lone heroine of the game, your objective is to use your brawn and your wallet to get through multiple stages. The brawn is pretty straightforward: light punch, heavy punch, dodge roll and a limited use “power” attack that changes based on your armor. The power recharges after it’s all used up, but you have to actually use it all up. So if you have a three-charge move, you gotta use it three times: no using it once and then hoping to regen to three between bouts. It’s a weird choice, but whatever. As much as you’ll be punching, you’ll mostly be doing accountant fighting. This is done through the power of this God-Blessed Calculator, a present from Zenigami with absolutely no ulterior motive other than the goodness of his feline heart. The calculator is used to conjure up any number of money-related powers, such as creating a Money Miracle (use cash to create buffs or random effects), but you’ll mostly use it for bribing. 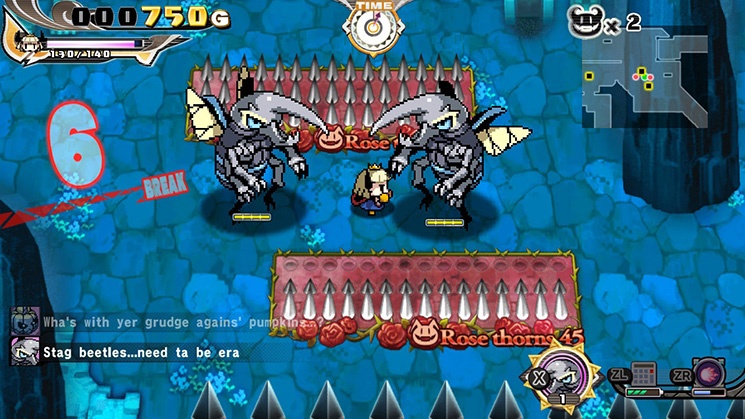 When your calculator meter is full (only one charge at first), Princess crunches some numbers to see how much cash she has around, and figures out what everyone’s asking price is. You then pay a certain amount to enemies or traps to win them over to your team. This serves a dual purpose of getting them to stop hitting you and then getting them to start hitting other people. In all honesty, it’s one of the most unique approaches to the problem of “one versus many” that I’ve seen in recent memory, and also the one that makes the most sense. A goblin might be willing to follow his dark lord and master, but a few bucks in his pocket might convince him to go against the grain and whack a few of his former colleagues. Strangely, bribing traps, like spiked floors or giant cannons, doesn’t totally make sense, but whatever, it’s fun and the traps are more powerful than the enemies with the caveat that they’re stationary. Bribing a baddie gives you some travel power and you can bring their strength to the next fight, but even the biggest dragon pales in comparison to the spinning blades of doom or poisonous flowers. And no, you can’t bribe bosses, so don’t even consider it.

Penny Punching Princess does a lot right in several categories. For one, the controls are fluid and feel natural to the Switch, though I do recommend using button controls and not touch controls. There’s “break” moments where you hit the bad guys enough to make them drop money like crazy, and that’s best done through the right joystick and not frantic screen tapping. Additionally, the game itself is pretty fun and likeable, once you get an idea of how you should work things out. Figure out your budget, bribe when you can and save when you must. All things you bribe become members of your ever-growing kingdom, and bribing and acquiring new monsters and traps unlocks new armor and statues to build. The armor is your all-in-one equipment, since you punch and don’t need swords, so getting new threads that give better stats and powers is ideal. The statues grant you skill points, which then get invested into stats and abilities (like faster recovery from knockout or more money from enemies). The princess can find some statues in levels, but the best ones (which give you multiple skill points) get bought in town. You, ironically, really learn how to use your money in a sense of making yourself more powerful in means that fit you best. There’s a small amount of roleplaying that goes into it, and it could have easily been overlooked by simply focusing on the cash in/cash out idea.

Additionally, the presentation of the game is damn spot on. The semi-pixel art presentation lends itself to what Penny Punching Princess is all about: a mobile game that’s gone big time. This could have easily been a smaller project with a more “tap to win” mentality, but NIS did the right thing by investing a lot more into larger levels, heavier combat and, most importantly, tons of between-the-scenes banter. I don’t know why everyone talks like they’re from the deep countryside of Ireland, but it works, at least in a written sense. The narrator is English is a rich, deep presenter that really does some good “fairy tale” type exposition, and I 200% recommend it over the Japanese narrator, who sounds kind of foppish and uncomfortable by comparison. In fact, the overall audio quality of the game – from the background music to the sound effects of the traps – is pitch perfect for what I was expecting. The only disappointment is a bit of slowdown in handheld mode when there’s a ton of coins and monsters on the screen. I didn’t experience this when docked, and this is a Switch exclusive, so do your best to try it with a tv handy so you don’t get laggy. 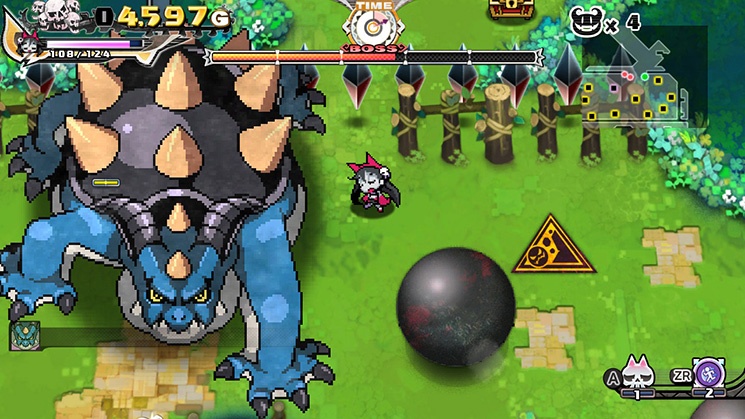 The biggest frustration that players will encounter is the limiting factors of Penny Punching Princess. Everything is capped, again and again, to keep it from getting too simple. You can only have so many power attacks at a time, fair enough. You can only use one calculator charge at a time, okay. But you can also only use one bribed figure at a time. So if you have two charges left on the Green Onioon that you paid off and then decide to get a Heartman into your services (Heartman being a convenient bad guy who heals you), then you lose the remainder of your Green Onioon attacks in favor of not dying. This kind of sucks, because, when you know a boss fight it coming, it would be really handy to have a few grunts in your stable to distract him while you’re trying to charge up and pay off another cannon. Even your wallet has limits, since the armor you wear sets the maximum coin that you can pick up. 2800 coins might seem like a large number, but, when you can only bribe a bit at a time and enemies hemorrhage money, it’s aggravating to see precious moolah disappear into the ether. As a result, you end up needing to grind levels over and over to collect and amass cash to buy stuff in your castle. I’d much rather just be frugal and plan things out well in my normal missions.

But this frustration is only something that occurs in the first couple of chapters. By the time you get to chapter four, you can potentially be hilariously powerful, have great armor and really not even need to bribe as much as before, and then the storyline really gets interesting, as you trot out a new character, Isabella, a zombie aunt, who is less money focused and more combat oriented. I personally preferred to stick with the princess, but that’s because, well, she’s the titular character, and it’s honestly easier to keep bribing baddies instead of exploding them. Penny Punching Princess does a ton to be clever, engaging and not too predictable, and it’s a fantastic fit for the Switch overall. You’ll easily dump 15 hours into the game, probably more if you want to fully unlock the princess and see all there is to see. My one regret is not having that awesome physical edition with the credit card USB drive, but I may consider buying this game again just to have it as physical. After all, if there’s one thing to take away from Penny Punching Princess, it’s that Greed is Good (except for when it’s not).