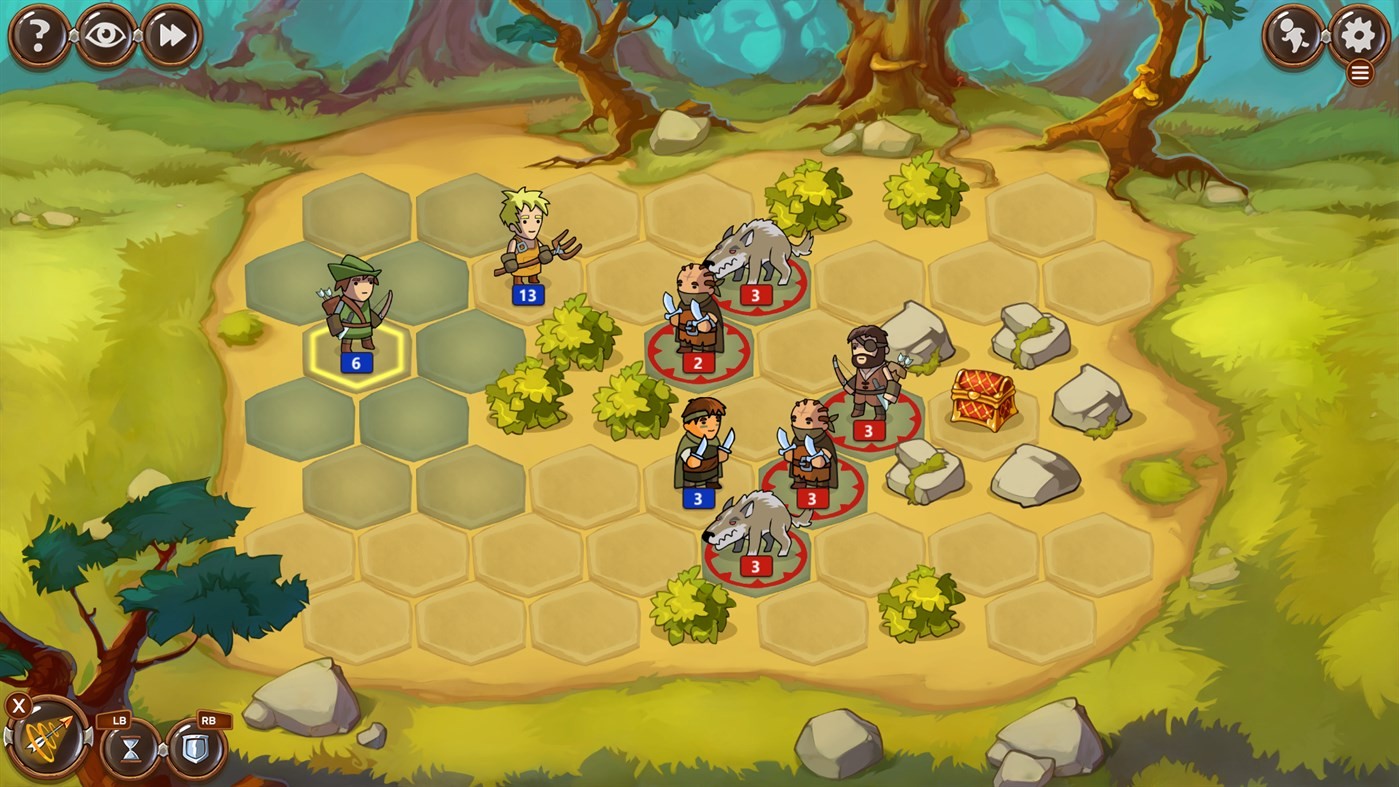 Classic old school RPGs have formed the foundation of my gaming life, the simplistic nature of the gameplay, the easy to follow text narrative, and small closed worlds, make for a relaxing gaming experience. As the gaming industry has grown and technology advances, these ideologies have evolved. From creating massive expanses for people to explore, endless quests to complete, and multilayered stories for players to enjoy. It’s refreshing when a developer goes back to basics and creates a title that takes me back to my teens. Tortuga Team Limited has done just that by creating a turn based adventure/tactical RPG.

Braveland Trilogy is a top down classic experience, where the player must follow a set storyline, across a preordained path. As you move your icon along the map you will come across a mixture of events, battles and shops. Each battle is balanced so that you have a fair chance to be able to succeed, though I found that this wasn’t always guaranteed. The shops allow you to buy items to improve several set character traits, such as defence, attack, and fury. Camps enroute ensure you can purchase new recruits to increase the strength of your army, which in turn improves your chances of winning.

You soon discover that the story unfolds as a text narrative. Unfortunately, if you happen to miss part of it there is no way to return to read the missing information. However, the storyline is pretty easy to follow, so any gaps are not important, and does not impact on your ability to proceed.

As the title implies the game is a trilogy of events, you will experience the time line of a warrior, wizard, and finally a pirate. None of the tales are intertwined and as such felt like they played out more as 3 separate stories as opposed to 3 chapters in a book. Each element followed exactly the same game premise, start on the left hand side of the world map, follow the set path to the final battle, and destroy the end boss. In each Act the game mechanics were technically the same, though the approach was slightly different, and this did help to keep things a little fresher. Like in all RPGs, the main protagonist gain experience when completing a battle, once you have obtained enough points you can choose to level up, and this is where the difference occurred. From simply choosing the ability to improve, to selecting abilities from a skill tree, hardly ground breaking stuff, but it removed the feeling that you were just playing a re-skinned version of the same level. 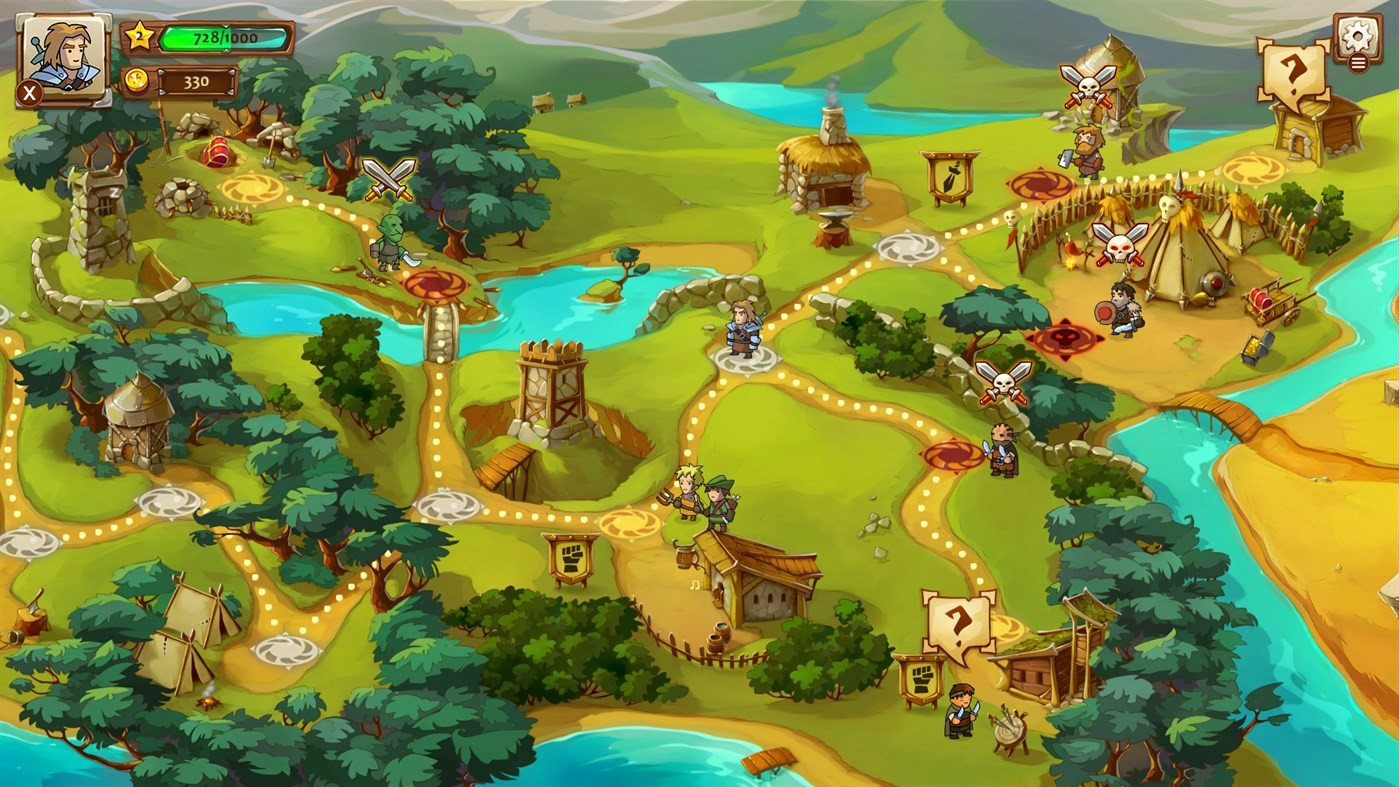 Most of the gaming action takes place on the battlefield, the tile based movement allows the player to take a considered approach to each stage. The troops that you have at your disposal have their own positives and negatives. Wizards, archers, rogues, knights, healers, and peasants are all available. You will quickly identify which army setup you wish to use, and ultimately how you can get the best out of them. Once you understand this, then it simply is a case of rinse and repeat. The environment in each world may alter slightly, but it wasn’t enough to impact you, no matter what enemy I had to encounter I was able to follow the same plan, I rarely lost, and this lack of challenge made it hard to find the desire to want to keep playing.

The story in each act tells a detailed account of a rather basic affair, in a particularly crowded genre, it struggles to stand out from the crowd. Each tale fails to make an impact due to the lack of originality. This isn’t to say that it’s badly written, it’s not. I found that it was just about okay, it developed enough to keep you interested, but it never drove you to empathise with the lead character. Also, when a story is so simple that you can miss key parts and still know what’s happening, then you know it’s not going to get any awards for its writing style.

A 90s aesthetic drives home the nostalgic approach. A small and concise world is well designed, and simple to look at. The environment matches the theme of each story. The colour palette used isn’t expansive, but it works well and is relatively pleasant to look at. The character models are detailed, and are easy on the eye. As each story unfolds, it was obvious that the developers utilised the same design, this was a little disappointing and made the game feel and look a little repetitive. The tabletop perspective makes the action easy to follow, every level is as basic as you can imagine, a few natural obstacles adorn the land, but have very little impact on the gameplay. 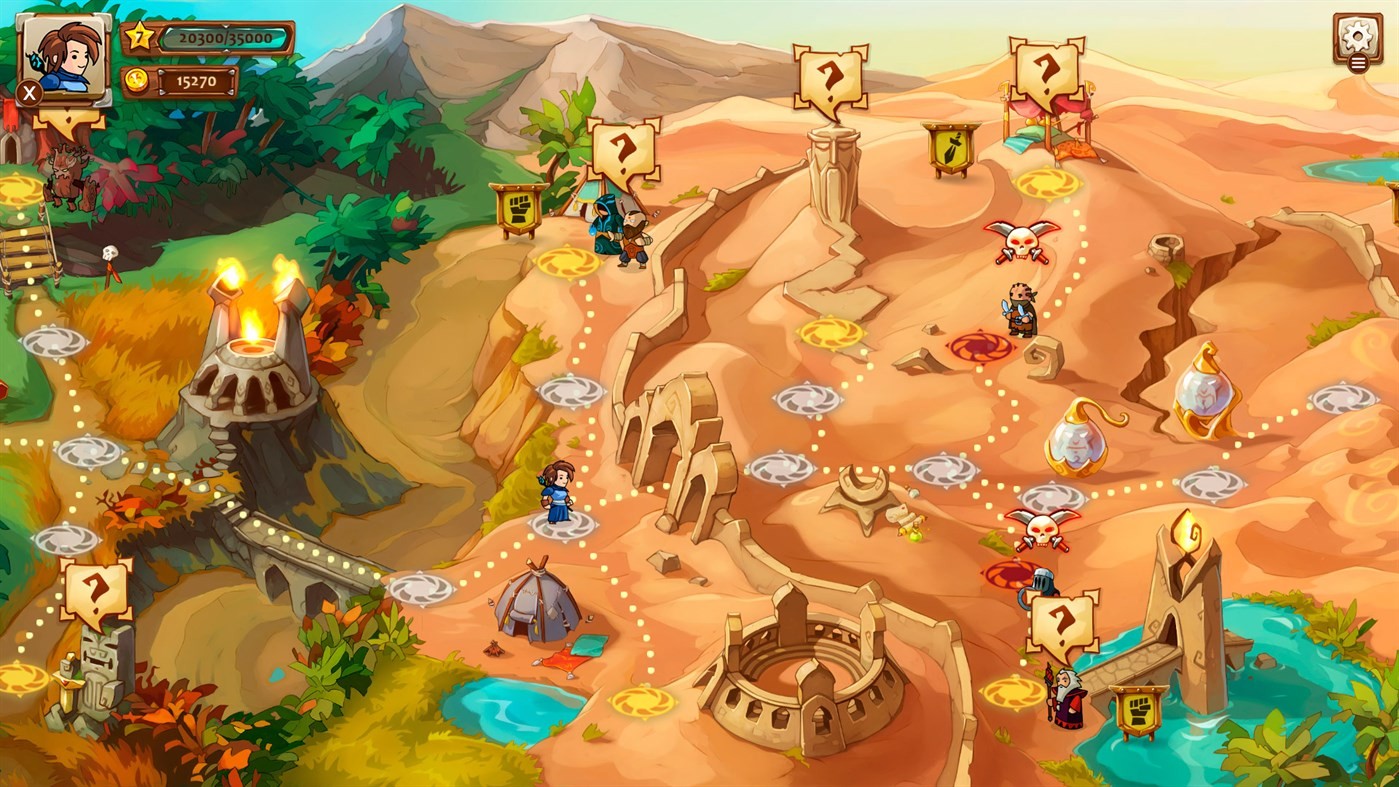 I still remember the soundtracks from a number of the RPGs that I played growing up, can Braveland Trilogy stack up against the games from my childhood? Unfortunately not. An upbeat soundtrack plays in the background while you endeavour to win a battle, the tempo contradicts the pace of the game, and creates an odd experience. The music itself doesn’t really add suspense or drama, and falls short of what I would expect from a game in this genre. On the other hand the sound effects worked perfectly, the noise of the completed actions match their tasks well. With a lack of cinematic, or voice narrative all the emotion has to come from the audio. Due to the disconnected nature of the music to gameplay I felt quite alienated from the action, and failed to make any form of emotional attachment to the characters. As such, playing each chapter felt very robotic, there was no desire to push on to see whether the main protagonists achieved their goals. To be blunt, I wasn’t fussed either way, finishing the game was more about getting the achievements, than seeing how the story played out.

Most of the early console RPGs were extremely simple to play. They had to be, the controllers that were available were limited, the developers have replicated this within this title. The button mapping is easy to learn, as you start each story you are given the same simple tutorial. The user interface is sparse and you are given a few choices to customise your character. The game mechanics are straightforward to understand, therefore, experienced players, and those new to the genre will be able to pick this up and play it without too many problems.

Whenever I look at a title in this genre, I expect to have to invest a lot of time. I also assume that there will be a fair replay value. With 3 chapters to work through, and a number of difficulty based achievements you’ll be looking at around 15 to 20 hours to finish it. Most of the action was a repeat of what had been seen from previous chapters, making a playthrough quite tedious. Tortuga Team Limited could have easily avoided this by creating a number of different character models for each part of the story. Though I didn’t dislike playing this, I don’t have any desire to want to run through it all again, as it wasn’t in depth enough for my liking.

Braveland Trilogy isn’t a terrible game by any stretch of the imagination, it just missed the mark on a number of key elements. A repetitive and simple story will not inspire you to want to keep playing, and the music failed to input any energy or emotion. I found that the graphics perfectly replicated the Role Playing Games of the 90s. If you are an avid fan of the more basic titles of the genre, then there will certainly be room for this in your collection, but I just feel there are better examples for you to invest your time into, such as Banner Saga 3. If you do decide to take the plunge and invest, then best of luck. Just remember you must take control of each hero to save the world from the evil within.

Three separate stories make up this retro RPG Trilogy. Take control of a warrior, wizard or pirate to overcome the evil within each land.