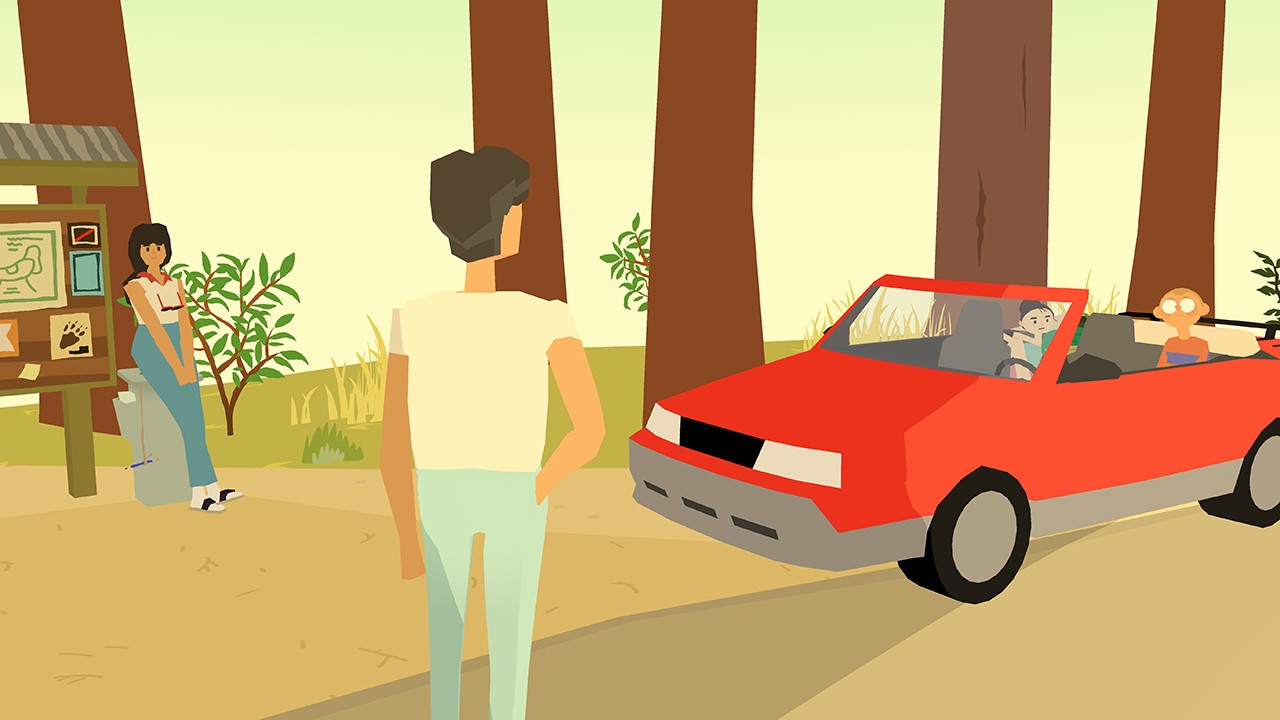 How long does it take to pitch a tent? It’s been ages since my last camping adventure – I don’t seem to recall. I’m guessing 20-30 minutes for the average two person-type thing, or maybe a little bit more. Generally speaking though, it’s over quite quickly – like Wide Ocean Big Jacket, which I would wager I could finish before you’ve finished putting in the pegs.

How to put down my thoughts into a review has taken significantly longer than the playthrough: I don’t entirely know what to think. The goal is always to give a fair criticism, but it’s a buyer’s guide to some degree, and if I didn’t have to conclude with a rating at the end, I’d find this much easier, so I’ll say this now: Wide Ocean Big Jacket feels incomplete and not a title that will go down as a must buy. But let’s not be hasty. Let me tell you all about it. I’ll bring the marshmallows.

There are four characters in Wide Ocean Big Jacket, and each one is playable as you switch between them as the story progresses. It consists of Colanne, Brad, Mord and Ben. Colanne is Mord’s aunt, Brad is married to Colanne and Ben is Mord’s boyfriend. The adult couple has invited the teens to an overnight stay in the wilderness. There’s no underlying story of any of them getting away due to a death in the family, someone losing their job or some life-changing experience. They go because, well, they can and there needn’t be a catalyst. Camping is fun.

Colanne and Brad are the veterans here – often camping and taking their glowing skeleton with them. Mord is along for the ride and it just so happens that she has a boyfriend who comes along. I guess this is a spoiler, so skip the remainder of the paragraph if you like.  Nothing happens. There are a couple of themes touched upon about having a family and losing one’s virginity, but it’s a brief discussion, and that’s it. There aren’t any moments of suspense, danger or problem-solving. 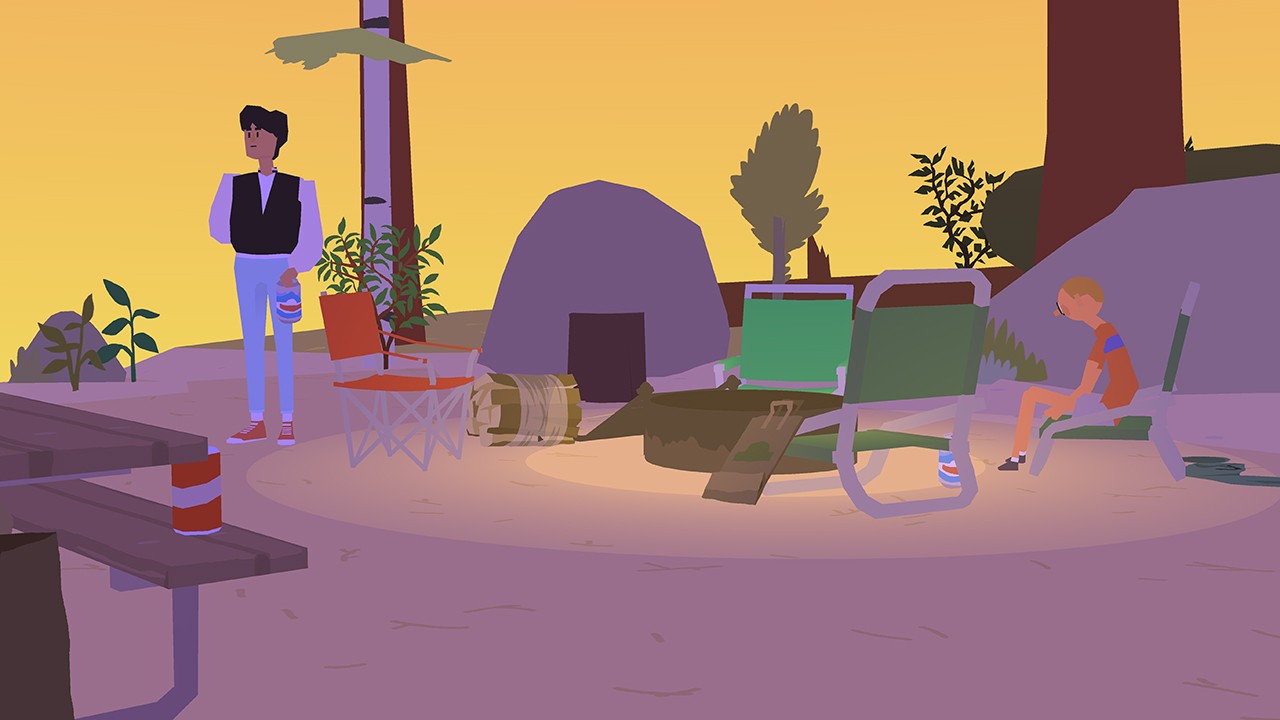 As soon as you begin, you move the joystick to view the other characters. Their name shows up in a bold text, and you action a conversation – there are no other controls, just one button. Cut to a title card of sorts, and you’ll see the name of the character, their profile and some dialogue. The screen is entirely black, and the profile and text are white – it goes from a vibrant landscape to the polar opposite. There aren’t any dialogue choices – you just read through the section then once it’s over, look at the next person. This goes on for a while until you are then able to move, but the playing area is tiny, and you only have one thing to do: walk to the person and start the dialogue again.

To balance things up, as I appreciate this is going to sound like a negative review, the dialogue is brilliant and easily the best part of the game. That’s not saying much, but there were numerous times that I was going to bail on it and play later, but wanted to read through the exchanges. They’re very witty and capture the characters so well. Unfortunately, it’s so vague and no opportunity to delve deep. I liked the story and the way the characters interact with one another, but Wide Ocean Big Jacket feels more like an idea and far from a game. The narrative could quickly expand into a very decent book or animation, but as a game? No.

Realising that this was mostly a visual novel and I had to go where I was told, I was given my first path: where to pee. Playing as Mord, I had the option of going into the bushes or using the toilet. I went outside and was foiled, so headed to the toilets to get text appear asking if I was sure. Maybe something’s going to happen here…? No. My choice had no impact. An encounter with some teens looked like the story was going to go sour and end up like Firewatch, but that never materialised either.

Before starting the game, I had a quick look at the options as I often have the subtitles on in a game so I don’t miss anything. Other than a few standard options, there was a section that listed the chapters in the game. I assumed that these would unlock as the game progresses, but they were all listed – all 20 of them. When I was having a moment of ‘I need to put this down’, I headed into the chapters section and saw that I was on the 14th chapter at around 30 minutes or so into the game. A further 15 or so minutes, and it was over. I hadn’t rushed Wide Ocean Big Jacket at all, but it was over so quickly that I couldn’t justify the asking price. As a concept, this is pretty good and with the characters and dialogue, had a lot of potential. 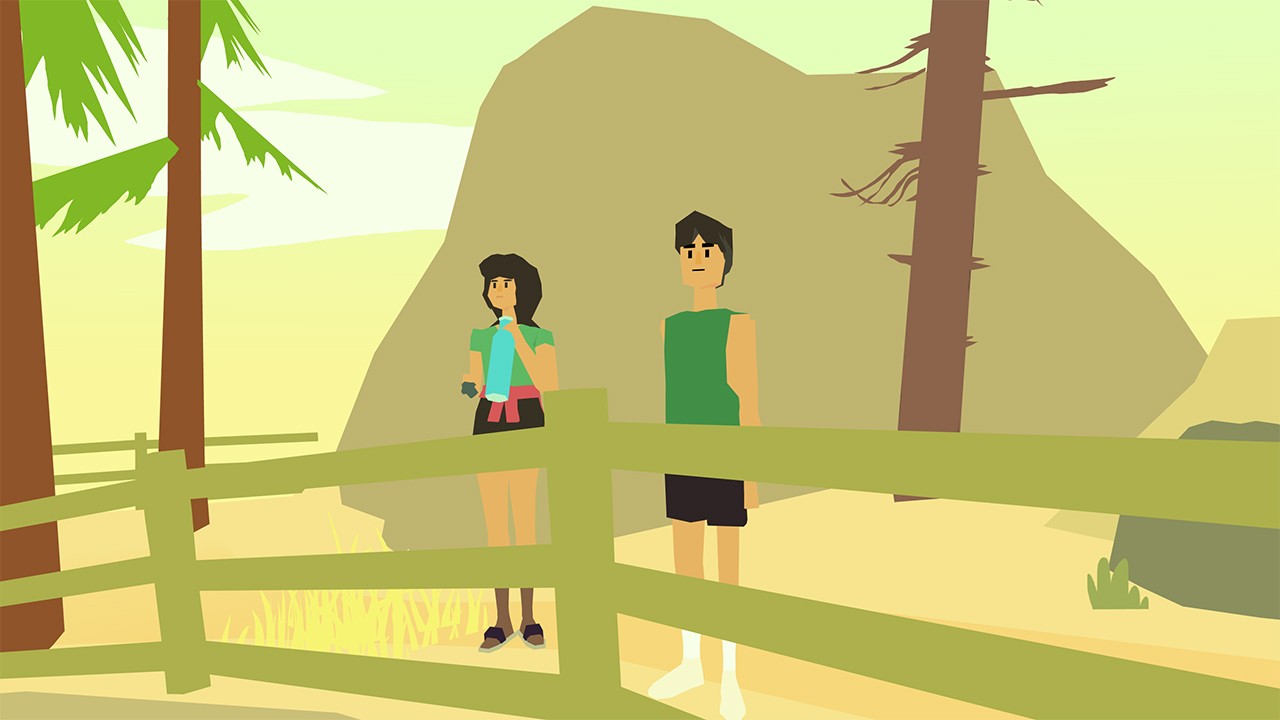 I had highlighted Wide Ocean Big Jacket as one to watch, as I had seen screenshots and read the idea, thinking this would be worth looking into. While the colours pop, the animation is erratic. Characters will awkwardly speed up and slow down, walking through the very few objects in the game; half appearing in their tent or walking part of the way through the car when unloading it. I also noticed that when walking forward, the characters would momentarily turn back – if only for a second and you would see them look back at you as if there was a glitch. There isn’t any voice acting, just a difference in sound for when someone is speaking.

It’s a small team who made the game. While I’m pro-indie games, Wide Ocean Big Jacket made me question if it was ready to be released. There are a few graphical glitches, but it’s the lack of any real interactivity as there’s one path to go. For a camping trip, they only do one night. If we had stayed with the group for another night and explored the themes touched upon, this could have been a lot better. Instead, there are sections where you play Colanne looking for birds with a ropey viewfinder. It doesn’t add to the story and is hardly a visual treat.

I genuinely wanted to like this a lot more than I did. If I were rating the dialogue and potential of character development, it would get an ‘8’, but I have to factor in the other elements. It lacks any finesse with the graphic side of things and it’s far from a journey. Most people would take the time it takes to finish the game on a trip to a campsite. If the price tag dropped significantly, then it’s worth the experience for the exchanges between characters, just don’t expect any freedom – it’s the complete opposite of being out in nature.

Reluctantly, I would have to say wait for a sale if this remotely whets your appetite. A good story with excellent conversations, but lacks a memorable experience due to the gameplay restraints.