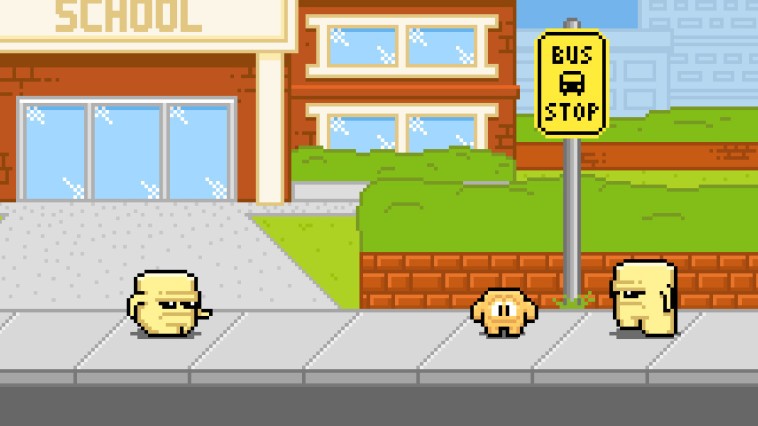 Retro gaming, besides being forever lauded and pedestaled by gamers who grew up in the era, also tends to be viewed through rose colored glasses. Sure, we have plenty of critics and general players who can recognize the truly broken and unfair titles that live on in infamy, but the entire concept of “classic gaming” gets a pass because it’s what we grew up with, we didn’t know anything could be better and it occurred while we were young and eager for entertainment. When a lot of developers capture the “retro” feel in their titles, they still make a point to update some aspect of it to keep it modern, but with a historic feel, to combine the best of both worlds. When you make something today that truly could have existed twenty or thirty years ago, you suddenly remember that there’s a reason that gaming evolved to where it is today.

Squareboy Vs. Bullies: Arena Edition is the latest port from Ratalaika Games and brings a semi-popular title from mobile to the Switch. In this title, you play the titular Squareboy, who gets jacked for his lunch money at the beginning of the game by the Bullies, who are giant, square bullies. You immediately head to the nearest dojo, get some training from a sensei, and then proceed to beat up every bully ever. It’s the plot of several 80s movies boiled down to its purest essence, and I’m not complaining about that. Setting the stage for a beat-em-up is certainly more than some games do (looking at you, vast majority of NEO GEO brawlers), and Squareboy, to his credit, maintains a narrative throughout so you know he isn’t just aimlessly fighting places.

Squareboy Vs. Bullies is meant to emulate the classic beat-em-up experience from the 8 bit generation, and I would say that the developers succeeded wildly in that aspect. You can move anywhere on the screen to engage with a series of differently powered bullies, jumping is a thing and you only have one attack button that changes depending on arrow combinations pressed. Uppercuts, leg sweeps and dash attacks (oh, the dash attack) are all available, and bullies come in multiple waves, sometimes four at a time, and will fight you in a variety of ways. 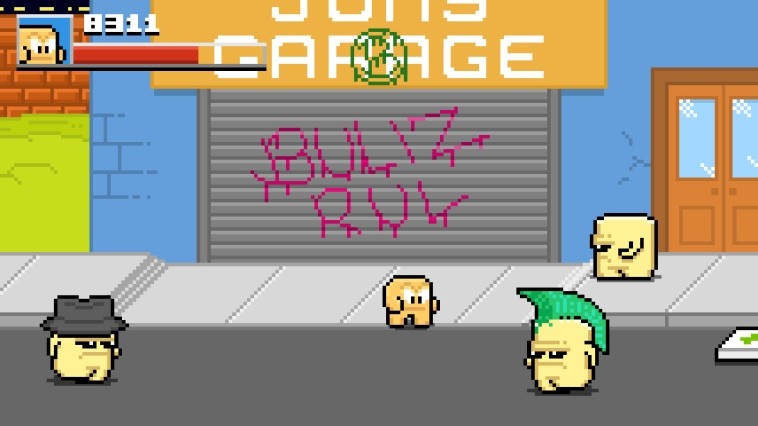 Squareboy really does justice to capturing the oldschool game element in this aspect: there’s a good number of types of bullies, from the simple cretins to mohawked thugs and even ninjas, but it’s very evident they’re all the same base model with some slight flair changes. The levels are simplified backdrops (alleys, ship hulls, docks) that don’t really have any obstacles or traps, but they do incorporate a fair number of things that you can simply throw at the bullies.

The combat is decent, but you quickly learn that, surprise, bullies don’t fight fair. There’s one or two of you (yay co-op!) and more than a few bullies. It’s very common to be wailing on one bully when suddenly another is behind you, throwing baseballs or hitting you with a bike chain. You can counter when you get overwhelmed with a spinning uppercut, but you still need to take damage in the meantime. Eventually, you have to develop one strategy or another: either get really good at isolating bullies and being fast to break combos deal with others, or dashing.

The dash attack is the bread and butter of someone who just wants to beat the game. It covers several squares, the bullies can’t block, and there’s literally one enemy who it isn’t effective against. You can hit all the bullies in a row at once, and another dash can be readied by the time they recover. I think the dash attack is all I did for several stages, and I should feel bad, but I don’t. Why on earth would you use your fists when there’s a powerful move with no cooldown that you can throw again and again?

Also, ONE OF THE BULLIES HAS A GUN. Seriously! Squareboy can’t block bullets. If a bully throws a baseball or a wrench, I can sometimes hit it with a dropped baseball bat, and the shuriken at least make sense because ninjas, but why is there a gun toting bully? If someone is shooting at you, don’t take karate lessons, call the cops. 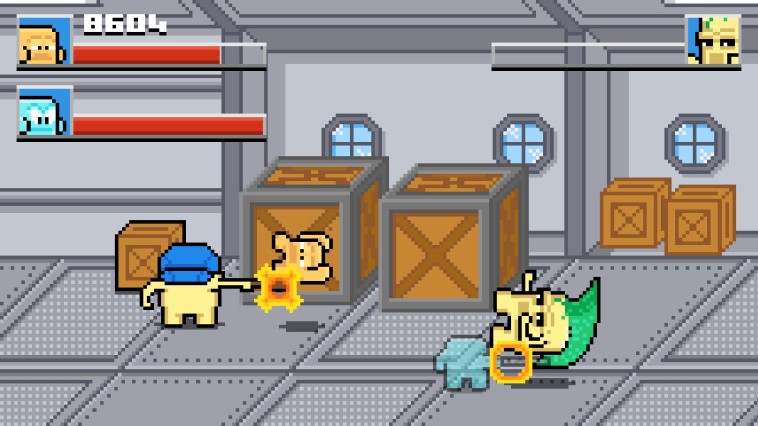 I also tend to praise chiptune music, but that’s because a lot of modern composers have access to tons of software and hardware that allow you to create depth, emotion and tone through psuedo elements of yesteryear. Squareboy Vs. Bullies actually manages to capture the singular style of chiptune that used to be available, which is to say some really flat, simple, chirpy music. I can’t say that I like it, but I do respect it, because, more than anything, I think it captures the tonality and musical range of how games used to sound.

Besides co-op, Squareboy Vs. Bullies: Arena Edition also has, well, an arena, where you or two people can bust heads in a small stage to your heart’s desire. There are several arenas to unlock, and I think the developers realized the inherent flaw in their main story mode, because the bullies seem to be more aware and come at you in different patterns, utilizing a little more strategy to come at you and your friend. If you are super into the classic street fight motif, this is where you’re going to find the most joy, after completing the decently long but still pretty short story mode.

Additionally, there are achievements to be unlocked, but there was only one that I didn’t unlock naturally through playing, and it’s because I didn’t realize the tire was also a weapon. Everything else, in the course of naturally going through the story mode, will be accomplished. I guarantee it.

If you’re one of the people who enjoyed Squareboy Vs. Bullies on your mobile device, you’ll find this Switch port is more robust in terms of control, has a few extra goodies baked in and is a lot nicer to look at without ads or popups asking for in app purchase unlocks. However, in terms of simply being a Switch game, there’s a bit to be desired for replayability. Now that I’ve done the whole story, I’m not compelled to go back and play again. The arena mode is ok but it’s not my favorite and I wouldn’t buy the game just for that. The end result is something “ok.” It’s not terrible, but it’s also not world star. Pick it up if you’re looking for a light game for the afternoon and not much longer.