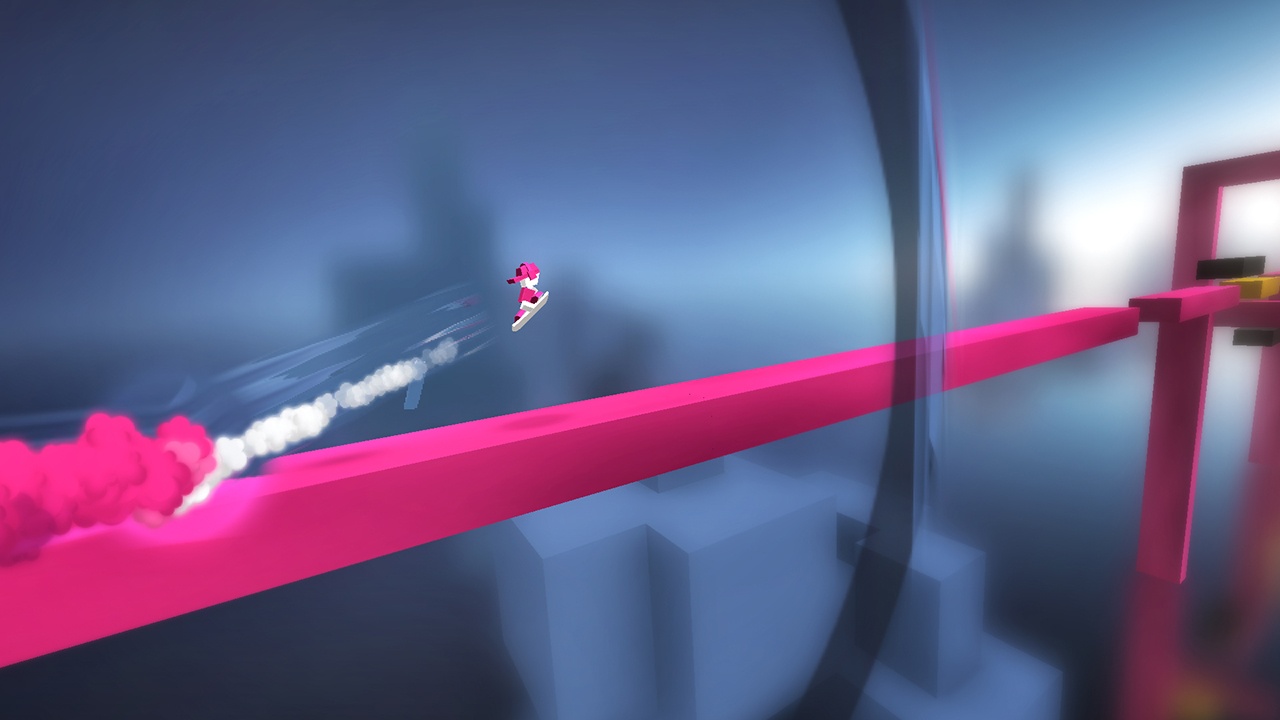 The onslaught of mobile games coming to the Switch continues, and I don’t think we’re in a position to see it stop anytime soon. And it’s understandable: not a lot of people wanted to develop for the WiiU, a ton of WiiWare titles got ported elsewhere, and the strength and appeal of smartphone and tablet gaming has only beefed up since its inception. The latest release is a title called Chameleon Run, which comes to the Switch in the Deluxe Edition flavor. Is this limited runner a new addition to the “interested” pile for the eShop’s sprawling scene, or another forgettable entry that immediately gets swept over in the massive tide of releases?

At the core, Chameleon Run comes at us with a concept that isn’t exactly new, but still has a bit of flair to it. Basically, it’s an auto runner where you run along a flooring that’s one of two colors, either pink or orange. Your character can only touch the same colored ground or it’s instant explosion and game over. There’s also the sporadically placed black floor which, surprise, will kill you as well. Thankfully, there’s a bit of physics in all of this, giving a variety of see saws, swings, rotating platforms and various stop gaps to keep things interested. Chameleon Run also utilizes a decent jump action, allowing for both double jumps from land and also free-fall double jumps. I always like games that allow for the dispel of reality: taking away a jump counter just because you’re not touching the ground seems silly because, hint, it’s already a video game, you can’t double jump in real life anyways. The falling double jump is incredibly effective, as you’ll have more than a few levels that require you to time things just right in threading certain needles. 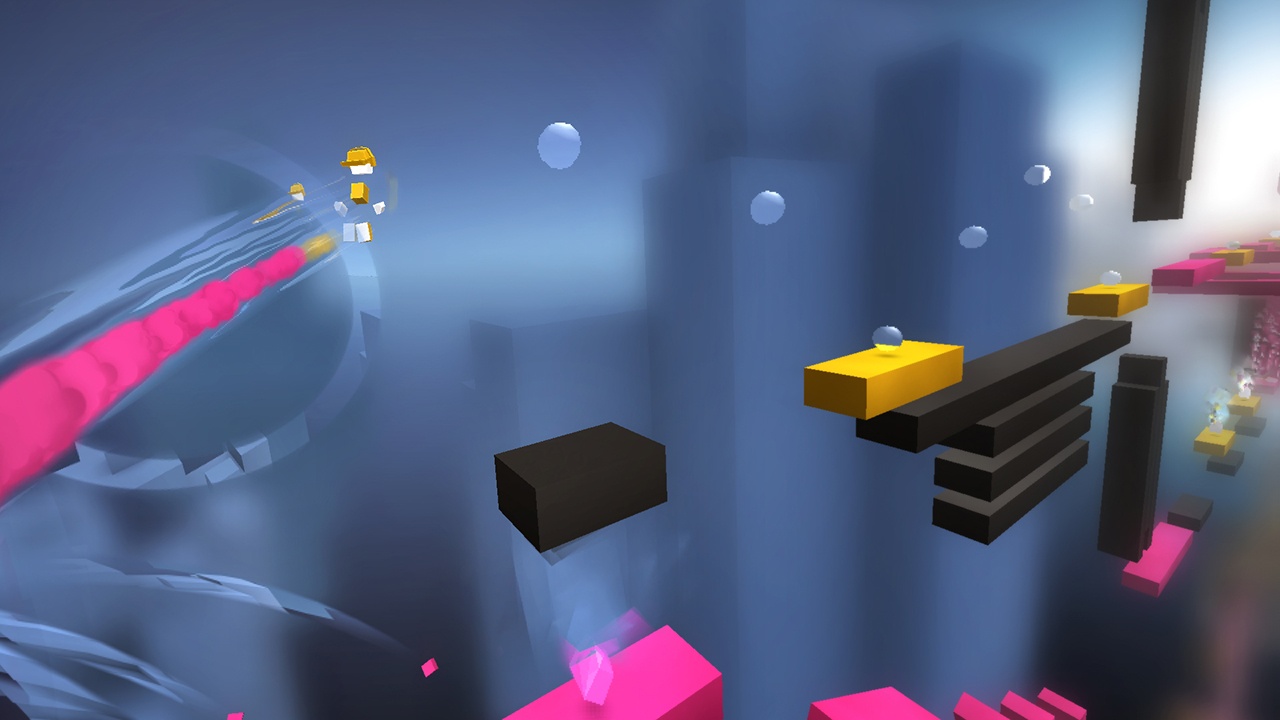 Mechanically, Chameleon Run does a fantastic job of keeping the game engaging and challenging. After the first couple of stages, you quickly realize that you need to be right and tight on the buttons. I never got a chance to play this on my phone, but having the two necessary controls (jump and color change) bound to physical buttons seems to be the only way to play. There are so many instances where you need to time jump, change, land, change, jump in any variety of sequence that I probably would have smashed my phone. The controls are, to their credit, incredibly tight, allowing for split-second reactions without a lot of flashy overlay to distract from things. Players who have done runners before might feel pretty cocky after they get down the basics, especially because anyone worth their salt will figure out the double jump long before it’s  “introduced” in the second world. However, the game quickly scales up the difficulty, plateauing a bit higher than normal right in the second world and then gradually ramping up higher as they get towards later stages. In terms of difficulty curve and engagement, Chameleon Run is fairly spot on and enjoyable. Once the surf/snowboard is introduced and things start to get incredibly frenetic and twitchy, it’s easy to see how this game sucks you in and keeps you going all the way to the end.

Additionally, the graphics are quite enjoyable and clean as well. You could have gone in any number of directions with this game, but there’s a lot of subtlety in the design. The colorful cloud that your character kicks up as he runs along creates a nice effect, and, again, the swap between shades is seamless, fast and without fanfare. Even though everything is in shades of orange, pink and black, you still get a really good feel for what Hyperbolic Magnetism was going for in each and every level. It’s clear this was a passion project, and it’s been executed extremely well in terms of overall architecture and porting. This doesn’t feel like a mobile game: it comes across like it was designed specifically for the casual crowd on the Switch, and that’s pretty welcome in an age of slapdash, fast-and-dirty ports. 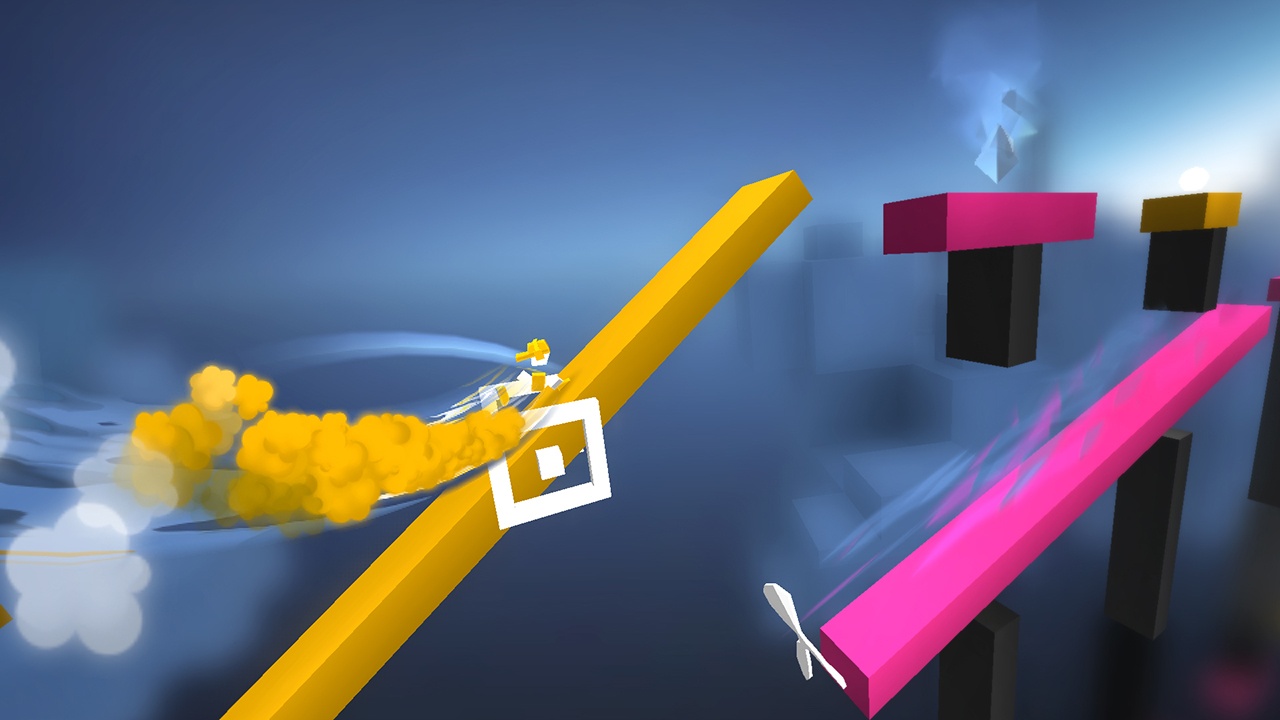 However, one of the flaws of Chameleon Run is the unlock system. In order to progress further in the game, you have to get Chameleon points that come from achieving goals in each level. They’re the same three goals in each: get all the smoky crystals, get all the clear orbs, and finish without changing color. The problem is that it’s impossible to do things against the grain of the game’s intention. So, for example, I was able, in a few different stages, to complete the level without changing color before I got the other items. Cool, right? Wrong. The game refused to acknowledge my skill, only giving me credit after I went back and first collected all the items. The crystals and orbs are positioned so it’s impossible to collect all the stuff in a single run, so that’s just an impasse as it is, but I’m personally affronted that I can’t get the changeless achievement until I do the others. Of course, there are levels where it’s specifically made that certain blocks and floors are “locked” (black) until you do the other achievements, so allocations are made in that sense. But still, if a player can figure out how to do it preemptively, they should be rewarded.

Another is the Deluxe moniker for Chameleon Run on the Switch. Don’t get me wrong, I can see a lot of work went into making this polished, clean and running well for a console version. And I do appreciate the additional levels that went into this, but there simply aren’t many. Maybe Noodlecake didn’t think anything more needed to be included for players to be fully onboard with this port. Well, there is the new fourth achievement for each stage, but here’s the rub: you can only complete this achievement after you beat the whole game. So, for people coming over from mobile who are interested, that means you have to beat all the old stages again, doing all the achievements again, and then you can….go back and do all the old stages again. It’s a lot of forced repetition, and, unless you’re 200% on board with the concept, you might find things getting boring quite fast.

Overall, Chameleon Run Deluxe Edition is a shiny happy port for the Switch, and the extra content more than makes it worthwhile for fans of the genre. It’s a little steep at $5.99, but that doesn’t totally dissolve the relevance or interest players might have in the game. If you like auto runners with some flair and puzzle elements, then I think you’d find a fair amount of enjoyment within. However, if you’re looking for a game that goes any deeper than skin, you’re going to be a bit disappointed.