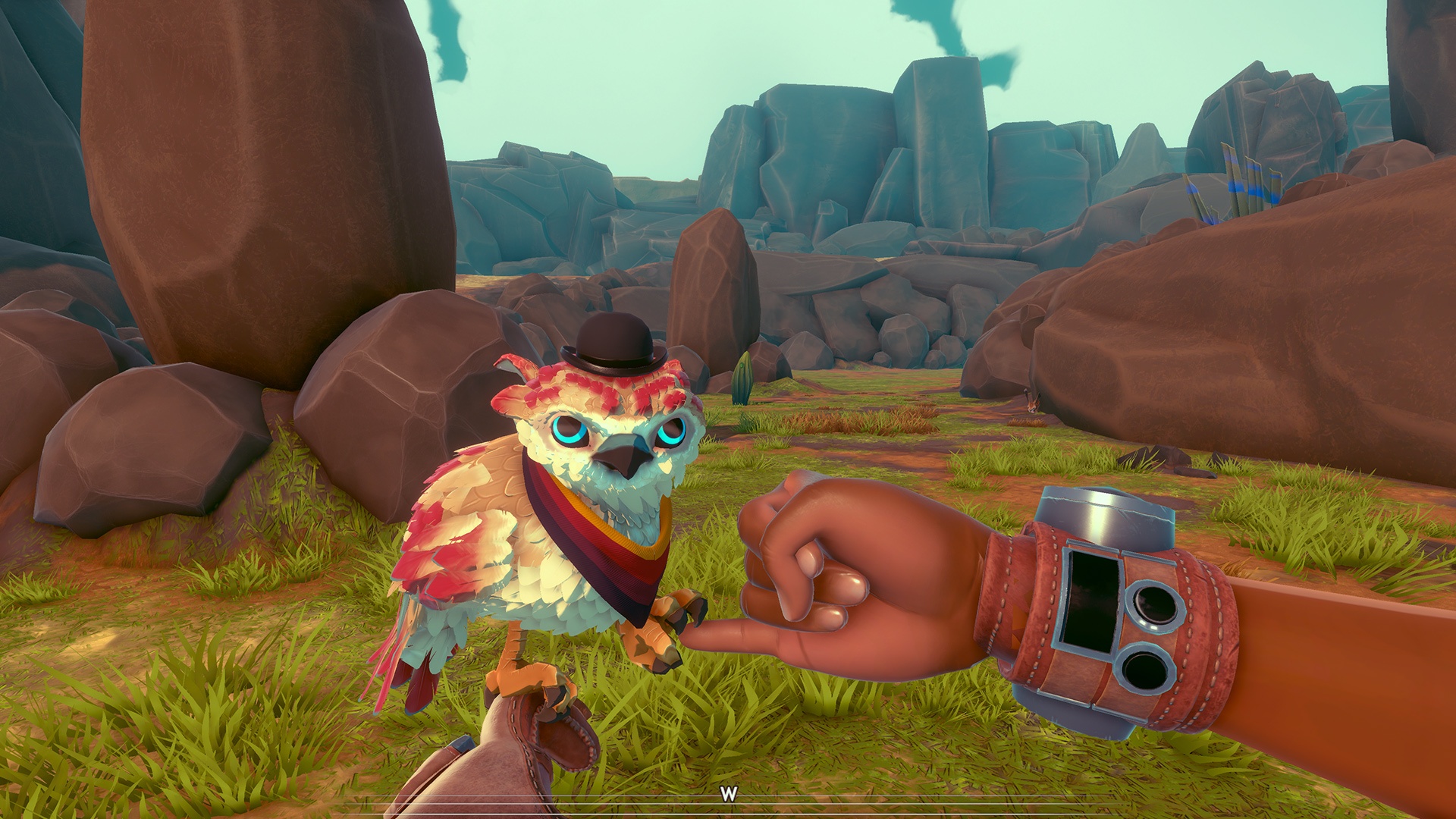 Have you ever wanted to own and care for a falcon without any of the expenses, bodily risk or time investment of becoming a falconer? Falcon Age allows you to feed, dress up, and hunt alongside your very own bird of prey without having to leave your couch.

Falcon Age is set in a universe where humanity has taken to colonizing other planets. On the surface things are utopian, but for those like your character, Ara, who are the human labour used in camps to mine resources in what are called rehabilitation camps, things are a very different story. Through Ara’s eyes, you can see the plight of the people living outside of the Outer Ring Company’s utopia–people who are suffering the effects of pollution, for example. It seems like Falcon Age could have had great, culturally relevant commentary, but that’s not really explored. At the opening of Falcon Age, Ara, who just so happens to be one in a line of falcon hunters (which is a confusing term considering they don’t hunt falcons, but rather use falcons TO hunt) comes into possession of a baby falcon. From there, you bond with your feathered friend and explore a planet inhabited by pockets of humanity, wild animals, and vicious robots. ​That sounds great on paper, but Falcon Age may be too ambitious a project for a small indie team.

Falcon Age’s drawbacks begin with the pacing. The falcon raising aspect of the game is very short-lived. Once you escape the labour camp, your baby bird becomes a fully-fledged falcon without even a montage of heartwarming bonding moments which, to me, discounted the relationship I supposedly share with this wild creature-turned-pet. You can feed your falcon once it’s fully grown, but that has nothing to do with taming or nurturing a wild creature and everything to do with restoring health. To make matters worse, when you “earn” the right to name your bird, you’re able to choose from a list of 5 foreign sounding names that you’ll never hear again from that moment. There were so many opportunities to create a lasting bond between you and your avian charge, but Falcon Age fails to take advantage–which seems counterproductive considering the experience it promises to deliver. 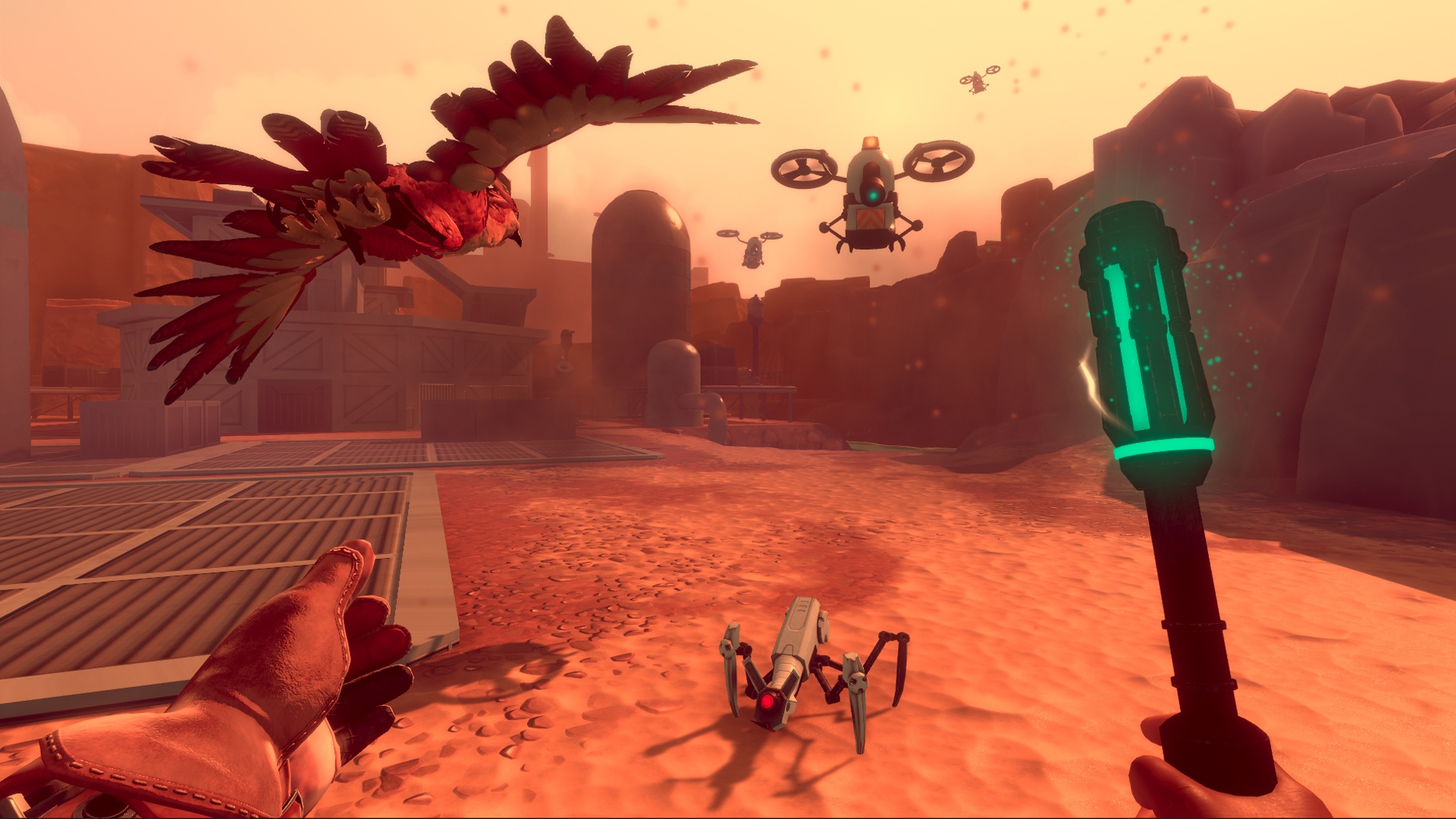 On that note, Falcon Age will take you about three hours to complete if you don’t skip over combat segments and even in that brief span of time it manages to overstay its welcome. You shouldn’t get bored while playing a video game, and yet I found myself sighing at the tedium of it all as I trekked across the same map and fought the same enemies, funnelled along by a linear storyline that made the already small world seem smaller still. Combat is a matter tag teaming robotic foes with your falcon, relying on her to knock them off-balance and then delivering the killing blow yourself. This sounds fun… Except it’s not. Blows are weightless and sound tinny, sucking the fun out of murdering bots. Directing your falcon oftentimes takes longer than necessary depending on where she’s flying in relation to where you’re standing and sometimes having her swoop attack a foe can result in pointing, clicking, and tapping your foot impatiently while waiting for her to show up. It’s not a streamlined process and it makes some fights–which usually only take a few seconds–drag on unnecessarily.​ ​Enemies also randomly respawn, leading to frustration when having to backtrack–and you will a lot.

​There’s some equipment management… Okay, there’s two pieces of equipment you’ll ever need to buy. Everything else is handed to you over the course of the story. You can purchase vanity items to dress up your falcon, which is cute, but to acquire them is a grind for funds which is neither fun nor interesting–nor is the trade-off worth it.

If you play in imprint mode, which renders combat optional, there’s almost no reason to wander the desert. There are no puzzles or the like barring your way when completing the story, so unless you’re content with pointing, clicking, and waiting for your falcon to hunt wild animals, crafting snacks by adding three materials to a synthesizer, and gardening, there’s not much to do.

There’s a couple of mini games to play, including lightning golf which utilizes the whip function of your baton, but these don’t do much to change things up. When you consider the controls, which relies on your distance from the ball and some crazy internal mathematical problem solving in order to flick your wrist at the right angle from the right distance, these potential diversions become exercises in frustration. Gardening in Falcon Age is as basic as it can get. Once you plant your produce in the very limited 2×2 plots designated for this activity, the plant will grow after about ten seconds and you can harvest the fruits of your labour. Rinse, wash, and repeat. Once again, this feature is disappointingly simple and could have benefited from further development. 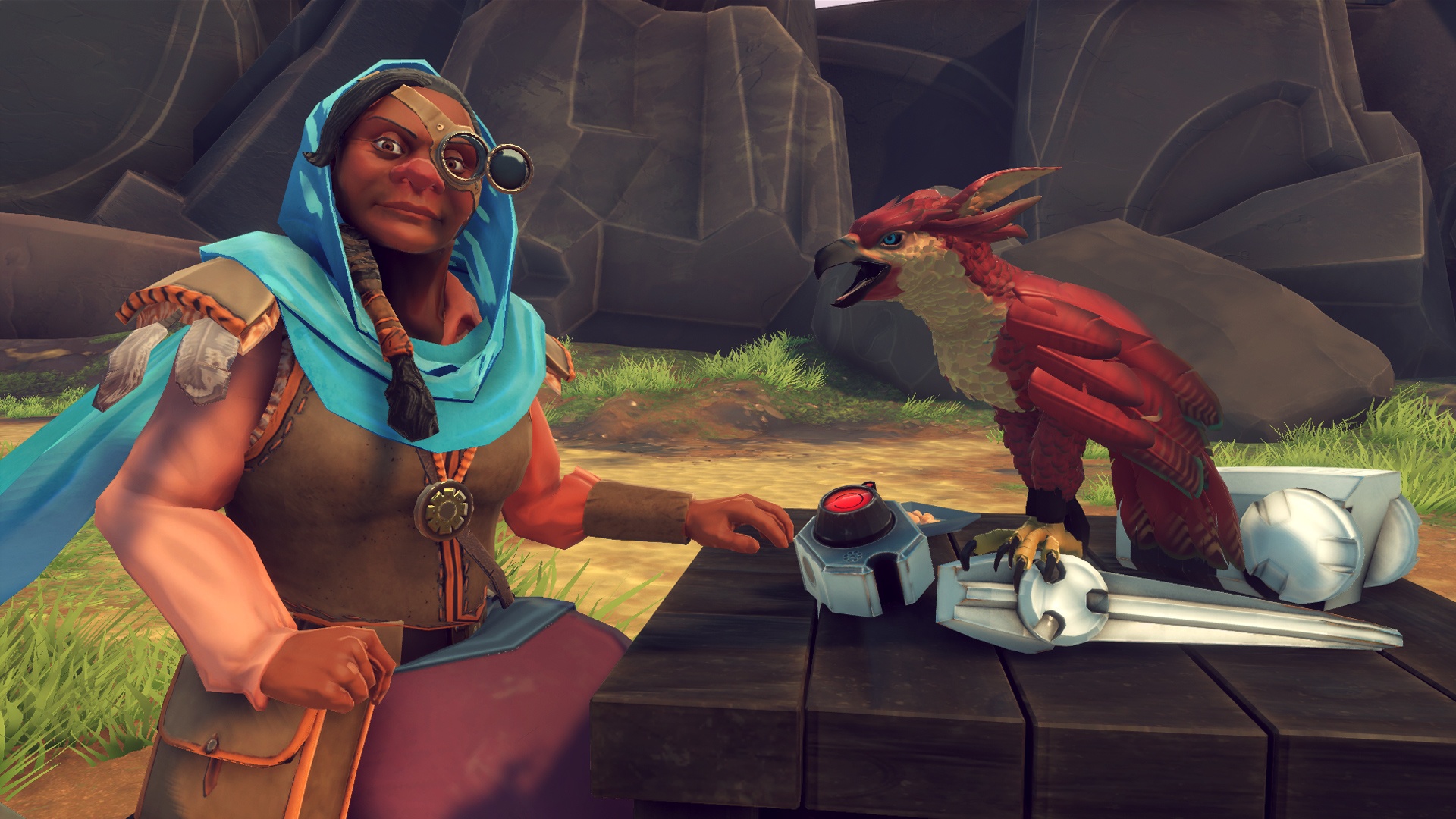 ​In VR, Falcon Age is only a hair better. Presentation is much cleaner, though the controls are pretty confusing–especially coming from standard controls. You’ll need two Move controllers (one for each hand) and you walk by holding down the Move button. Being able to alter your direction by turning your head is pretty cool at first, but can become a literal pain in the neck. You can also orient yourself using the face buttons, but that’s not a smooth turn but rather like looking at another monitor in a panel of camera screens. There’s an alternate control method that allows you to “teleport” to where you click, but this will definitely not he accessible for people prone to dizziness. Other functions, like being able to reach out and pet your falcon or drop items directly into your pack are a nice touch.

There’s absolutely no replay value after the credits roll and don’t get me started on the way the game ends. It was just insult to injury after a not so wild ride. There was a patch during my time with the game that added additional outfits for my falcon, but I felt no desire to grind for the game’s currency no matter how silly a falcon looks with a backwards baseball cap.

Falcon Age begins as a novel idea and is therefore fun–at first. What begins as an exploratory journey alongside an animal companion swiftly becomes a slog through the same boring environments while directing your falcon like a yo-yo. There’s only so far charm can take you and, unfortunately, it’s not enough to take you through the last few hours of the game after the novelty has worn off. Even the added immersion of a VR headset can’t save Falcon Age from falling into a gameplay rut and that’s a shame because what the game has in heart, it lacks in soul.

​Falcon Age allows you to feed, dress up, and hunt alongside your very own bird of prey without having to leave your couch.