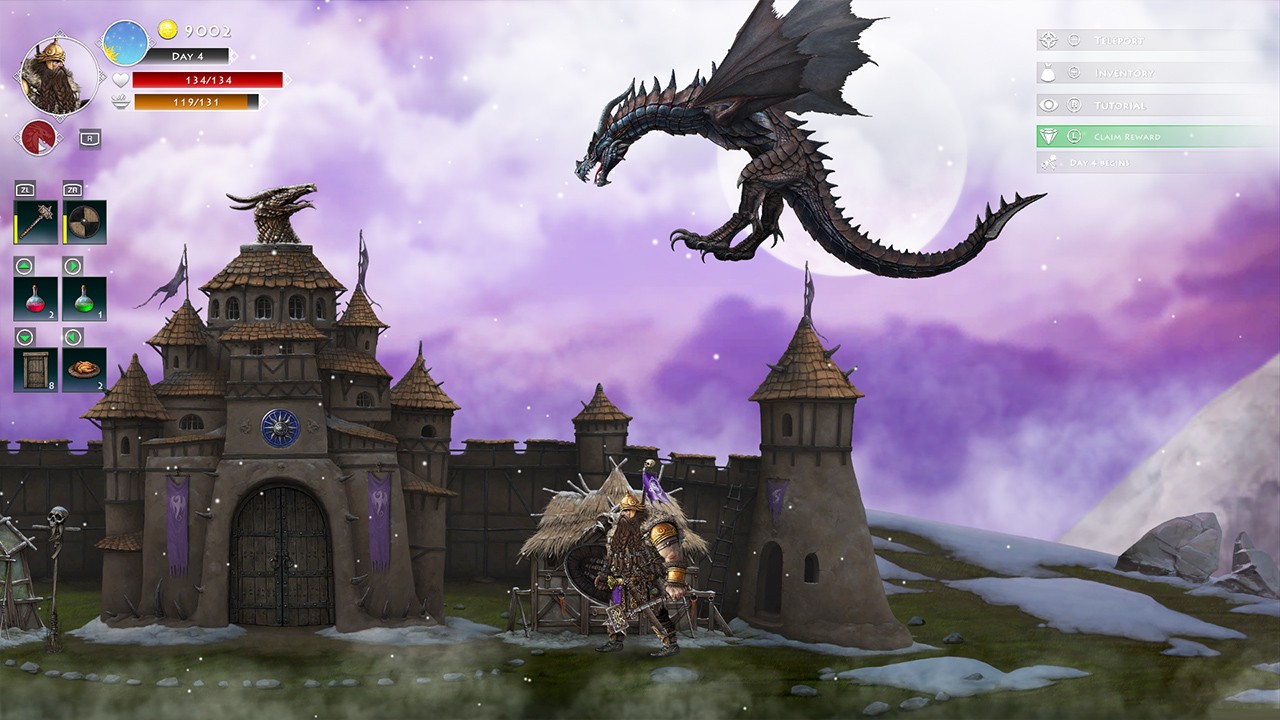 When it comes to the mystical worlds of fantasy and legend, the mythological beliefs of Ancient Europeans usually provide the inspirations for such settings. From the Greek Gods of the Pantheon to the Gladitorial realms of the Romans, their historical values have long provided the inspiration behind many of the video games that we play today. However, when it comes to tales of the afterlife, there’s no greater mythology than those of the Vikings and it’s something that’s explored in Ellada Games’ Niffelheim as it ventures a release onto the Nintendo Switch.

The game follows your undead state, as after falling in glorious battle, your body transcends on a journey to the fabled paradise of Asgard; the Viking’s home of the Gods. However, along the way, your body is abducted by an evil that floats between realms and instead of joining your fallen comrades, you end up in the netherworld of Niffelheim; a mystical land that lies between the plains of Hel and Asgard. From the fog shrouded mountains and forests of this otherworldly domain, you must survive amongst its harsh regions and prove yourself victorious by slaying legendary beasts in order to find the severed pieces of a portal that can send you to your rightful place within Asgard.

The game plays across two fronts: one a survival title and the other a role-player. Presented in a 2D format, you explore a series of regions; each one housing a variety of interactions from collecting resources and mining to exploring dungeons, fighting legendary creatures and interacting with a number of characters, including a couple of friendly and helpful Rooks. Although your ultimate quest is to find all the pieces of the portal, you’re main aim is to simply stay alive. In order to achieve this, or at least give yourself the best chance of combating the elements, you must explore the regions around you, harvesting materials in order to build yourself a home, a variety of work stations and keep yourself from starving to a second death. 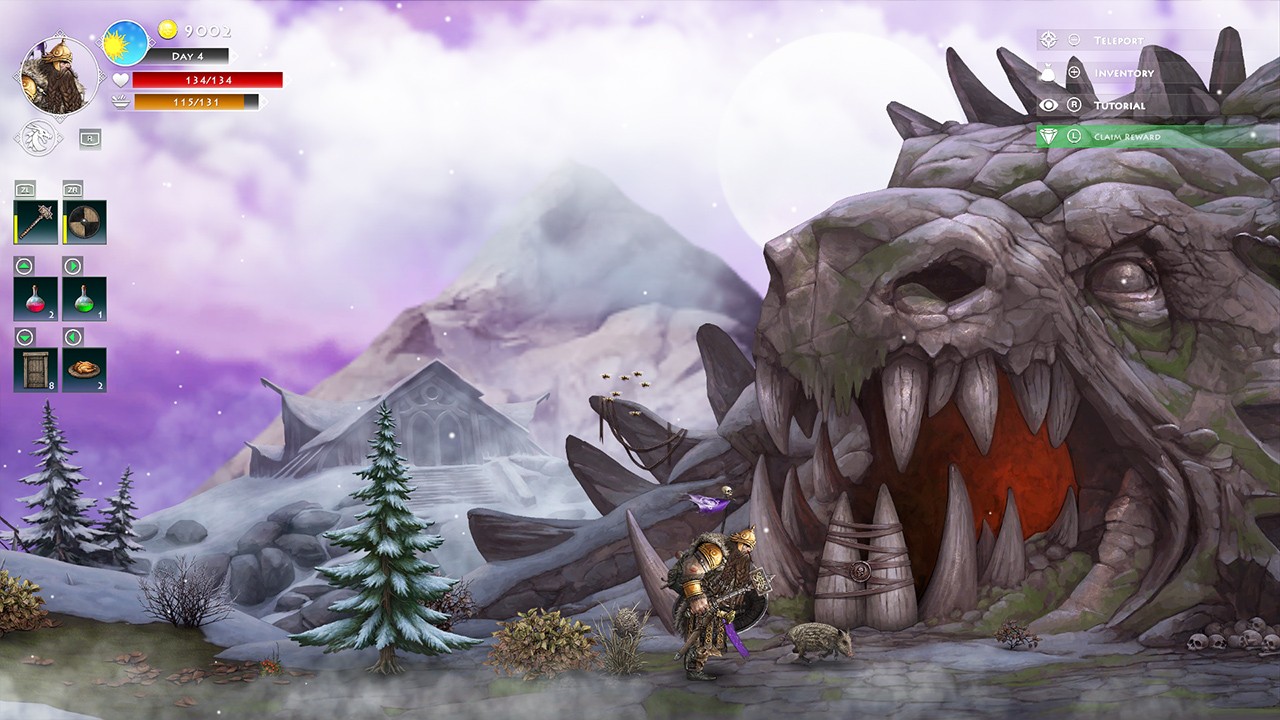 In many ways, Niffelheim contains a number of mechanics similar to other survival titles such as Minecraft and Terraria. Although vastly different in its presentations and appearance, you’re still tasked with collecting resources such as wood and rock for building and berries and meat for eating. As you begin to collect your resources, you can then expand on your home dwelling by building a series of modifications to advance your character further. You begin with a small cave in which to reside, but in time, you can develop its being into a huge fortress that houses a number of annexes and defences, as well as provide a place of shelter, warmth, food and equipment.

It’s in this aspect that the game works in a very satisfying gameplay loop, as the more you explore and the more resources you gather, the more the game opens up and the further you can explore its regions. It works on a constant, levelling up of your character through your actions. For instance, the more trees you chop, the higher your wood-chopper rating increases, meaning you require less effort in future resource management. The more animals you kill, the higher your hunter rating and so on and so forth. This works alongside the development of your home, as the higher your skill ratings and the more resources you collect, the more you can develop in order to build new materials such as replenishing your worn out axes, swords, shields and armour.

In order to collect the required items needed to survive, you must explore a vast number of regions and locations. However, the game also works on a energy resource system, meaning the more you do or the further you travel, the more energy your characters uses. This, in turn, is also another element of the game that needs to be catered for through feeding, resting and potion making to keep your strength optimised for your journeys and explorations. Again, your character levels also play a part here, as some regions or dungeons may not be fully explorable until you have reached a character level that allows you to advance. It’s a very clever system made up of a number of fronts, producing a level of gameplay that always rewards and pushes you forwards in your quest to reach Asgard. 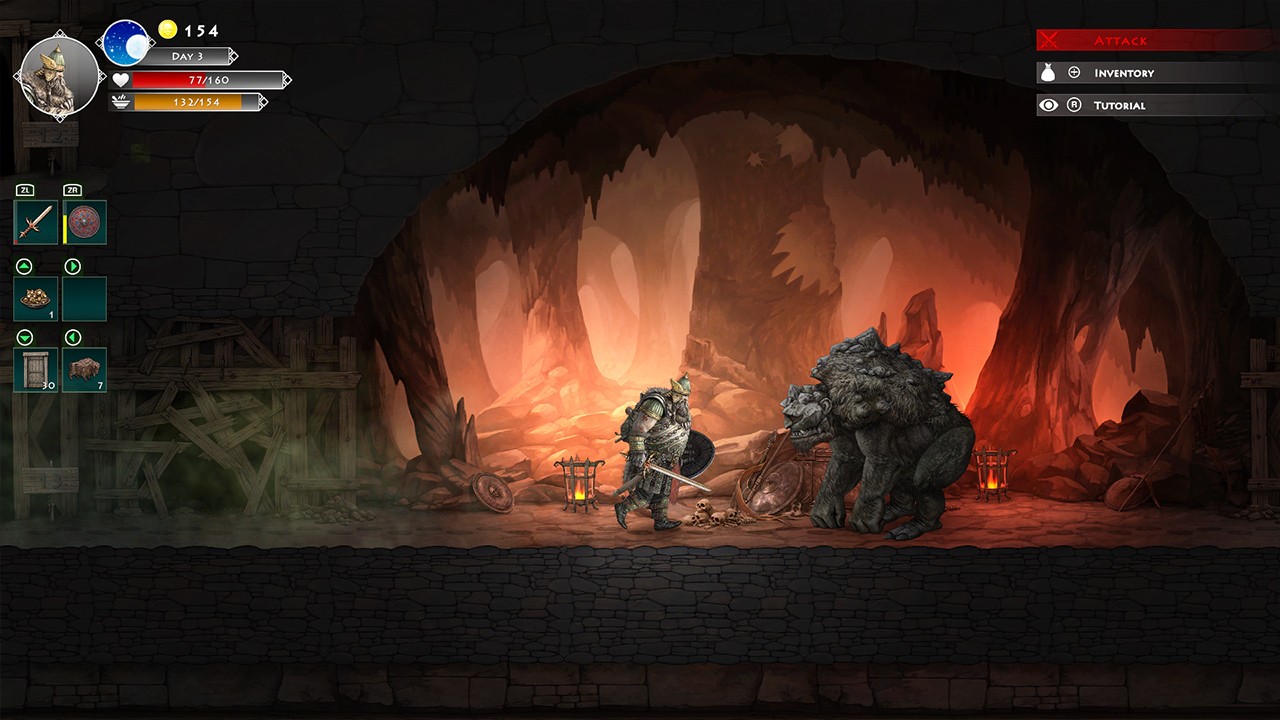 In order to build the portal to freedom, you must confront a number of enemies that guard the fragments. This brings an element of combat to the game as well, although it is arguably, the weakest part of the overall gameplay. As well as hunting the wildlife of the lands, undead creatures, tortured souls and mythical monsters also roam the land. Slaying such beasts builds up your character to a level where you can take on a series of boss-like creatures that guard the fragments you require. Some of these boss levels produce some exciting encounters, with some colossal enemies that need to be slain.

When you put together each of the individual elements the the game possesses, there’s a staggering number of components to its overall design; presenting a game that always offers something to do whenever you play, from random events to provide urgency, to quests, interactions and the overall development of your character. It isn’t a game that necessarily holds your hand either, giving you the freedom to explore and learn at the same time; giving this game a very satisfying level of progression. You need to explore and collect resources to develop, through development you grow stronger and through strength, you can take on the guardians of the portals you require. There’s so much to do, it’s simply staggering; offering a title that provides a good long-term investment. However, it’s also a game that runs through a pattern of repetition and a need for some grinding, making this a title that sits best as a casual affair.

Overall, Niffelheim offers a satisfying experience if your partial to the odd survival game. It holds a great deal of content and long-term playability, as well as a satisfying gameplay loop that can become quite addictive. It looks fantastic too, with some detailed and gorgeous environments in which to explore. However, over time, it’s also these elements that can become a bit repetitive; making this a perfect casual game to play in-between others. Despite its repetition, this is far from being a boring game and with its resource collecting and exploration, presents a game that holds similar values to titles such as Minecraft and Terraria. Its system of constant levelling and feeling the benefits of such is rewarding and although its combat is a little flat, the larger boss-encounters can provide some thrilling bouts. From a personal viewpoint though, this is a game that you’ll either love or hate, but at the same time, is also a game that definitely worth trying. If survival games are you forte, then I’d highly recommend this game. If you’re on the fence though, then maybe pick it up during the sale season, you never know, it might not be Asgard as you think. After all, survival titles aren’t my first choice of game, but Niffelheim was certainly a longboat that I enjoyed sailing in.

Niffelheim offers a satisfying experience if your partial to the odd survival game.