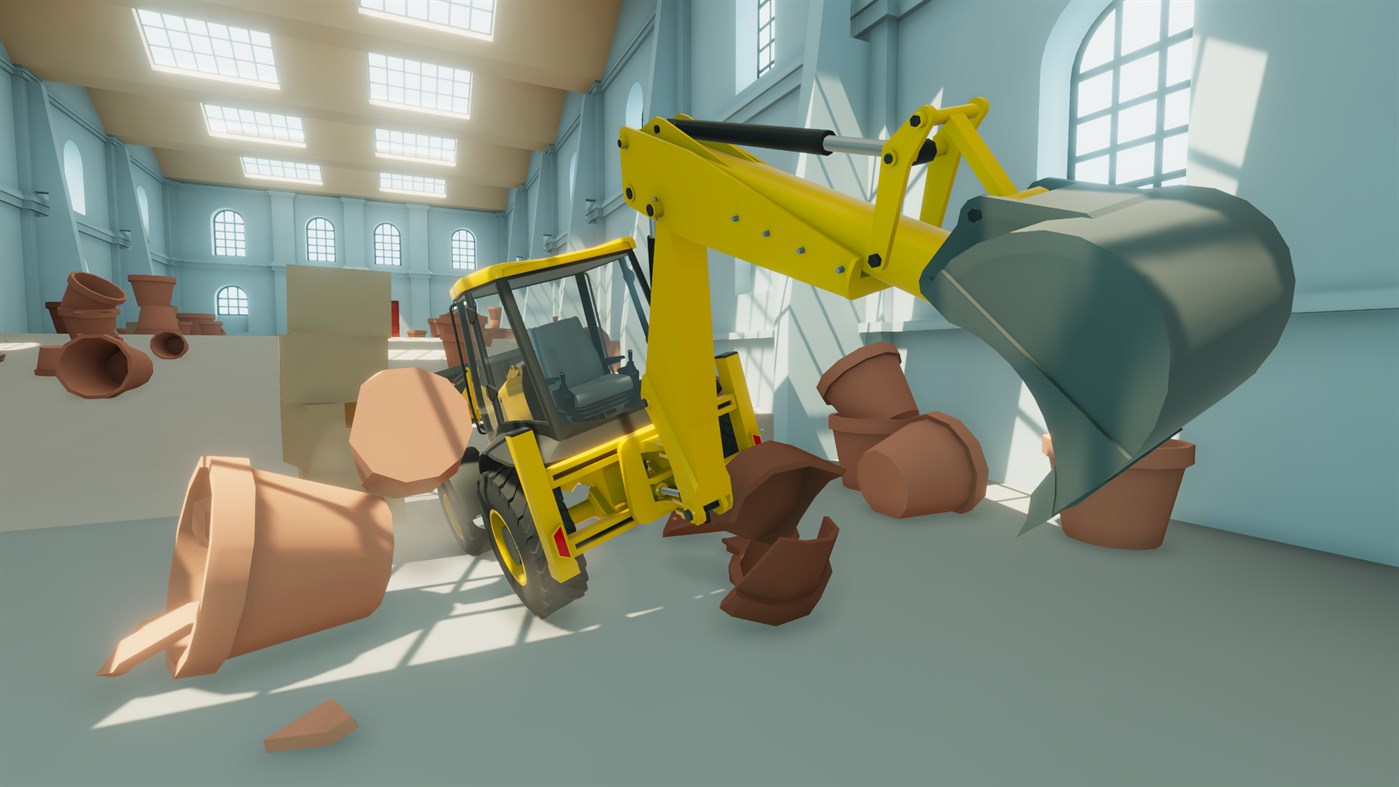 I think secretly (or not so in some cases), people love heavy machinery; tractors, trains, planes, diggers and so on. They are incredible vehicles that are fun to operate and perform important tasks around the globe. I think one thing that we can all agree on is that these gigantic pieces of equipment are designed for power, and they are not usually admired for their speed or nimble handling. Now, I’m not a fanatic about these feats of engineering genius, but when I see an unusual game using one at its core, then I’m instantly interested. BH Trials expects you to be an expert at digger operations, by controlling a backhoe using only its arms. You have no power, or brakes, and yet you must overcome; boxes, pits and blockages in several short but challenging stages.

Developed and published by Pico Sacro Games, this will be a test of your hand eye coordination, and your patience. The game premise is really straightforward, you must move your digger from point A to point B in the quickest time possible. You will be scored between 0 and 3 stars based on how well you do. Your vehicle has no ability to accelerate or brake, so you must use the arms on your digger to drag yourself along, or stop you from moving. In theory, it sounds easy, but in reality it’s brutally difficult. The arm has several hinges. These must all be controlled individually and if you forget what you are doing, you will send your digger the wrong way, into breakable items, or worse off a cliff.

Even though I found it punishingly tough to play, it was super addictive. Each of the challenges you face are just about achievable, so you will always have that carrot of success dangled just in front of your eyes. You are given the opportunity to face each stage on your own, or you can play this with 3 others in a cooperative mode. If you stick to solo, you will be given 3 different modes to try; trials, action and demolition. The trials mode makes up most of the gameplay and involves getting to the end goal ASAP. Once you finish the level, you can retry it to beat your time, and hope to improve your score. When you replay the level, a ghost of your previous attempt is shown, this gives you an instant understanding of if you will be quicker, or if you should restart your run. You will also find toys, these collectibles must be hit, and the level completed in order to capture them. I left them until I replayed each stage, as most of the time they were in awkward positions, and ruined your time. Action involves you hitting, or moving items as many times as possible in a time limit. Each time you complete the task your score will increase by one, a set score is required to bag the 3 stars, but you won’t know what this is until you finish the stage. Most of the time the target is ridiculously high, and my lack of skill made this mode almost impossible to obtain the maximum points. The final one demolition is self explanatory. Start the level, smash up all you can in the set time, and see how you have done. All of them were fun to try, but were very challenging to complete. 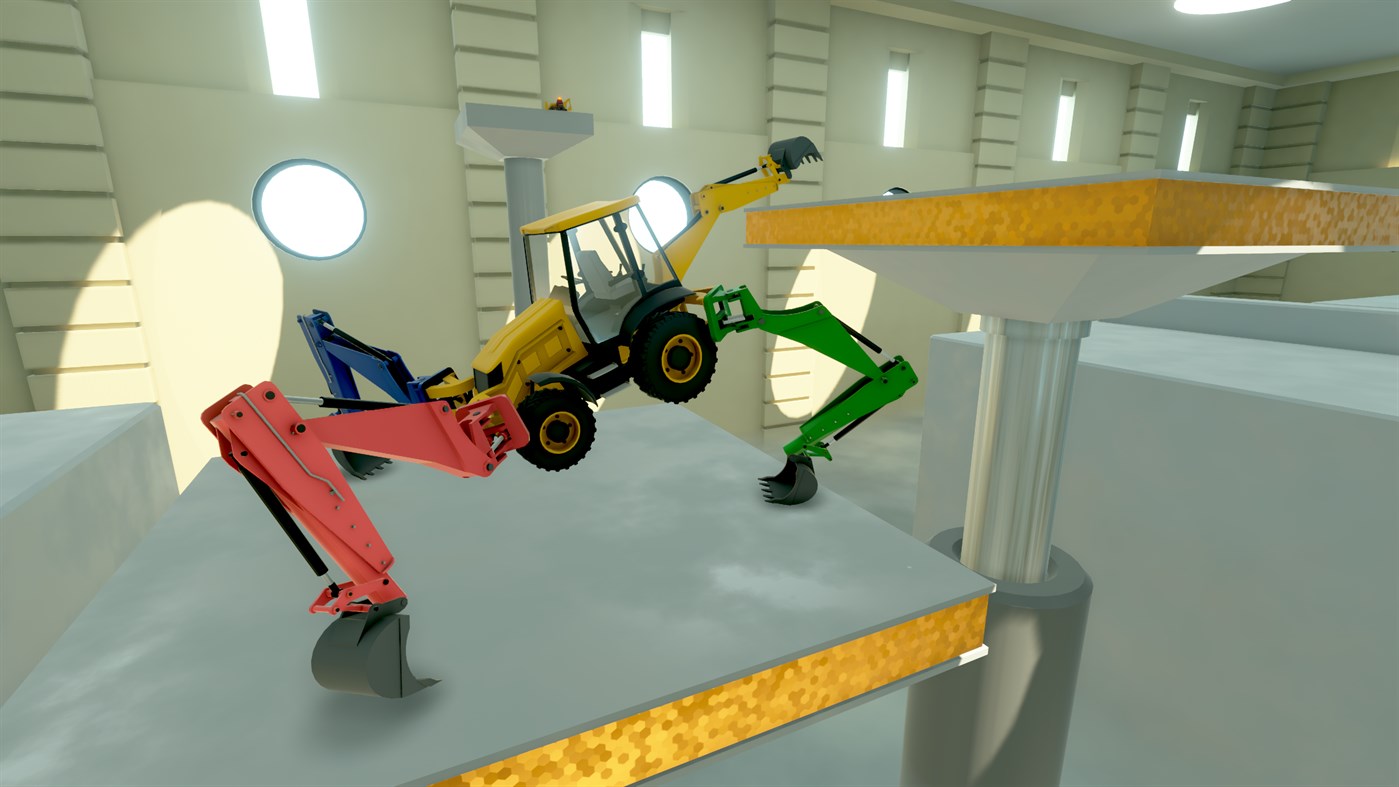 I loved the co-op mode, though it ended up in several arguments. Each player controls one arm on a spider like digger. You must work together to hit switches, destroy items, and move your monstrosity of a vehicle. I didn’t think it could get more complicated, but then Pico Sacro Games made it that much harder. Even with great communication, you’ll end up not knowing what each other is doing. Between the shouting and screaming, there was a lot of laughter as we moved the machine closer to the finish line, just to muck it up and fall to our death. Everyone was culpable, but no one wanted to accept the blame. If you and your friends can complete this part of the game, you are either experts in the construction industry, or extremely skilled.

BH Trials isn’t the most advanced games in the graphics department. It’s blocky in places, and some levels are rough to look at. The basic approach from the world map isn’t inspiring in the slightest, nor are the backgrounds for each of the stages. It’s dull, with bland colours, and no real variety. I could put up with all of this, if the movement and placement of the camera worked better. No matter how much you moved the image, you were always left with a blind spot. Sometimes your digger would move at a fair pace, and you would spin your view frantically to see what was coming up, only to crash and fail the stage. I believe a full free roam camera to observe each level before moving would have helped to ease this issue. As it is, you have to guess what you want to do, and planning only happens once you have made mistakes, and repeatedly failed each stage.

Whenever I think of heavy machinery, my mind instantly pictures big diesel engines and loud noises. This constant hum and rumble that you are familiar with is present throughout every level that you play. You also have the sound of the hydraulics pumping away as you move each part of the digger arm. These sound effects were realistic, and weren’t overbearing, the developers set the level and tone just right. However, what I found odd was the choice of music. The digger slowly moved around each stage for what can only be described as “lift” music. It neither suited the theme, nor the action that was playing out on the screen. 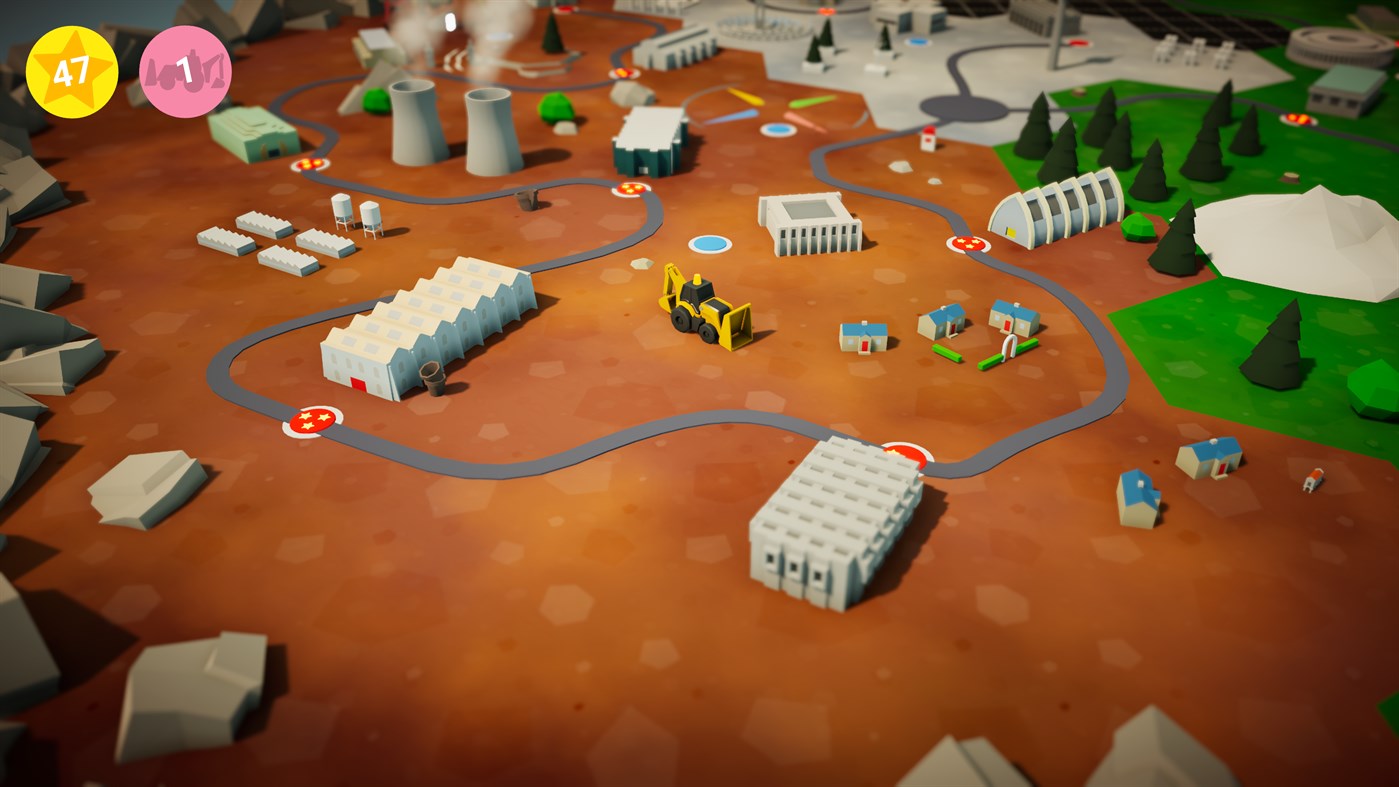 Though I was truly terrible at moving the arms, and the digger, and frankly the game, it was well made. The controls are clearly explained in a fun and quick tutorial at the very beginning. Each analogue stick controls a portion of the arm, and the triggers move the bucket. Some of you will grasp the concept quickly, and won’t struggle like I did, but I have a feeling there will be more like myself. If you master how to operate the digger, then I believe that you will have a fantastic time, but until you do, you will hope for a bit of luck, and inspiration each time that you play.

I’ve put in quite the shift to play this game, and I have spent a fair amount of time slowly moving around each level. So, do I want to return for more? There is something that draws you back to keep trying each stage. I’m not sure if it’s the difficulty, the ghost image to beat, or just wanting to get better at it, but I lost hours trying each level repeatedly. The selection of modes helped to stop it from being repetitive, and the cooperative mode was fantastic, so it would be fair to say there is a lot of replay value. You will also be given a rather challenging achievement list to unlock, and one that I believe will be almost impossible to achieve.

When a game comes up with the concept of digger Parkour, you think someone has gone a little mad in the design office, but oddly it works. With a mixture of skill, agility, and brute force, you will work your way through each of the stages you face. If you take on the co-op mode, be patient and forgiving as you will fall out with friends and family. Do I recommend that you try this tough title? Yes, but be prepared to be driven mad. Can you propel a digger using just its backhoe? Probably not, but where’s the fun if you don’t even try?

It’s time to grab your keys, and your digger. Head to the obstacle courses, and perform some Parkour. Who’s not heard of digger Parkour?