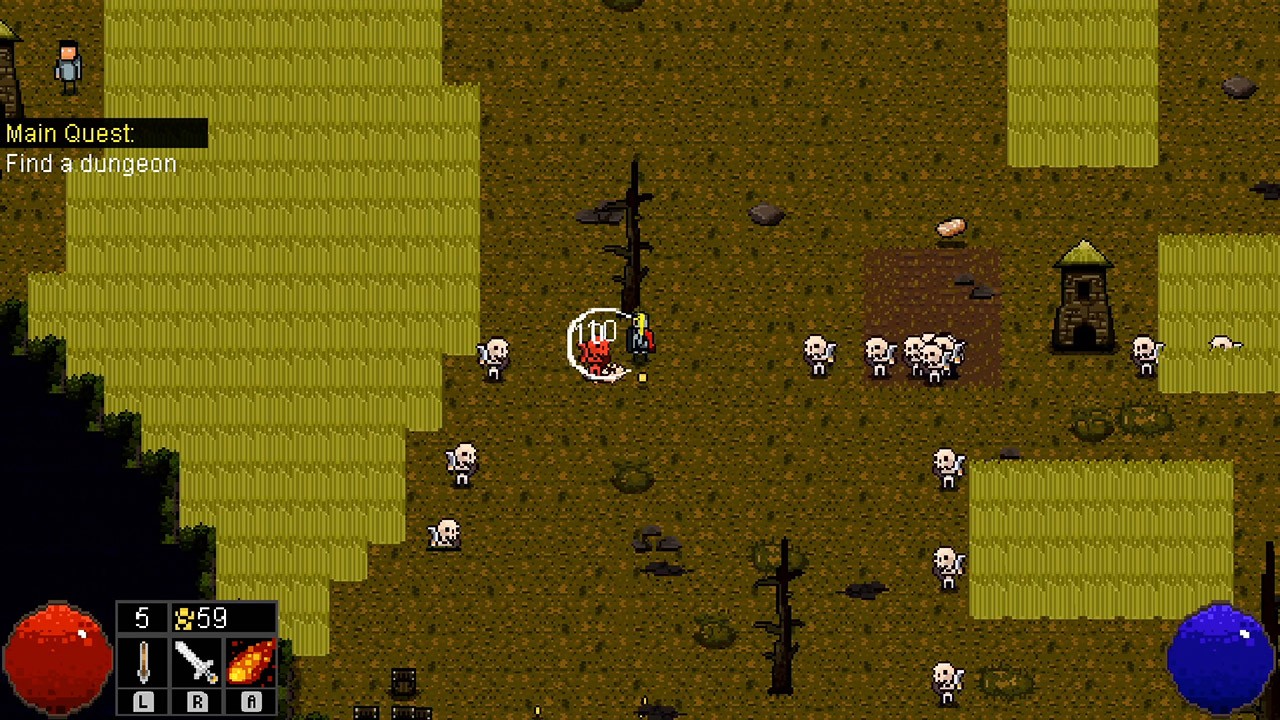 Diablo III is on the Switch. I don’t know if everyone knew that, because it was a fairly early title to launch on the Switch, and it got some acclaim at launch before disappearing under the riptide of game releases. It’s a fantastic game, it seriously is, and people who think it’s somehow still terrible or broken haven’t actually looked into the title since its poor launch many years ago. Additionally, we’ve got some fantastic Diablo-like games already on the Switch, such as Torchlight II, which has a metric ton of content and costs significantly less. It’s clear there’s a market for these sort of mouse-and-keyboard, turned twinstick, dungeon crawlers, where magic and sword combine for looting and serious mob obliteration. Perhaps Red Twice Potato, the creators of Diabolic, wanted to somehow tap into a section of the market that hadn’t yet been realized. Unfortunately, all we ended up with is yet another simple game that feels limited, repetitive and, ultimately, forgettable.

There’s not really a plot to speak of for Diabolic. You’re a nameless, faceless hero, and you’re moving forward to fight through several stages of different terrain on your quest to kill a big baddie, who is a massive dragon. Along the way, you have one primary quest per stage (usually “find the exit”) and you may or may not discover the secondary quest by talking to the one NPC that exists somewhere in the level. The secondary quest usually rewards you with gold or chests and it’s totally optional. The gold is nice, the chests have health and ammunition, and that’s really about all I can say. In most cases, there isn’t any particular setup or additional information that goes along with the primary quest. For several of the levels, the hero either gets an epiphany (I should find survivors!) or else is merely directed by a nameless mass of NPCS (you should find this artefact). In one strange case, neither occurs: the hero just knows he’s supposed to survive the ruins, and there isn’t any explanation. Not a problem, but it’s inconsistent with how the stages are poised in other instances. 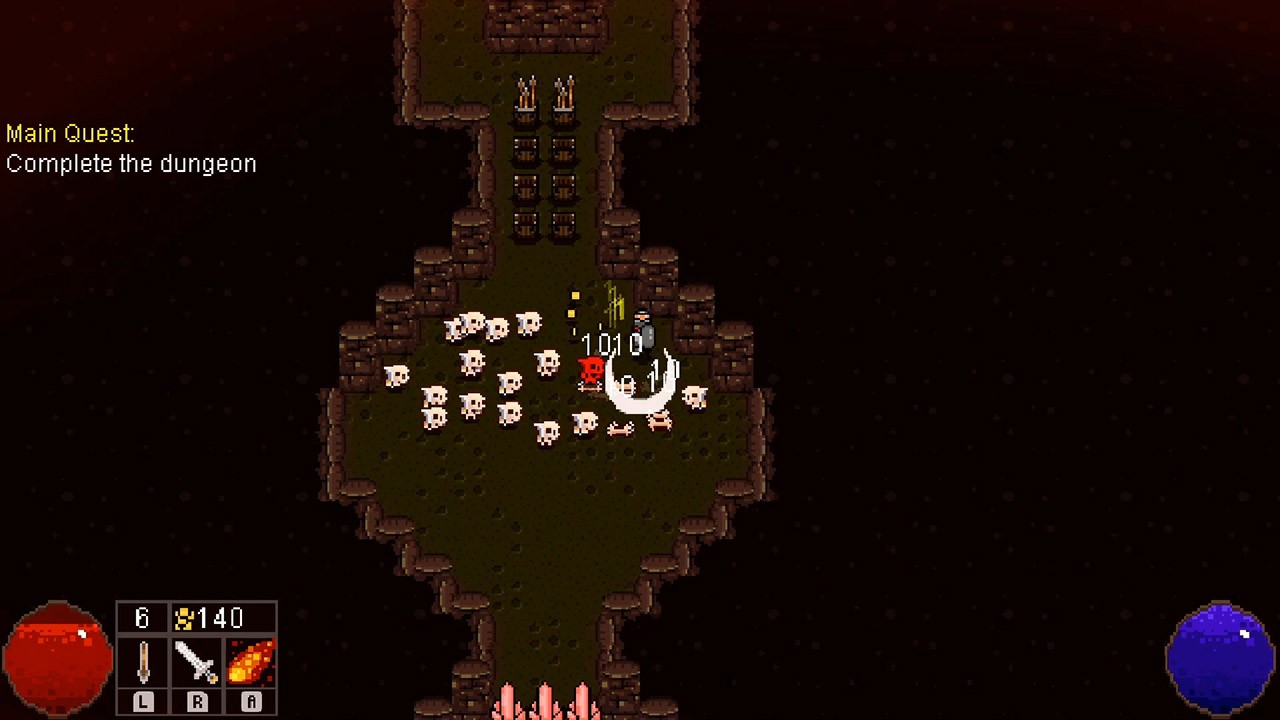 Diabolic doesn’t appear to have particularly lofty goals in executing entertainment and distraction, but there are some missteps from the very beginning. The problem is that the game is broken from the drop, and it never fully resolves. As the quest is always to “get to the exit,” you don’t even need to concern yourself with mobs for the first two full stages. I checked: you can just run from the top to the bottom (or bottom to top) and teleport to the next world without killing a single skeleton, who are the primary baddies to worry about in this game. Not having to ever face enemies feels like a massive oversight in a game where there isn’t much else to do, so, thankfully, you’re forced to confront them on some level once you reach the third stage thanks to the implementation of lockdown mechanics. There are walls that will pop up that can only be lowered if you destroy a target that exists somewhere else in the level: maybe it’s directly behind you, but it might literally be several screens away. During the Ruins scenario, the final exit is behind not one but two walls, and you need to destroy the target, return to the exit portal, trigger the second wall and then go back. This seems like a sort of attempt to inject longevity into a game not by creating a better or different challenge, but literally copy and pasting the content, like doubling down on a single argument without adding additional reasons.

Combat in Diabolic, which is the massive majority of the game, is a confusing ordeal that players may or may not be able to customize. You start off with a sword, a crossbow and a spell, though you will unlock two additional spells as you continue. The sword has decent radius damage and can, with some money invested, add a vampyric element to drain health from enemies.The crossbow does massive damage from the beginning (a starter of 20 compared to the 10 of both spell and sword), but you’re limited by ammunition. Arguably, there’s a LOT of ammo that can be found strewn across the world, though you’ll need to horde and conserve it if you plan to use it for any of the minibosses, and it’s impossible to properly plan for it for the final dragon boss fight. The spells are clearly the way to go, and their designation within the game makes them overpowerful while also being worthless. Your first spell, the fireball, has a good rapid strike, and even has strong repetition from your base incarnation. It gets better when you add more mana to your pool, increase your mana regen or up the damage. The damage modifier later affects the flame wave spell (which comes about in level 5) and the flame wave is literally the only way I found to survive The Ruins as it can hit a massive radius of enemies at a higher DPS than the sword. The free spell, which is your ticket for surviving the Labyrinth, is only useful for the Labyrinth. Seriously: the two levels afterwards are the Ruins (which are all ice based monsters and thus immune) and the final boss (who doesn’t care). It felt weird to introduce something new so late in the game and also have it be so limited. It almost felt like the game was unbalanced, and this was the best solution the developers came up with…and it’s borderline deus ex without being exciting or satisfying.

Once you’ve cleared a stage, Diabolic allows you to alter your “talents,” which is a fancy way of saying stats. Starting at fifty gold a point and increasing by 10 with each use, you can add points to everything: HP, mana reserves, damage for whatever, etc. You only increase a point at a time, though, so even a ton of gold being hoarded doesn’t do a lot in a shopping spree: the most I ever got at once was maybe 11 stat points added, which was, arguably, a big game changer. Amping my spell to 15 damage and speeding up my mana regen made me brutalize about better, but the real majesty is increasing your run speed. I ran in circles around the enemies, blasting them and allowing my mana to regen at its own leisure. In time, I realized there was zero purpose to winning by putting gold into the sword or the crossbow: it was all about becoming a battlemage. Without a bevy of gear to find or legendary monsters to slay, relying purely on the base stats to boost and make the game more exciting is a gambit that never really pays off. You get spellwork to 40 damage a hit, the DPS is always higher with fireballs versus swords or arrows, and you don’t need to have better health or stronger recharge orbs if you never take a hit. Eventually, you hit a level where you are stomping in no uncertain terms, but it’s such a gradual process that you don’t get to see the dynamic switch unless you horde gold for an unnecessarily long time. Death takes your obtained gold from the level and gives you only half, but that can seriously be enough for a point per minute or so when you reach level 8 or beyond, so you don’t need to feel concerned about losing achievements (which are nonexistent) for dying too much, and maxing out your character doesn’t really change anything. 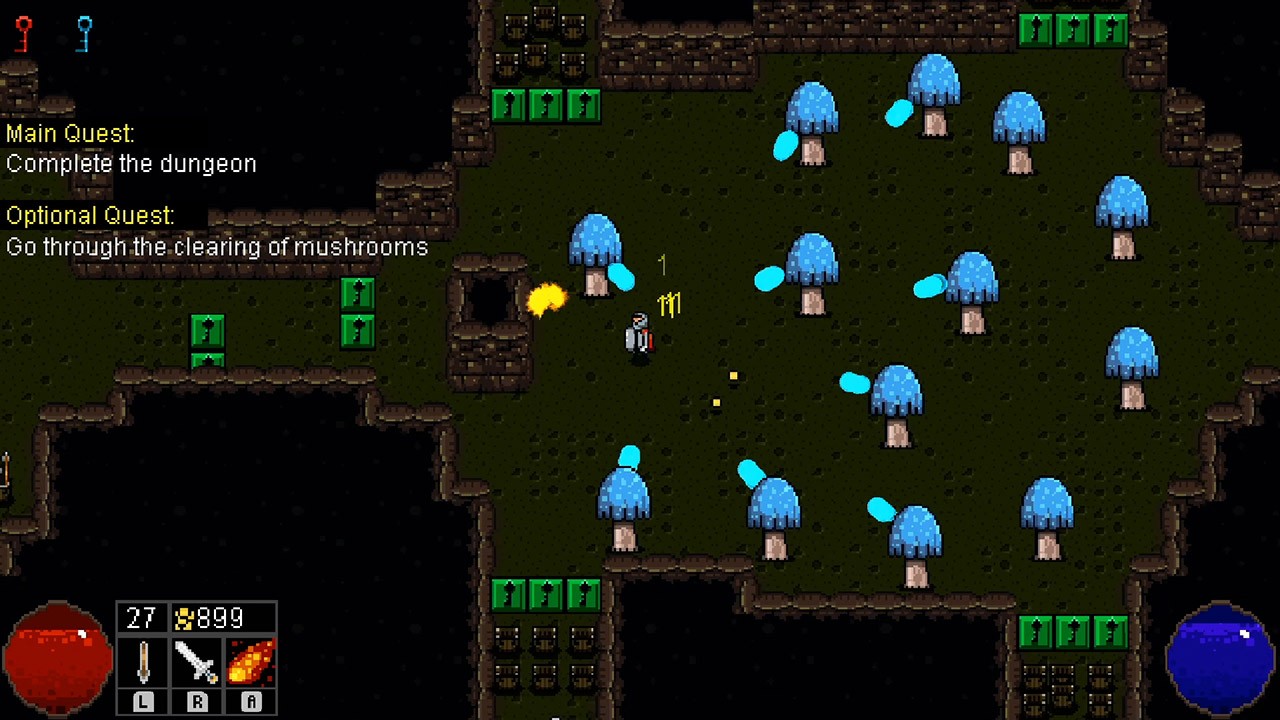 The biggest letdown of Diabolic is that it never goes anywhere. There’s already a lot against this game just in terms of base aesthetics: the character art is rough without being charming, there’s a variety of enemies that are just slightly bigger versions of the previous stage, and the music is boring, repetitious and very off kilter for the atmosphere of the game (a lot of sombre piano scoring). But there’s no thread of interest or originality that runs throughout the experience. Your character has no name, the land has no title, the quest has no purpose and the ending has no conclusion. When you finally slay the final dragon (which, to be fair, gave a feeling of the Big Satan fight in Binding of Isaac), you just see the game’s splash screen, the name of the development team (not even individual names) and then kicked back to the stage select menu. You put in this time and effort to play through and then are expected to be satisfied with the outcome of “I beat the boss.” Even old Nintendo games had a quick splash to show some kind of conclusion, but there’s nothing here. It borders on existential by having you enter into a broken “new game plus” mode, where you can just go back and select whichever stage you want to try again. The only way to really put replay value into this is to use the reset stats option and start from zero all over again, but, given what I’ve already said, why would you want that?

Diabolic is a grindfest without the rewards of great grinding or the massive god complex to keep you grinding away. The monsters are plain and simple, the pixel graphics are uninspiring, the skill tree barely forks and grows halfheartedly, and the end result has you wondering what happened to the hours that you put into this. I explored the landscape thoroughly, I went through every nook and cranny, and I am hard pressed to find a good reason to get this game other than it is, by all technical measurements, a functioning game. If you’re a completionist and just want something you know you can beat, by all means, but there are much, much better uses of your time.

The most diabolical thing about this game is tricking players into thinking they’ll get a parallel experience to another beloved franchise.