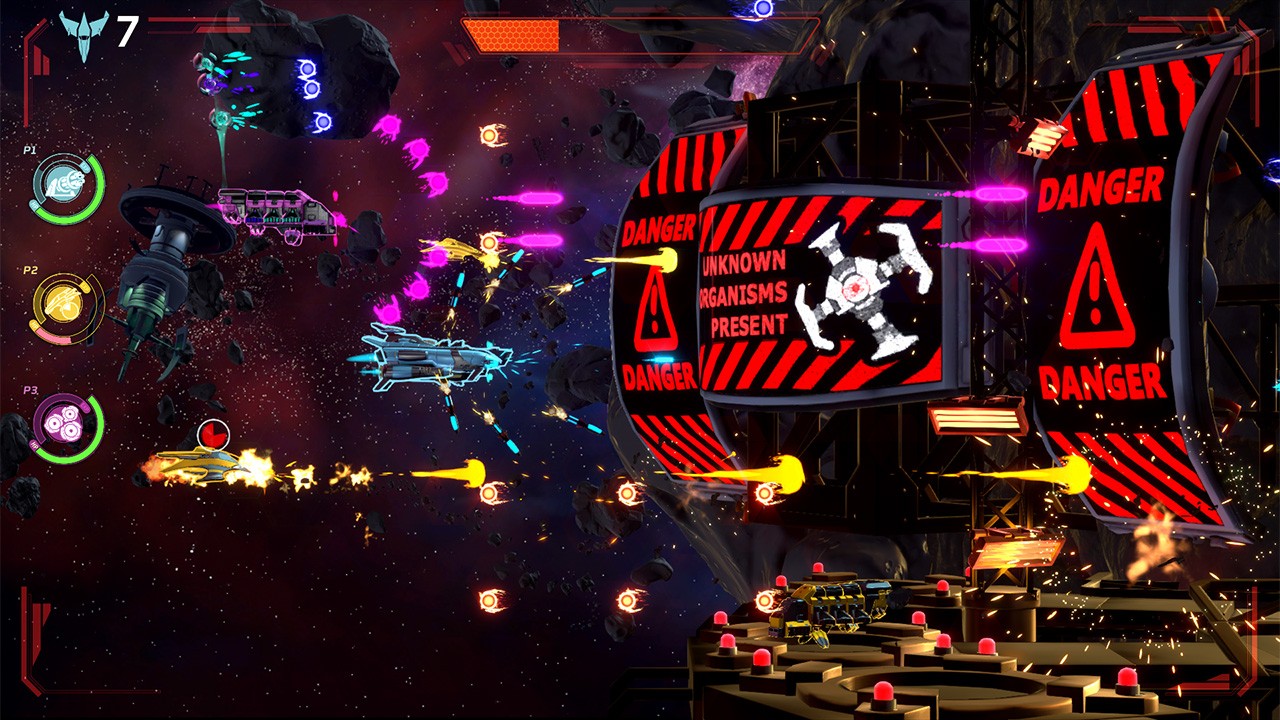 Shoot ’em ups are two-a-penny, especially on the Nintendo Switch. There are certainly some decent ones out there in the R-Type or Defender cast, but there’s more than a fair share of turkeys. Some introduce gimmicks; others fuse another genre in to make it stand out. Galacide implements both of those factors in that it feels a bit gimmicky, but interestingly, introduces a puzzle element while shooting things.

The puzzle approach here is a Match-3/4 model, linking up a series of colours in what is defined as a bitwall. Like a conventional shooter, Galacide is side-scrolling, but these bitwalls will stop your progress. Your job here is to collect the floating space junk to connect with the rest of the wall, match a colour then create a path for you to fly through. It’s a unique approach as one minute you’re shooting waves of enemies, the next you’re using your grey matter to work out how to continue your rampage. As you can expect, this stopping and starting does affect the pace of the game.

This mechanic is very messy on the surface, but in practice quite enjoyable. If you look at the screenshots, the layout is pretty cluttered, and when your ship is trapped between this wave of colours, it almost feels a bit claustrophobic, but it keeps you on your toes without getting anxious. Your ship is equipped with a tractor beam so that you can lure in the junk that you use against the bitwalls. This is crucial as there’s no way you’re getting past the wall, but finding an appropriate colour may prove tricky. That’s when another mechanic rears its head, and you can change the colour of a bit by placing it next to the colour you wish to change to then firing. It sounds easy, but it doesn’t always work out that way! 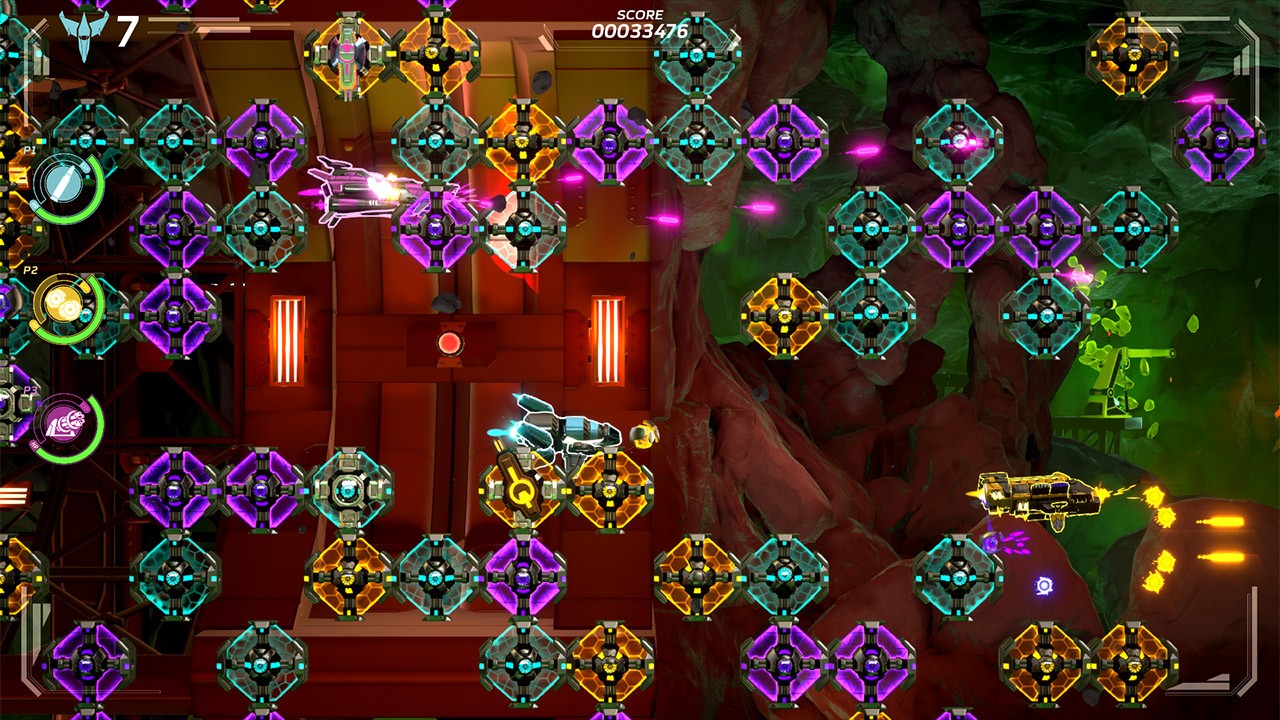 While you’re working out how to get past a section, you won’t get bombarded with enemy waves as it would be impossible to play, but between sections, there’s a fair share of rapid-fire button mashing. Due to the puzzle elements, however, Galacide isn’t a typical side-scrolling swarming with enemies, and sometimes it can feel quite bare in that respect. As a standalone, this would disappear in the multitude of other similar titles, but when coupled with the puzzle aspect, it deserves the attention. On paper, it sounds like a mobile game, and though your smartphone may be spluttering a bit, it’s doable, but Galacide is bigger than that and I preferred it on a larger screen anyway.

Yes, the game is innovative, and as a fan of these Match-3/4 type games, I welcomed the idea of fusing the two. Galacide is definitely a standout because of this, but there’s something that doesn’t quite resonate. Perhaps it’s the urgency? You have to solve the puzzles relatively quickly, but there’s an aspect about this that lacks the dynamic feeling of a side-scrolling shooter. Perhaps it’s been ingrained with these sort of titles since Defender, and Galacide is in that unfortunate position of being judged by the games before it. You have to appreciate that compromises have to be made to use both genres in the game, and that compromise means that Galacide lacks the flair, even though it is a good game. 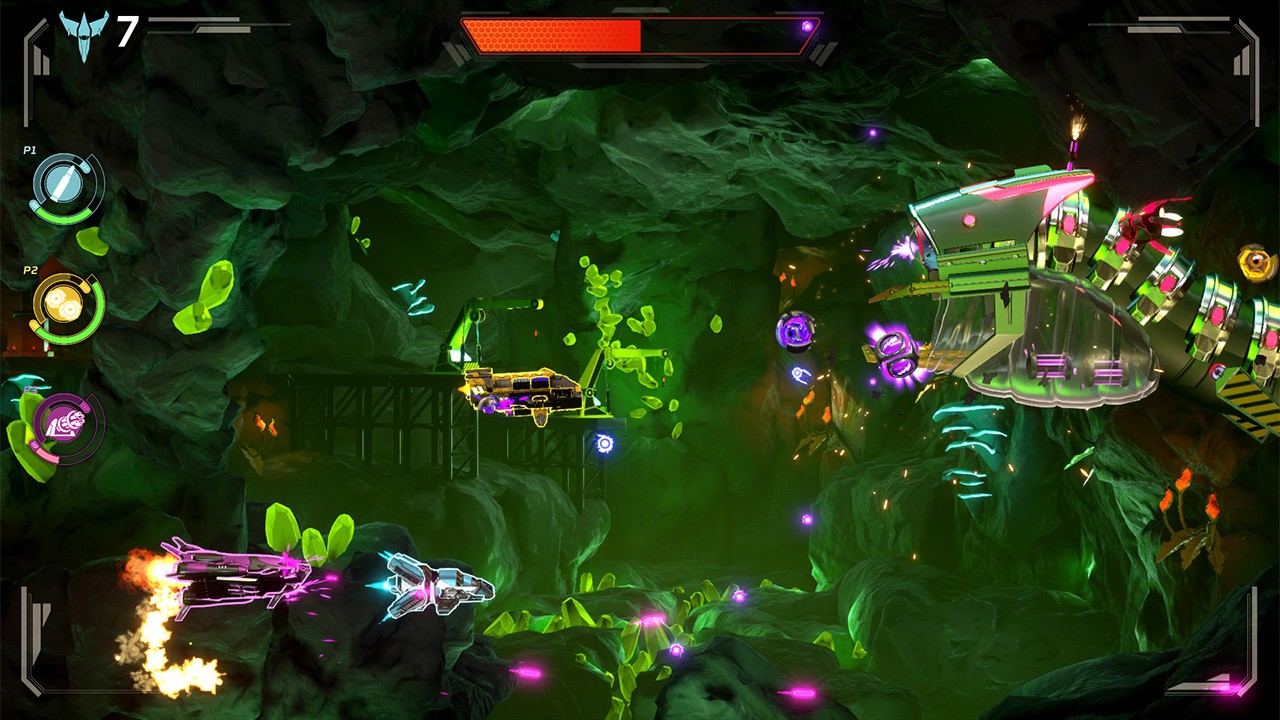 The visuals are nice, not something that you usually can pay attention to in a shoot ’em up, but due to the stopping and starting of bitwalls, you can admire the ship modelling (there are a number of them, each with perks). There aren’t that many levels in the game, but that’s typical of the genre, and it makes up for it with the difficulty levels and getting high-scores. You have the option of an endless mode, however, and that’s a great feature to have – even if you don’t opt to finish this on the hardest setting (not me!). You can rope in three other players for a co-op which, unfortunately, I was unable to do as no members of my household were interested as it looked ‘too complicated’. Despite the guilt trip, this was a solo experience, but a good one.

Who is this for? Perhaps for those Bejewelled fans who want something a little more unique as they’ve played everything their phone has to offer, or vice versa, shoot ’em up fans who want to delve into something that isn’t solely bullet hell. Galacide does the fusion of genres well, but as mentioned, there’s something about it that didn’t exactly ‘wow’ with me, but it’s a good game nevertheless, and from memory, I don’t think I’ve played anything quite like it. It’s not as if you stay stationary the whole time working out a Match-3/4 puzzle, equally, you aren’t button-bashing, avoiding projectiles the whole time either. It’s almost the best of both worlds.

If you want something different to a typical shoot ’em up or puzzle and just want to melt the two together for something that actually works, then Galacide should be on your list. It’s been out for a while on PC, and this port to the Switch is certainly welcome.