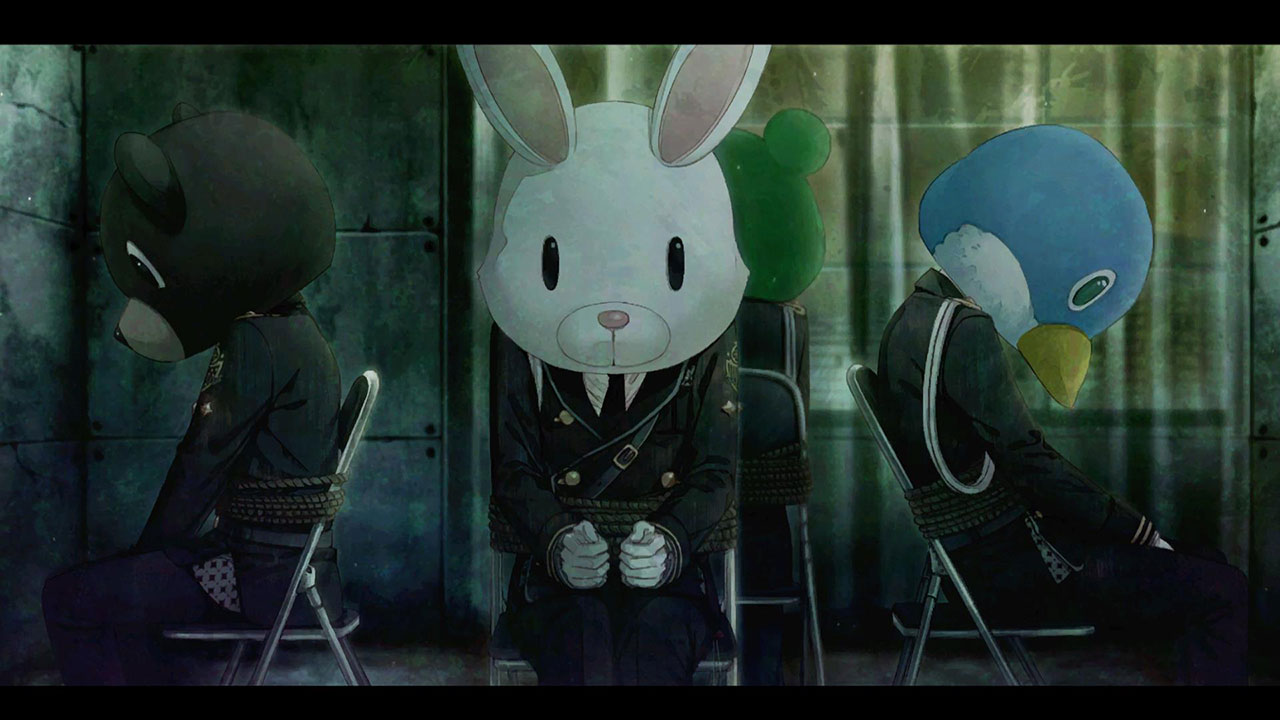 When I saw the name Aksys games, my mind immediately started trying to recall where I had heard them from. A quick recap and I discovered they had worked on bringing Little Dragon’s Cafe to the Switch back in 2018. The studio spends a lot of their time localising Japanese games in the west and they are involved in a hugely diverse range of titles. Collar X Malice is a visual novel (Otome) game developed by Idea Factory under their Otomate brand, which focuses on visual novels and similar titles. Originally released on the PS Vita, the game has been given a new lease of life on the Nintendo Switch, with an ‘ultimate’ edition also planned.

The basic premise is you are Ichika Hoshino, a dispatcher / officer in a police district in Shinjuku, Japan who attends calls with her partner as a result of recent developments, referred to as the X-Day events. During the process of carrying out her daily routine, she wakes up in an ornate chapel unable to move. A collar placed around her neck that will poison her unless she does as she’s told.

What unfolds is a storyline investigating the corruption within Japanese society as the villains, a terrorist group calling themselves Adonis, try to exact their own form of Justice in a way that Batman would not approve! Ichika is tasked with uncovering Adonis’ clues and mysteries hoping to unravel their motivation and putting a stop to their actions. Assisting her are a group of former and part-time detectives and investigators.

The game is hugely plot driven, combining a mystery-thriller with elements of romantic encounters as Ichika goes through her own story and uncovers the mysteries within Shinjuku. The characters often fit typical anime stereotypes, but on the whole they are likable and players quickly develop an attachment which helps to make the decision based gameplay even more difficult. 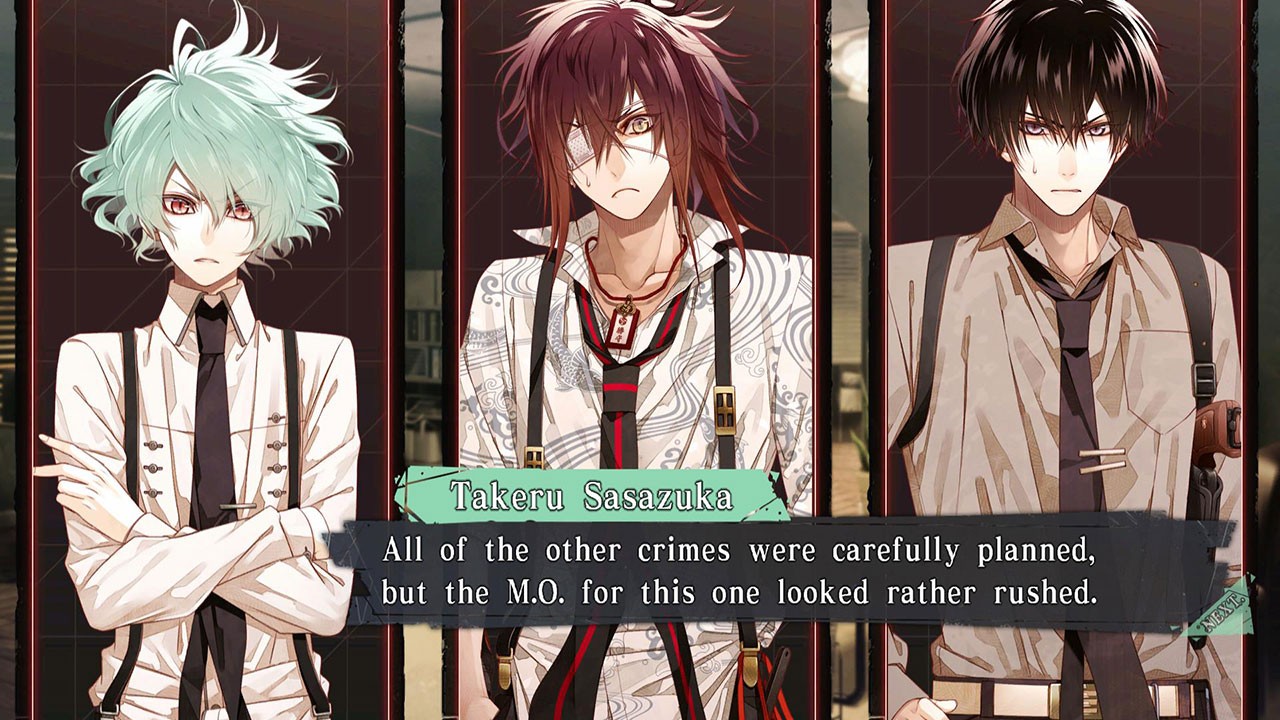 Most of the gameplay takes the form of making decisions that progress the story forward. Many of these decisions exclude parts of the story later on, which increases the replay value of the game as you are encouraged to uncover all the paths. Without spoiling the plot, the story is enjoyable and does a good job of drawing in its audience, but there is a strong possibility that, once completed, you will be tempted to search out the other elements of the story rather than play through it again.

The other side of the gameplay is the romance element. Far from a typical dating simulation game, Collar X Malice has a collection of romance options for Ichika. The romance element is not pushed as much as the main story, which is a diversion from traditional Otome games. Selecting the dialogue helps to progress these elements, altering stats as you progress through the game. There are plenty of hints in the text to help make your choices along the way and there are a wide variety of, albeit stereotypical, characters to interact with. Ichika also spends a considerable amount of time interacting with her friends, adding more depth to her character development than you sometimes see in similar titles.

The game is mostly text-based, with decisions being made on screen either with the use of the controls or, new to the switch, the touch screen. The gameplay is interspersed with quick time elements such as; ensuring Ichika fires her gun appropriately, and these help to keep the player engaged, as missing or failing these can cause a game over. There are also point and click based investigation elements which add an element rarely seen in visual novel games.

The game isn’t without its faults though, and one of the issues appears early on, with a very long and dragged out start to the game. It is clear that a lot of this is vital, however the issue could have been much more quickly addressed with the use of a longer introduction cut scene or, as you will see mentioned later, the use of a dubbed soundtrack rather than entirely text.

Visually the game has had a quality of life upgrade from the PS Vita, most notably with the inclusion of touch screen elements, but also in the upscaling of the art assets. The backgrounds used in the game are well designed and visually, the whole game is a stunning presentation of anime style, so much so that there are plans to give the game its own anime series based on the popularity of the game. The biggest complaint with the art style is in the variety of locations used, the developers clearly chose quality over quantity, which is a great thing and should be commended, but with a few more locations, or variations on the same location would have gone a long way in making this an invisible decision. 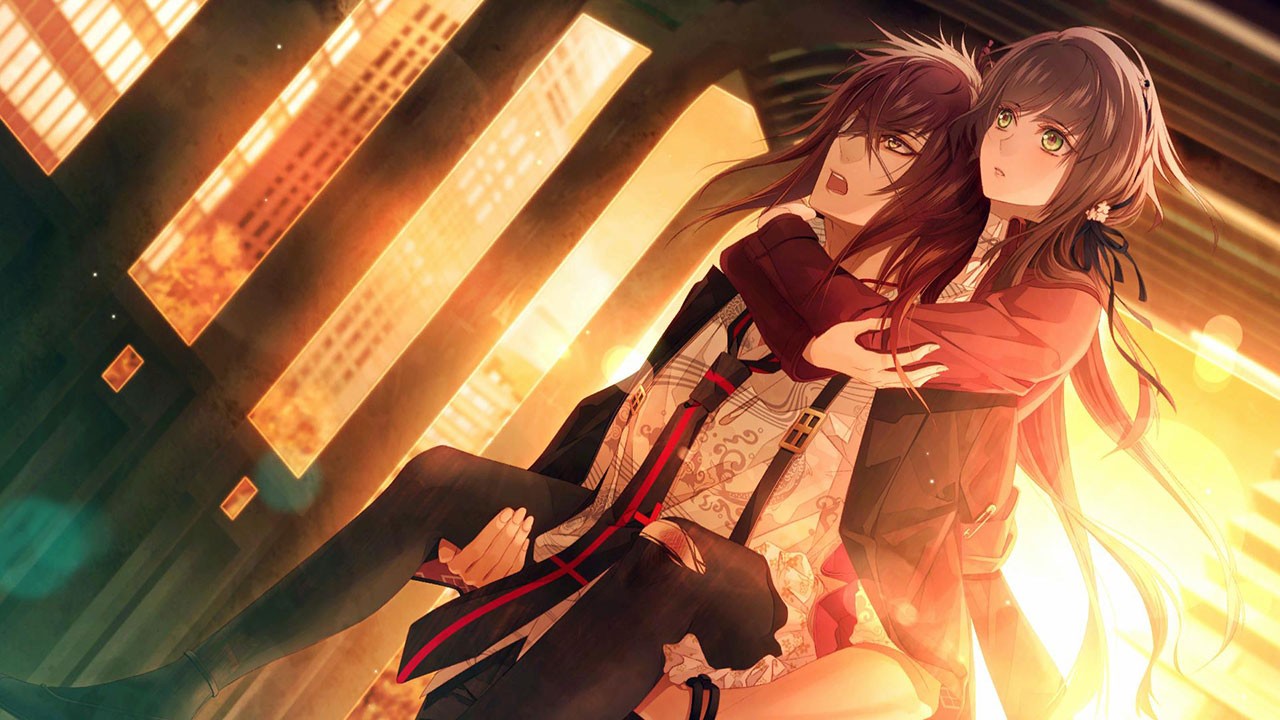 There is a wide variety of music in the games soundtrack, and the tracks used to match the location and story well, helping to add to the immersive experience during game play. The soundtrack can also be incredibly catchy at times, as shown by the title theme which is shown in the Nintendo switch trailers. The only complaint with the audio is that it’s disappointing that an English dub wasn’t included. While normally I am a fan of the original dialogue, often choosing the subtitled version of a movie, with the sheer volume of reading material in the game, a dub would have made certain parts of the game flow more smoothly at the very least.

The game is a really good title for Aksys to have picked up and it is clear how a title has garnered so much positive press to warrant a port to the current generation of consoles, let alone an anime adaptation and ultimate edition games. The story is captivating, with attempts to break up the visual novel tropes in ways that don’t just feel wedged in. The game flows, and it is rare that you feel taken out of the experience. A full play through can take around 20 hours, with even more time required to fully complete it, especially if being a purist and not using a walkthough.

The issues with the game, unfortunately, fall at Aksys’ feet. There are some issues with the localisation, with translated text glitches sometimes popping up and a couple of spelling and typographical errors noticed during playthrough. It would have been beneficial to have just had one last proofread of the transcript before giving the green-light I feel. It’s by no means a deal breaker, but can be a little jarring when you are mid-flow in your gameplay.

Overall, though, I really enjoyed Collar X Malice. It provided enough of what I expected from a visual novel game, with just enough experimentation to create a fun experience without feeling like a gimmick-fest. I enjoyed following through the story and found myself struggling to put the Switch down at times, definitely a benefit of having it on a portable console. This game is perfect for someone who commutes, and wants an alternative to the standard crime novel.

Collar X Malice is an enjoyable twist on the traditional otome genre of games. It combines elements of crime and thriller novel story telling with a relaxed approach to romancing characters, which themselves have more development behind them than you would normally expect.