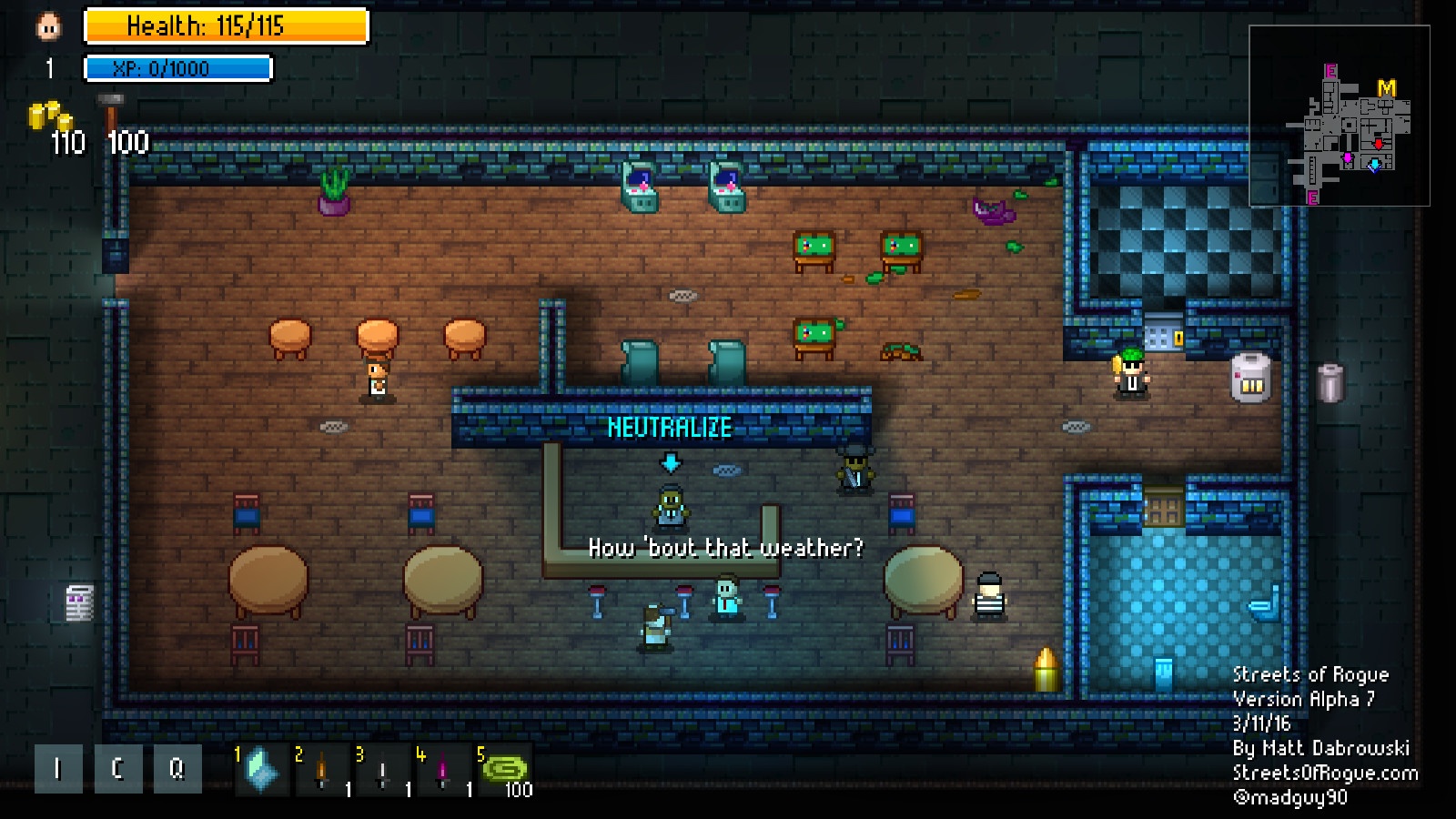 Streets of Rogue is being developed by Matt Dabrowski and it’s being published by tinyBuild which, from personal experience, is known for bringing unknown indie titles to the spotlight. Streets of Rogue is no exception to this as it seemed to come out of nowhere, at least it did so for me.

The game describes itself as a mixture of the rampage characteristic of the GTA series with the fast pace of games like Nuclear Throne, as well as some RPG mechanics from games such as Deus Ex. Initially I didn’t quite see how all these could be combined together in a cohesive and enjoyable experience but, as soon as I got through the first level, these three references were crystal clear. Streets of Rogue could also be described as a dungeon crawler but, while it shares a lot of similarities with that genre, when playing it, it feels like one of a kind so, for the sake of categorization, we’re just going to put it in the rogue-lite genre.

The game has some story to it, which is introduced through the tutorial, and it provides some context to what is really going on. The tutorial teaches you the basic mechanics in an extremely funny way, merging the teaching of the mechanics with the actual storytelling, and while the game main focus doesn’t appear to be its writing and dialogue, I must say that the very few of this that’s currently in the game has managed to give me a good laugh. 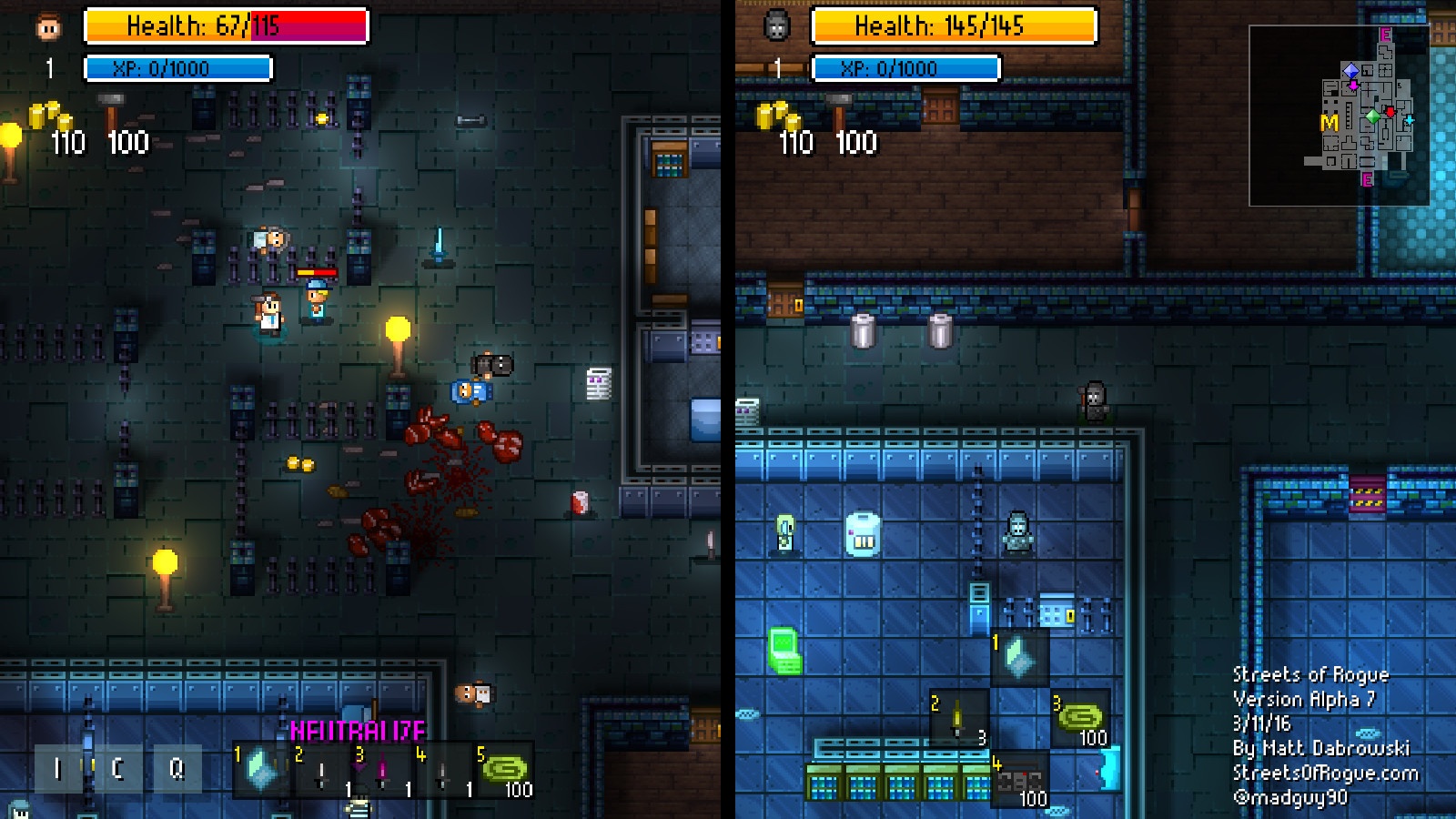 You’re part of the resistance who’s opposing the mayor of the city, which seemingly mislead the people into voting for him by making false promises. In that sense, you can begin your journey from the resistance’s homebase where you can start co-op games, replay the tutorial, activate level mutators, unlock rewards, purchase traits, customize your loadout for your next run, amongst other things. The game also features daily runs in which you have to play with a specific class and with a certain set of gameplay modifiers, which can give you a taste of what you have yet to unlock. While playing the game solo is definitely a lot of fun, in multiplayer it’s a whole lot more since things can get a lot more chaotic a lot faster and dead players can help by scouting around in their ghostly form.

With that said, the game already has plenty of variety that will pretty much ensure that two runs are not the same. Level mutators add a new layer of challenge by introducing things that you wouldn’t experience in a normal case scenario such as, a level being constantly bombarded, having a murderous robot trying to kill you, having everyone be hostile towards you, having the game run above the usual speed or even having a time limit per level. In the same sense, there are also currently 20 different classes in the game, each with its own unique traits and stats, such as the Gorilla who can’t speak to human characters because it doesn’t know how to speak english and can’t use projectile weapons because of its huge hands, the Hacker who can deactivate security systems, the Thief who can pickpocket or the Vampire which can suck the blood of other characters in order to rejuvenate himself. With that in mind, each class also has its own little description which adds a bit of character to each one of them. The city is divided into several levels and the further you progress the closer you get to other areas with each of them differing from each other. The levels themselves are procedurally generated and, in order to proceed to the next level, you have to complete a series of missions. These missions are usually one of three types, neutralizing a target, retrieving an item or rescuing someone and escorting them to the entrance of the level. 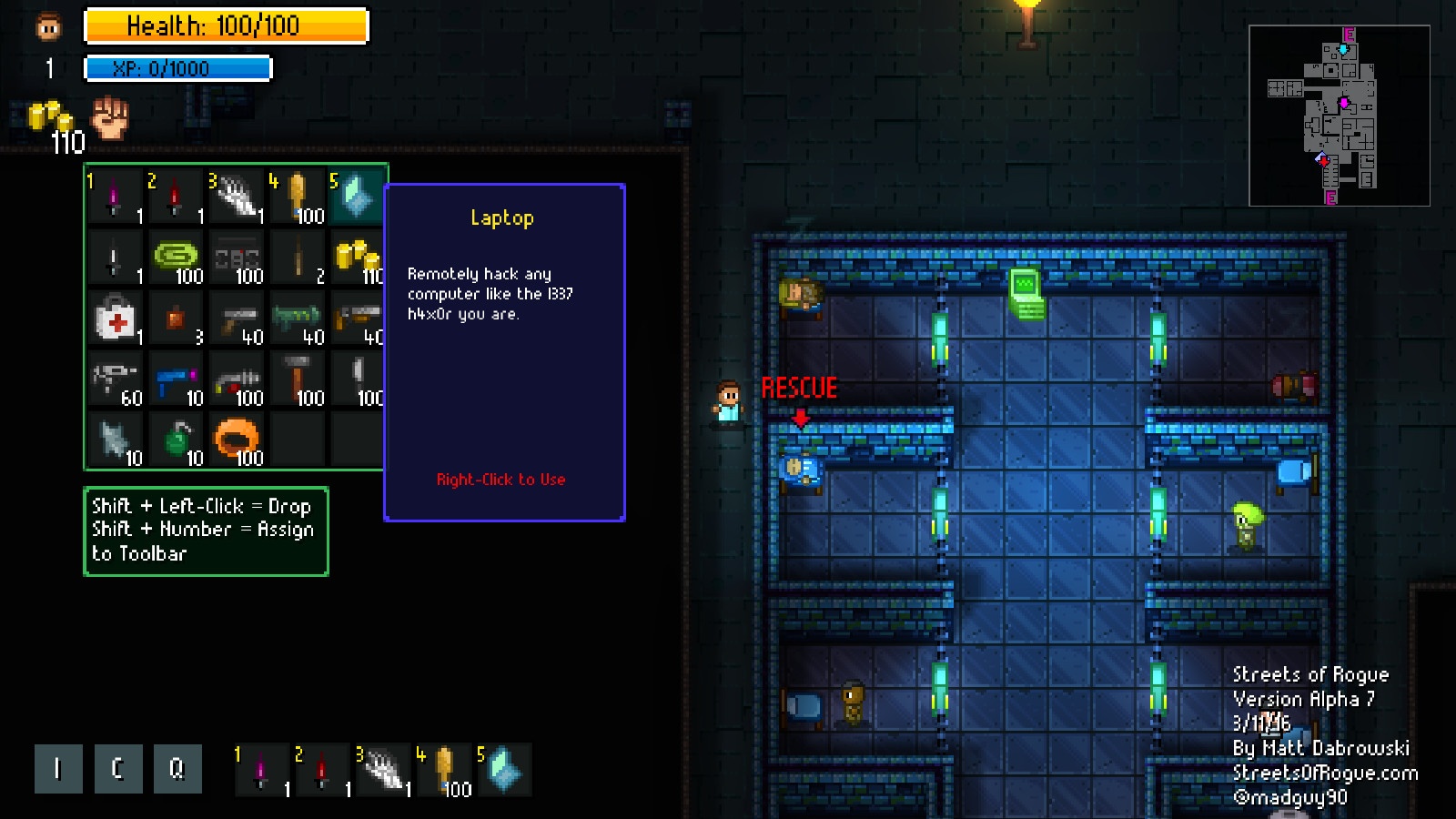 As far as gameplay goes the game is very intuitive to play with keyboard and mouse, and the only thing that you need to learn before heading right into it are the several shortcuts or keys for special actions but, even then, the game has rebindable keys so that’s not really an issue. The game is played from this sort of isometric top-down view which makes both the combat and exploration feel very natural but, with that said, while there’s quite a bit of variety to weapons and ways you can deal with enemies, the combat is very minimalistic and there’s really not much to it other than timing your hits properly..

Where the gameplay really shines is in the variety of situations that can occur when you’re trying to complete a mission or do something else, thanks to numerous factors such as, your character and the NPCs reactions towards you or simply the approach you adopted. One time you might find yourself trying to save someone from prison, and what better way to do so than to drop a boombox and have the guards dance around while you free the prisoner? In other cases, why not hack a computer and release gas inside a building, so you can then loot the safe once everyone’s dead? Better yet, why not simply knock on someone’s door and put a landmine next to the door so once they open it they blow up? Streets of Rogue rewards the player for experimenting and trying out the ridiculous, and the amount of items, characters, traits and modifiers that the game features, and it’ll hopefully feature many more, create this really fun and unique playground of mayhem.

One other thing which very much deserves praise and stands on its own is the soundtrack, especially the theme from the first floor which is very catchy and addicting. At first the music felt very samey but the more I played it the more it grew on me and, since each floor features a different track, I can’t wait to see if any new ones come out. Still in the audio department, I wouldn’t say that the sound effects deserve as much praise but things like the weapons and knocking on windows and doors certainly have an authentic feel to it. In terms of visuals, the pixel art used here looks very flashy, and it’s certainly very easy to distinguish things in the background which is very much a plus given how hectic things can become.

If you fancy streaming on Twitch, you’ll also be happy to know that the game also has Twitch chat integration. Beyond that, all I can add is that the game has been receiving fairly frequent updates and, as it stands right now, it is a lot of fun. If you’re looking for a game full of mindless fun, with tons of variety and which is pretty much guaranteed to give you a good laugh then I’d look no more. Streets of Rogue is extremely well done and worth getting at this point, and it’s very likely that it will only get better as it receives more updates.