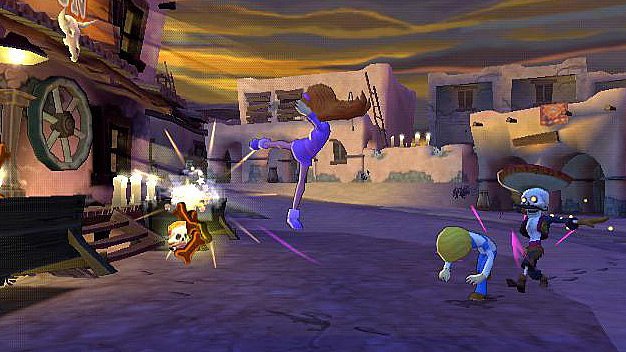 “Ah”, Scooby-Doo is one of the classic cartoons that bring back nostalgic memories of bad guys blaming those ‘meddling kids’ after being caught out by the Mystery Inc. gang. Scooby-Doo, Shaggy, Fred, Daphne and Velma have solved several mysteries over the years whether as a cartoon, as a film starring Sarah Michelle Gellar, or within previous games such as ‘Scooby-Doo! First Frights’. This time Scooby-Doo! and The Spooky Swamp is the medium so the gang better be ready for some scary shenanigans and mysterious goings-on all with the aid of a stylus or two.

In Scooby-Doo! and The Spooky Swamp you and the Mystery Inc. gang take part in an all-new adventure. Exhausted after another solved mystery, Scooby and Shaggy come across an inviting scent which leads them into a swamp behind the Mystery Inc. Clubhouse. They meet a mysterious girl who calls herself Lila who befriends them. Scooby and Shaggy agree to help Lila and have to head to El Muncho with the rest of the gang in the Mystery Machine, and thus starts a new set of mysteries that need to be solved! The top screen is where most of the action is as you manoeuvre your characters from one area to the next trying to uncover clues.

In the Wii version, there is a co-op mode, in this version of Scooby-Doo! and The Spooky Swamp the second character is computer aided. You can easily switch between the two characters whilst in the midst of a mission as each member of the gang has different skills that need to be utilised. For example, only Scooby is able to run up tree trunks whilst Shaggy can use his catapult to swing from one area to the next. There are fair few confrontations you’ll have to engage in and your characters are suitably kitted out. It’s better not to be in control of the character that has a far-reaching attack as your player can just run around the enemies whilst for instance, Shaggy can take them out with his catapult. Unfortunately, you can only switch between the characters that are on screen, you need to go to the menu to swap a playable character which takes a lot longer than it should due to the loading times involved. 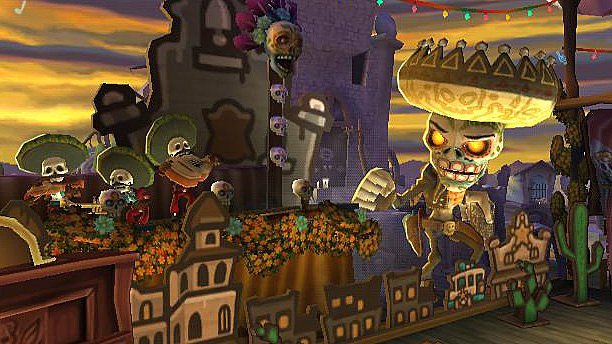 Graphically, Scooby-Doo! and The Spooky Swamp leaves a lot to be desired, with several areas failing to make the grade. Besides Scooby, the rest of the Mystery Inc. gang don’t quite resemble their cartoon counterparts, there’s just something not quite right about their appearance. The cut-scenes are of a really poor quality, it seems the Wii cut-scenes have been compressed so they can be shown on the Nintendo DS. It just looks really squashed down. The enemies are suitably varied, but whilst the areas you have to progress through do hold a certain Scooby-esque charm they lack a lot of detail. The Mystery Inc. gang voices are well represented whilst the inhabitants you come across are a likeable bunch. There’s a very limited use of the stylus with most of the action controlled by the buttons and D-Pad.

One annoying aspect of Scooby-Doo! and The Spooky Swamp is the ability to position yourself in such a way that when you re-appear (if you fall into a swamp, for example, your character re-appears in the position they were in prior to falling) it is entirely possible to keep falling to your detriment on an eternal loop until your courage meter runs out. To combat this you need to switch your characters so your chosen player is not the one falling off the screen. The camera can become frustrating at times as you can’t figure out how close you are to objects so you find yourself running into walls instead of doors or get hit by enemies when you think you’re safe.

Just like the cartoon series Scooby-Doo! and The Spooky Swamp requires you to identify the villain amongst the suspects. This adds some depth to the case solving as you have to link clues and evidence together. You can photograph items and suspects, collect small pieces of evidence, record suspect conversations and piece together paper scraps to reveal a clue. You may think this all sounds very interesting and inviting, to an extent that’s true, but the execution is a little on the shoddy side due to a lack of presentation. 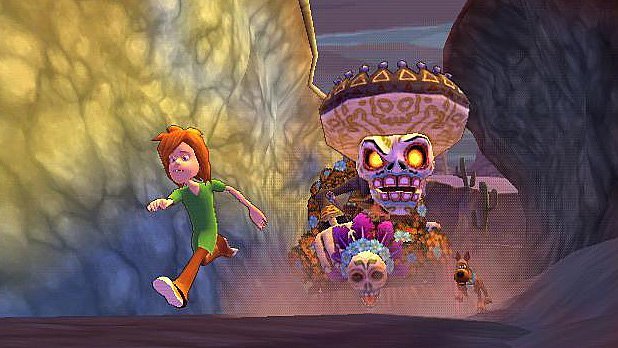 There are mini-games to get to grip with, such as the Dojo which requires you to defeat as many spiders as you can until you’re overcome. These break up the pace a little which is a good thing as you actually start enjoying Scooby-Doo! and The Spooky Swamp to an extent. The main game is mostly made up of repetitive battles and following leads. There are a variety of collectables littered throughout Scooby-Doo! and The Spooky Swamp such as ingredients for your sandwich, Scooby Snacks and Scooby letters. They add some extra longevity but don’t really add anything to your overall enjoyment.

For fans of Scooby-Doo and the rest of the Mystery Inc. gang, Scooby-Doo! and The Spooky Swamp is probably worth an hour or two of your time for purely nostalgic reasons. However, as a game in its own right Scooby-Doo! and The Spooky Swamp lacks a lot of the fun you would hope to expect from such a title. This lack of fun paired up with long load times, some dodgy graphics and a less than involving experience leaves you feeling whether those meddling kids actually had that much of an input. It’s a shame really considering the many adventures Scooby et al have been on; hopefully, the next Scooby game will be a little more enjoyable to play.