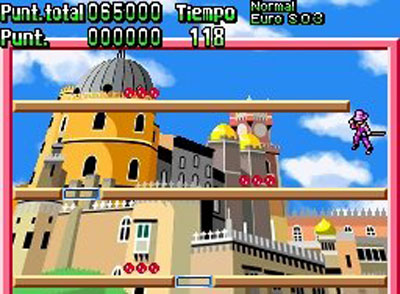 For the nostalgic among us Pang will bring back arcade memories of destroying balloons which would threaten several of the world’s cities and landmarks. Originally an arcade hit, Pang was transferred onto consoles such as the ZX Spectrum and Commodore 64, it even managed to make itself known on the SNES and Playstation. Now Pang: Magical Michael makes an appearance on the Nintendo DS hoping to replicate its predecessor’s addictive gameplay.

Magical Michael, an aspiring upcoming magician of sorts, enjoys his experiments, however this time things do not go as planned leading to some dire consequences. Unfortunately a devilish evil has been dispersed across the world resulting in several landmarks becoming victim to one of the worse kind of terrors….yes bouncing balloons. Now you have to travel the world and make up for your mistake by destroying these balloon abominations before it is too late. Luckily Magical Michael is not just a nickname because your weapons of choice are magical spells that are able to blow up these balloon baddies!

First off, you’ll notice that this is not a graphical marvel, as it attempts to make up for the lack of technical details by relying upon an age old addictiveness that previous incarnations have played upon. It’s a very simple concept born out of simpler times, to clear a stage you must destroy all the balloons before the timer runs out, otherwise you lose and have to replay the level. Dressed in what appears to be some kind of pimp suit and carrying a magical cane you have a choice of game modes that follow the same set of rules whether you choose the Panic mode, Tour mode or Challenge mode.

Your cane shoots spells vertically so you need to be under the balloons as they fall to destroy them. This lack of flexibility can be viewed in two ways, on one hand you can solely concentrate on manoeuvring yourself in line with the targets whilst appreciating the challenging element that shooting in one direction bring, on the other, this restriction makes Pang a very limiting and frustrating experience as you wish for a bit more cane dexterity. 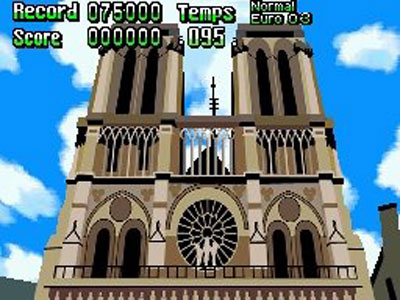 Just like other games of yesteryear there are power ups available that improve your arsenal. There are power-ups that help you progress such as the slow time power-ups, destroy multiple balloons power-ups and multiple shot power-ups to name but a few.

As mentioned earlier there is a Tour mode that is set over ten regions that contain four stages. You need to complete a region to open up another region; it’s not a completely linear process as often you can choose between two regions contemplating which one you should do first. Before each stage an introduction screen appears advising you of any new power-ups or additional level information. This is quite helpful and very clear in its content, meaning you won’t be surprised when you see something different contained within a stage. For example, reproductive blocks appear in the later stages of Pang, these are blocks than can be destroyed but reappear after a certain amount of time has elapsed.

The early stages are quite simple. Besides the fact that a hit from a bubble means an instant kill there isn’t too much to be wary of. As you progress the size of the bubbles increase as they contain bubbles inside them so when you hit one, it explodes and further bubbles appear from within the deceased bubble. The action will move from one screen to two screens so you need to plan ahead ensuring that you aware of the full picture. Otherwise you’ll think you’ve done well taking out all the bubbles on the lower screen only to find out that your tactics have made it impossible to deal with the bubbles on the upper screen.

Completing the Tour mode opens up Expert mode which adds more levels into the equation. There’s also a Challenge mode whereby you only have one life to play with when completing a region and an Arcade mode where you have to beat all the stages with a limited set of lives. Besides the standard Multiplayer mode there is also the Panic mode which is just an endless supply of bubbles where you attempt to pick up as many points as possible by pulling of combination bubble hits. 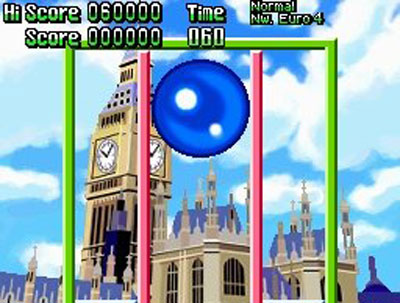 There are awards you receive depending on how you’ve done, for example destroying 1000 balloons or getting killed at the start of a stage. These novelty features help keep Pang interesting that little bit longer although they don’t have any noticeable effect on your own enjoyment as you win an award you weren’t previously aware of. There is world leader board where you can compare the best scores for each stage or you can just try to get a gold medal on each stage by beating the high score which it in itself helps make Pang more addictive.

So the longevity is there in abundance but when you have the function to play a game for this long it requires at least an average presentation to keep you interested. This is where Pang falls down as there really isn’t a lot going on in this department. The backgrounds on each stage change with each region but they are basic pictures of a city or a landmark. Magical Michael is a very simple looking sprite, whilst the power-ups are just small indistinguishable blocks for the most part. The sound effects will also grate after short period of time as there is no variety; Pang is more enjoyable with the volume turned off.

Pang: Magical Michael is undoubtedly an addictive game, however that addictiveness is apparent because of the simple premise that has worked over the last 20+ years. To bring Pang into the 21stcentury a lot more time and effort had to be put into the presentation side of things. So whilst it’s an enjoyable romp for an hour or two you’ll find Magical Michael as nothing out of the ordinary in the same way that you could bring back Pong or Space Invaders and try to rely solely on the mechanics. It’ll work for a short while but in todays market gamers expect at least above average graphics and some variety in the game play.

Pang is a fun game in its own right and if you have not managed to play it before then it is worth an hour of your time, but you’ll find yourself wanting something that little more engrossing. More of a three day old 21st balloon that an air balloon, it’s a classic formula which just misses out due to a lack of imagination.