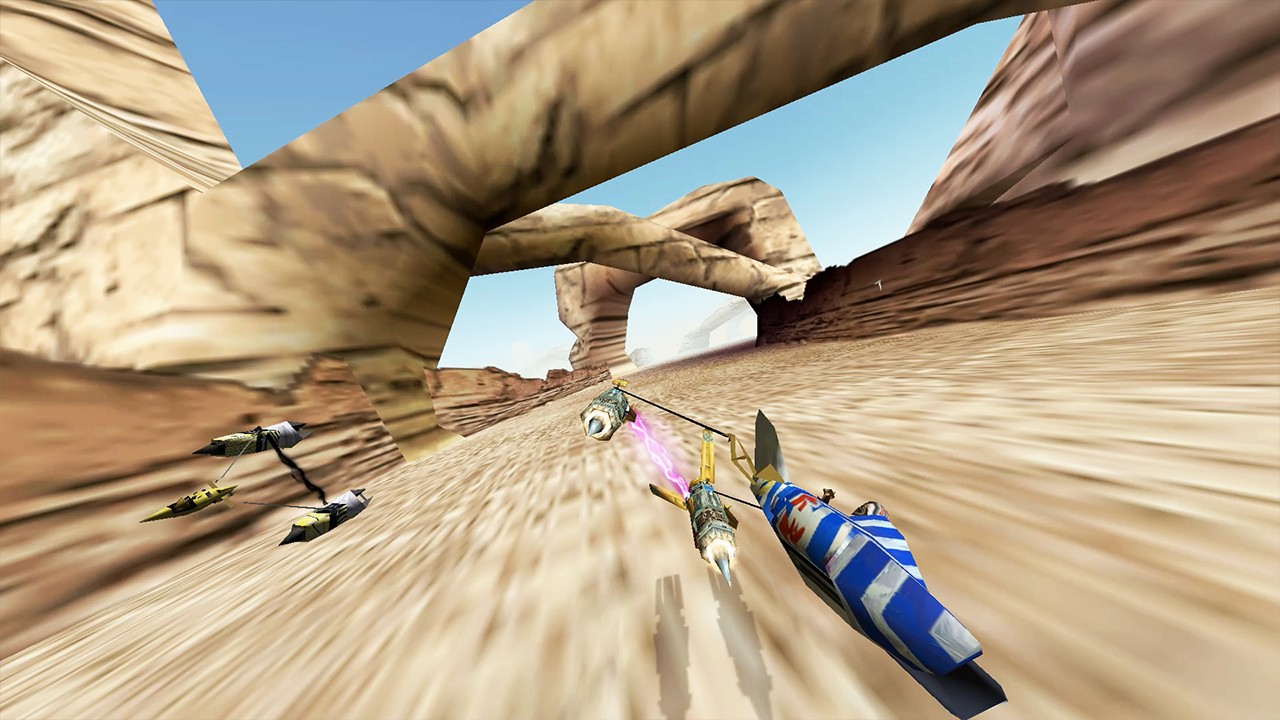 There’s a part of me that almost feels like this review is unnecessary. At this point the Internet has forgotten if the Star Wars prequels were actually any good or not. I’m joking, mostly, though I get the feeling that Aspyr Media through Lucasarts IPs will get plenty of sales even if I just write a small essay about how I feel that C-3PO is the real hero of the franchise and not the Jedis. The point is, the Nintendo Switch has now reached such a point in the market that nearly any title has the potential to do extremely well, and Star Wars Episode I has now existed for so long (It’s been more than twenty years, holy crap) that we can dig out a game that originally was on the Nintendo 64, smooth those rough edges and launch it with massive success. Strap on your helmets and be prepared to show them that Jake Lloyd didn’t sacrifice his acting career for nothing, it’s time to dive into Star Wars Episode I: Racer.

For those unaware, the entire premise of this game is inspired by a fairly interesting but somewhat offbeat plot point from Star Wars Episode I: The Phantom Menace. In the movie, young Anakin Skywalker is a podracer, who competes in these desert races in a homemade ship against other aliens in their own ships which, by comparison, look so much better than Anakins’. There’s this whole sequence of events, and it’s exciting to watch, and kind of fun, and alright it’s a frigging blast and it’s easy to see why they made a video game about it. There’s a tournament mode that you can play to unlock a whole bunch of courses and move from Tatooine to other planets in the Star Wars universe, and for extreme fans it’s exciting because most of the planets (such as Baroonda or Mon Gazza) don’t appear in the films, only some of the classic games and books. Also you don’t only have to race as ‘Annie’ sas you can take the role of one of several aliens, including Sebulba himself (who has Lewis MacLeod back to provide voice work) and Clegg Holdfast, who has one of the best names in the whole Star Wars universe. Each racer has their own ship with both its own advantages and disadvantages. 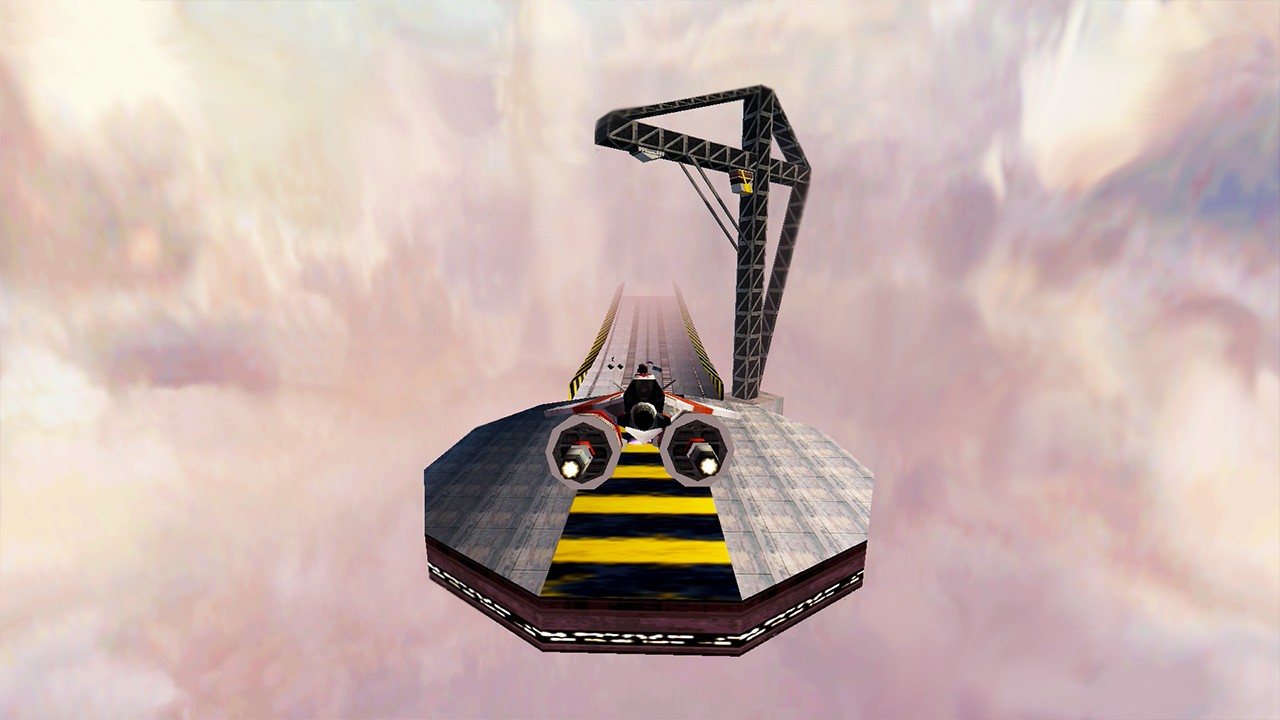 As you may have suspected, this racing game hinges entirely on being the fastest, quickest and most accurate racer that the Star Wars galaxy can provide, and you’d better hope that it’s you. Tournament mode, the most common mode that people will explore first, asks you to do three laps in different courses set across very different terrain ranging from the bleak deserts of Tatooine to the tight, metallic corridors of Ando Prime. You’ll only be able to progress if you win, and you’ll only be able to win if your ship is the absolute best, and stock never cuts it in racers like these. As you continue to win, you’ll get purses of truguts (the currency of the racers), and be able to increase your top speed, acceleration and turning, as well as up your coolant (overheating is a very real thing!) and air brakes, because you never know when you need to stop for a sharp turn or to let your opponent go slamming into something unmovable. The upgrades are expensive, but worthwhile; you’ll see even minor upgrades make major changes in gameplay from the very beginning.

So what sets Star Wars Episode I: Racer apart, besides the brand? First and foremost, Aspyr Media did a great job of upgrading this classic title while still retaining what made it enjoyable and memorable in the first place. The graphics have been beefed up a bit and some of the heavier polygons smoothed out, but there’s no full overhaul happening here. The core sprites, backgrounds and ship design have remained, simply touched up with a coat of resin to make it pop better, shine brighter, but still clearly be from that golden age of Goldeneye. In the same vein, Aspyr also decided to introduce motion controls, because racing games are fun like that. The motion controls are seriously a blast in single player mode: once you change up the view and put yourself in the driver’s seat, it’s easy to tilt your Switch all over the place as you try and careen around corners, making hairpin turns and praying that you aren’t dragging anything over sharp objects that might damage your ship, costing you plenty in repairs and possibly in precious seconds. Of course if you want to stick with traditional joystick maneuvering, that’s not a problem and it’s possible to toggle control modes between races; no need to commit to a single system for the entirety of your racing.

Besides the graphics, Star Wars Episode I: Racer now also has local multiplayer, a massive oversight in the original release that’s now been rectified. If you just want to race by yourself, go right ahead; no one is stopping you and there are countless hours worth of unlocks waiting for you to achieve. In fact, players who want to race against a friend had better be ready to invest time in unlocking the goods, because you cannot and will not have access to ships, racers or courses you haven’t seen in tournament mode. But once you’ve got that set, a fantastic world of two-player, simultaneous local racing is ready for you, and I hope that those details don’t muck up what you may have been fantasizing about. Yes, it’s only two players, and yes, it’s only local. Net play is not available, and you can’t cram four players onto the screen. I don’t know why, but my guess is that the high intensity, very fast moving game might look and feel like hell if split any more, and I’m just gonna take this one as a win. There’s no reason to complain; the game is already upgraded and on my Switch, I’ll take whatever caveats need to exist for me to outrun my daughter as she crashes straight into the wall on Scrapper’s Run. Good times! 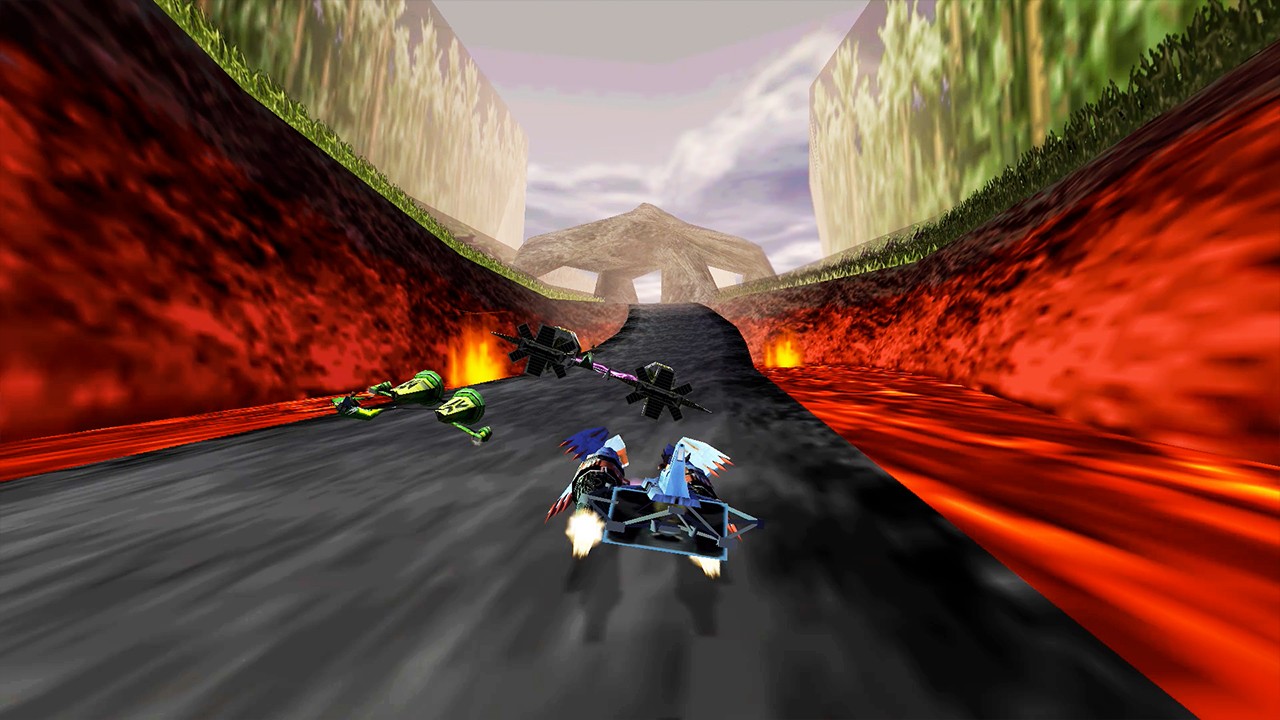 From a technical standpoint Star Wars Episode I: Racer is a fast and fun game that doesn’t rely too heavily on physics and precision, but still carries enough gravity to make it a calculated and strategic racer. You will suffer damage over time so planning, upgrading and repairing your ships as you go are key to longevity within the tournament. You can swap racers between races, but there’s a need to invest heavily in whomever your “go-to” racer will be (and I do recommend Anakin due to his balanced nature). The worlds are constantly shifting, full of both straightforward race tracks (Mon Gazza Speedway is over in a hot second) and others that are more…complex (I hate Howler Gorge). Yet, throughout it all, there’s a consistent tightness that plays incredibly well, especially given the age of the game. You have to react and move constantly within a limited window of time, and memorization of drastic moments on the course are essential. You fall into a super sort of concentration, one that affords very little perchance for error without total failure, and you can and will get frustrated by moments of unfair obstacles. On top of that, whole experience is backed with a recycled score from the movie, and any game where John Williams is the soundtrack is a frigging win in my book. Plus, it still retains the old lore of Star Wars, which was fanciful and exciting, and I love to dive back into it.

Maybe longtime Star Wars fans are the intended customer, and they should be: they’ve proven to vote with their wallets on what they do and don’t like. But Star Wars Episode I: Racer is still a fantastic, fanciful approach to a racing game by its own right, and could and should be experimented with by anyone who enjoys speed and vehicle upgrades. If you also happen to be a fan of Duel of the Fates, so much the better.

My, my, this here Anakin guy. Seriously, it’s such a joy to be back in podracing, and this finely tuned and touched up version is north its weight in womp rats.