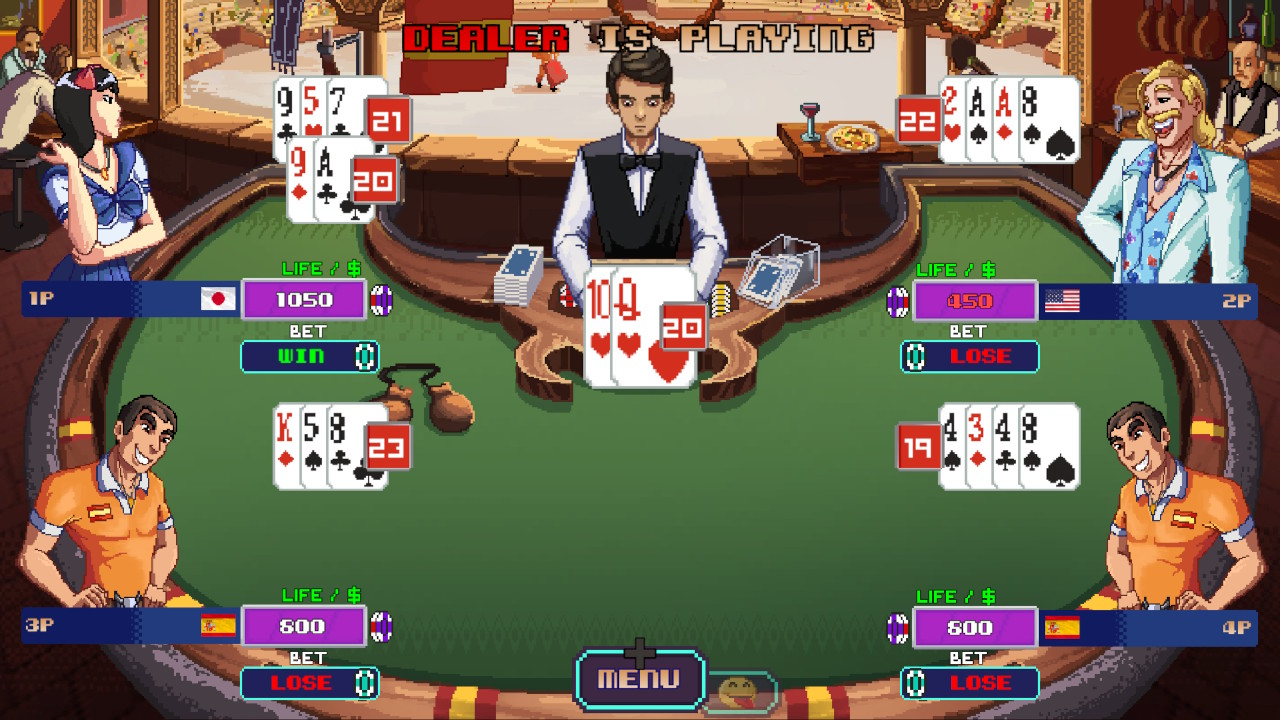 Ah, the classic art of gambling card games. Is there anything more beautiful than people losing tons and tons of money in an act that they perceive as skill based but, really, just comes down to luck? Sure, it’s got a bit more “strategy” than slot machines, but you can’t tell me a dude that pulls four aces or a Royal Flush did that because of years of careful cardistry. The best you can say is that a lot of great card players are damn intelligent with statistics and can measure risk and reward on the fly in a way that I can’t even begin to imagine. Additionally, Blackjack, one of the best and simplest card games out there, does have a way to generate real strategy (card counting) but doing so in a casino will result in disqualification (beatings). So I guess the only solution…is to take Blackjack on a world tour and defeat foes across the globe!

Super Blackjack Battle II Turbo – The Card Warriors is probably my favorite hyperbolization of a mundane sport that I’ve ever seen. The concept is simple, and don’t let anyone tell you differently: win by getting 21. This Blackjack game also utilizes the old “outrun the bear” scenario: you don’t have to be the best, you just have to be better than the person you’re playing against. The game consists of three modes: World Tour, Simply Blackjack and Party Mode. Each has its own charm, but there isn’t anything beyond Blackjack, so don’t fool yourself based on the title. Even if you fall in love with the aesthetic and the design, if you don’t like playing fast hands of cards then you’re going to get bored very quickly.

World Tour is the crown jewel of the game, having the most amount of gameplay combined with the best aspects of what the game is homaging. You pick one pixelated player and set off on a global conquest of Blackjack tables, facing off against great gamblers in each of their home countries. The character selection is based purely off of your fancy: there aren’t any hidden moves or elemental weaknesses, just your ability to play Blackjack. World Tour works on a ten round, sudden death approach, where players can bet a certain amount each hand to try to increase their winnings. The winnings are, of course, arbitrary: no matter how much you walk away with after a battle, you go into the next one with the same standard 1000$ so that the game doesn’t become wildly imbalanced. If you manage to get through all of the opponents, there’s a chance to face off against the secret underboss who organized this entire competition, and then you’re able to walk away from the game a true champion. Which, depending on your approach to the game, can be done in about 30 minutes or less. 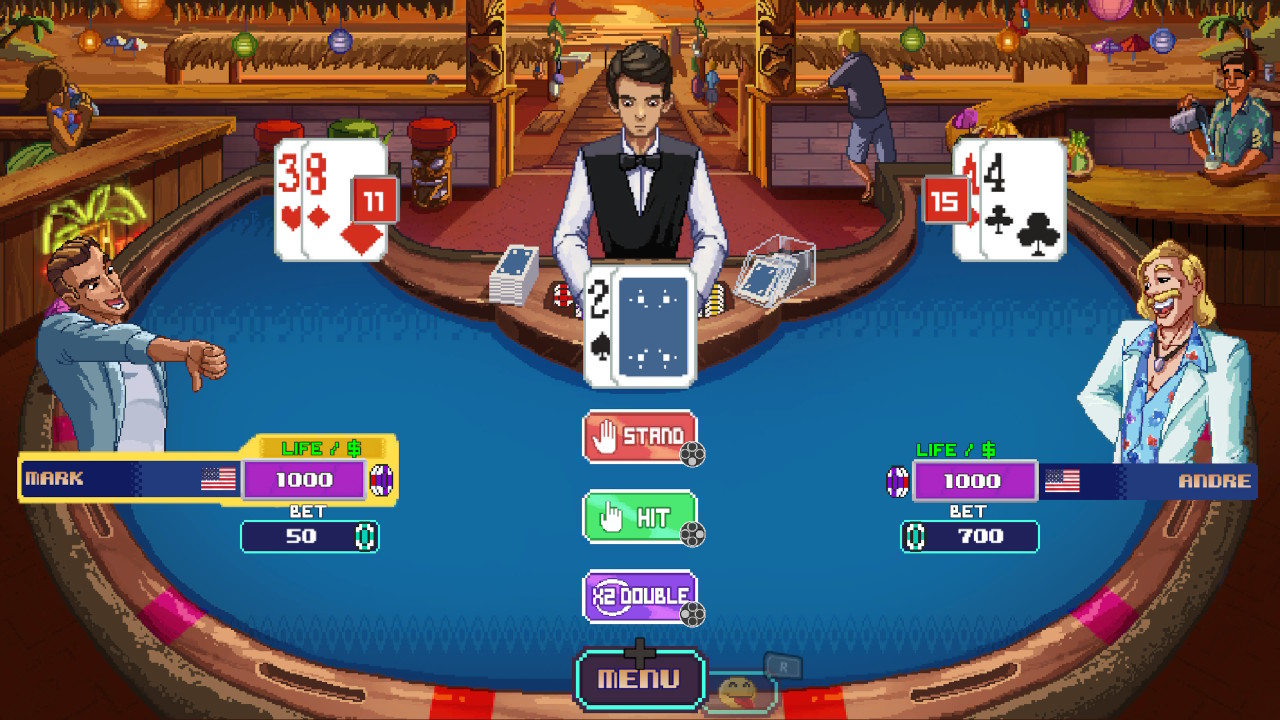 Super Blackjack Battle II Turbo – The Card Warriors (which, do I need to say there wasn’t a SBB1?) follows all of the traditional Blackjack rules, which works out and also doesn’t in the same swing. Double down, splits, insurance and Blackjack bonuses are in effect, though I felt like I saw the dealer almost never get a Blackjack, so I stopped buying insurance and it never really affected things. There were a couple of oddities, like being asked if I wanted to double down on a 14, which…what? I suppose it worked because one of my cards was an Ace, but in what world would that make logical sense? Additionally, there was a time that I got a pair of Jacks and was asked to split, which I happily agreed to despite not having enough money. The game charitably and miraculously just floated me the extra money for the split, and then let me keep it when I won. In what world does the house just give you 500$ because you should have the best chance to win? Still, I wasn’t complaining, and I made it through the hand a winner. Still, overall, this is Blackjack, and it works great for what it’s trying to be.

Additionally, the CPU does get progressively smarter and more cautious with their bets, but they still can’t beat the fact that I have unlimited continues, which brings us to the catch-all strategy for the game: all in the first hand. Just bet everything and, if you go bankrupt, reload and try again. Successfully winning an all-in the first hand disrupts the entire strategy for the remainder of the rounds, and the CPU will almost certainly make a mistake and lose a healthy amount trying to catch up. I defeated one opponent in two rounds thanks to this, and I was grateful to have the taunt button handy because, hey, not my money. If you want to do things the classy way and not count on imaginary recovery tactics, be my guest, but you’re the one playing a game where you’ve got a Street Fighter II inspired avatar to go play cards in casinos across the continents.

Simply Blackjack and Party Mode are still Blackjack, just not in cool, globetrotting scenarios. Simply Blackjack allows you to play as any character you’ve unlocked, in any casino you want, for as long as you want. Run out of money, spin the wheel: you’ll win some credits, though maybe not too much, and you can keep going. Simply Blackjack is the only way to unlock one character through an insane get of 100,000 credits, so good luck grinding that if you’re utterly determined to do so. Additionally, Simply Blackjack does something that regular solo Blackjack does not: convey crushing loneliness and isolation. Usually, you play solo Blackjack in a tight, handheld mode that focuses on your hand and the dealers and that’s it. But, with this game, you get to see the whole Blackjack table, spread out before you, completely devoid of other players or supporters. Were you concerned that your game didn’t feel quite depressing enough? Good news, we got you covered! Seriously, I’m sure it probably looked cool and felt cool for Stage Clear Studios, but it’s way too stark for my liking. 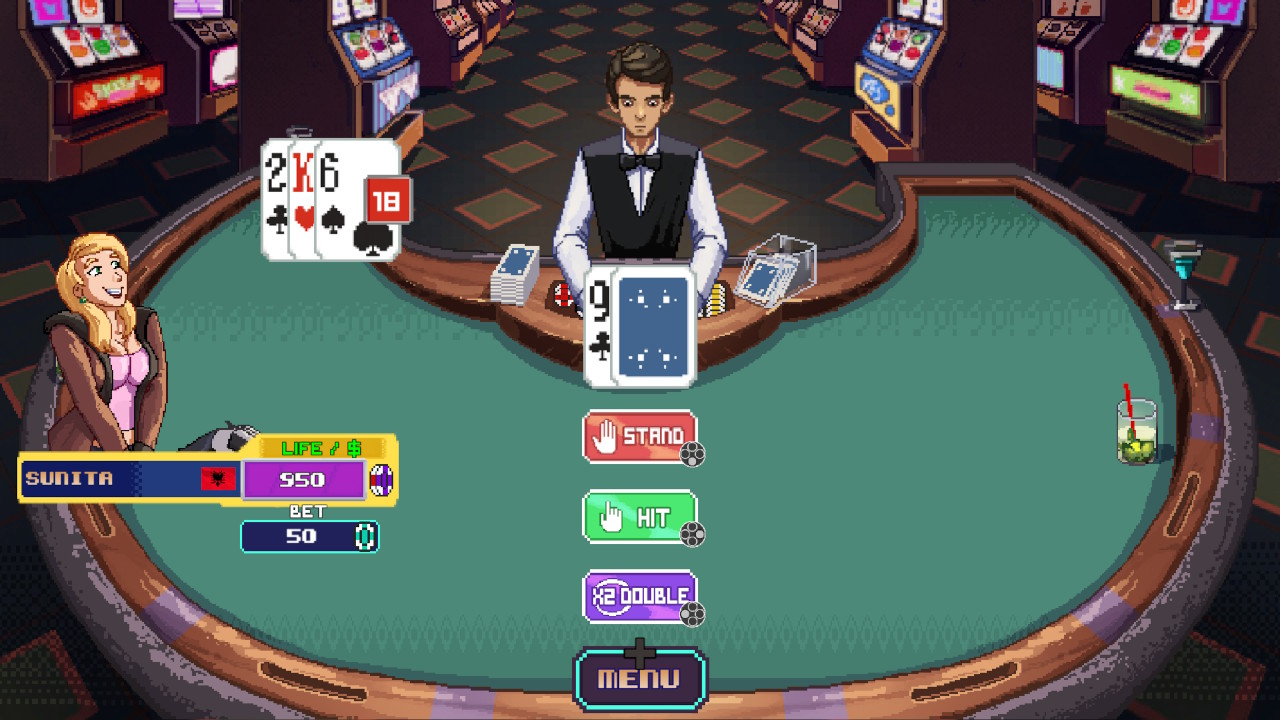 Lastly, Party Mode. Party Mode lets you activate four characters of your choice to play the night away in a casino versus each other. This is, in theory, a good way for a bunch of people to all enjoy Blackjack together, but you have to do the old controller pass setup. This feels so awkward on a console that’s been all about players coming together and sharing games together, because there’s at least one other JoyCon readily available for everyone to use. Still, the single pass works, and it’s not like anyone needs to hold the JoyCon for long. Bet, choose your move, pass along. The winner is whoever has money at the end. Keep playing until you’re all done. It’s still Blackjack: there’s no chance of a magical encounter cropping up anywhere.

Despite the simplicity of the core gameplay, Super Blackjack Battle II Turbo – The Card Warriors still is incredibly endearing due to the effort put in a nod to Street Fighter, SNES era. The map where you fly between casinos, the character’s sprite designs, even the win/lose dialogue between matches complete with altered appearances to show humiliation, it’s all spot on its imitations of the Capcom classic. The music evokes that feeling of a great faceoff in parts unknown against a worthy opponent, including the music speeding up and getting more urgent when only a couple of hands remain. And even the way the text flies in when you are the winner or the loser is pitch perfect. It’s enough to get a good chuckle out of me, and that’s sometimes all you need.

There was potential for Super Blackjack Battle II Turbo – The Card Warriors to bring some new features to their console debut on the Switch, and maybe that opportunity was lost. For many people, this won’t be worth an investment: a card game that pokes fun at a fighting game but is still just a card game is a weird sell. But, for people who really enjoy Blackjack, this is a solid, decent variant and certainly a lot more appealing than one of those handheld players that you can get in the Vegas convenience stores. And, for fans of Street Fighter, it might be worth a look to see the style properly parodied in a genre other than “another fighting game.”