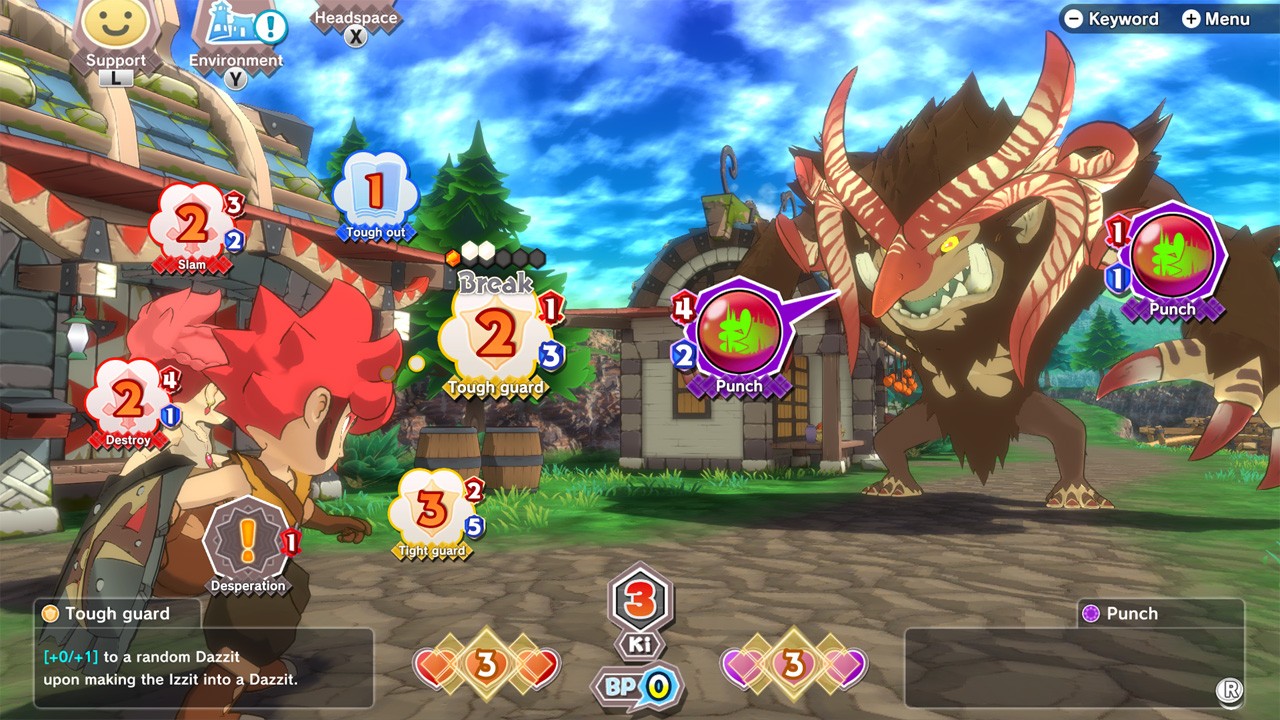 Little Town Hero tells the story of a young hero named Axe (or whatever name strikes your fancy) and his quest to find a way out of the protective wall around his boring hometown—the kind of town where everyone knows everyone and labour is part of the daily routine—and into the dangerous world beyond. Danger finds its way in, as danger tends to, and the quest changes course to get to the bottom of how these previously fictitious monsters are made. Along the way you’ll get into boyish peeing contests with your copycat rival, shear sheep, fight monsters, give a gift to your childhood sweetheart, and become a hero.

I feel as though Pokemon is the one arena where Game Freak has excelled in the past decade and everything else has been a pet project that proposes novel ideas, but flubs on the delivery. Little Town Hero is a good example of that. Everything from the character models to the speech sound effects and soundtrack are bursting with charm, but the delivery leaves something to be desired.

Little Town Hero is one of those linear adventures where your character won’t take a single step off the beaten path. Despite being something of a misfit and a trouble maker, Axe will constantly remind you that you have somewhere else to be if you try and go in any direction besides where you’re supposed to—which is a shame considering how vibrant and cutesy Little Town Hero‘s presentation is. Perhaps the reason for that is because there’s just nothing worth seeing off the beaten path? Most buildings can’t be entered and it isn’t as though there are treasure chests to open or items to otherwise collect. Eight out of ten NPCs also share the same character model if they’re not important to the story; effectively creating a pretty, hollow world in which I wasn’t particularly invested.

So, exploration was a bust but I had high hopes for combat. Little Town Hero‘s combat functions like a card game where each “card” has defense and attack points and are used to break through each other’s defense before actually damaging the other combatant. Introducing: Izzits and Dazzits. Izzits are ideas that haven’t been turned into attacks by spending energy points. Dazzits are fully realized Izzits. 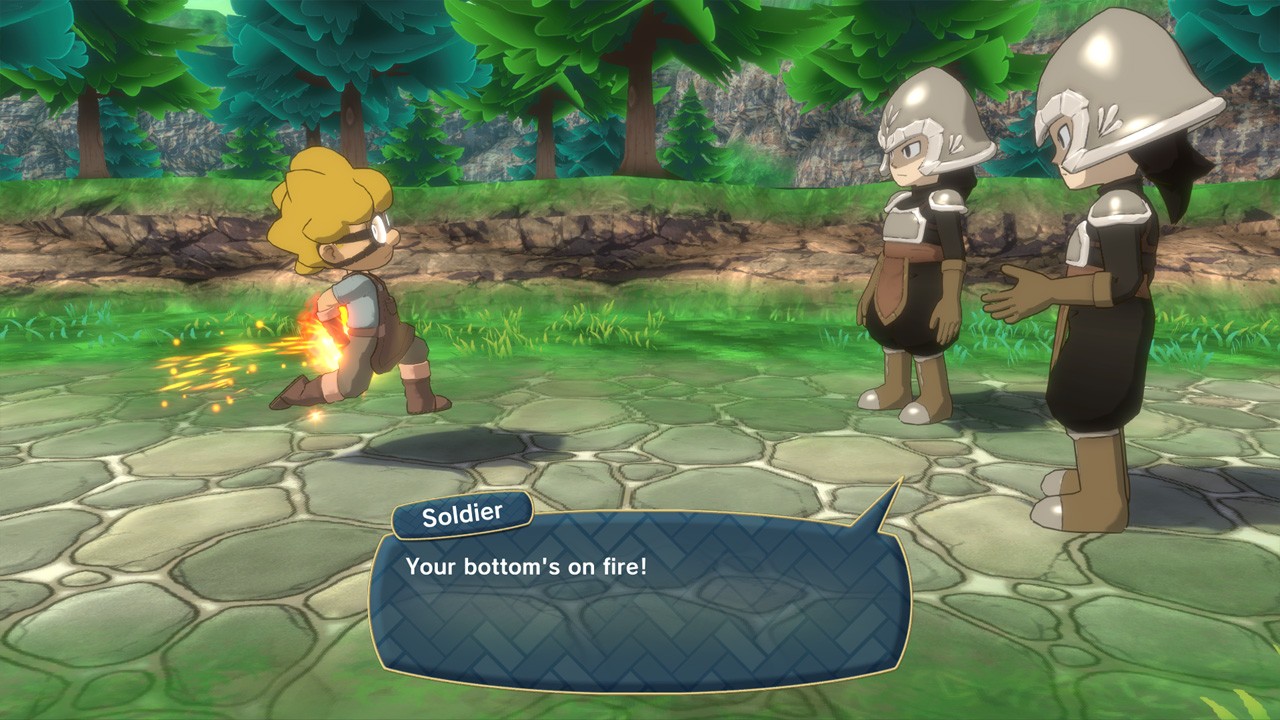 There are three types of cards: attack, ability, and guard. The UI is neat and unobtrusive, telling you everything you need to know at a glance right on the card in question: energy cost is denoted by the big number in the middle while the attack and defense stat are marked with a sword and shield respectively. Meanwhile, the card type is easily recognizable by colour; red for attack, yellow for guard, and blue for ability. Your available, useable energy is represented by little orange dots.

In order to use a card you must expend energy to turn it from an Izzit into a Dazzit. Similar to Yu-Gi-Oh where changing your attack/defense stance activates the card’s abilities, changing an Izzit into a Dazzit has special effects Dazzits, so it pays to read the card description carefully. It also pays to be mindful of the distinction between Izzit and Dazzit. Early on, I didn’t realize that, while changing an Izzit into a Dazzit, the card effect only applied to other Dazzits in my hand. I had previously only been activating Dazzits when I was going to use them, rather than just having them all ready to go in my hand before launching my attack, but I know better now.

Guard Dazzits can be used multiple times so long as they aren’t broken and only require the initial amount of energy used to turn it into a Dazzit. If they still have defense left, they roll over to the next turn, making them a vital part of getting ahead. Attack Dazzits can’t be used again during that turn, but they do roll over if they aren’t broken. Enemies aren’t restricted by energy, but they do have a smaller hand, meaning you can focus on breaking the few Dazzits they have. To break your enemy’s Dazzits, your own must have a greater attack stat than their defense stat.

If you don’t break all of the enemy’s Dazzits, there’s no penalty and the battle continues to the next turn. If you do, you get something called an “All Break,” after which one of two things can happen. If you have enough energy or an unused attack Dazzits, you get what’s called “chance turn,” during which you inflict damage directly to the enemy. This is the only time you can actually deal damage to the enemy’s health. For whatever reason attack Dazzits that haven’t been broken roll over to the next turn, but they can’t be used during the chance phase. This essentially means that early on in the fight when you have very few energy points to utilize, your odds of dealing any damage to the enemy is very low.

Little Town Hero attempts to rectify that in two ways, the first being the other outcome of an All Break. If you get an All Break, but don’t have the energy to attack or even have an attack Izzit available, you’re instead given BP and the battle continues to the next turn. BP can be used to swap Izzits from your headspace (your deck in this card game comparison) with Izzits in your hand, which gives you some control as to how many attack Izzits will be in your hand during an All Break. Unfortunately, this isn’t foolproof as you start with a small amount of energy and that makes it likely won’t be able to attack anyway. So, Little Town Hero gives you this red gem that fills up some at the end of every turn and, eventually, it fills and the number on it (i.e your total energy) increases. This means that the longer combat drags on, the more Dazzits you’ll be able to utilize in a single turn. 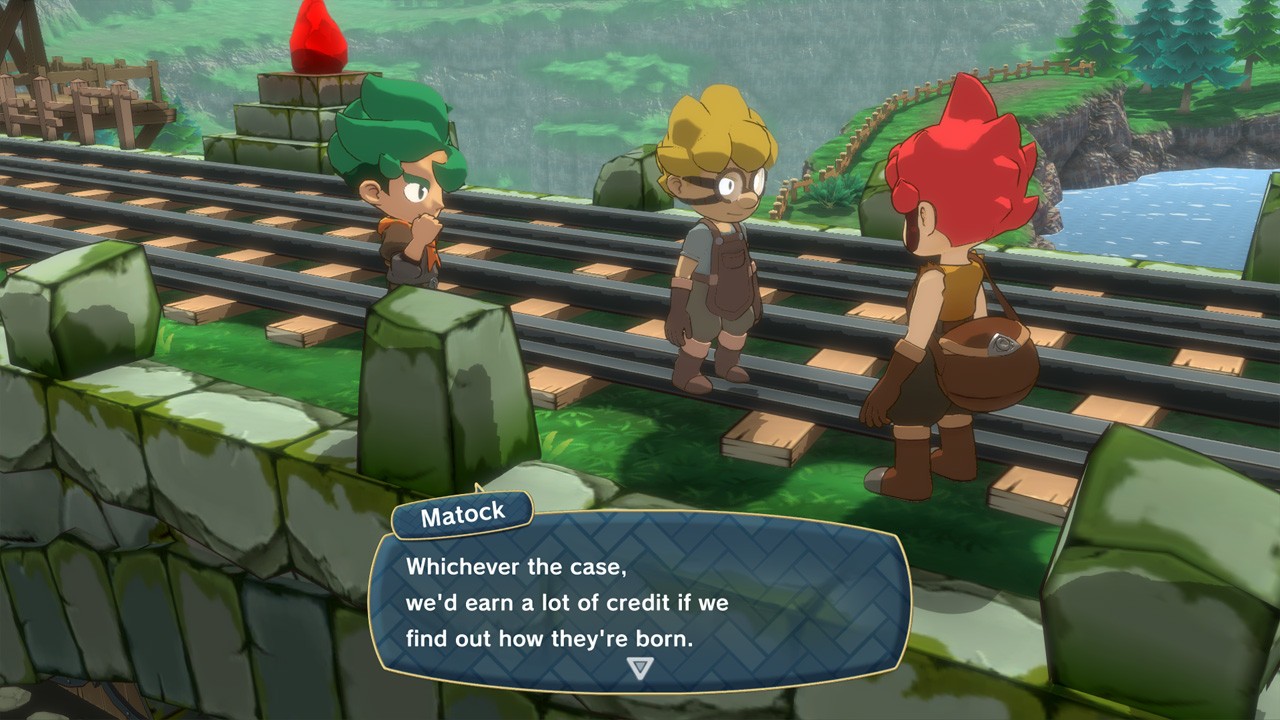 Which is all well and good except if you happen to have bad luck and never get enough attack Izzits in your hand off the bat, you fall into this drawn out cycle of inflicting All Breaks followed by BP awarded until you finally have either enough energy or the right combination of Izzits to damage the enemy directly. Combat then boils down to a waiting game; waiting for your power to build up after multiple turns so you can use more Dazzits and for the right combination of Izzits to come up so you can actually inflict damage rather than just rack up BP. During battles against monsters, you can add the fact that after every turn there’s a dice roll to arbitrarily change locations, and given combat can last upwards of 20-30 minutes it can become a battle of attrition. There are also support characters loitering around the field of battle that can offer additional skills, but honestly, it’s not worth mentioning. If the other aspects of Little Town Hero outside of combat were more engaging I could forgive a long battle or two, but as things stand, the boring non-combat combat elements just add insult to injury.

Repetitive music during combat and lack of fancy attack animations also make for dull encounters. Seriously, no matter what Dazzit you use Axe goes through the same animation except for the strike that ends the battle, during which he adds a bit of a spin (woo). Your battle partners are also repetitive. Your nemesis, Matock, is always finding some reason to battle you and it gets annoying fairly quickly. He’s the kind of kid that insists on one-upping you in every way he can, but lacking any sort of real talents he just comes off as a snide and unlikable little prick. On that note, there are only a handful of monster to fight so get used to seeing the green-haired git.

Little Town Hero seeks to remove the traditional grind associated with RPGs and claims that a good strategy is all you need in order to proceed. But no matter how sound your strategy may be, if you don’t end up with the right hand you won’t be doing any damage to your opponent. Party management boils down to powering up Izzits/Dazzits using Eureka points. If they’d been rebalanced to cost less energy early on until you upgrade them, combat would have been so much better. Eureka Points are awarded after battle and for completing side quests. I probably don’t have to tell you this, but these are fetch quests wherein you walk to a particular place or fight a particular enemy and therefore add nothing of merit to the gameplay loop.

An average RPG in all aspects. While Little Town Hero tries to be different, it trips up on the delivery. Although combat is a unique idea in theory, the execution leaves something to be desired. Add to it an average, predictable storyline, lifeless and linear world, and a hit or miss cast of snotnose brats and you’ve got yourself a game that won’t wow anyone. Still, if you’re somehow hurting for RPGs despite the Switch’s large library, Little Town Hero might be worth getting in a steep sale.

Little Town Hero has some big ideas that don’t quite translate into good game mechanics.