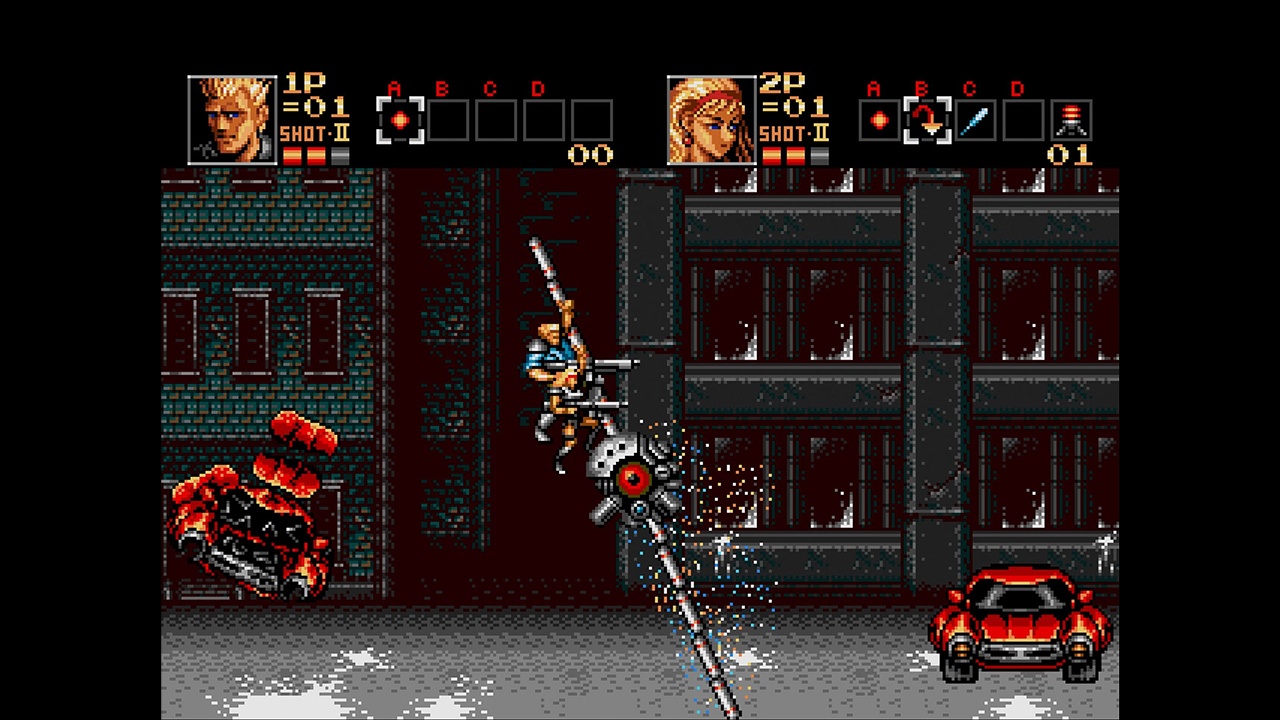 There is nothing quite like revisiting some of the games that helped to paint the surroundings of my adolescence. As much as I’ve enjoyed the Arcade Collections that Konami has been releasing this year, it’s been hard to fully align with all of them. The initial collection was such a great look into Konami’s arcade roots, yet there wasn’t a lot that I recognized other than by name and by reputation (certainly not by play). The Castlevania Collection was fantastic, and I’m super grateful that those games exist and that I got a chance to play them, but, again, I only ever really played the first NES title back in the day. Having panicky grandparents, afraid that I would get scared or worship the devil because of a video game, will do that to you. But Contra…Contra has a seat at the table. Contra was something that literally everyone, including my father and mother, took a shot at. Contra was a game that my uncle gave me when I was probably seven, and Contra is what got me into Nintendo Power more than anything else because I needed HELP with that damn game. Now, with the Contra Anniversary Collection, Konami and M2 paint a magnificent picture about what made this tough-as-nails series so popular, and allows new and old players alike to get mercilessly shot over and over again at a pretty fair price.

First and foremost, if you don’t know the lore and meaning behind Contra, it’s a tale that becomes incredibly convoluted if you allow it to. It takes place somewhere around the year 2631, and it just advances from there, so the future, as always, is grim. Alien invaders have come to Earth riding on the back of a massive comet that crashed into New Zealand, and the aliens, known as Red Falcon, want only to exterminate the human race. Naturally, we are less than thrilled by the idea of extinction and we have a couple of kickass commandos named Bill and Lance come in and save the day. And save it again. And really just keep saving it because, as it turns out, the Red Falcon doesn’t take hints well and continues to throw even bigger and badder onslaughts of invasions our way. For whatever reason, they never stop, and we never stop, and that’s why there’s been about fifteen games across so many platforms that all have one core value in mind: shooting out of a bunch of aliens that would come to invade us. Unless, of course, you lived in Germany or parts of Europe in the 90s, at which point you got a whole different lore due to certain restrictions about violence in video games. Thankfully, the Anniversary Collection covers all that and more in the digital booklet included, plus you get a chance to see some of the madness yourself.

The Contra Anniversary Collection is probably my favorite one to date, simply because of the test of time that the included games withstand and conquer. With ten titles to choose from, and several of them being repeats of themselves, it sounds like it would be a massive waste compared to the variety of the Castlevania Collection, but the arrangement makes sense. Firstly, at this point, we’ve all gotten on-board with Konami doing collections that occur earlier in the company’s history, so hoping that we would get Shattered Soldier or the like was totally out of reason to begin with (seriously looking forward to the unannounced second string of anniversary collections next year). Additionally, the first Contra has three different flavors to taste on this anthology, and, hint, it’s still the best damn game, so I can’t take umbrage with that. The concept of a run and gun that was absolutely punishing remains something that gets me giddy, and all I’ve wanted for years is to return to Contra and find out if I was actually decent at the game or just being carried by the Konami code (which works on select titles, so don’t miss out!). Turns out I am a rubbish shot who lived to see the end of the game purely through doing two player with my brother and using all three contributes, effectively allowing my stupid butt to get shot NINETY times and still calling it a victory. I’m a failure at life. 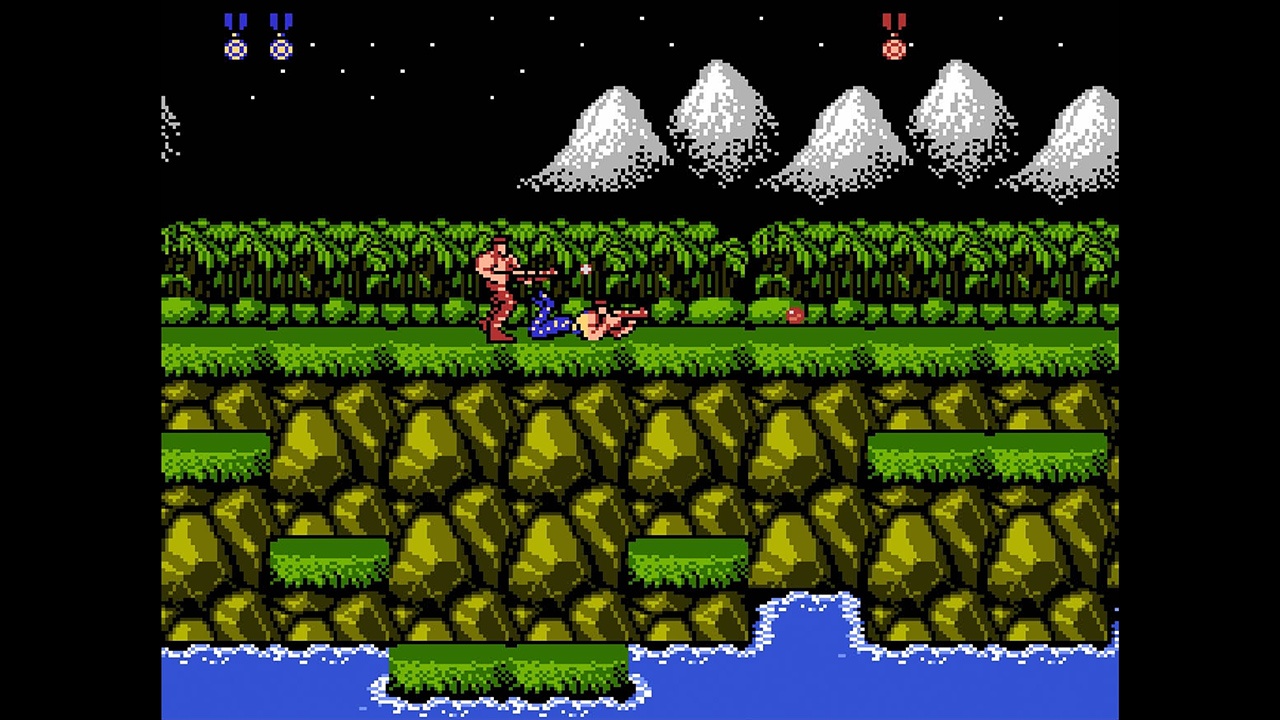 The first instalment, as previously mentioned, gets three treatments, and players will be most at home with the NES and Famicom editions. While there’s virtually nothing different for the Japanese release, there are subtle changes in the backgrounds and visual effects, making it sort of a guessing game/I Spy variant, but you also need to not get shot to death in the process. For the console releases, the emulation is pitch perfect, running buttery smooth and never once lagging or stuttering during even the most “intense” explosions. The first arcade edition, however, does not stand the test of time, at least in my opinion. The graphics look better, sure, but there’s something terrible with the emulation that causes massive slowdown if you’re unlucky enough to have an upgraded weapon while trying to deal with a boss battle. Also, the music is clearer, but something feels inherently wrong about that. The tinny chiptune of Contra is strong in the mind’s ear with my memory of NES days, so making this more dramatic soundtrack just feels strange, like someone serving a ham and cheese sandwich on fine china. The sandwich will work great on a paper plate, thanks, don’t put on airs.

Moving into the other titles, Contra Anniversary Collection shines with showing exactly how they were able to evolve the series as technology moved forward and the games became more complex. Super C is essentially the first one on steroids, allowing players to drool over the maxed out enemy density from the NES era and the scrolling screen style that was discovered a couple of years after the first Contra. The Alien Wars (the SNES Contra) utilizes the full 16 bit goodness to allow for graphics closer to the arcade versions without needing to sacrifice resolution or style, and adding in different ways to interact with scenery (hanging onto things, swinging) while still blasting everything that moves to hell, and in a much greater pixel density than previous iterations. Unlike the Castlevania Collection, I really got a better look at the Gameboy releases and saw a better result than what Simon Belmont and his gang went through. The handheld version of Contra is, without a doubt, one of the more superior of the Gameboy games in terms of execution and representation. While the graphics are clearly lower in quality and the sound a bit more high pitched, Konami did a bang up job of balancing the limitations of the hardware while keeping the intensity of the game alive, choosing to make the game appear “easier” while allowing for the whole experience to stay streamlined. They could have made it a glitchy mess, but they didn’t. 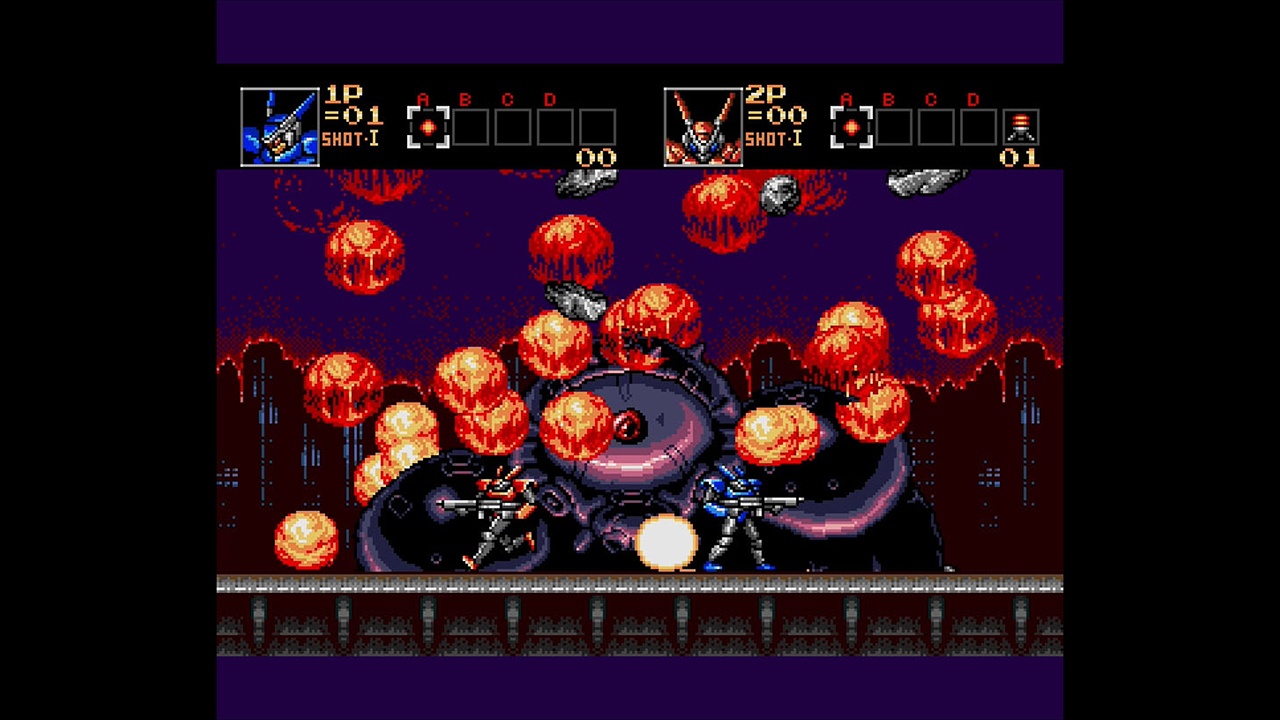 Also, I wish I had grabbed a Sega Genesis when I was younger, because this is the second time I’ve seen a Genesis edition of a franchise that I enjoyed on the Nintendo and been awed by how strong an entry it is. Contra: Hard Corps is a fantastic game, saturated in blood and great alien sprites with a good choice of soldiers to choose from at the beginning, tight controls, a goddamn secret ending (those were a thing in the 90s???) and a soundtrack that is still evocative of Contra but different from the others. I realized that most of the Nintendo soundtracks all sound the same with various upgrades that came with generational gaps, but Hard Corps legit stands on its own with a grim, driving effect to highlight how much of a mess the world is in with an alien-based terrorist attack. Like, there’s a real story, and, since Contra Force is nowhere to be seen on this collection (good call, Konami), this is your only chance to enjoy some actual character selection and plot development.

Lastly, after you read the digital book front to back to see the information and interviews and beat Super C arcade edition on Hard (it runs so much better than the first Contra arcade version and is arguably better than the NES release), you should sit down and play through Probotectors. Now, I get it. We don’t want to show violence on people because that’s disturbing to children and has a clearer correlation to creating violence on people. But it’s borderline surreal to watch two great Contra games get this weird, robotic makeover to cover up the blood and guts and just make it about robots fighting aliens. The best part is, the plot can easily be ported to the roles of robots instead of Bill and Lance, and it actually justifies the way the games work in a vacuum. The success of the Probotectors validates the formula of Contra to show that, while some people might prefer shooting humanity, the intense, fast reflex framework of running and gunning works for anything. Konami would later allow Probotectors to even appear in official Contra games later on down the line. Having two great Probotector games in the collection not only gives a global nod to how different people gamed growing up, but also gives avenues for parents nowadays if they want their kids to stay away from direct people violence for a while. I mean, it does make sense, I can’t argue with that.

As a late note to the article (update came in shortly before the publication), Konami has heard fans and decided to include a bunch of the original Japanese versions for an added bonus to ALL their Anniversary Collections. While this might not mean a lot to some fans, it’s a huge move forward for both the company and for Japanese fans/fans of original releases. The Japanese editions are added to separate menus at the bottom of the main menu, and all are ready to go immediately at no additional price. Seriously, while it might not seem like a lot, it’s an unexpectedly cool and supportive move, and it adds a TON of additional games to the Castlevania Collection (where the story element is arguably stronger) and a few extra goodies to the Contra Collection, which is still piping hot at the time of this writing. Konami is putting their best foot forward with these older releases, and I hope the quality continues as time goes by.

The price is right. The emulation is solid. The digital booklet is essential in capturing the core timeline of the games, some great quips from creators, and a bit of an explanation as to WHY the homing missiles are the most OP weapon in each game. And the games inside are still fantastic one or two player works of frantic genius. The Contra Anniversary Collection is the pinnacle of what Konami brought to the table with their throwback titles this year, and it is a must have for any 8 or 16 bit players who still have itchy trigger fingers. I don’t even have to type in the code, you know what to do to make the game sing, and each and every one of you will. And, for newcomers, don’t worry: the code is extremely easy to look up. Up. Down. Down….

Konami rounds out their Anniversary Collections with the best of the run and gun era, and the Contra collection delivers on every single note.