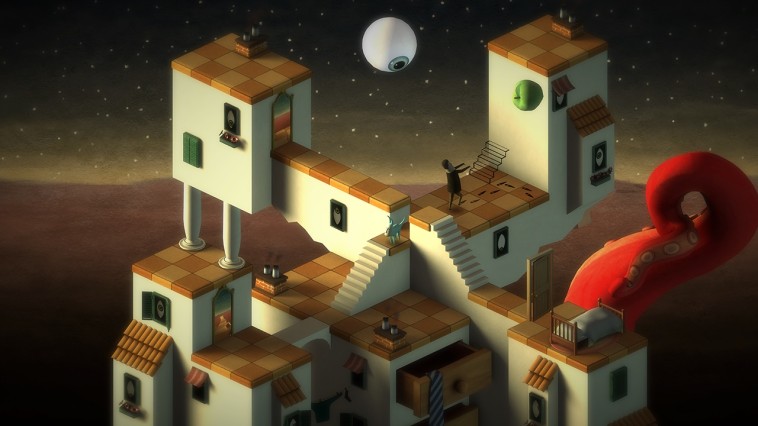 Back to Bed for the Nintendo Wii U is an interesting title which reaches beyond the realm of being merely a game, becoming an immersive experience. By combining its gameplay with creepy images, wacky physics, and cryptic dialogue, the game becomes an eerie title bound to excite anyone who takes the time to play it. While puzzle games of this kind are far from original, with even games of similar art styles and physics being less than uncommon, Back to Bed still does what it intends to do well, and makes a nice addition to the collection of games of this genre.

Visually, this game is phenomenal. The main game features uniquely designed levels within bizarre worlds. In many instances, the player may want to ignore the objective of the level for a little while just to soak in the environment. Thankfully, there is no penalty for messing up the objective (which I’ll explain later when I talk about gameplay), giving the player as much time as they desire to study the level, whether for aesthetic or informational purposes, before actually tackling the level. Each character is uniquely and peculiarly designed, helping to create the initial spookiness which the game intends to convey.

Further adding to the creepiness of Back to Bed is the audio; or rather the lack thereof. Audio cues in this game are extremely sparse, forcing the player to play in near silence for most of the game, which creates an uneasy, suspenseful mood. This is further added to by intermittent cutscenes, which seem to be drawn in the style of a children’s book. These cutscenes are written in the form of poetic riddles and are highly cryptic, leaving the player wondering what exactly they are supposed to mean. I did notice some grammatical mistakes in some of the introductory text on one of the early levels, which is always a minus, but I will say that Back to Bed has little going against it besides this one minor flaw. 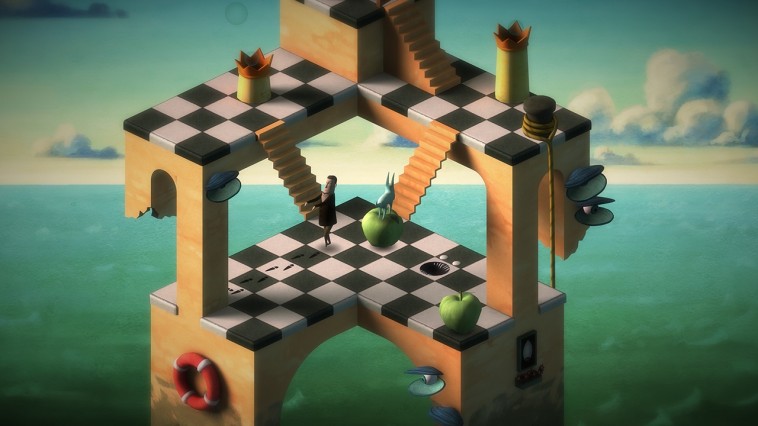 The gameplay of Back to Bed is pretty straightforward and simple. The player, controlling some dream-world dog thingy, must guide a sleepwalking character named Bob safely to his bed. Bob always walks counterclockwise, so the player must intercept his path with giant apples in order to properly guide him to the goal. The premise is pretty easy, and the game itself is very forgiving, as causing Bob to fall off the stage does not automatically result in losing the level, and even losing the level has no real repercussions. In this sense, Back to Bed cherishes the overall experience more than the concept of providing a challenge, giving the player plenty of chances to figure out each level.

As the game progresses, levels become a little more tricky. Not necessarily because the puzzles are more complex, but due to the presence of optical illusions which the player must figure out in order to guide their character and collect apples accurately. Such optical tricks include transparent staircases which allow the player to walk up walls, mysterious portals which transport any character elsewhere on stage, and platforms which the player can leap off of though they appear to be a continuation of existing platforms. This further adds to the eerie dream world setting which this game seeks to create. In addition, the player must guide Bob properly in order to help him avoid moving alarm clock enemies, which move “counter-Bob-wise” as the game calls it. The player may do this either by stopping Bob from making progress when clocks are nearby, or by positioning apples to make the clocks fall offstage. 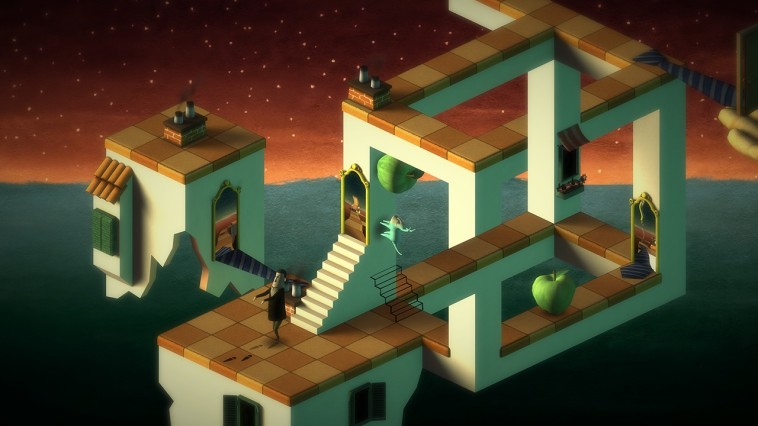 As someone who is dreadfully bad at puzzle games, one thing I can confirm is that this game is extremely easy. The puzzles require little mental effort, especially in the first world, and the game seems to have a relatively slow learning curve. This may be a pro or a con, depending on what the player is looking for in a game. For experienced puzzle game players who are looking for something new and exciting, this game might prove to be a disappointment. However, for those new to genre, Back to Bed seems to be a great place to start.

While Back to Bed may not be entirely original in format and design, it does a phenomenal job tying every aspect of the game together in order to create one uniform experience. Every single detail, from gameplay mechanics, to cutscenes, to level designs, and so on, works towards the single goal of immersing the player in the creepy dream realm in which it takes place. If there is a complex plot, I have not yet been able to figure it out, though I think the mystery this game provides is more important than whatever plot there may be. No other game stays true to itself so fully as Back to Bed does, and for this reason, I think it’s certainly worth a try for any Wii U owner.