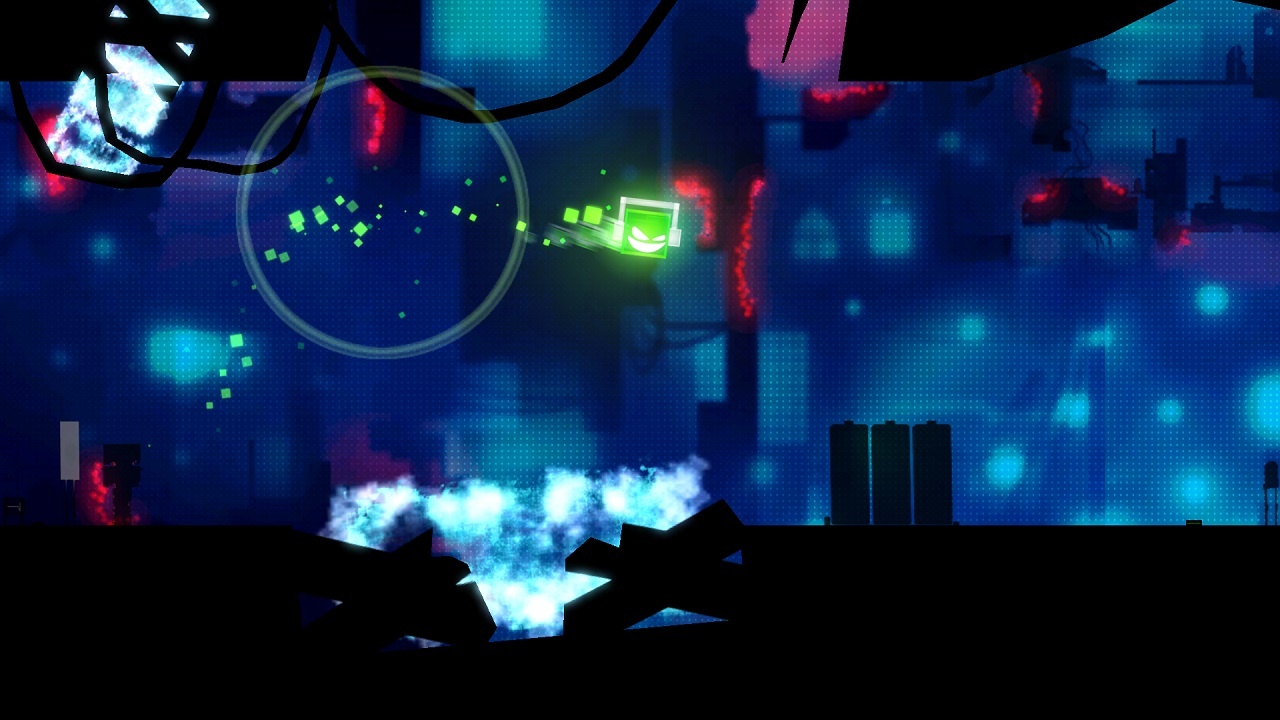 Musical journeys and explorations are always a favorite of mine, mostly because I love music. As I sit here, typing out this review, I’m enjoying some classic Tool and wondering if Maynard James Keenan will ever put out another album or simply evolve into a star being, like the end of 2010. But music, rhythm and beat have times and places within games. The lack of a soundtrack can be just as powerful as an omnipresence, and misused ideas or tunes can turn an otherwise pleasant game into something that seems oddly inappropriate. Inside My Radio does a pretty good job of keeping the music in the spotlight, but, as we’ll see, it can turn into something a bit obtuse in just a matter of seconds.

The premise of the game is one that was already a little outside the timeframe when it was published and seems even more removed in a late 2018 release.You play a glowing green LED, who finds itself given sentience inside a dying boombox, an appliance that I haven’t seen in roughly a decade. You gotta get the music going and find and contact other squares of light that are scattered within the machine in order to keep the party pumping, because once it’s over, it’s over. Each time you run into someone else, you get into a new soundtrack, a new type of beat, starting with traditional house techno and evolving into things like funk, trance and other pretty great soundtracks to help encapsulate the experience. But it all takes place Inside My Radio, so the risk and reward exist solely for the LED and all the others who still want to be busting beats in the future.

Far from a traditional rhythm game, Inside My Radio is a rhythm platformer with a puzzle element mixed in, asking the player to move, jump and slam in time with the music. Movement is free form, but jumping is not: try to hit the button off beat, and you simply glitch out and can’t do anything. The concept, from what I can tell, is to really get in sync with the soundtrack to keep things moving in a fluid, excellent way. You simply get the groove and are able to bounce off walls, break through platforms, and time it just right to avoid falling to your doom, missing disappearing ledges and activate spotlights at the right time. Along the way, there’ll also be smaller “mini game” type moments where you do other musically related things, such as a sort of Bemani segment in the middle of the second world. It’s a novel concept, and it’s mostly executed well. 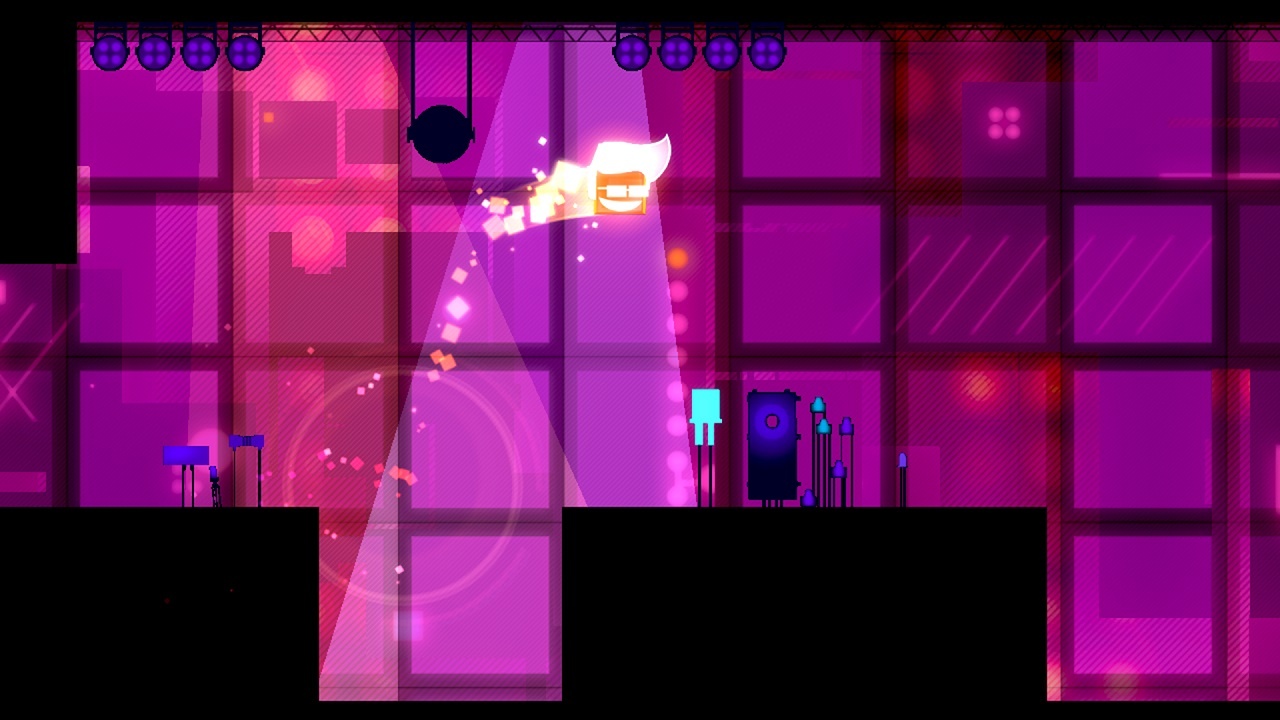 For what Inside My Radio seeks to accomplish in terms of idea, I think that it’s mostly successful. I love the aesthetic of the game, as the level design and world backgrounds truly look like a hyperbolized variation of the inside of a radio. Instead of a being a stark and sort of cold place, it’s thrumming with wires and lights, bulbs and arcs, and it gives a magical feeling to the idea of music crafting this landscape. The hues and the shades really fit the music and the atmosphere of each sphere. I especially loved the inclusion of this massive, movable, orange cassette tapes in one world that bumped along with a tribally inspired beat. And all the LEDS that you encounter that represent the different types of music are true in their design with the tunes that they’re bringing to the table. No one is an offensive stereotype, but you only have to look at them and say “oh, right, this is soul music, fair enough.”

In the same vein, most of the time the movements and control response of Inside My Radio are good for the mission statement. When you’re on point with the music, you seriously have a great time and jive along with absolutely zero hang ups or miscommunications. The game does a great job of molding how things should be, how you can hit the perfect spot to jump off, dash, hit the next wall, and climb your way up without any interference. In this way, Inside My Radio is perfectly crafted for speed running with a clear vanishing point as to when skill and the game’s limits can match up to make a great game. You don’t just have to understand the tips and tricks of where is the best place to take off from or when you can slam and get a stronger advantage, but also being able to keep time and make sure you respond in turn. Those without an ear for music will have a simply awful experience trying to keep up and do things in a solid fashion, so keep that in mind before diving in. 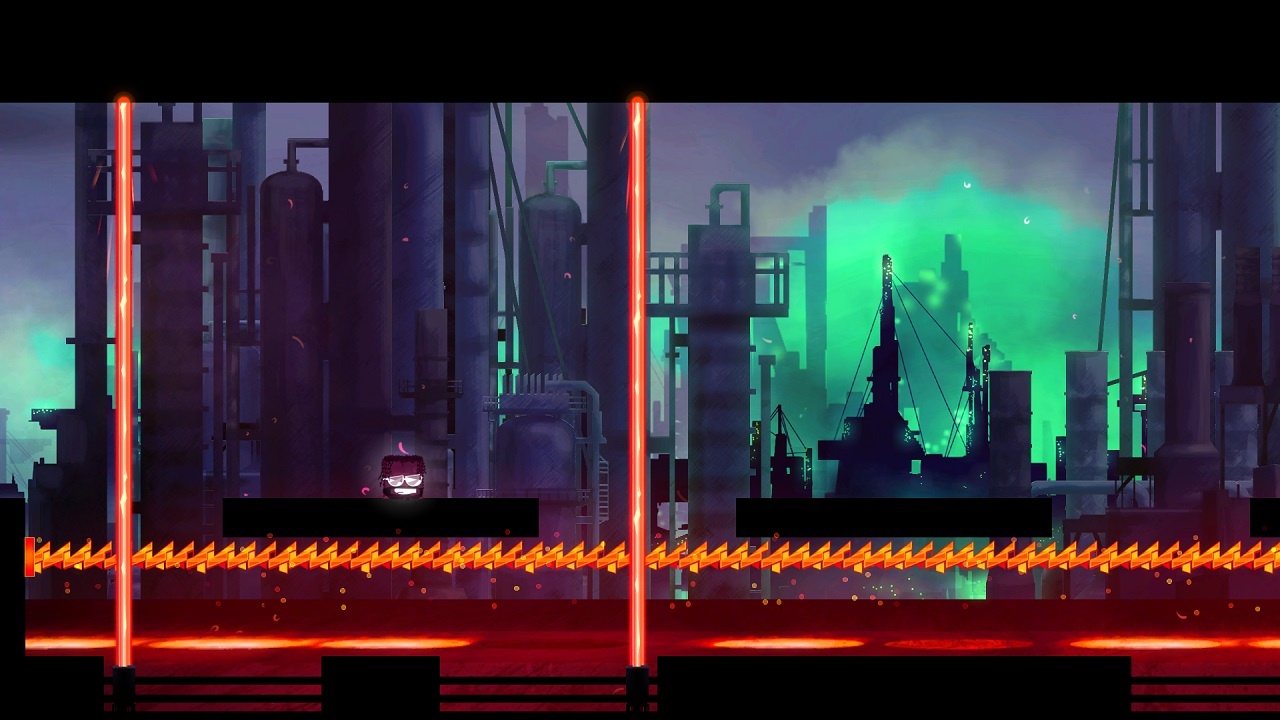 On the other hand, though, the game also feels especially unforgiving when things get off track. When you make a flub in a normal rhythm game, it’s expected that you’ll take a hit, get a “miss” or “bad” on that note and keep moving on. However, making a misstep here often results in losing a fair amount of work, and that makes for a bad time. If you are unused to dealing with half steps in music, or doing alternative beats, there’s a chance you’ll make a great jump, flub the dash, fall to your doom and totally ruin your timing on the level. It’s not something that’s enough of a problem to be an omnipresent hurdle, but it is something that I thought about more than twice in a game, and I was in marching band for a majority of my educational career. This means that the game ultimately has an entry point that demands you at least be able to keep and follow time in a reasonable fashion. If you’re tone deaf, or simply unable to follow the bouncing ball, the whole thing falls apart.

Having said that, Inside My Radio is a seriously fun time that can stand a bit uniquely, a bit proudly, amongst many other titles in similar but not quite genres. It’s got the chops and the design to be a good platformer, plenty of twists to be a decent attempt for speed runners, and a wide, well crafted soundtrack that’s different and audibly great across each “world.” There’s plenty of replay in terms of Time Attack and also beating your own personal scores, and it’s worth it to go back and enjoy some of the funkier times, because good music and good gameplay are a mainstay on any console. Just be sure to invest in some good headphones or a decent sound system: the last thing you want to do is miss out on the fun because the levels were off.

Inside My Radio Review

Inside my Radio brings in the noise & the funk, giving plenty for musical enthusiasts to enjoy as a platformer while leaving tone-deaf players out in the cold.