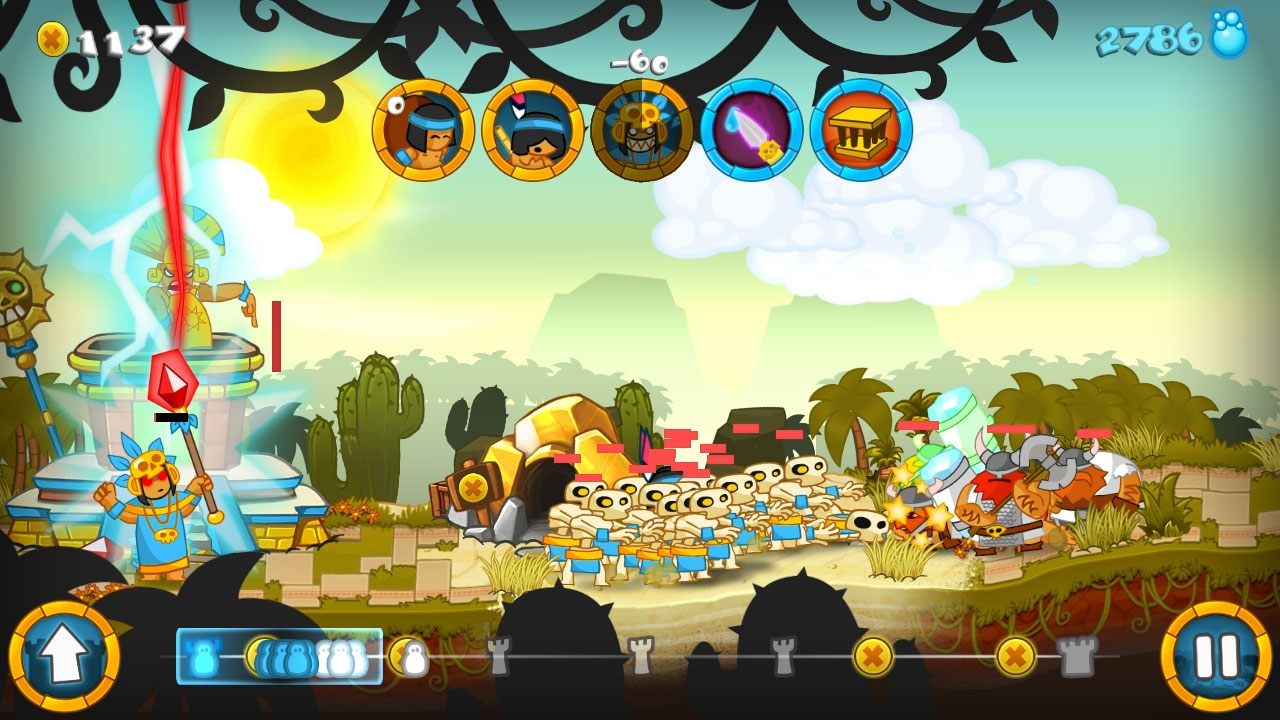 Swords and Soldiers is a 2D Sidescrolling real time strategy (RTS) game developed by Netherlands-based Ronimo Games in 2009 and ported to the Nintendo Switch by Two Tribes in 2019.  This game was the début title of Ronimo who went on to release Swords and Soldiers II: Shawarmageddon and the 2D MOBA Awesomenuats.  Ronimo was formed by a number of students from Utrecht School of the Arts, who sold their freeware game de Blob to THQ, who later developed a console version. The release of the game also coincides with the recent release of Swords and Soldiers II: Shawarmageddon for the Nintendo Switch.

Swords and Soldiers aims to take the concept of a Real Time Strategy (RTS) game and bring it to consoles by making a couple changes to the RTS formula, such as playing the game from a sidescrolling perspective and using the control stick to use units, instead of a mouse and keyboard. This streamlines and simplifies the genre for fun results, but still a noticeable departure from the PC RTS experience.

The goal of each match is to build up your forces and mana to fight your way to your opponent’s base and ultimately destroy it.  You do this by building civilians to collect and reinvest gold into building units, towers to block the path to your base, and researching new units and spells. 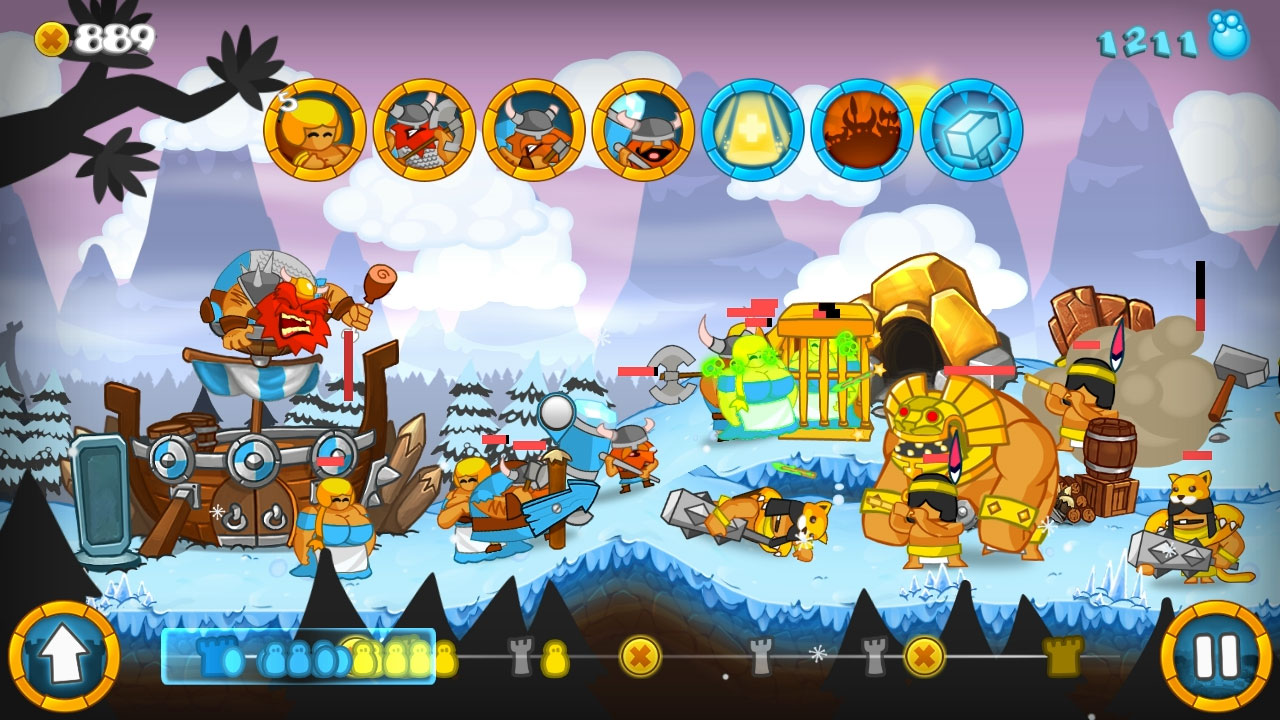 In each round of the game, you play as one of the three civilizations available: The Vikings, the Aztecs, and the Chinese.  The Vikings are slow and powerful, and good for defending.  The Aztecs gain mana through sacrificing their own units, but also have priests that turn the dead units into skeleton warriors, creating a unique dynamic of self-sacrificing and reviving to creating a strong army as well as generating mana.  Finally, the Chinese can build shrines, which increase their mana generation.  As such, The Chinese’s power is directly related to their level of map control, allowing them strong offense and weak defense.  Despite only three civilizations in the game, each feels mechanically unique and suited to different play styles.  No one civilization stood out to me as imbalanced, making it fun to play as all three against each other.

The game features four campaigns, which largely serve as tutorials to the three civilizations you can play as.  These tutorials effectively introduce the player to different abilities and their application in battle but are not challenging (except for the last level in the Chinese campaign, and Chief Meat’s Campaign).  The Switch release includes Chief Meat’s campaign was originally released as a DLC pack entitled the “Super Saucy Sausage Fest” (SSSF). This campaign offers some fun unique twists on the typical battles, such as collecting a certain amount of gold before an opponent does, winning a number of skirmishes with limited spells, and unique map designs.  This unique campaign adds some much-needed variety and challenge to the single-player experience. Additionally, there is a challenge menu with a few extra modes, such as an endless survival mode, or a mode where the player protects one unit only with magic. These modes offer a fun challenge for those who have mastered the campaign but are fairly basic.

Unfortunately, the game’s sacrifices made to bring the RTS genre to consoles starts to show during the most intense battles.  If the player needs to move the camera often, it is easy to scroll past the area of focus. Additionally, because the control sticks select the units and spells to use, it is difficult to place a spell in exactly the ideal place.  Some spells snap the target to specific units, but then in crowded spots, it is difficult to select the exact unit you want.  Finally, Just like many other RTS games, once one team is ahead in a battle, it is difficult to come back and save the game, creating prolonged games even though the victor is clear early. 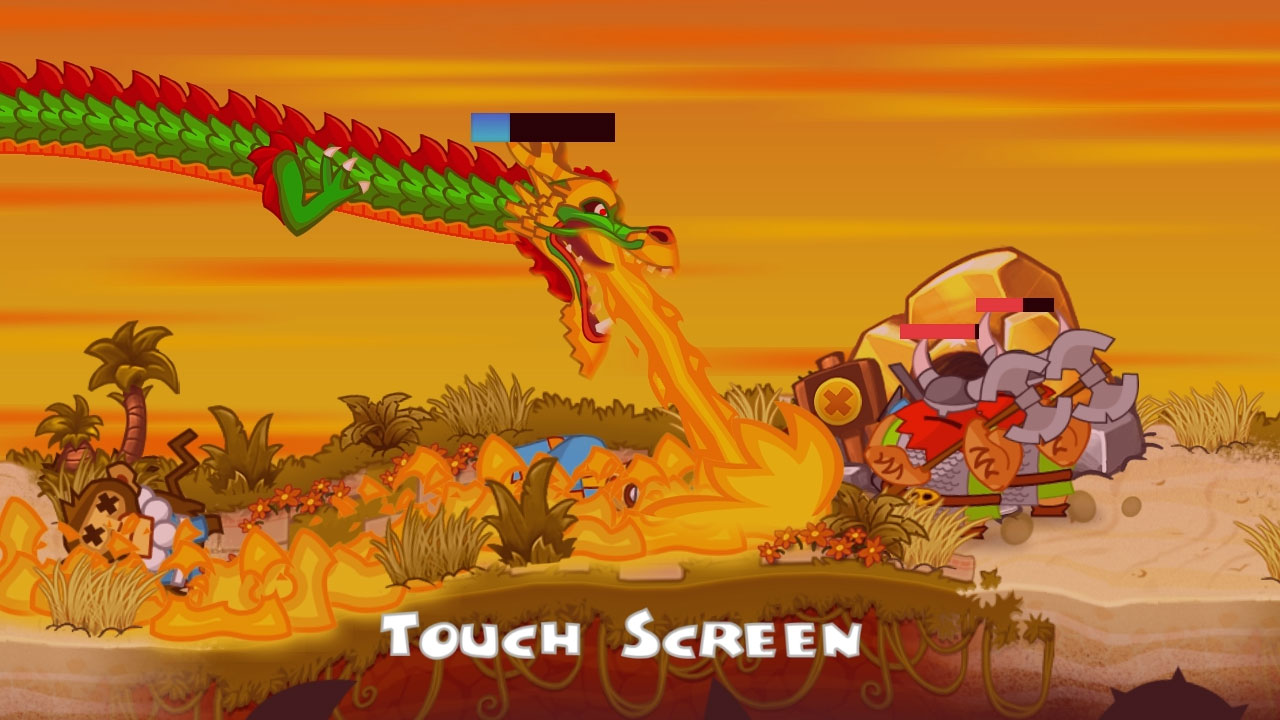 Sword and Soldiers features a gleefully colorful art style matching the absurd battles between Vikings and Aztecs. All characters have unique design and animations. The Aztec giant lumbers along the battlefield, smashing enemies, where the Chinese rocket-launcher bounces up and down giddily as his rockets propel him forward. Simple but humorous sound clips play upon unit creation, which in turn help create map awareness for when units are ready.  The campaigns feature a small frame story told through simple text boxes and player portraits, and involve petty characters fighting over barbecue, hot sauce, and toys.   The UI is simple and needs more polish. When multiple players are selecting civilizations, both controllers controller the same cursor, making it confusing when both players try to change their civ or team color. Additionally, the UI also accepts touch controls but doesn’t seem to recognize them if the player was also using a controller. Finally, playing the game against a friend in tabletop touchscreen mode works better than I expected despite the small screen size. Sometimes the player will still tap the wrong icon because the real estate is so small, but ultimately the experience was close enough to the TV.

Swords and Soldiers successfully recreates the RTS genre in a sidescrolling console format, with some compromises. These compromises become clear in difficult levels of the campaign, or in particularly intense matches against local multiplayer opponents.  The three civilizations available are all unique and fairly balanced for casual play. Their campaigns are successful in introducing the abilities of each one, but are easy and play largely the same until Chief Meat’s campaign.  The game’s ridiculous and colorful style features fun character design, fitting animations, funny sound effects, but an underdeveloped UI. Ultimately, Swords and Soldiers’s fun gameplay make it easy to recommend for those who want a local multiplayer experience and fans wanting a unique take on the RTS genre.

Swords and Soldiers’s fun gameplay make it easy to recommend for those who want a local multiplayer experience and fans wanting a unique take on the RTS genre.