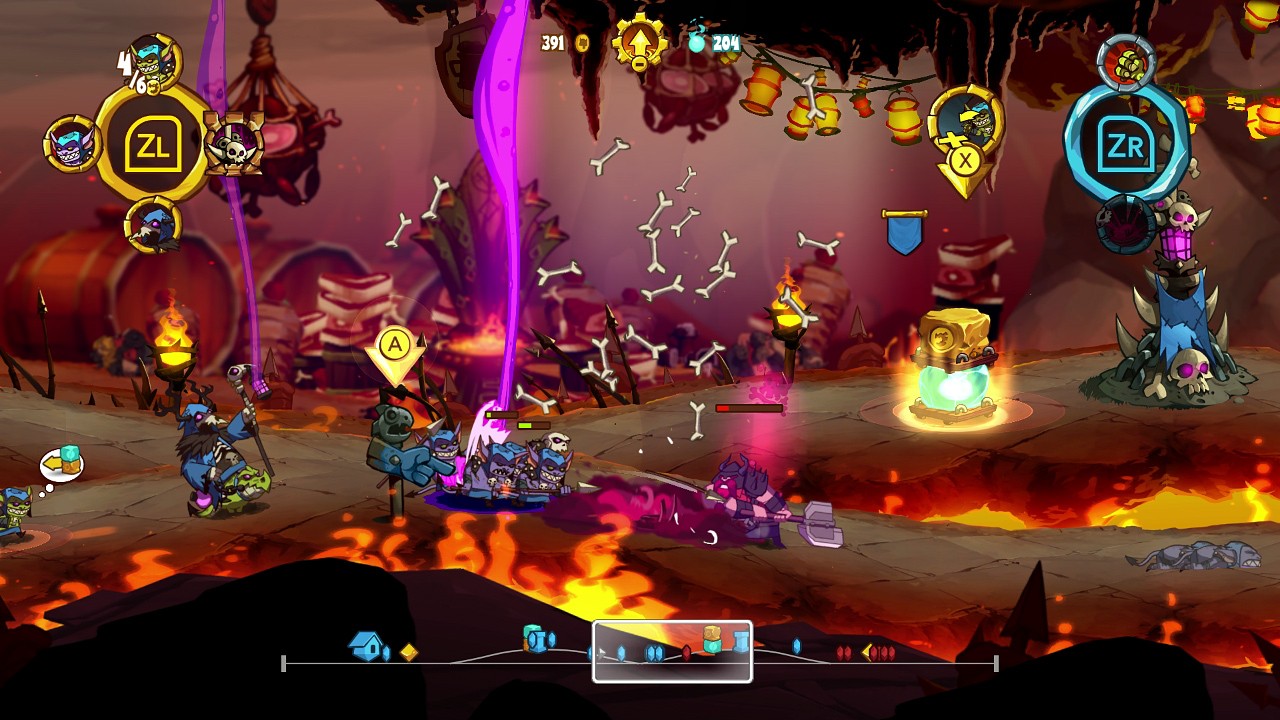 Swords and Soldiers 2: Shawarmaggedon is a 2D side scrolling Real Time Strategy by Ronimo Games, an indie video game studio from the Netherlands. The game came out in 2015 for the Nintendo Wii U and PC. Now, after five years, the game is also released for the Wii U’s follow-up Nintendo Switch, PC and the Playstation 4. Does the Switch version of this sequel deserve a second shot at fame or is this one not worth your time? Let’s find out.

Just like the first game in the series, you’ll play through a few campaign levels with the Viking faction. This way you’ll become familiar with the mechanics of the game; the different units and the quite one-dimensional strategy you need to use. Being a 2D side scrolling RTS, Swords and Soldiers 2 doesn’t look that exciting. But after a few levels you realise that a 2D RTS is a nice spin on the RTS genre and provides a different kind of challenge.

In Swords and Soldiers 2 you begin with a few units and you need to build a base and collect resources to build an army and attack the enemy. However, when you build a combat unit, it will become active immediately and start walking to the right where the enemy base is located. So before you launch a successful attack wave, you need to gather a lot of resources to build a handful of units simultaneously so your strategy has a little impact. This makes the game quite one dimensional and doesn’t give you the sense that you fully control your army. 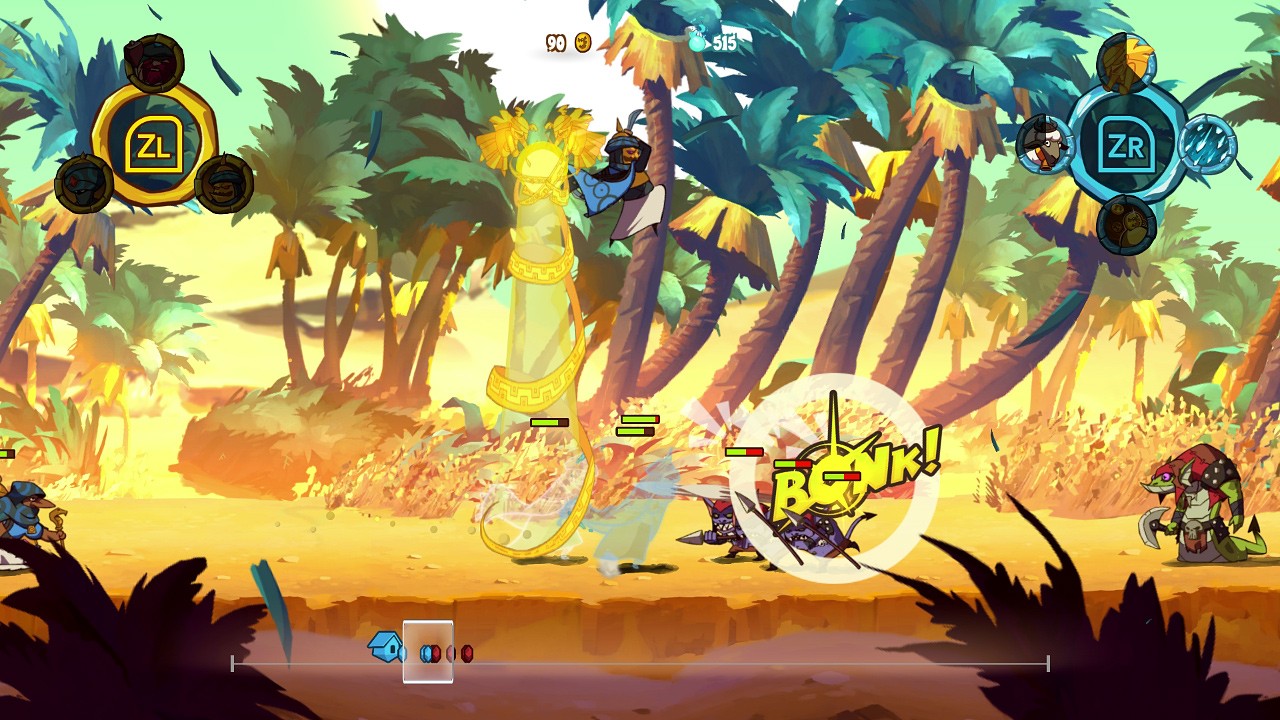 However, it’s also an ideal game to pick up and play for a short burst in handheld mode or on the big screen. To be honest, I really like this simplified approach to the RTS genre and Swords and Soldiers 2 has its own way of delving deeper into its own mechanics. How simplistic they might look, it never feels too easy and delivers a great experience.

Besides the campaign, it’s possible to play the game against your friends or the AI. The game supports local and online play, but the latter one wasn’t that populated at the time of writing. I managed to get a quick online game out of it and it plays fine. Though I can imagine that playing this game in local mode with a friend is one of the best ways to experience Sword and Soldiers 2. However, the game is playable in split screen mode, so a quick battle with your friend only costs you one copy of the game. A huge advantage if you ask me! 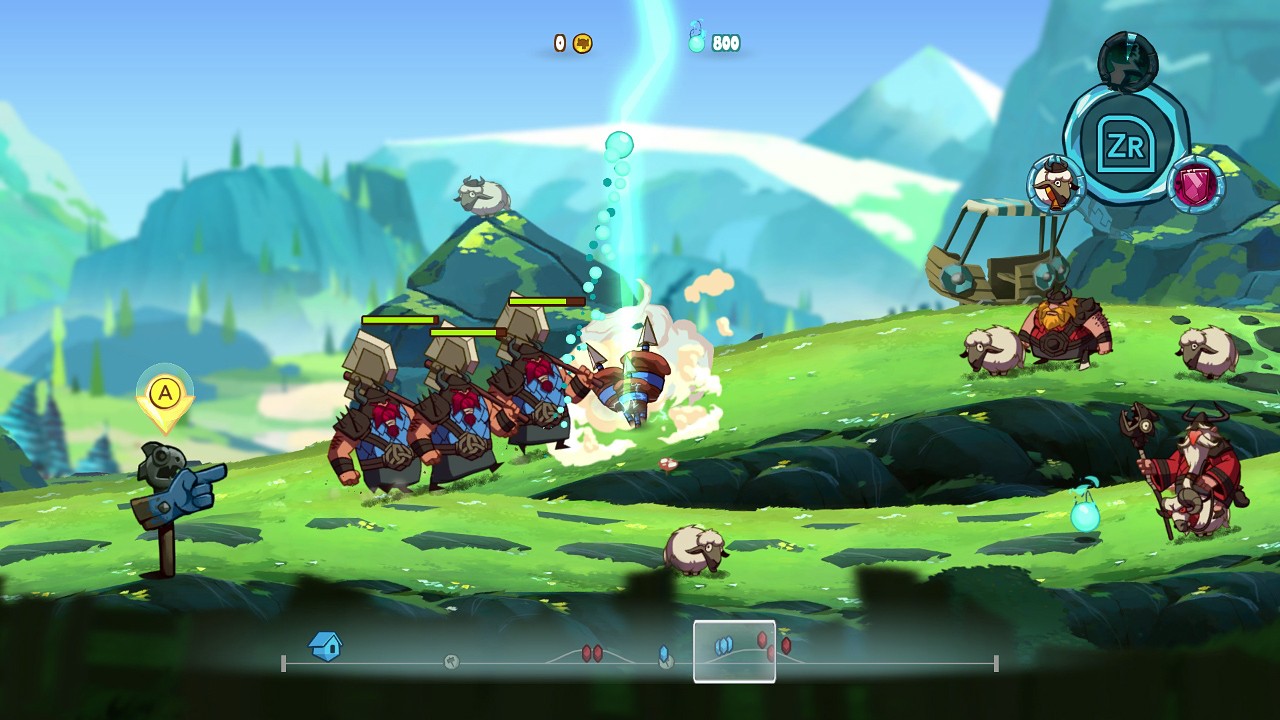 Where this game really shines is the art and music department. The artwork of this game is brilliant, however the animations are a bit cheap and dull. That doesn’t really matter though, because the script of the game is full of little goofs and hilarious jokes. The characters are a bit stereotypical sometimes, but that doesn’t spoil the overall fun. Altogether, this makes Swords and Soldiers 2 a colourful and fun experience you will gladly come back to.

Swords and Soldiers 2: Shawarmaggedon is a nice little game to play in short bursts on the Nintendo Switch. Its 6-8 hour long campaign might be a little on the short side, but the diverse multiplayer options easily compensate for this. Its friendly price tag makes this an easy buy for fans of the first game. Fans of the RTS genre should definitely give this simplified, though charming effort a go.

A nice twist on the RTS genre with a great sense of humor and a multiplayer mode that makes you wanna come back to over and over again.