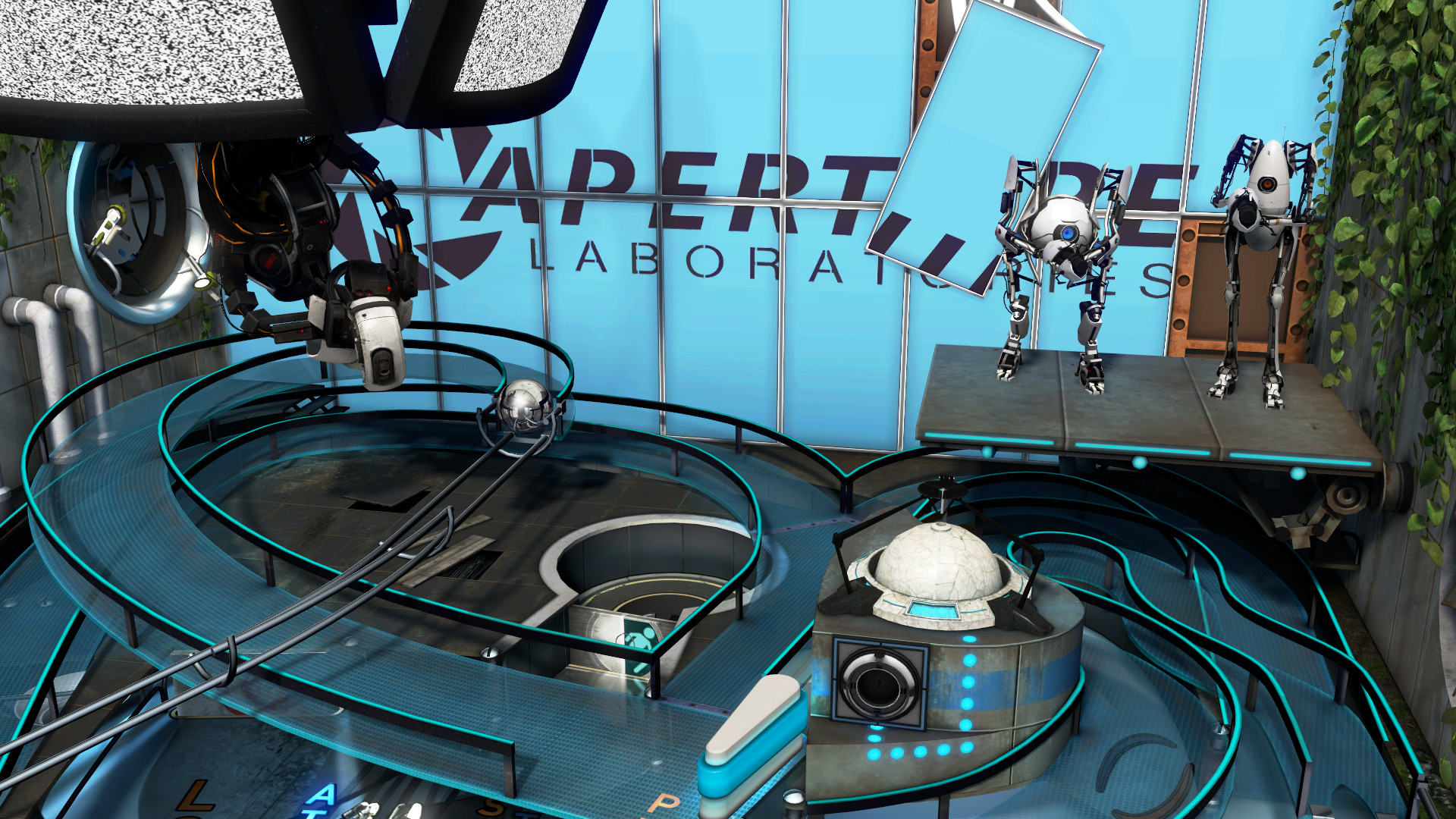 Anyone who’s done any amount of gaming in the past twenty years or so should be familiar with Portal, Valve’s gift to the world to help reinvent what it meant to have a novel concept and execution. The first person puzzle game, which changed the way people thought about snarky AI narration and voiceless protagonists, was a smash hit that garnered a really good (though comparatively worse) sequel and spawned memes that still echo in the halls of web forums to this very day. So it only seemed fitting that Zen would take this amazing IP and do their best to translate it to a successful pinball table. I only say “do their best” because, unfortunately, there are certainly a few things that keep this DLC from being a 100% recommendation.

First and foremost, they really did a great job with creating a table that best captures the elements of the Aperture Science labs where Chell went through rigorous testing that was deemed “inhumanly necessary.” All of the ramps, bumpers and setups feel like they were naturally modeled after the experimental facility, and it doesn’t feel that far of a stretch to imagine the team that Cave Johnson once headed deciding that pinball would be the next leg of their insane and brilliant regiment to discover…something. Probably the effects of prolonged pinball on growing madness. In any case, the color palette and general scheme fits in perfectly with the atmosphere of the game, especially with nods towards the sequel, Portal 2. 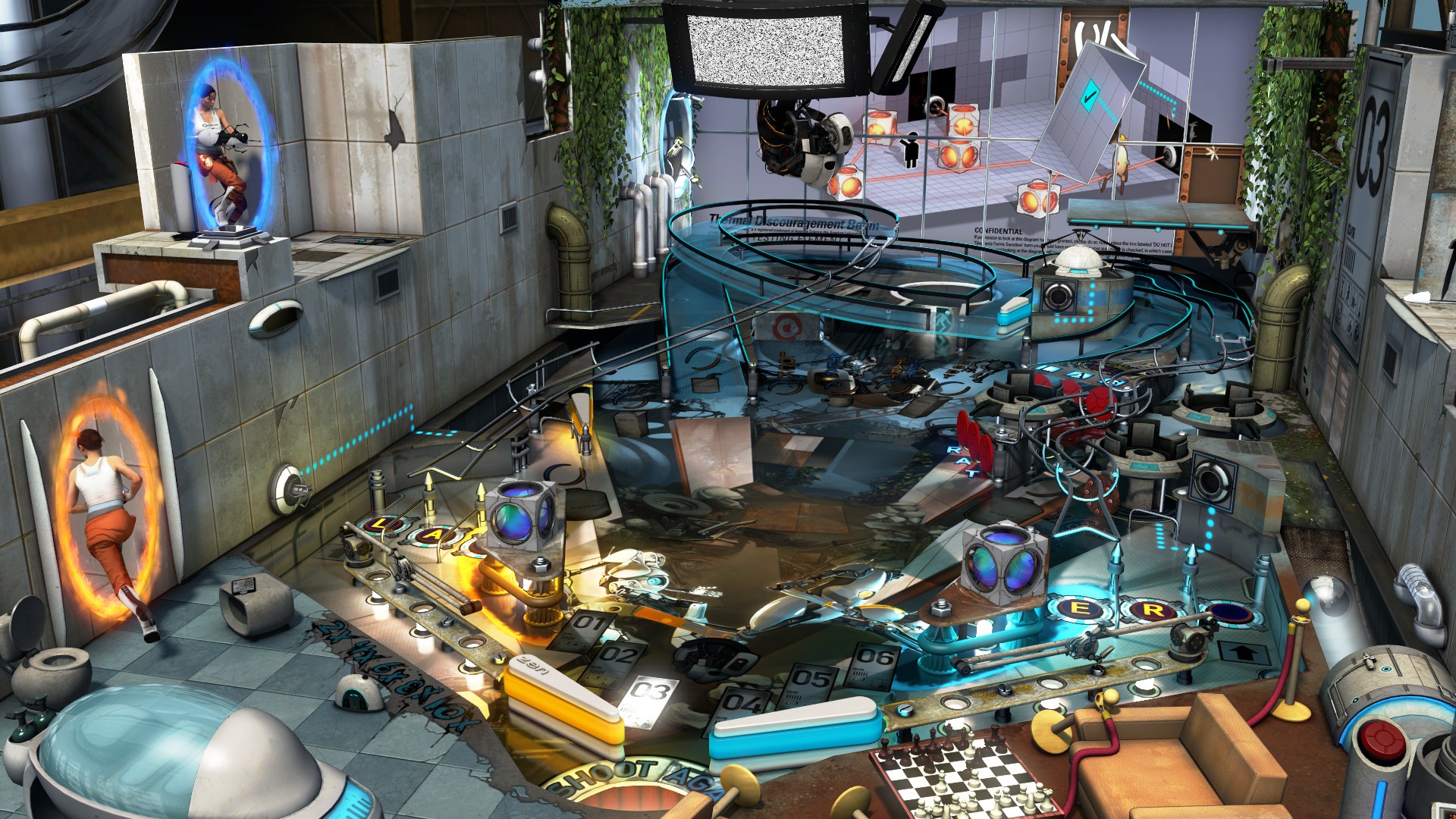 Speaking of Portal 2, players who haven’t played the second one might be a little lost with some of the more nuanced and largescale additions to the table. For one, you aren’t just hearing the voice of GLaDOS, but also Wheatley, the spinoff Personality Core who tries to help liberate Chell in the sequel. Both AI entities talk a lot, but it says leagues about the importance of each in the eyes and mind of the developers as to when they speak. For example, Wheatley acts as kind of a general “catchall” voice that pipes up whenever you hit a bumper, miss a skill shot or activate a ball save (which you’ll do a lot, more on that in a moment). GLaDOS, however, introduces the missions, mocks you during balls lost and gives you the same snarky epitaph every time you get game over. It fits in perfectly with what the AIs mean to the player: one is clearly more powerful, and lords it over in proper accord. Though I feel like it was a missed opportunity to not have some kind of rebuff when you ultimately tilt the table in frustration: I know we shouldn’t reward such behavior, but it was a perfect venue for a quote to condemn you actions.

Now, as for gameplay itself, the Portal table has a really decent setup in terms of replay ability and accessibility. Not only are there are number of missions and side missions that can be activated, but this is one of the best implementations of multi-flippers that I’ve seen yet. Bearing the iconic blue and orange tones that the Portals create, you have your two standard flippers and then an additional two, far-separated set that exist exclusively to line up fantastic shots. You have a real chance to get into GLaDOS’ personal space (to win some missions and also conjure great lines) by lining up the perfect left ramp/right secondary flipper moment, which takes a ton of precision and practice. Even if you don’t get that, there’s plenty of opportunities to make it work in other missions: the main mission station is dead smack in the center of the biggest ramps, and there’s several chargeable bonuses (spell the words, win a prize!) that exist in plenty of nooks and crannies. Basically, if you have the patience and the wherewithal, you’ll make the shot. But it is a matter of patience and trial and error, which doesn’t always make for the most exciting game. 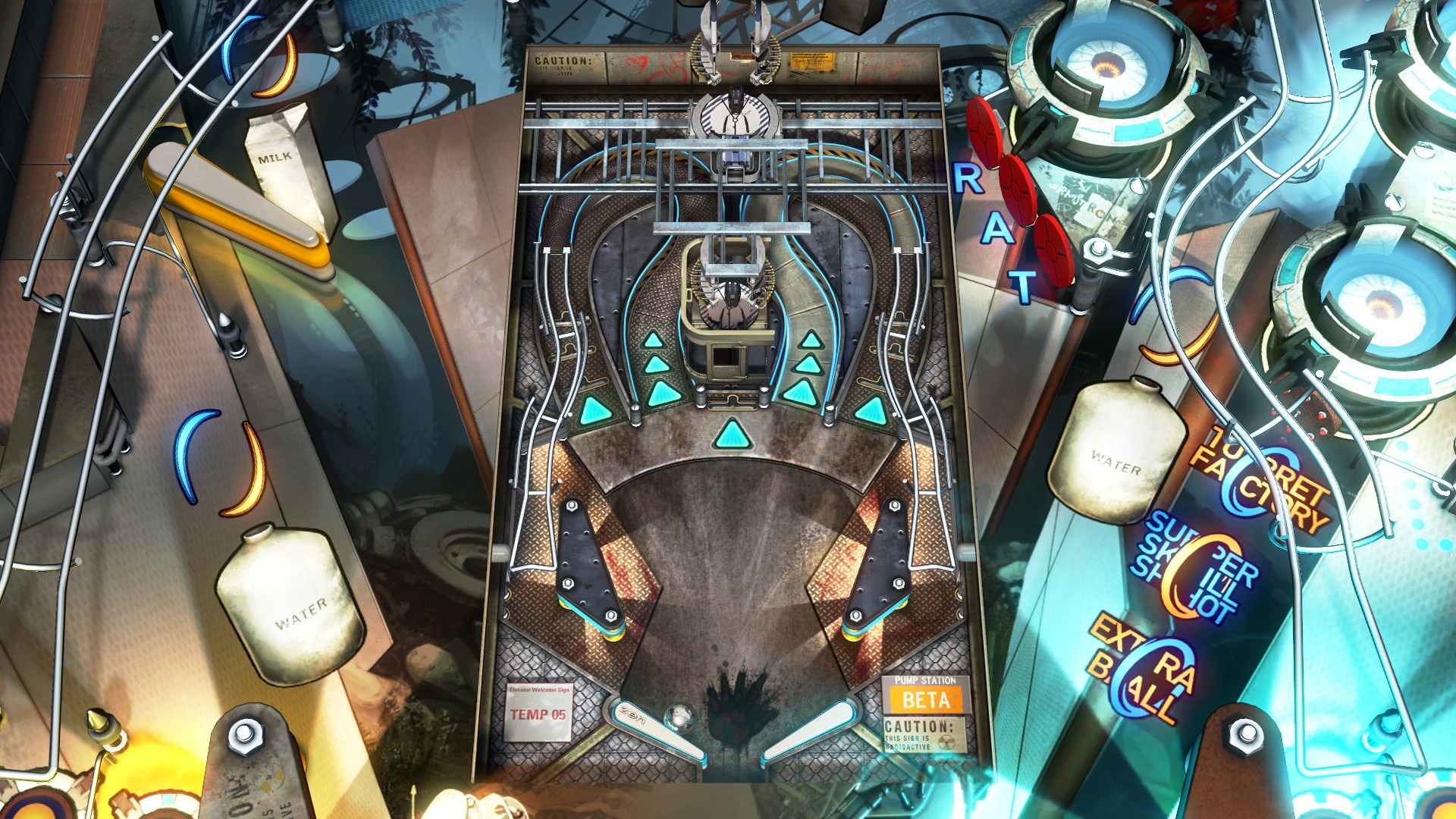 Moreover, the Portal table has plenty of animation and lively action as Chell, the turret droids and GLaDOS herself move about, creating laser fields, portals and general deadly mayhem that you are in no real danger from (as long as you follow the rules). It’s one of the more visually stimulating situations, actually having a ton of action and articulation happening off the main stage, but that’s more for the audience, not for the player. In fact, you’ll find the action that interacts with your ball from the cast of characters is a bit sparse, and this table could have had many, many more opportunities to use Portals as exciting elements in the game. As it stands, only a couple of instances of Portaling happen, and they’re static, meaning you don’t decide where the Portals go. In a game that was all about creative problem solving and using insane physics laws to make things happen, the pinball table is weirdly stifled in terms of strategy. Yes, I know, it’s pinball, but a boy can dream and gripe.

Overall, I wish that Zen had been able to take some of the elements and turn it into two different tables, focusing on the duopoly of the games, but I can understand why they banked on one instead of risking two. However, as a result, casual players and those who are more frugal with their eShop credit may hesitate to drop full price and only get a singular table. While still a fantastically crafted design, only Valveheads and dedicated pinball collectors will be willing to drop automatically. Otherwise, players should choose their games carefully, but keep Portal in mind: it really is a triumph.