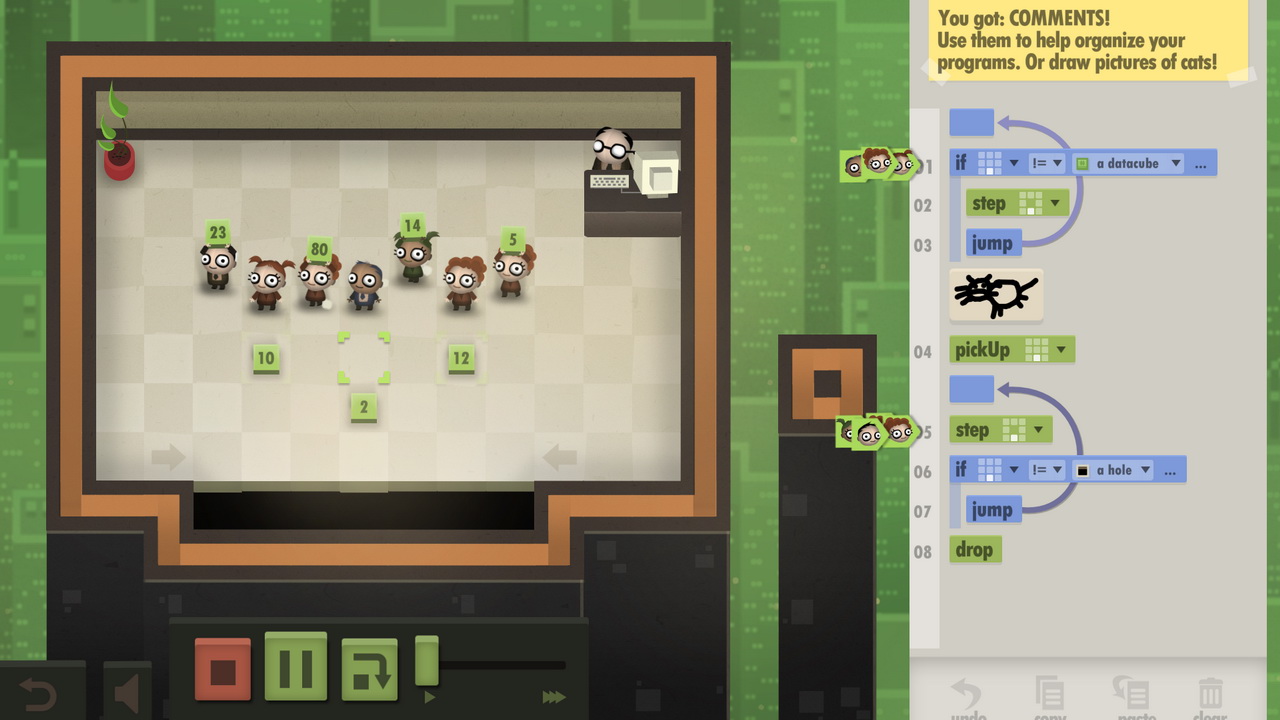 The looming takeover and advent of computers ruling humanity is a tad scary, isn’t it? I mean sure, we joke around and have a generally good time with our automatic vacuum cleaners and drink dispensers, but everyone seems to accept it as fact: the robots are going to rule us. Still, it’s not something we can do without specifically hamstringing our own futures: stop the march of technology and the world stagnates in terms of becoming surprising. So why not just come to accept it and then give it a delightful twist and flair? Perhaps the ruling cyborgs and sentient AI will be kind and benevolent, and treat us as people who deserve our every desire. But, even if that is true, there’ll be a sense of purpose that some people will be missing. And this, in the weirdest interpretation of the apocalypse ever, is the premise of 7 Billion Humans, from Tomorrow Corporation.

In the probably not so distant future, humanity has been given everything it ever dreamed of on a silver platter: energy is infinite, food is unlimited and nourishing, and every single job, from the barista to the President, has been replaced by a logical, competent, and totally flawless robot. They see this as a golden opportunity for humans to now live the life they have always wanted; creating art and music in all sorts of facets without the need to intermix jobs. However…turns out people liked having jobs. Like, kind of a lot. Faced with a strange crisis they could have never imagined, the robots do what they can and give jobs to people. All seven billion of them (hey, it’s the game title!). Working together in the unified office building of the future, humanity now has strangely nonspecific jobs within the robot corporation, and they’ll happily do their tasks, hopefully never stopping to wonder what it is they’re doing or how this will affect things in the future.

7 Billion Humans is a decent follow-up to Tomorrow Corporations last title, Human Resource Machine, and follows a bit of the same logic, just on a much grander and more bizarre scale. Basically, you’re in charge of…well, humans. Humans are so eager to have a job they don’t even care what they’re doing, as long as they’re being told what to do. Throughout the course of the different “phases” of the company (which most certainly doesn’t have a sinister sound to it), your job will be to delegate tasks to groups of humans one command at a time. Starting out with things as simple as moving blocks of numbers an arbitrary sort of direction, things will eventually ramp up to complex execution of seemingly arbitrary tasks that definitely do not extinguish human lives on a grand scale in a complicated manner. Certainly not. 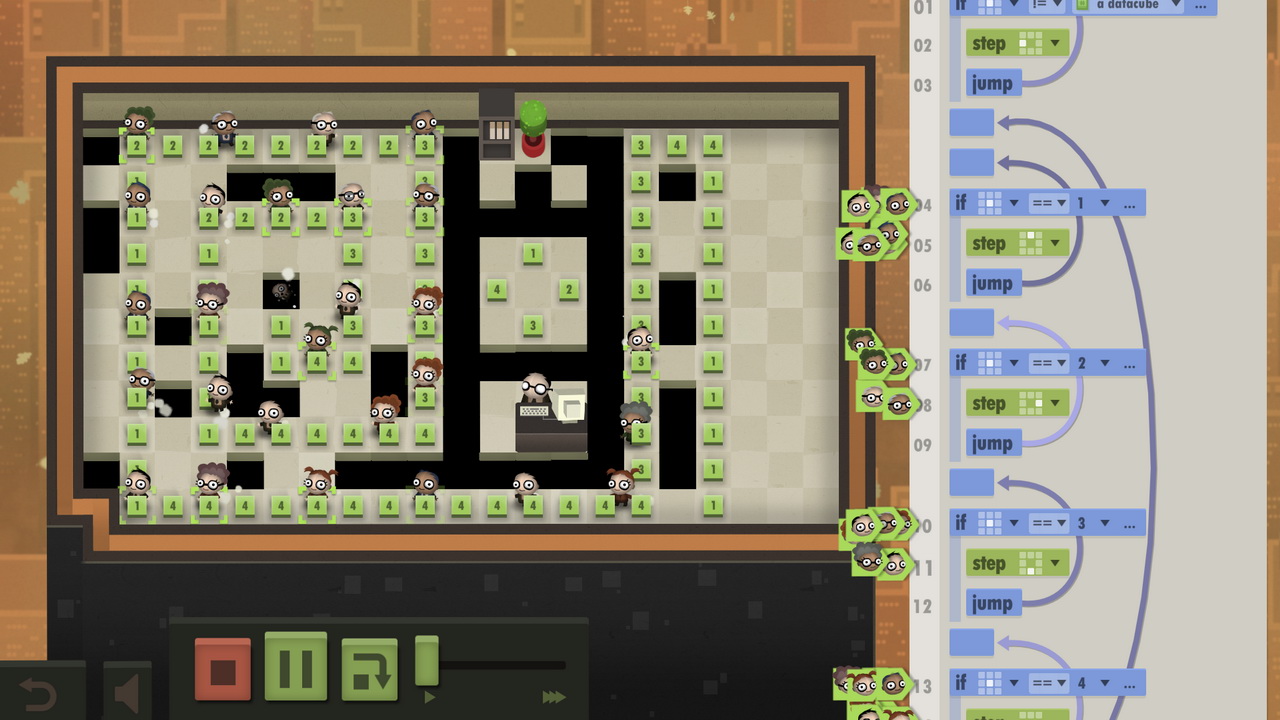 As simple as this all sounds, the crux of 7 Billion Humans is being able to understand code and input direct commands that will correlate to what you want people to do up on the screen. On the one hand, Tomorrow Corporation manages to kill two birds with one stone. Firstly, they sufficiently cash in on a unique way to have their more than slightly odd puzzle game have unique value and execution. Rather than just have some kind of placement of tiles or setting up traps like a white-collar version of Dungeon Keeper, you use the very thing that put them in this mess – command lines – to cause them to move ever closer to what is definitely not the best future that any of them imagined.

Secondly teaching code through indirect methods is incredibly hot right now, especially for children. There’s been no shortage over the past couple of years of toys, smartphone applications and books that teach young people the ideas necessary for them to understand code in the not too distant future. In fact, being able to understand the compilation ideology that goes into this game will really give kids a leg up in the computer science programs that are quickly becoming mainstream.  Even if you don’t have a kid, this is a game that will delight people who love to code in any language or simply enjoy complex mathematical execution; all will find a sort of relief and relaxation in the game. When the code works and everything is placed as it should be, it’s wonderful. When it doesn’t, it’s up to you to “debug” the mess and figure out where things went wrong. 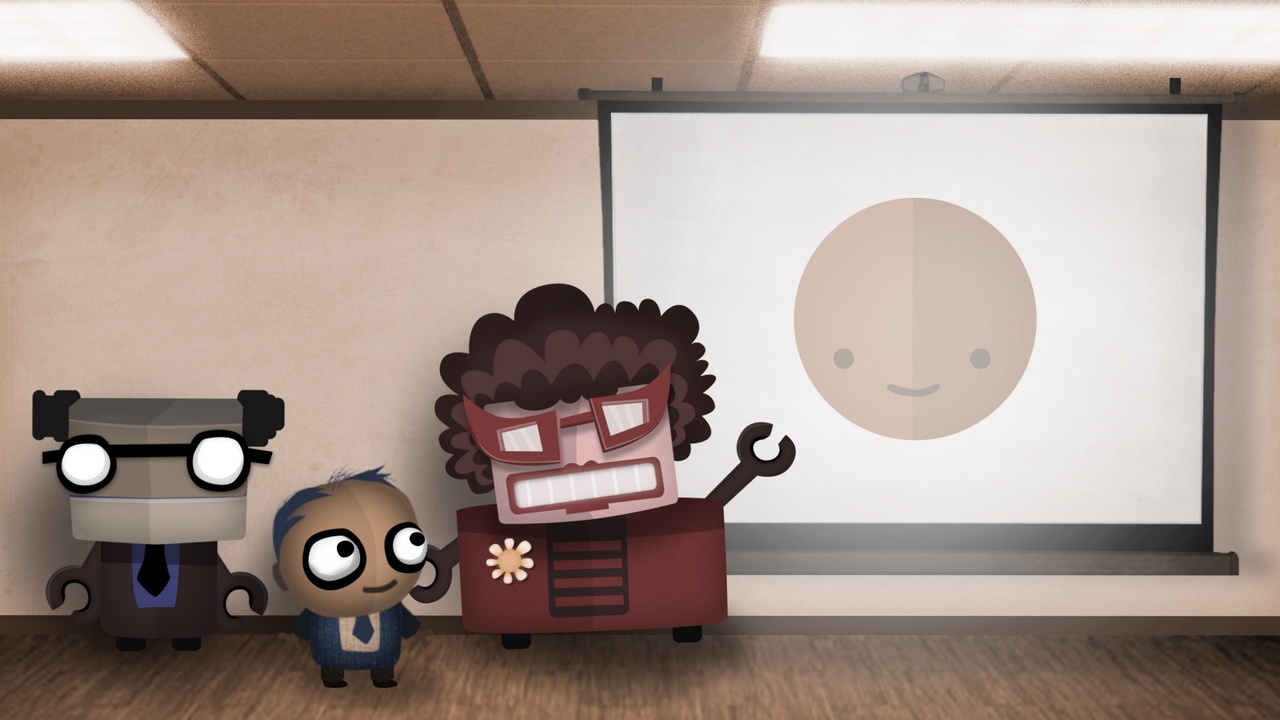 As a result, 7 Billion Humans is not a game for those typically interested in action and adventure, or even any variant of platforming, or even traditional puzzle games. This is something that can become ridiculously frustrating and complicated for players who have a poor sense of logical reasoning in terms of “if/then” ideas; or worse, have trouble working in spatial recognition. It actually took me much longer than I’d care to admit to overcome like the third or fourth year of work, and I eventually got it only with my wife’s help. She proceeded to be my guide throughout the remainder of the play, gently and sometimes directly giving me answers when I had no idea what I was doing. Though I liked Human Resource Machine, I especially liked Little Inferno, which is kind of what I was holding onto in my heart during this play. “Where,” I thought, “is the option to just burn this place to the ground?”

Now, in terms of atmospheric tone, things in 7 Billion Humans are right on par with the other titles of the Tomorrow Corporation. The goofy drawings and slightly cheerful, upbeat music only help to give you the keen sense that something is wrong, everything is wrong, and you should probably be calling for help that’ll never come. Tomorrow Corporation does this fantastic job of painting a dystopia where no one seems to fully understand how screwed they are unless you’re coming from the outside and looking in on frog soup. That’s an element that kept me going in spite of the hard puzzles, which seemed much more comparable to people like my wife, who actually enjoy these kinds of things.

7 Billion Humans is a really standout kind of game, both in terms of presentation and interesting play approach. Tomorrow Corporation refuses to just be a “one kind of games” company, and I do admire their tenacity in making something new and different every time. Yes, it’s hard as hell, and it didn’t keep my attention any longer than I needed to get a full idea of the game, but, as soon as I put down the JoyCons, my wife picked them up and the machine kept running. It just goes to show: robots will make jobs for everyone, regardless if they want them or not.

With a potential audience of 7 billion, it’s no wonder that someone won’t have fun. But I can still appreciate it.