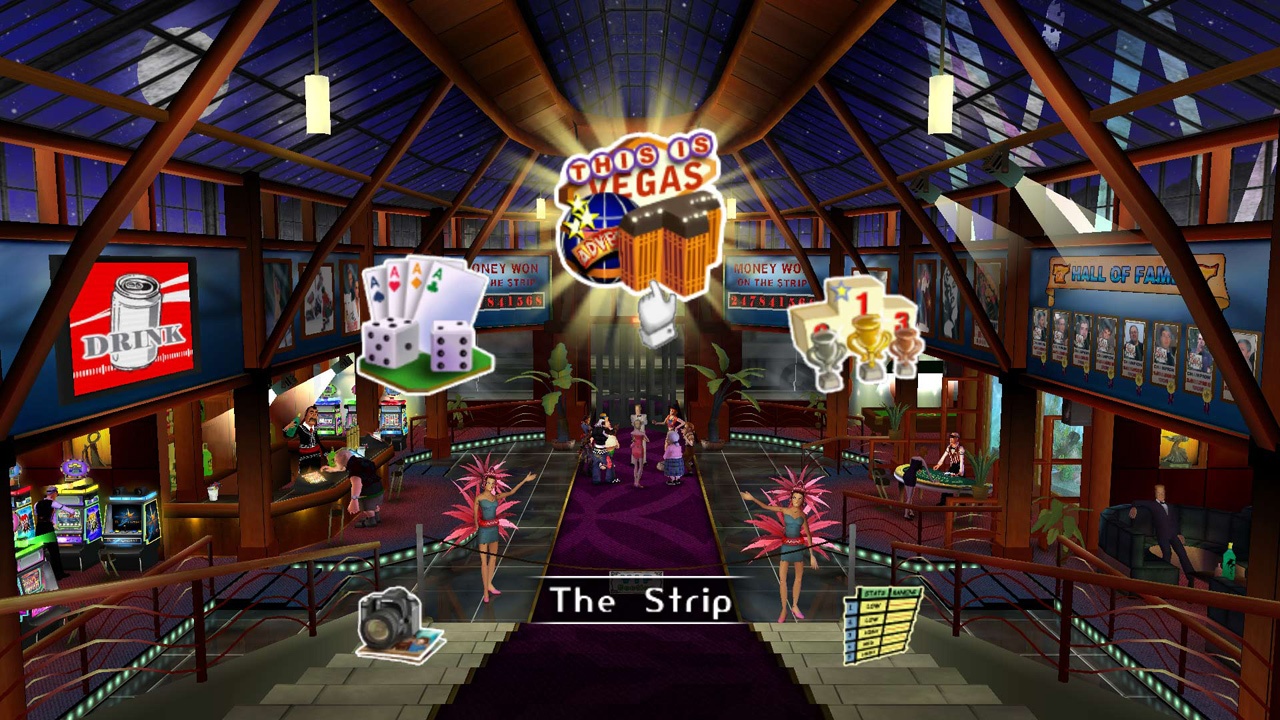 Las Vegas is a city that’s borderline mythical for people around the world. Besides being one of the most well-known gambling dens in North America, it also has this personality and history to it that gives it an oily sheen, a glitzy appeal that is also saturated in whispers and darkness. Sure, Vegas today might not have the same danger that it did back in the 60s or 40s, but it still maintains a high level of excitement, promise, and that unhinged feeling of maybe being able to strike it big and change your life. It’s full of hope, despair, heartbreak and wonder, and it’s definitely a place worth visiting at least once. Some people make yearly pilgrimages, pockets full of money that’s just waiting to disappear in the thrill of “what if.”

So how about we boil all that down to a bunch of terrible stereotypes, forced gameplay and pointless random events?

Vegas Party is a board-game style approach to the Sin City world, where up to four players can try and strike it big in Vegas and become the top winner in terms of cash on hand. You win tokens and money through a lot of stuff, including ten different gambling games that all focus on maximizing your wins in the most limited amount of time possible. From blackjack to bingo, there’s a bit of something for everyone. You also have a wide variety of events on the game board, some lucky and helpful, some damaging and downright evil, and all exist to try and prologue the experience. This is in spite of the average player, by turn three, wanting desperately to either go to Vegas and actually do something or turning off the Switch and vowing to never visit Nevada ever again. 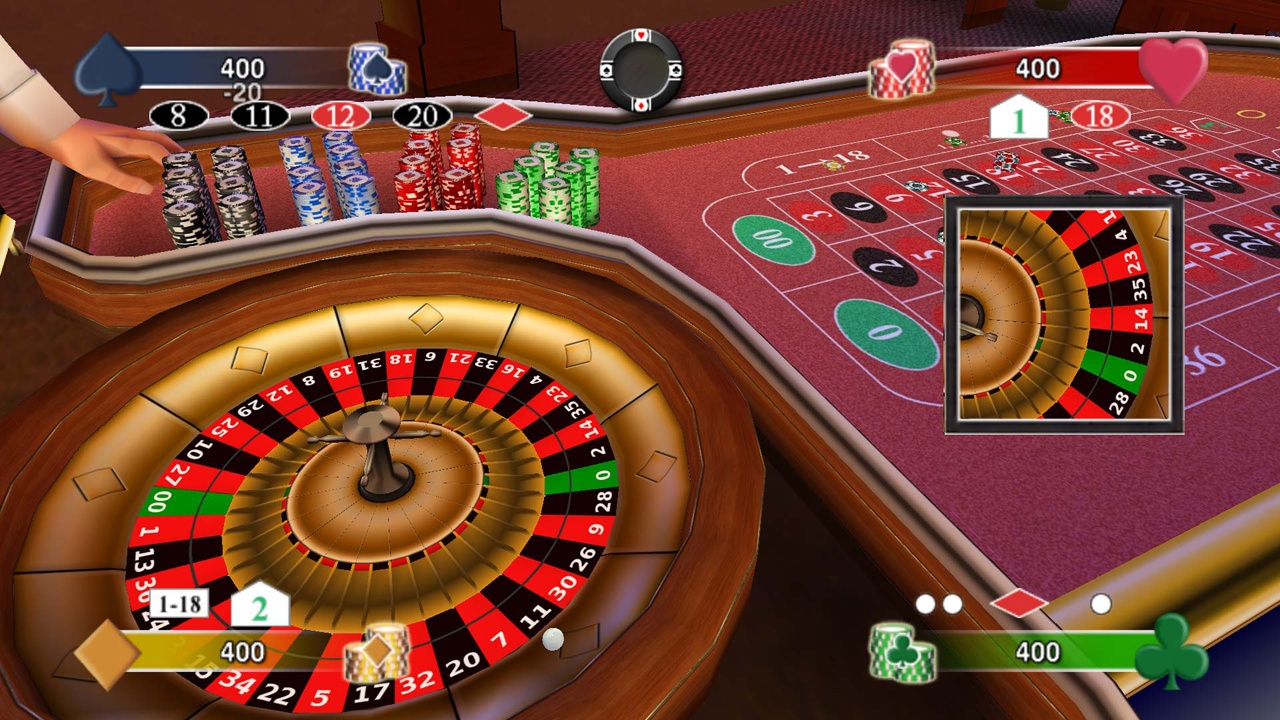 For what the game does right, Vegas Party manages to capture Las Vegas in the same capacity you’d imagine an incredibly benign office party. There’s a few streamers, maybe a roulette table where you can bet “office bux” to win a new mousepad, and everyone standing around and chatting, drinking distinctly non-alcoholic punch. Maybe there’s one older woman who came in a black dress and pearls that’s more Gatsby than Vegas but it’s still a nice touch. Then Keith down in sales yells “Vegas Baby! To try and instill some kind of vibe and everyone just awkwardly chuckles. That’s the kind of level that you get from Vegas Party. Most of the game is spent moving around a board, landing on spaces that capture the brochure for Vegas (lose money seeing Cecil Dion! Get abducted by aliens!) and waiting patiently for someone else to do something. Naturally, I wouldn’t expect hookers, angry pit bosses and a sobbing mess of a man who just gambled away his mortgage to be a normal part of the game, but I was basically expecting something…more Vegas.

To help break up the board game, there are occasionally casino events, where the player who lands on the event can enter a mockup of a famous building (name sort of changed) and pick one of three games to play. Awesome, right? Well, depends on the game. See, for the long form gambling games, you gotta change things up a bit to make it more speed friendly. So you only get three hands of blackjack, and you aren’t allowed to split, only hit, double down or stand. The video poker game lets you raise or fold and just cross your fingers (similar to real video poker, but that doesn’t make it better). Darts takes a goddamn eternity to play because of the motion controls (more on that in a moment). And bingo doesn’t even make any sense: three balls at a time roll across the screen, and you gotta be the first to click them to try and fill up your board. Not even make a bingo, actually fill your 3×3 card entirely. I get that some allocations needed to be made, but when you have a game that doesn’t even feel like the original, why not remove it or try something else? At least roulette is spot on in that I lost all my tokens and never knew what I was doing. Kudos for that.

But yea, motion controls. Vegas Party is entirely reliant on motion controls, and everyone is worse off for it. On paper, it seems like a fun concept by connecting physical motions (hurling darts, rolling dice, etc.) to the JoyCons. Yet, for reasons I can’t figure out, all the motions are tethered to the left JoyCon, aka the one without the confirming buttons. So even something like the roll of the dice feels utterly bizarre, as you shake your hand wildly, generating very, very little movement (compared to the dice shakes from Mario Party games) and then push A to finally release, resulting in the die just dropping, like deadweight, onto the board. Throwing darts is odd because you carefully line up the shot, press A, and then are held hostage by a bizarre figure eight pattern that you can guesstimate as to where it’ll be when you finally make the throwing gesture. Even just simple navigation is odd, because the movement feels more like a floating mouse cursor than real motion controls, resulting in awkward pointing like you’re using the Light Gun from the NES to choose everything. I wished time and again I could just use arrows to do more than select options, especially because, if you don’t hold your wrist stock still, the arrow selection goes out the door and motion controls take hold. 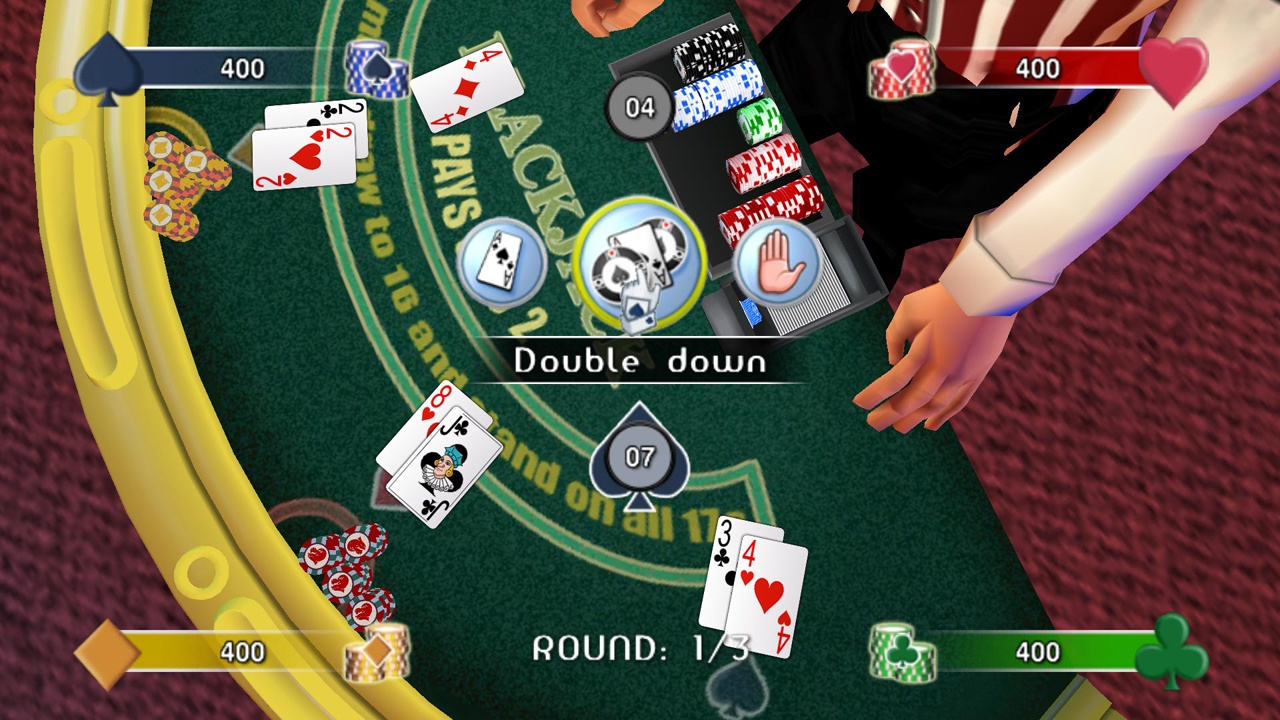 Lastly, the graphics are just insultingly bad. Each “character” you can select is a rather ugly version of a stereotype, and I don’t even mean Vegas stereotype. You’ve got super fat and awkward tourist, nerdy dude with suspenders and glasses, cowgirl with the short shorts, granny complete with grey bun and a big black dude with gold chains and shades. Each character prances around the board like it’s their first day on Earth, much less in Vegas, but that doesn’t even make much of a difference. When I think Vegas, I think flash and pizzazz and just this overwhelming sensation of “wow” to permeate throughout. The SNES title Vegas Stakes did this wonderfully with fake casinos but real atmosphere, even when the game itself was just a static forefront of a gambling simulator. I don’t understand how Vegas Party gets a 12+ rating when the most offensive thing about it is the concept of Vegas and how far from it the whole game plays. Nothing jumps out here as scandalous or exotic or even fun. It’s just a bland, textbook imagining of Las Vegas as concocted by someone who is vaguely aware of what goes on there, has never seen a single picture and also cannot process ideas that are higher than PG.

Between the long turn load times, the gimped mini games and the lack of customization, settings or really any kind of interaction, Vegas Party is just such a disappointment from the word go. If the game could be polished up to load better, have the motion controls balanced or fine tuned and maybe let players make their own character, this could be a decent little board game. As it stands, if this is what I thought Vegas was like, I would probably stick to Atlantic City. At least my disappointment is on part with the promises there.