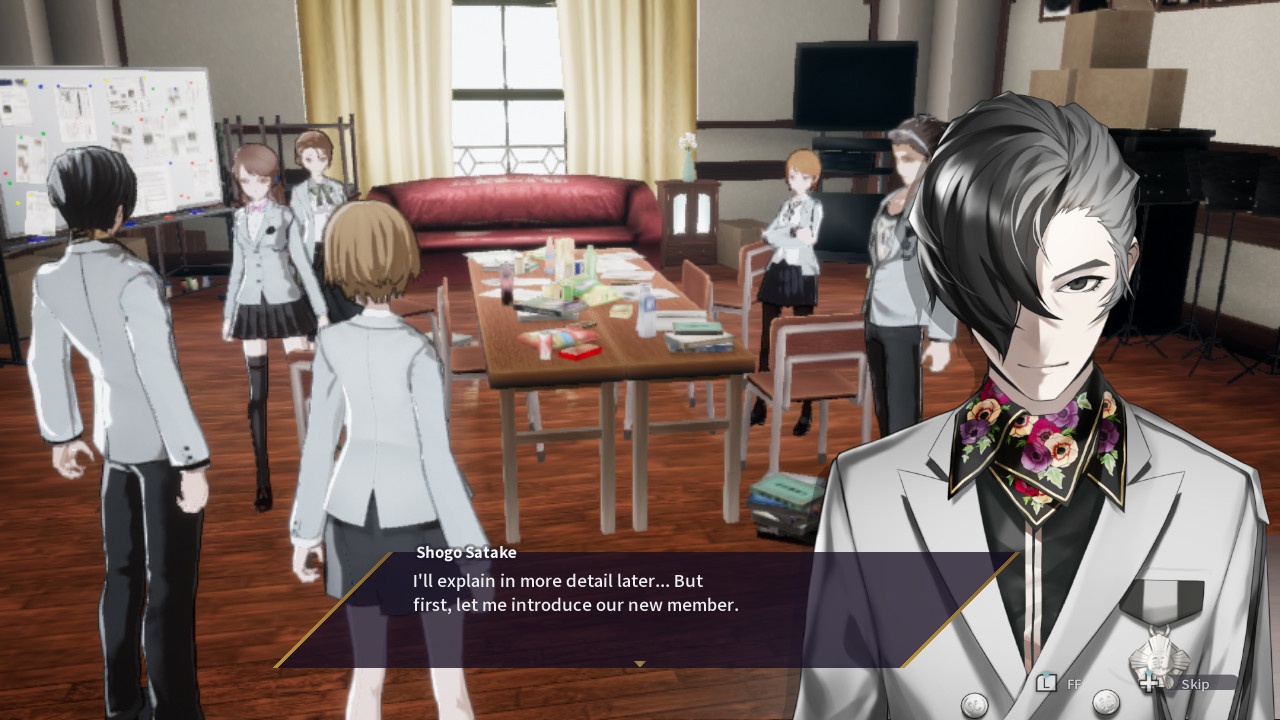 The Caligula Effect: Overdose should be the poster child for the B side of the Nintendo Switch. I think the old stereotype of Nintendo only being for kids and for playing around with childish titles has finally been bucked, but it’s still something that people don’t totally understand in terms of how far it’s come and what it does. I don’t mean something pornographic and overly adult: there have already been a few questionable titles that really straddle that line. I mean the ability to finally get software that reaches out to fans and the loyalists who strive for very specific kinds of gaming. Hell, one of the main designers of the game is the genius behind some of the early Persona games, so that alone should make you sit up and pay attention. Caligula Effect is one of the best titles that I can point to, for Western fans, and say “look, there was some crazy stuff happening on the Vita, and no one really seemed to care, but here it is.” And, even though the Overdose Edition isn’t exclusive to the Switch (it was released on the PS4 some months ago), it’s still the definitive edition of one of the more fascinating JRPGs that I’ve played.

Firstly, I adore the storyline, so that needs to be held in a clear, spotlit area. You play a student who has apparently dealt with so much disappointment and sadness in the real world that you’ve retreated to Mobius, a virtual world where the inhabitants are stuck in a permanent holding pattern of high school life. Even when you “graduate,” you simply revert back to a first year, and that’s all good with everyone for some reason. Strangely, you have now developed a keen sense of awareness that this is all kind of screwed up, and that makes you a target for the players who want to simply live out eternity in a utopian city that provides their every whim. You are able to quickly find kindred spirits of other students who can’t remember why they entered Mobius in the first place, but they need to escape. The ruling entity, a digital diva named μ (pronounced Myu), isn’t willing to let you leave, so you need to seek out the Ostinato Musicians – other students who’ve ascended to ruling roles in this pop landscape – and defeat them to turn the tide and potentially find a way home.

The story is even more complex than that once you really unpack it. Firstly, there’s this undercurrent of Vocaloid satire and a bit of social commentary on how many of the Japanese youth retreat into online worlds, often heralded by these AI spokespeople, and just never seem to come out. μ is clearly a nod to Hatsune Miku, who started part of this craze so many years ago. Every one of the Ostinato Musicians represent a different sort of music and trend that’s happening/happened in Japan, from the idols and the Lolitas to the punks and the Yankiis. Even the group of people that you find – the Go-Home Club – is a play on the high school layabouts who stun society and their families by not finding a school club to dedicate their every waking moment to. If you’ve spent any time watching slice of life anime or actually spent time in Japan as more than a simple tourist, you can recognize and appreciate the details that went into the design of this game. It’s like Akiba Strip (which hopefully will also get a Switch release date) with a bit more pomp and pizzazz to it (and fewer nude vampires). 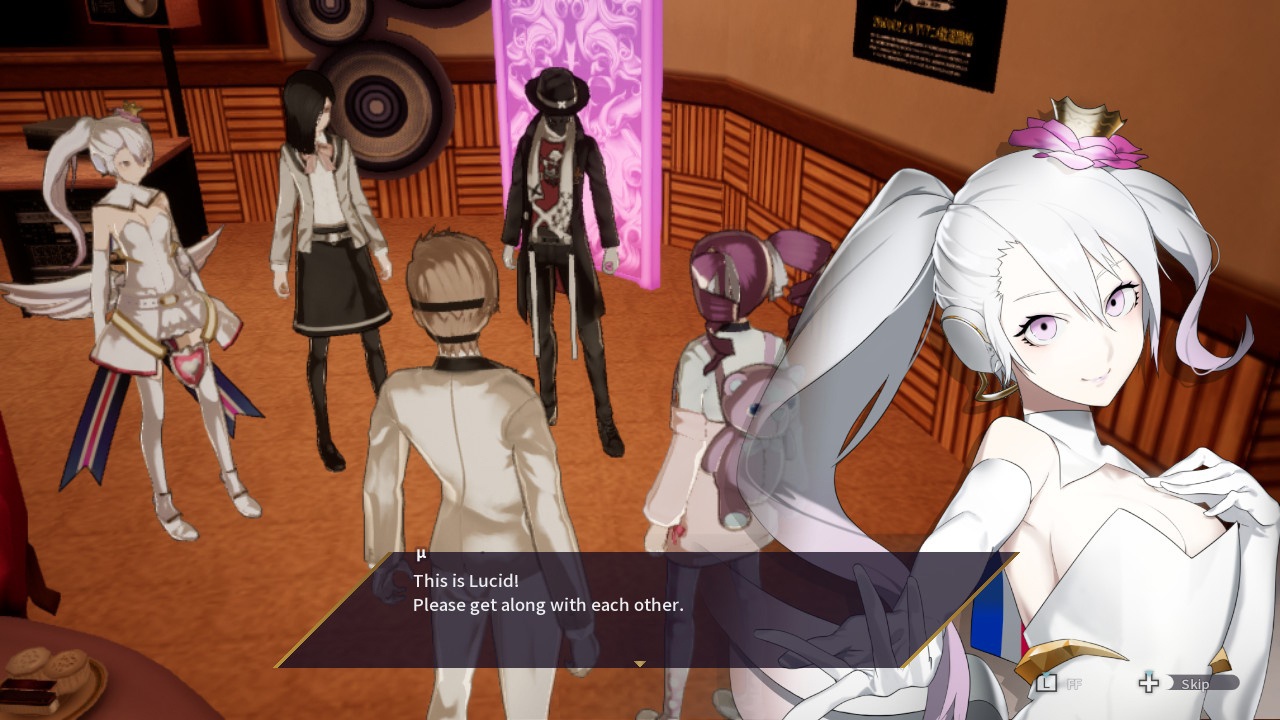 The combat of Caligula Effect is turn based, but not in the way that you think. This feels way more like a strategic planning than just simply choosing what kind of attack you use. As you decide which each member of your party will do, you’ll get a preview, based on future sight probability, of what might happen when these commands are executed. It’s simply fascinating and gives players the chance to plan out things in a truly spectacular method, seeing how a player could launch an opponent into the air, have a second party member riddle them with bullets as they fly through the sky, and have a third character then slam them back down to earth for an unbelievable amount of damage. Of course, the more variables you introduce (multiple attacks from one player, a terrific amount of movement), the higher the chance that things could miss or go awry, so you need to use your planning carefully. It could take a couple minutes to fully flesh out everything, but that makes it so much more satisfying when everything goes off without a hitch and you exit battle with a bunch of new ability points (to up your skills) and new equipment. I adore being able to not just mash buttons manically and hope for the best, but, instead, to be able to chronically be the right thorn in the side of the enemy (heh, Thorn), and hamstring them from getting out any real damage.

Additionally, like the Persona series, Caligula Effect puts a large amount of investment in being able to communicate with NPCS throughout the game and to foster relationships. You have an entire chat system (called WIRE, in parody of LINE), to keep up communication with the staggering number of students that you encounter throughout the game. You can talk to them face-to-face in order to build up relationships and trust, and getting friendly with some people will help you reach out to others who might otherwise have ignored you. These building relationships open up more side quests, which, in turn, help to create actual personalities for the NPCS (and there are seriously like 500 or so, so you can do this for MONTHS). It also gives you the opportunity to overdose on passive skills, so if you’re the type of person who likes to own boss fights like you’ve got a Game Genie plugged in, this is the way to do it. Be warned, however: you’ll never get the full sort of reveal like you do with the main characters. While the darkness that lead the protagonist, the Go-Home Members, and the Musicians might come to light in stark and sometimes uncomfortable detail, the NPCs will always be rather static and generic. Don’t get your hopes up, but also don’t be dissuaded from helping them if that’s your jam. 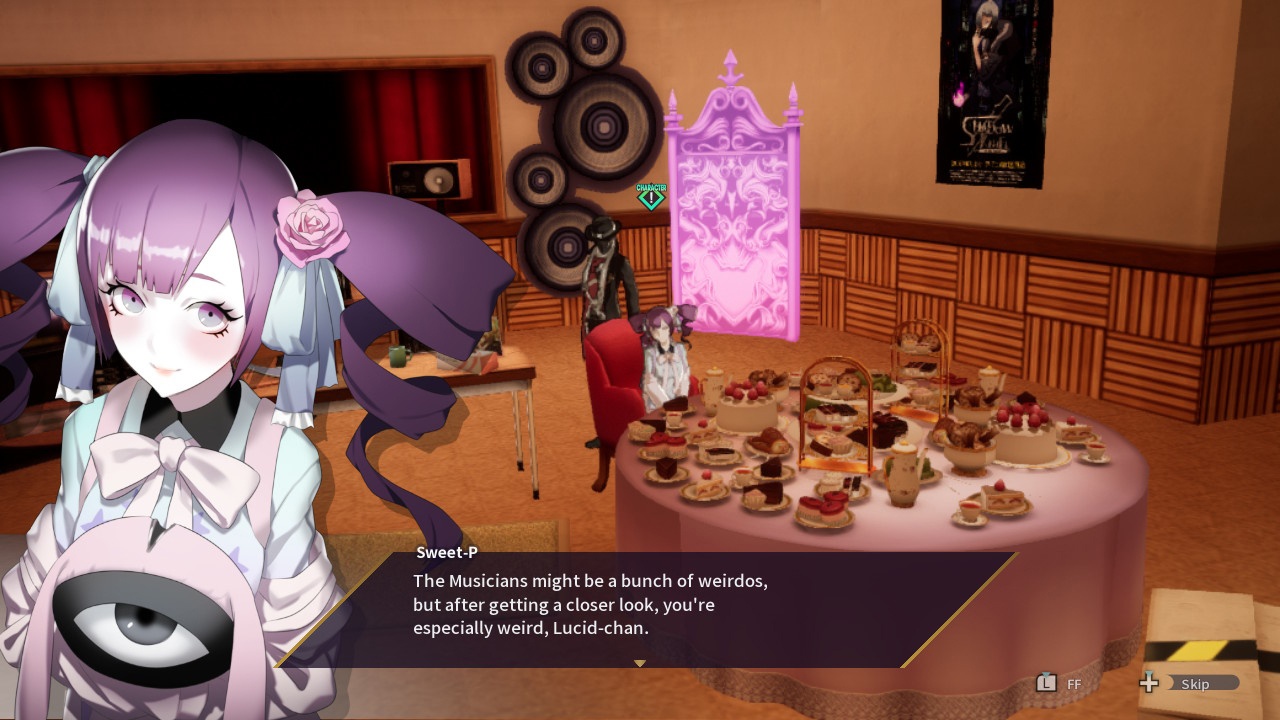 The Overdose edition of Caligula Effect also takes the core game and ratchets it up in several important ways that anyone who missed the vanilla Vita version might not know, but it’s super exciting to know they exist. Firstly, inclusion of being a female protagonist. Seriously, that wasn’t an option before, and it didn’t make any sense, since women can be crushingly disappointed by the world, too. Secondly, a ton of inclusion of extra characters to add to your party (more on that in a moment), including the Ostinato Musicians themselves (in post-game, but still, cool). Additionally, there’s an entire side version of the game, the Forbidden Musician Route, which could take up a review all on its own, but I’ll try and boil it down as best I can. It’s this awesome situation that was created where you take on the mantle of an Ostinato Musician yourself, acting as an antagonist to work and take down the Go-Home Club. I’ll be perfectly honest: I prefer being the bad guy, and this fulfills that dream to a big degree. You have the same sort of combat and engagement expectations, but you do it from the other side of the screen and have a whole different perspective on Mobius, Ari, μ and the rebellious youths who want to disrupt the perfect world. It effectively doubles the length of the game, but it basically feels like a whole new game. This is a real Innocent Sin/Eternal Punishment situation, and it’s included in a singular package that also has been optimized to run on the Switch AND a vast majority of the screen-clogging text during battle has been removed. It’s so damn glorious.

The only fault I really had with Caligula Effect is that the scaling difficulty is something that doesn’t reward or punish players, only just sits in place with their preferred gaming style. If you’re seriously interested in the storyline exclusively, you can put it on easy, brute force through the fights and the bosses, and call it a day as you watch the madness unfold. You’ll get the same number of endings, equipment, outfits and more for keeping it easy. Conversely, being able to master the battle system and rocking out on hard doesn’t net you extra bells or whistles, but only lets you know that you did a damn good job of fighting the Digiheads (students who’ve been corrupted and turned into attacking NPCs). So why the hell would you want to even think about going onto hard mode? I guess if that’s how you enjoy your games, fair enough, but I don’t see the point. Then again, I had to get through this in a couple of weeks to make embargo, so you see where I got tripped up.

Caligula Effect: Overdose was a treat through and through. It was well written and action driven, offered plenty of variety and side roads to keep me excited, and was much lower on fan service than the trailer would make you believe. It was compelling, and helped me contemplate a bit more about the views of the shut ins that grow in number by the days in Japan (first Yume Nikki then this, the Switch is really trying to find people). If you’re a Persona fan and playing as Joker on Smash isn’t going to cut it, this really scratches the itch without providing Jack Frost. Highly, highly recommended.

Take equal parts fear of the real world and fear of the digital frontier, mix well, add a dash of Vocaloid and top liberally with combat and relationships.