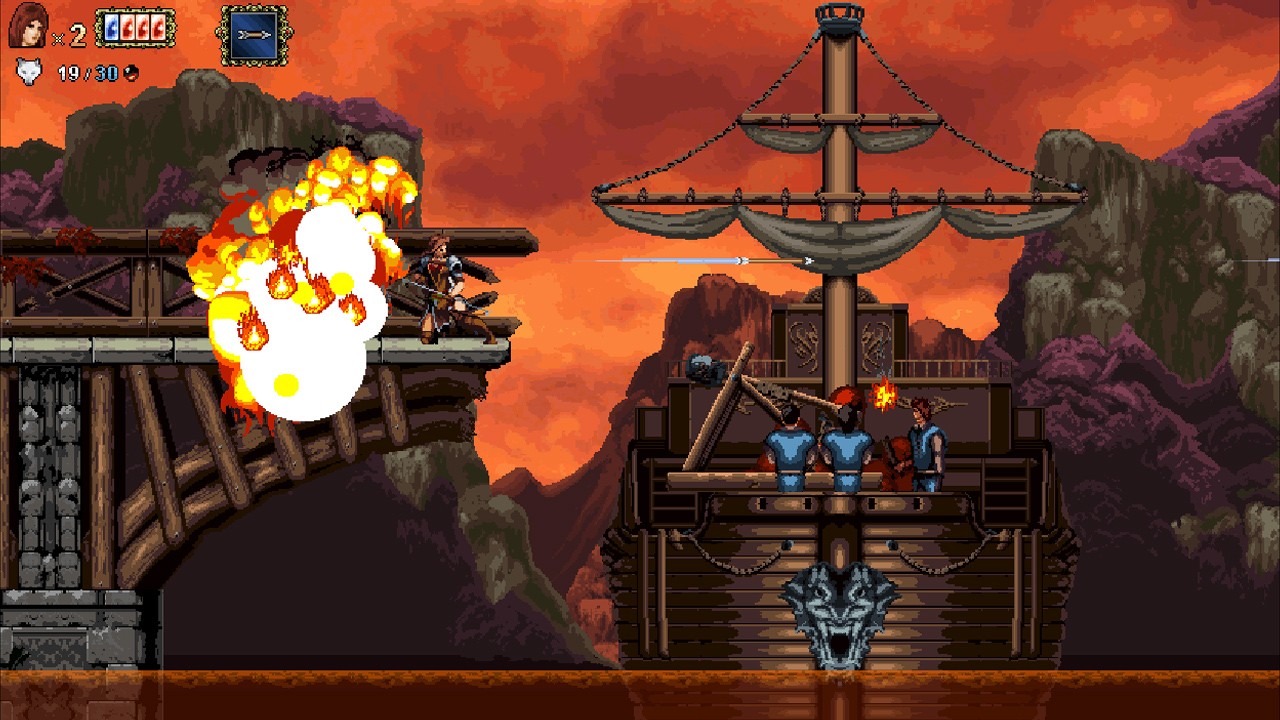 It’s important to know exactly what you’re in for when it comes to some types of games. For meta and hyper strangeness experiences such as Icey and Pony Island, less is more and the fun and enjoyment comes from the reveal. For others, though, it sincerely helps to make the road map clear. Take, for example, Brutal Legend. Many critics absolutely loved the first half of the game and totally panned the second half when it changed gears into a sort of tower defence module. So when you see a title like Wallachia: Reign of Dracula on your plate, know what it is. Many of us have been playing Hades recently, and it’s certainly nowhere near that level of design. Additionally, you might notice that there are unlockable features that contain Bloodstained crossover material: this game is also not Bloodstained. Instead, players should be ready for a retro style, side scrolling action game that feels like it was lifted right out of the end part of the Sega Genesis lifespan, and, taking that into account, it’s a damn fun time.

For those unaware, Wallachia: Reign of Dracula is the classic tale of the would-be vampire slayer looking to take on the infamous Vlad Dracul himself and free the town of Wallachia from his tyrannical, demonic grasp once and for all. Instead of stepping into the shoes of many famous hunters (the Belmonts, the Van Helsings, etc.) you become Elcin Floarea, sworn defender and dedicated fighter against the forces of darkness. She will be aided by a small cast of characters, including Vlad’s own brother, to help end his reign once and for all. It’s a classic tale of good versus evil, and all the exposition in the world won’t change the fact that you’re charging into the heart of darkness, fighting demons and possessed soldiers to kill a vampire.

Wallachia: Reign of Dracula is old school in design and portrayal, and also carries some of that ideology in the gameplay as well. As a side-scroller that feels like it would have been cutting edge in the 90s, the name of the game is survival. Elcin has her standard melee attack with sword and quick footwork, and a bow that she can produce, nock and fire off in less than a half second. She also gets some good upgrades to everything, including different types of arrows (for faster or shorter targets), fireballs, and even the chance to summon a goddamn wolf spirit to destroy everything in her path. Elcin will tap into the mystic arts further with charged shots and eventually having this sort of fire curtain that you can activate to both hit all targets on screen and also to banish would-be projectiles flying at you. Everything outside of the standard sword and arrow do have limited ammunition, though, and you need to constantly kill the waves of enemies appearing from everywhere to pick up refills of both arrows and magic spheres to keep the music going. 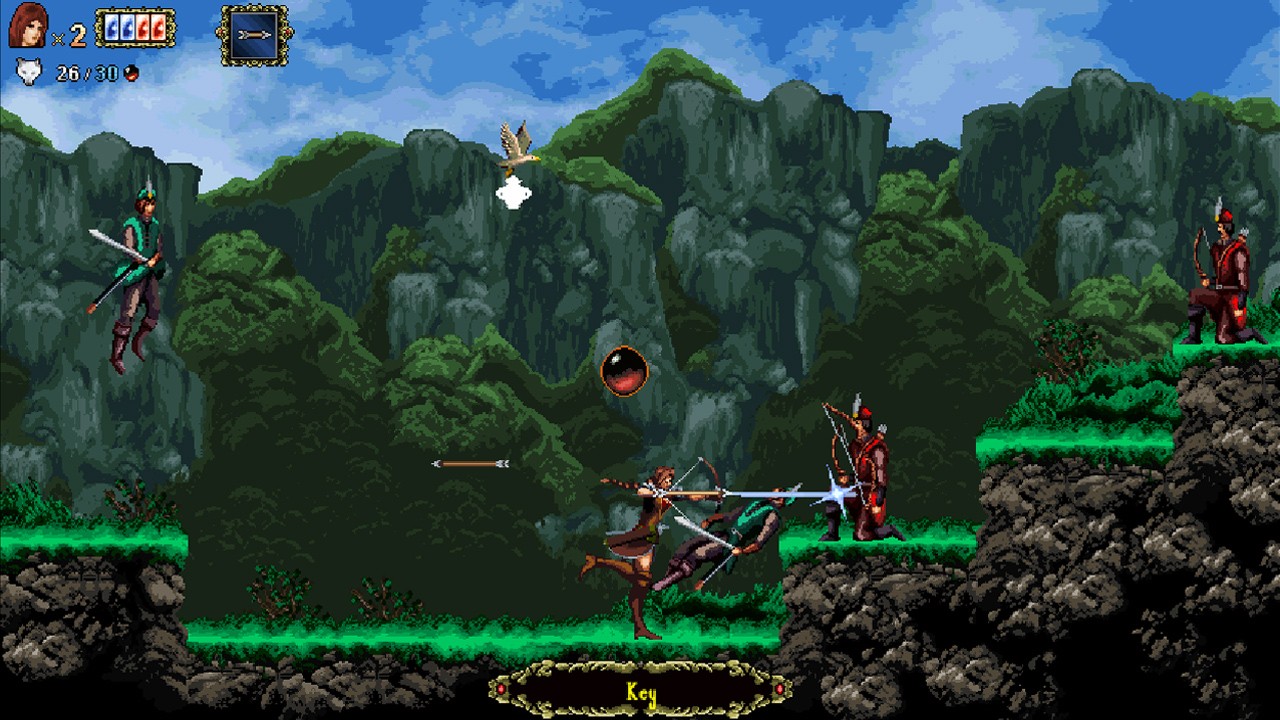 Strictly in terms of gameplay, players who’ve lived through the console wars of the Nintendo Vs Sega days will feel right at home with Wallachia: Reign of Dracula. There’s a constantly increasing points system that means nothing to anyone except you and your own imagination. You can just keep grinding enemies if you want to because they will relentlessly spawn in some areas. You need to keep an eye out for birds flying with power-ups in the sky and random, unassuming objects that can break apart in order to bestow speed and sword upgrades, so you might as well just keep up the destruction any way that you can. As long as you’re sticking to your standard weapons, you won’t run out of anything, but the one item that doesn’t drop often is healing salves, so you gotta keep your head in the game and never stop killing enemies. If you’re feeling really brash, you can move ahead and just ignore the enemies chasing behind you, but I can attest this works for a very short amount of time before hell catches up with you. Also, the levels aren’t terrifically long or complicated. Like Golden Axe or Altered Beast, you can get from the start to the end of a stage in less than seven minutes, sometimes less, as long as you just keep moving.

So, when you’re looking for an arcade action experience, Wallachia: Reign of Dracula scratches the itch beautifully. You are always getting stronger and better, and the controls are tight and incredibly responsive. Unlike actual games from yesteryear, there was no sensation of floating or being disconnected from what I was doing. Elcin handles very responsively, able to make minute movements in order to dodge out of the way of some enemies and bosses. In particular, the final boss of the game has a massive aerial attack where you need to be standing in just the right spot to avoid damage, and I didn’t have an issue with being on my mark as long as I moved quickly. In addition, Elcin has the right arc and movements to land where she needs to and to have to hit targets at the apex of her jumps and dashes, meaning that this is a learning game: players who want to do very well will want to play it a few times to make sure they’re totally comfortable with the timing and patterns of enemies, particularly bosses. 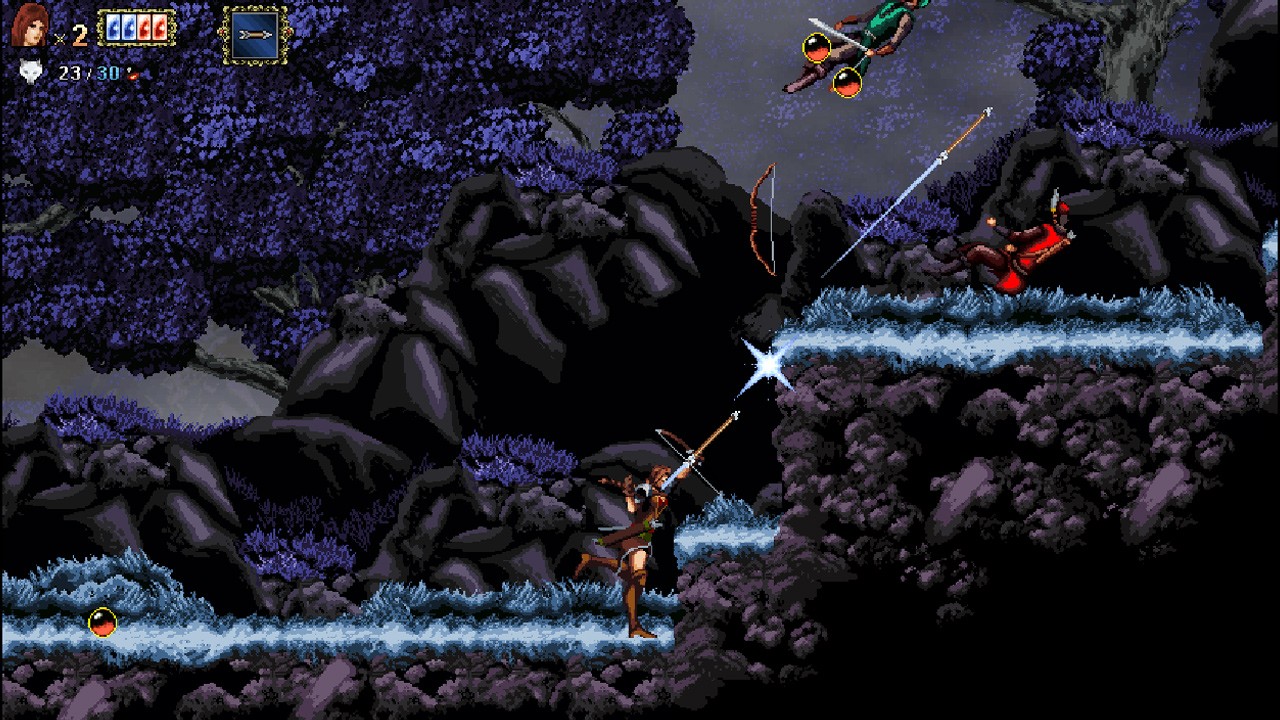 You may have noticed I mentioned the final boss, and I’ve dropped the word arcade a couple of times. If you’re looking for a very long gaming experience, Wallachia: Reign of Dracula is not for you. I got through the whole thing, front to back, in about an hour, maybe a bit more. If you decide to drag your heels and listen to everything that needs to be said in the different dialogue moments and cutscenes, then you can usually fluff it up to about 90 minutes, but not much more once you understand the game. It’s not something where you’re going to be beating your head against the wall for weeks to understand the final component of it all: the game is very up front about what it brings to the table from the beginning, and it’s up to the player to decide if that’s their cup of tea. For me, who’s been enjoying the Arcade Archives and all the NEO GEO releases, this certainly was.

Speaking of cutscenes, do yourself a favour, relax and enjoy the different voice acting that went into all the plot points and dialogue. I’ve been watching the Castlevania animated series recently, so I’m super into the different portrayals of the world of Wallachia. While Wallachia: Reign of Dracula is far less gristly, there’s a certain amount of dramatic power that went into the different roles and speeches. Nothing feels hackneyed or over the top, just some good performances that help explain Elcin’s role and the way that the different characters want to help her. You combine this with a very solid score, and players who are looking to be stimulated beyond just pixel art and some bosses that collapse like a house of cards (War Dragon was a little disappointing, not gonna lie).

But the action and the adventure is there in Wallachia: Reign of Dracula, and it’s a dope little game to have on your Switch and to bust through in an afternoon. You have replay value through both unlockable costumes (Miriam’s dress looks cool on Elcin) and being able to see a few other extra goodies that will appear through dedicated playthrough. Long story short, Studio Story Bird has a great retro title on their hands, and players who worship at the altar of old school will have a blast with this one.