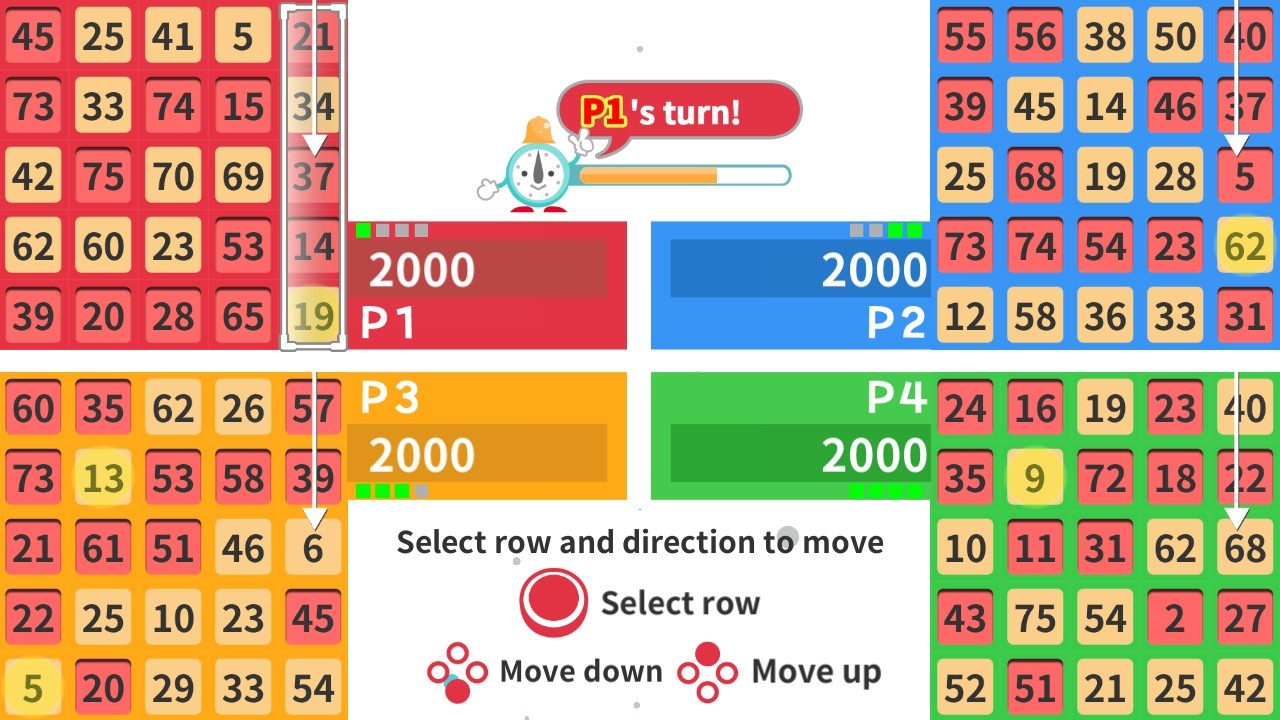 It’s time to twenty-nine, rise and shine and seventy-one, bang on the drum as you get your eyes down to play Bingo for Nintendo Switch, a new eshop release developed and published by Starsign.

As well as the classical version of the game, this title also offers three other variants; namely Buzzer Bingo, Slide Bingo and Bingo Poker. Not only can each of the game modes be played in single player against CPU opponents, but you can also sixty-eight, grab a mate and play local multiplayer with up to four friends. So, without further delay, let’s seventy-four and hit the floor with a more in-depth look at all of the game modes that are on offer.

Buzzer Bingo sees four players competing against each other in order to claim the number that appears on-screen in the quickest time. With one card each, containing twenty-five numbers, players must scramble to bag the number that appears on-screen in order to claim it for their card. As each number appears, a countdown commences and each player needs to scan their cards in order to ascertain whether they need that particular number. Whoever presses the A button in the quickest time claims the number. However, claim a number that you don’t need and you miss a turn plus pay a penalty against your score. If a needed number is claimed by another player in a quicker time than you, or the countdown reaches zero, then the number upon your card is blacked out and its corresponding line cannot be claimed for a Bingo call. Once a player completes a line, or lines, then the game is over and finishing placements are calculated depending on the total scores that each player has accrued. 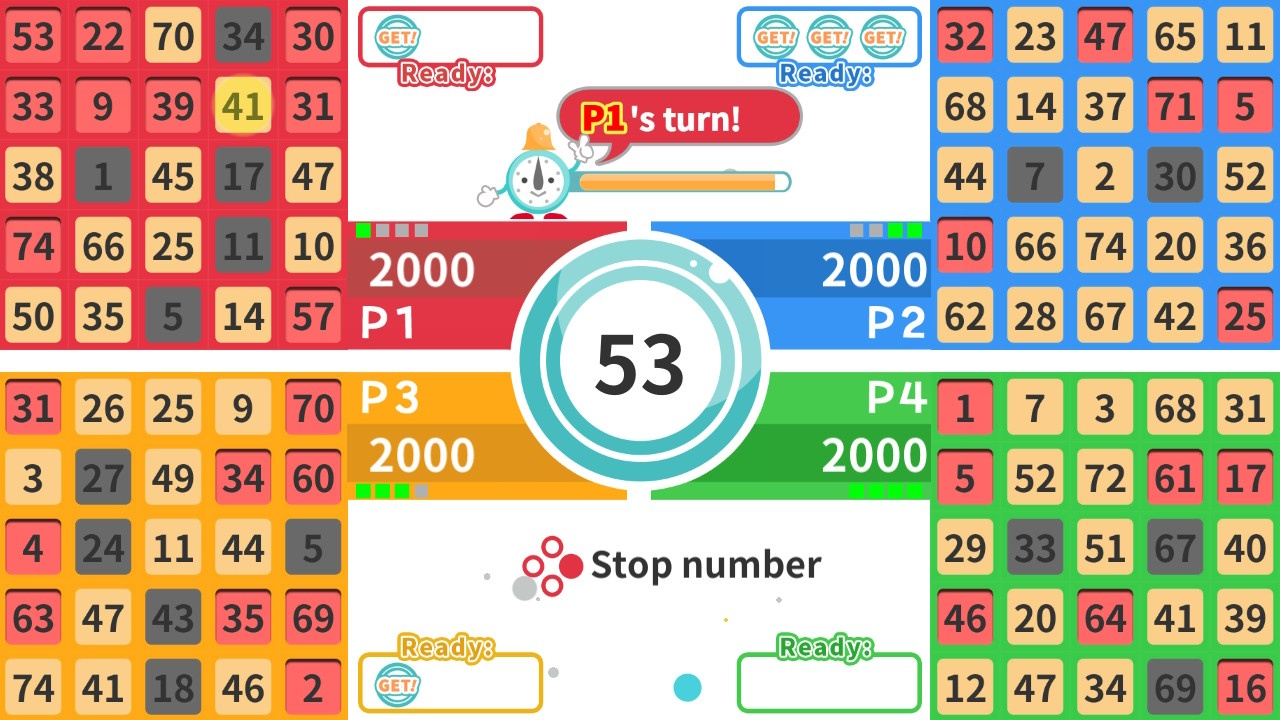 Slide Bingo is the second game mode and offers a completely different variety to the mechanics that are usually associated with the classic concept of Bingo. In this game, each player is presented with a card that has one number per line already claimed. Taking turns, each player highlights a row, or column, and can slide the numbers one step horizontally or vertically in order to match each of the claimed numbers in a row, column or diagonal line. However, each movement on your own card also shifts the same selection on every other player’s card, which adds a tactical element to the gameplay. After each player has made their selection, a further number is claimed on each card and the cycle repeats until Bingo is called. As before, placings are determined by each player’s total score at the end of the game.

The third game mode is Bingo Poker. This variant of the game begins with each player’s card having a total of four pre-claimed numbers upon them. Again, taking turns, each player needs to stop a counter that displays random numbers. Once selected, if the counter displays a number that is needed, it is automatically added to your card. The twist here is, when you claim a number that is needed, you then need to discard any unclaimed number from your game card, thus reducing the availability of Bingo chances upon it. If the counter displays a number that is not needed, then the following player gets a chance to steal that number if it is one that they need and so on and so forth, until a claim for bingo is made.

The last mode available is the classic variant of Bingo. In this game, a number is displayed and each player scans their cards to see if they need it. Any player can claim the number as long as it is done before the timer reached zero. Once a full line, either vertically, horizontally or diagonally, is completed then the player calls Bingo and each of the totals are added together to produce a winner. 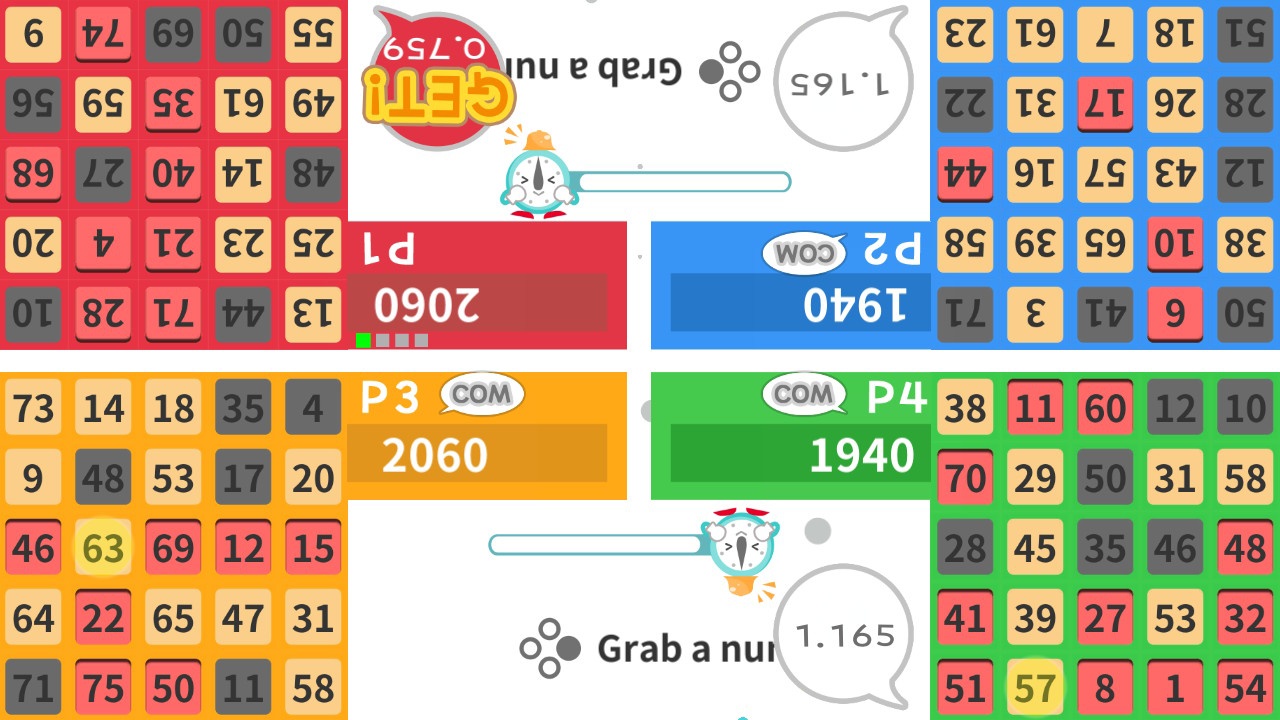 Whatever variant of the game you, or your friends, decide to play, a number of defining rules can be customised before starting. With these various options, you can choose a set number of games that can be played within a series, adjust the length of timers, if applicable, and also set an option called the lay-flat mode. With this setting, the Switch can be set flat upon a playing surface and the screen displays the playing area in the style of a mirrored reflection. This allows two players each, to sit either side of the Switch and play upon each of their respective cards that are displayed within each corner of the Switch’s screen. It’s a nice way to get friends, or family, sitting around a table to play together. However, in order to fully utilize this option of local multiplayer, each player needs to have their own sideways-turned joy-con with which to play.

Despite its variations upon the classical game style of Bingo, the overall package offers a very basic style of gameplay with its production values. Whatever mode you choose to play, there is nothing to reward you for claiming a win. The inclusion of an in-game achievement system, or virtual prizes, would have been a nice inclusion here and would have offered a more exciting premise to the gameplay that is on offer, as well as provide a hook to keep you playing over the long term. If you play with friends or family, then you can always add this element into the gameplay, but as a single player experience, this is something that is sorely missing.

As far as playing a game of Bingo, this title plays a solid enough game. However, there’s nothing particularly exciting going on within any of the games’ modes to make it a worthwhile experience. Although specifically designed for the Nintendo Switch, the game doesn’t utilize the touchscreen functionality of the console, which is strange decision for a game like this, especially for the single-player component of the game. There isn’t anything fundamentally wrong the game, it’s all just a bit lacklustre really, from the presentation to the soundtrack, everything just feels like the number eighty-nine; Nearly there, almost there, but not quite sixty-two, all tickety-boo!