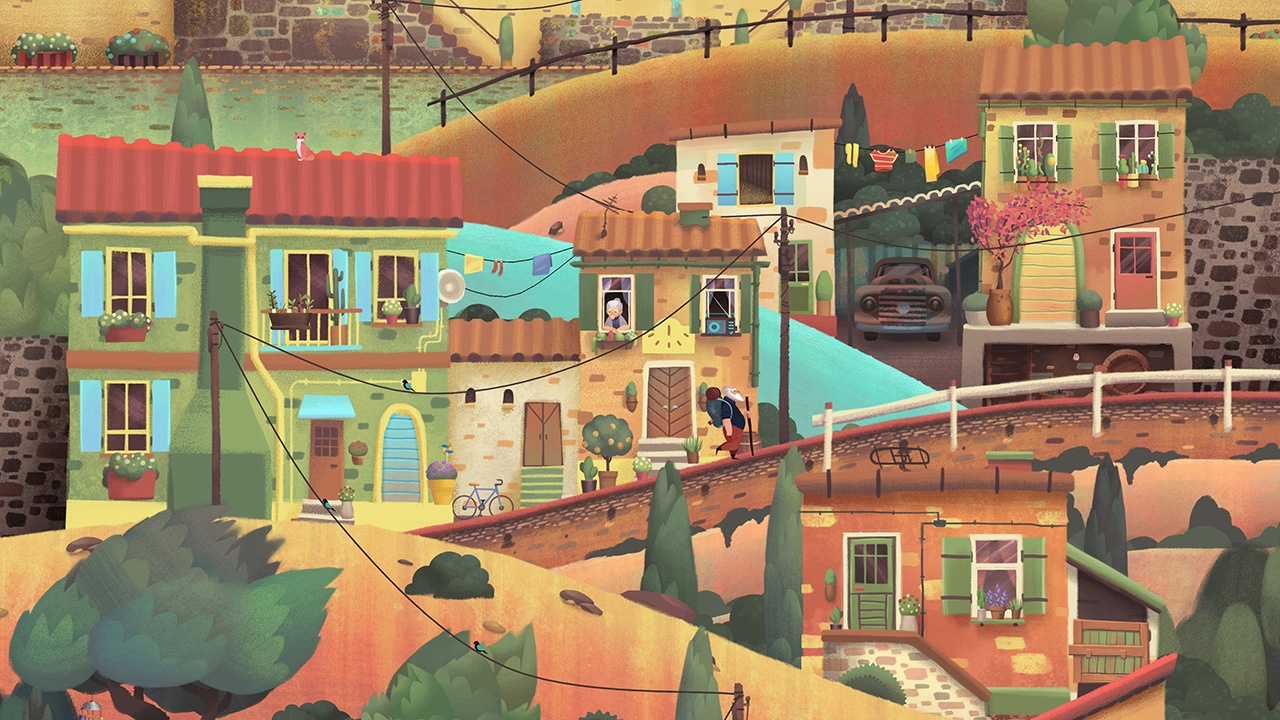 Indie games, while often exploring intriguing and exciting ideas, tend to be simplistic in their form and substance. As the vast majority of indie studios prefers to play it safe and stick to a singular premise, and clear and cohesive gameplay design. However, there are outliers to this particular rule, as a minuscule minority of modern underground game developers, tires to go one step beyond, and combines, or at least tries to combine multiple forms of game design, and execution of such. And the recently released Old Man’s Journey happens to be one of such games.

If you ware to google Old Man’s Journey, you would be presented with a plethora of concept art and screenshots, which would allow you to deduct that this particular game, is a story driven experience with a limited amount of interaction – a 2D walking simulator, if you like. But in truth, there is more to this particular title than meets the eye, as Old Man’s Journey is not just an experience, but a fully-fledged games with an entire array of gameplay mechanics, and gameplay elements, which allow it to stand out from the crowd.

Within the first five minutes of starting Old Man’s Journey, you’ll be tasked with moving the titular old man from one end of the screen to the other, in order to progress further. And with each and every level/screen, the title in question adds a layers of complexity, which turn the otherwise dull walking simulator, into a complete puzzle game. And one which tests one’s creativity and ingenuity, rather than patience – as all of Old Man’s Journey’s puzzles are crafted in a way to spice things up, instead of completely stifling one’s progress. 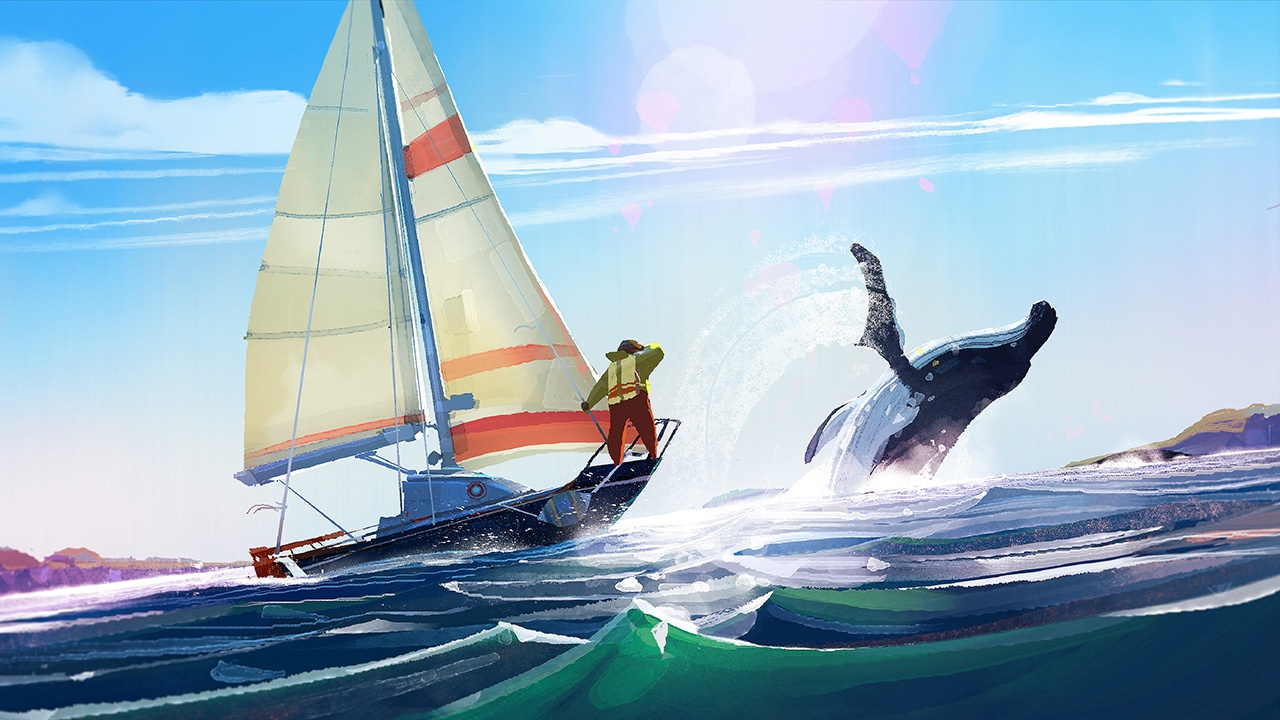 If you refer to the first and third image, you’ll notice that Old Man’s Journey features a lot of curved surfaces, which look a little off kilter, when compared to the remainder of the in-game environments. And that’s because those curved planes are used to trerraform the in-game surroundings, in order to allow the titular Old Man, to get from point A to B. And it has to be pointed out that when it comes to the title’s core puzzles, such are a joy to complete, as all in-game solutions are not limited to a singular path, and upon completion they fill the player with a sense of self accomplishment, and tremendous amount of satisfaction.

As you make your way through the title, Old Man’s Journey will continually increase the difficulty of all in-game puzzles by adding herds of sheep – which need to be moved around in order to clear the path, waterfalls – which allow the player to seamlessly move between surfaces, and stone wheels – which can be used to clear the path of any obstacles. And while the increase in difficulty and variety is more than welcome at first, it does run out of steam relatively quickly, as the developer behind the title over uses each puzzle complication over, and over again. And by the time you’ll reach your fifth waterfall, or third herd of sheep, you’ll feel like all the in-game puzzles have been run into the ground.

The above described issue could stem from a plethora of avenues, but I feel confident in stating that it is likely that the developer has overused the vast majority of in-game puzzles, simply to artificially stretch the title’s play time. As the issue of repetitiveness does not stem just from the puzzles alone, but from the title’s second act. And when playing, it is impossible to shake off the feeling that the said act has been forced into the game just for the sake of it. And if it only has been streamlined, or removed completely from the game, then it is more than likely that Old Man’s Journey would work much better as a whole, than it does right now. 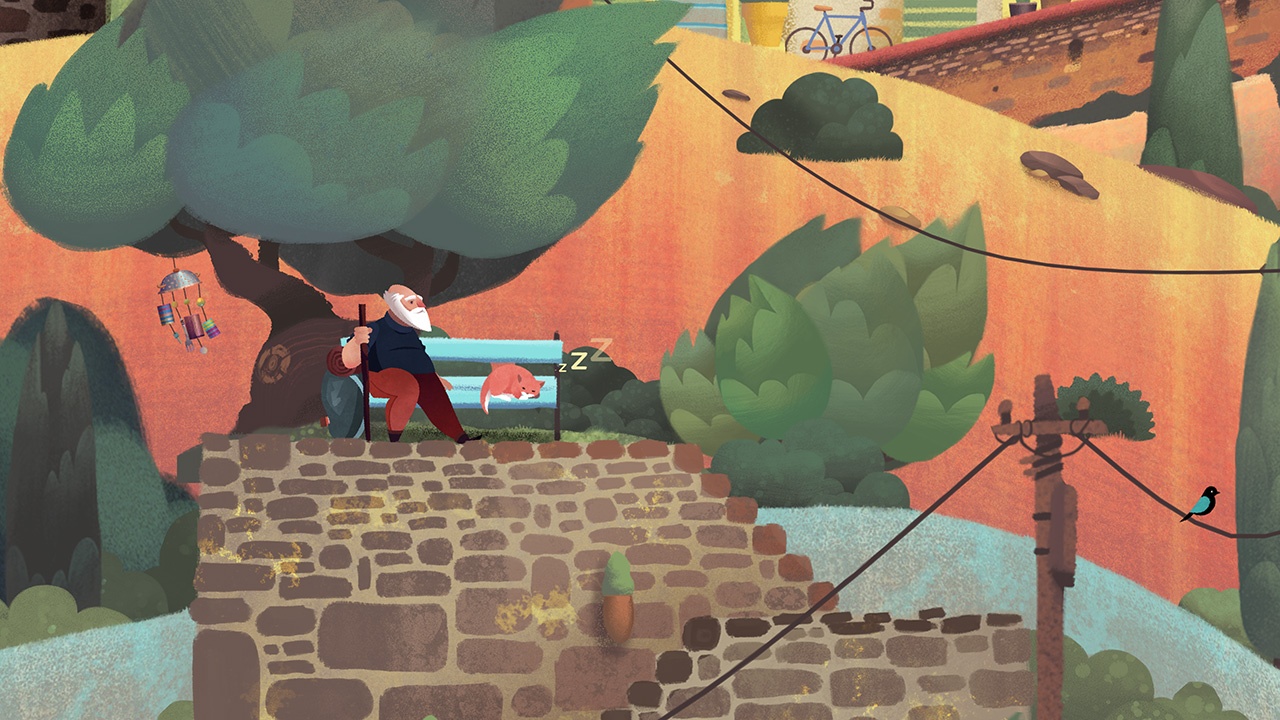 The first, opening act, and the third act which serves the role of the finale, are when Old Man’s Journey is at its best. As both these portions of the title are filled to the brim with colorful and vibrant locales, which are filled with a multitude of interactive elements, NPCs, and most importantly, stories. And while the second act does what it can to keep up, then it has to be said that it is not enough. As even with all of its bells and whistles, it pales in comparison the opening and closing segments of Old Man’s Journey.

Depending on your capability to solve puzzles, Old Man’s Journey should not take you more than two hours to complete – even if you are not a seasoned point-and-click, or adventure games player. And while such short play time may sound a little disappointing to some, then it has to be said that the developer has compensated for that with a superb, if straight forward story – which is told through stills and environmental design, and rather low price tag, as Old Man’s Journey retails for just £7.99. And you simply can’t go wrong with it, especially for such a low price. And while monetary cost of a game, should never been a deciding factor, but in this instance, the £7.99 price tag does enough to sway one’s opinion in its favor.

Ultimately, Old Man’s Journey may not be the work of art like Johnathan Blow’s The Witness, and it may not feature puzzles as entertaining as the one’s of the Grim Fandango, but when push comes to shove, it does enough to balance out its rather depressing and thoughtful story, with plethora of quirky puzzles and other in-game interactions. And as a complete product it is entertaining enough to warrants its price, even with its weaker second act taken into consideration. And if you are looking for a short, but bittersweet title to tide you over until the next big release, then it has to be said that you simply cannot go wrong with Old Man’s Journey.