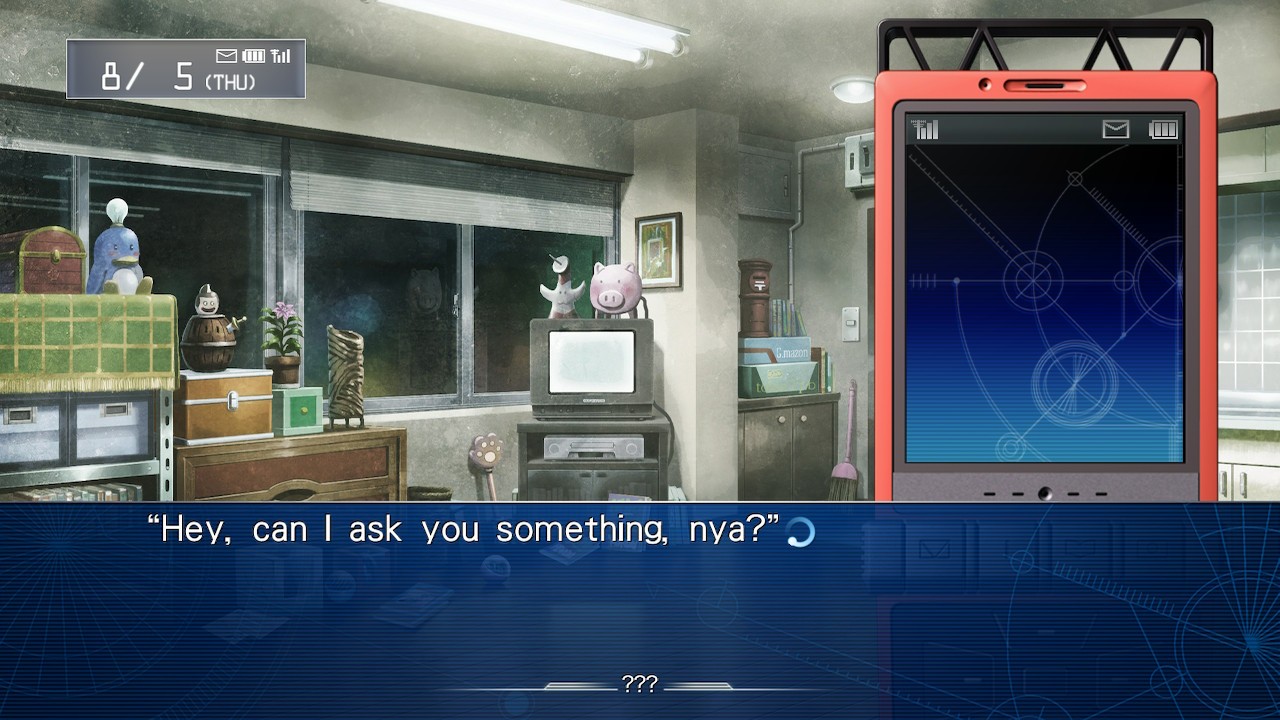 Anyone ever seen Sliders? This fantastic television show from the 90s, had Jerry O’Connell, John Rhys-Davies, a few other people I can’t remember without looking them up. It’s this idea of the multiverse being accessible to a college kid and a handful of people, including his professor and a potential girlfriend, and they get stuck moving from reality to reality, trying to find their way home. Every single stop is usually wildly different, like the Ice Age had never ended, or overpopulation is solved through a murder lottery, or things like that. But there were a couple of times where the reality was almost, almost right, just not quite. Like when we found the one world where the main character’s parents hadn’t died years before. It was a cool concept, and it really played with String Theory and multiverses in a way I hadn’t seen on television before. Steins;Gate seems to be tapping into that same vein with their bevy of media and multitude of sequels and offshoot projects, though, sadly, many have not been translated into English officially yet. So when another project from 5pb, Mages and the Science Adventure series arrives, I get excited, because this time could be different. And this time certainly was, though as to whether others will be excited remains to be seen. Hold onto your butts, because it’s finally time for the Lab Members to fight over who gets to date Rintaro Okabe, and we dissolve into visual novel trope hell, as we unravel Steins;Gate: My Darling’s Embrace.

In this chapter of the Steins;Gate saga, the events here should take place sometime after one of the successful endings of the original game, or, perhaps, in a timeline where the true events of the attacks by SERN, the madness of Dr. Nakabachi, and the quest to seek out the Steins Gate never occurred. In any case, the entirely of the cast is alive and well, and all hanging out with Okabe (aka Okairin) at their awesome apartment above Mr. Braun’s CRT shop. They are celebrating the success of their inventions, which Okabe doesn’t totally remember, because his memory is all messed up due to the alteration of the timelines. But there’s no need to fear here: everything is good, the menace is gone, and we just want to hang out and have a good time. The creative mind can never stop, though, and Okabe is itching to start work on new inventions. In the course of his Lab Members assisting, conceptualizing, and criticizing his ideas, we get a chance to pull back the curtain and really look at the life and minds of those around Okabe, and we posit the question: can a self-proclaimed mad scientist find love in these crazy times? 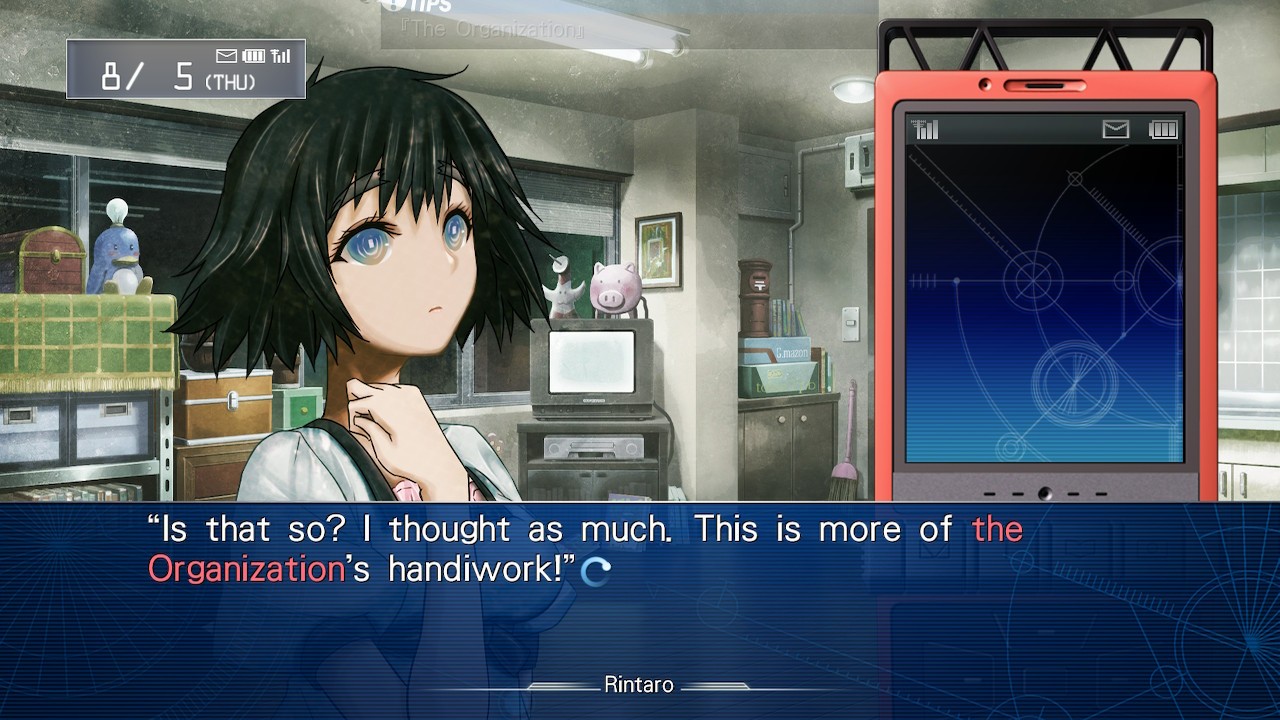 Yes, Steins;Gate: My Darling’s Embrace is a full on dating visual novel that uses all the mechanics and ideas from the main series to further the agenda. Throughout the course of a rapidly spiralling storyline, you may or may not receive text messages from your fellow Lab Members, and it’s up to you to decide what to do with them. Not responding in time carries consequences, and choosing what to say to the messages through preset blue text will resonate in different ways. You can, theoretically, ignore all the texts and just barrel ahead with the storyline, because here’s the good news: there’s no such thing as a bad ending here. There are certainly better endings than some, true, but, coming from a game series where the friends and loved ones in your life just DIE repeatedly, this is a rather pleasant change of pace. Rather, you get a chance to see just where your heart might end up residing. Will it be the same choice from the previous games in the fiery tsundere that is Kurisu? Does your soul long to be with your childhood friend, Mayuri? Is there something to the Part-Time Warrior, Moeka, that goes beyond her inability to clean her apartment (and her very weird role in the first game) and really strikes a chord with your heart? Are you ready to make things super weird and fall for the future daughter of Daru and date Suzuha? Or, better yet, is Rintaro’s journey destined to be alongside Luka, in a twist that I didn’t think would be in this game but was pleasantly surprised to stumble upon?

Since the mechanics of the game are the same as previous Steins;Gate entries, your pleasure with how to play My Darling’s Embrace resides entirely on how much you’ve enjoyed fiddling with your cellphone and making chance decisions on text messages previously.  There were a couple of times where I basically locked in my final fate earlier than I had realized, and ended up not making choices in any capacity for several hours until the finale revealed itself. When I stumbled onto the path for Faris, I actually thought I was getting on really well with Luka, and then suddenly I’m petting her head on the street corner and she’s giving me kisses on the cheek. It wasn’t completely unexpected, but it did feel like a bit of a curve ball, which means you need to consider the gravity of what you do and don’t do, as you might seal your fate sooner than you realize. Not checking mail is as important as responding, so, if you really want to try and lean in towards getting Suzuha in your life, maybe ignoring what others are trying to communicate with you might be ideal. There’s no surprises here, based on the importance of the previous games’ mechanics, but, again, not being afraid of killing someone allows you to be a bit more fast and loose with decisions. Oh, and also the quest to unlock the pages upon pages of CG scenes is important, as I didn’t even fill three pages with three endings.

The plot line outside of trying to find a date is ridiculous, but I can’t entirely fault Steins;Gate: My Darling’s Embrace for that one. When you have so many paths that diverge, it can be hard to centralize in on one thing that might keep everyone together. As you sprint down the various avenues, we have silly backdrops to keep moving towards the ultimate goal. The invention of something that prevents couples from cheating by shocking them every time they fight with each other or think about another person. Every single person and their mother working at the cat maid cafe alongside Faris. Some dude named 4 Degrees apparently planning to buy out a massive block of buildings to make a dope nightclub in the heart of Akihabara. It’s all silly, but it works because it leans even more heavily into the tropes of anime and dating sims while almost being self aware about it. We’ve seen too much from these characters in dramatic scenes that explore a lot of deeper psychology to take them seriously in a world where the biggest issue is that Moeka is taking too much time off of work to assist in the cafe. Unlike Steins;Gate 0, the silly and light tone here isn’t strangely out of place or feels like a distraction from the deeper matters at hand. There is nothing more or less than what you see and the quest to find out who Rintaro will ultimately end up with. 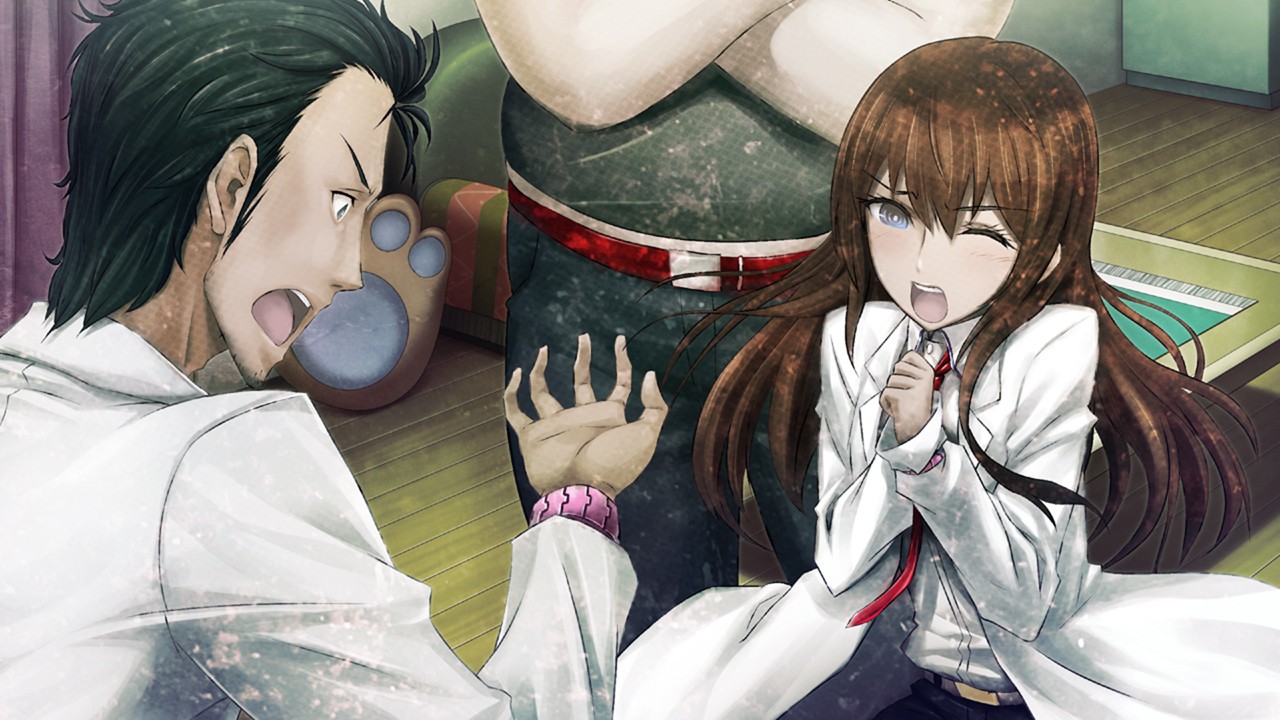 Once again, the phenomenal voice work, coupled with amazing writing, are what keep this game firmly out of the reach of other harem dating simulations and keeps it within the Steins;Gate universe. The game is peppered with more references and nods to pop culture within Japan and other games/anime/movies that inspired the developers (and subsequently the characters) in the lore they’re creating. There isn’t a pathway that seems unlikely or unlikable just because the person in question is out of touch with the world. Leaning on events and ideas that have been presented in other games (and knowing the chemistry that everyone has in correlation to Okarin’s outlandish personality), the blossoming of romance feels natural even if the aspects that lead you there necessarily aren’t. I couldn’t shake the feeling there was a chance that Rintaro might be interferon with his own love life through D-Mails, either coercing affection through precognition of what affects someone the most, or maybe even intentionally interfering so that he doesn’t find love in the way that seems the most natural. Thankfully, these are things that I am thinking about after the fact, not during the game. During the game, I’m legitimately laughing aloud at the deliveries and the passion behind the moments, and being a bit impressed at how good Rintaro looks in a tuxedo despite being a very, very stereotypical Akihabara dweller. There’s nothing here I don’t like, and I kept going back again and again to find out how love might take root in different circumstances.

Steins;Gate: My Darling’s Embrace is such a fantastic piece of “what if” gameplay for fans of the world of the Science Adventure series. It’s lighthearted, silly, genuinely charming, and is a great storyline for people to follow if you’ve already enjoyed a bit of Steins;Gate and want to see all the characters have their own happy endings in different ways. The only caveat is that it might not land with people who haven’t played the first game, but that’s its own form of “what if.” After all, maybe not having seeing Mayuri die in several different fashions will keep players from feeling strange to see her just peacefully living life. Still, if you have any interest in breaking away from metaphysical science and apocalyptic futures, and just want to enjoy watching people falling over themselves while falling in love, this truly is a delight.

A silly but sincere departure from the core games, My Darling’s Embrace is the romantic filler episode in what has been a very heavy series, and I loved it.