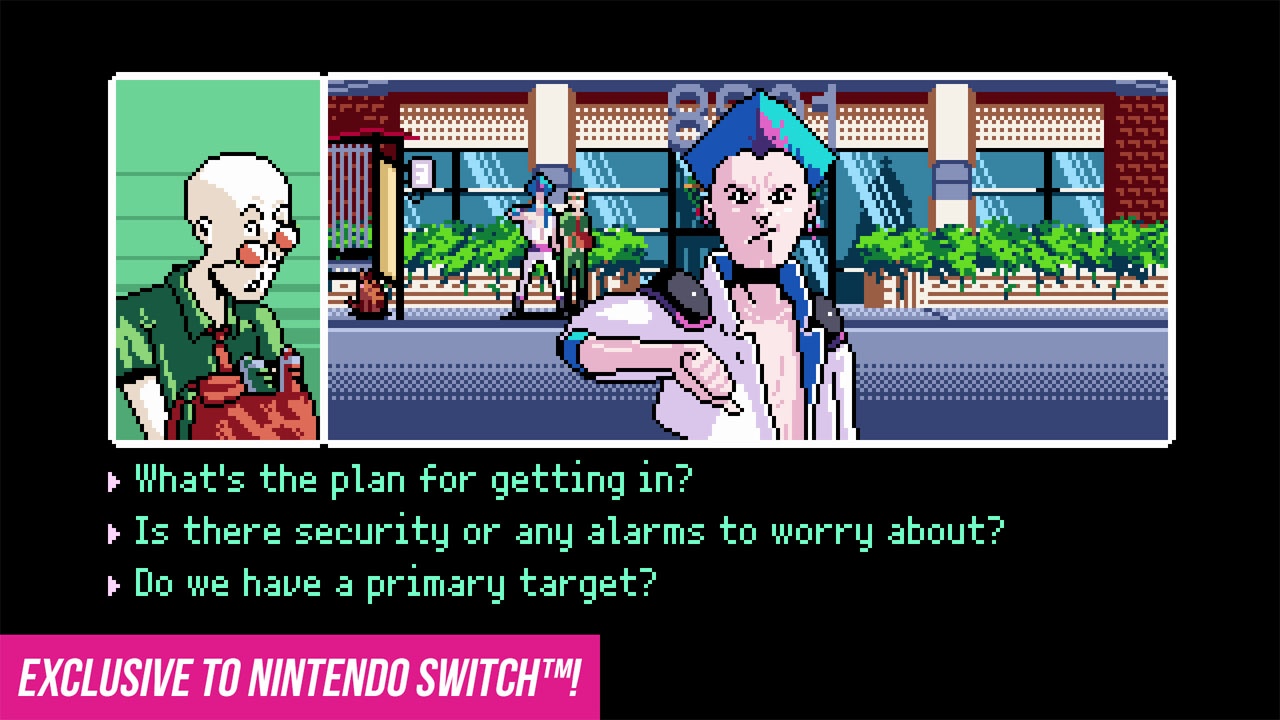 2064: Read Only Memories is a game that can’t seem to stand on its own two feet and simply be a game. When it was first released some years ago, it certainly made waves with a lot of interesting graphical and aural influence, but the tone and disposition of the game made it a tad unsavory. The powers that be, the gang at MidBoss, didn’t take too kindly to how the game was selling, nor to the state of the world at that time. You see, without diving too far into it, MidBoss made some pretty big and loud statements online, and those weren’t universally taken as “nice words.” And then, this year, it turns out a few people in the company weren’t always being great in the office, and the company has changed hands quite a bit. Which is probably why it took so long for this release to finally hit the Switch, and possibly why we’ll never see another game from MidBoss. Maybe that’s for the best, maybe it isn’t, but all the hoopla and finger-pointing have made people forget that, at the core of it all, is a game that has some really interesting points, designs and ideas, and we shouldn’t forget that. Especially not with 2064: Read Only Memories Integral, which appears to be the definitive edition of the game. And, I gotta say, it’s pretty damn good.

The plot of 2064 is pretty long and crazy, given that this is basically a visual novel on speed, but I’ll condense it the best I can. In the future, people have the ability to augment their bodies with different aesthetics and technologies, and some people like it and others don’t. This creates a divide between folk who choose not to change (The Human Revolution) and literally everyone else. Also, in this time, a big company called Parallax has made Relationship and Organizational Managers (ROMS), which are robots that do everything for you and act like they have personalities (but they don’t). Then a developer called Hayden makes a ROM, named Turing, who has awareness, which may or may not be good, but it probably scares some people, because Hayden gets kidnapped and Turing runs away and finds…you. You’re a journalist who’s just trying to make a living, and now you’ve got a thinking machine in your lap and you don’t know what to do. You and Turing decide to head out, find out what happened to Hayden, and, along the way, explore a lot of dynamics about what it means to be human and alive, what a soul really is, and how often to talk to your plants. That last one seems like a throwaway, but I assure you, it’s kind of important. 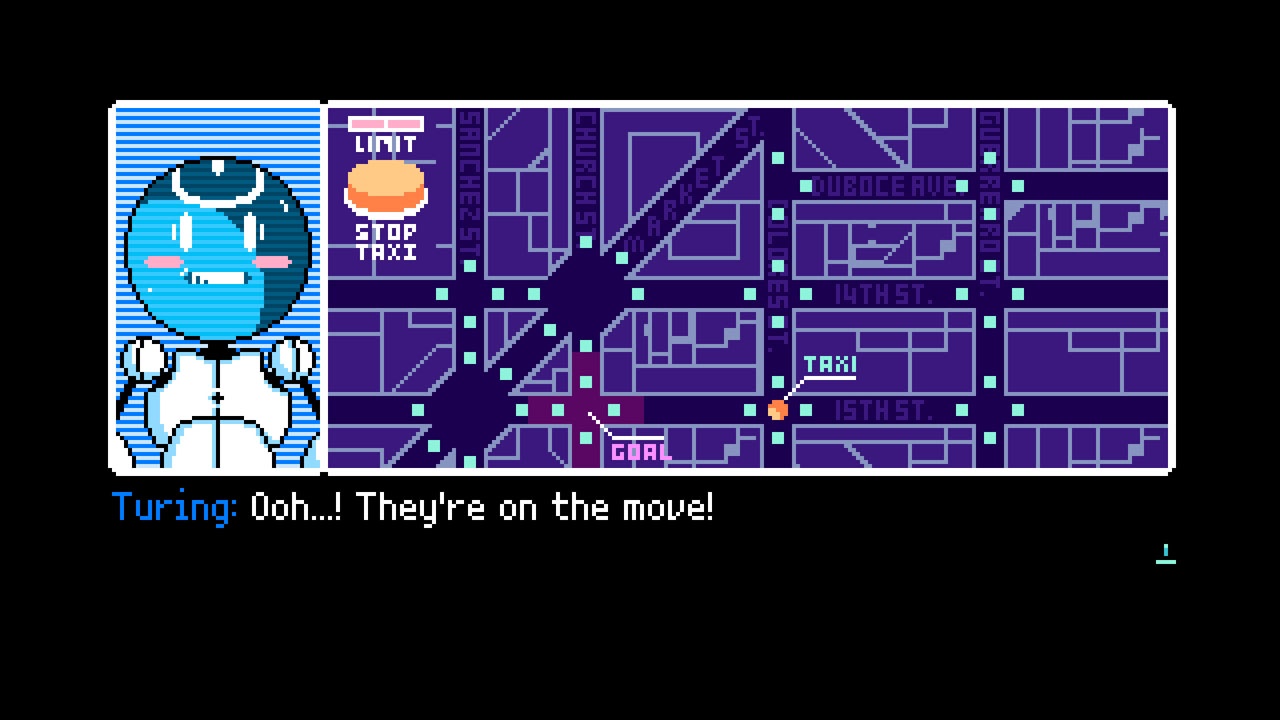 2064: Read Only Memories is a massive love letter to Snatcher, an awesome cyberpunk exploration adventure made back when Kojima was still newish at Konami and everything hadn’t gone wrong yet. Presented in a first person, flat computer kind of perspective, you and Turing have the ability to interact with multiple things on the screen, attempting to talk to, touch, and open whatever comes across your way. You’ll also pick up a bunch of stuff and use it on other stuff, because you’ve played a point and click adventure before, so I genuinely hope this isn’t all new and baffling to you. As you move through the game, you’ll have a bunch of choices to make, from what drink you get at the bar to whom you ultimately side with regarding human augmentation. These choices will open and close dialogue paths with other characters, and every step moves you closer and closer to the finale of the game, which, to be honest, has the potential to be incredibly dramatic based on what you decide. Along the way, there are also puzzles, but less “answer my riddle” and more “figure out where to put this thing with the thing.” It never ventures far enough into absurdist territory to make the answers obfuscated, but there are a couple of solutions that I had to look up online in order to figure out, mostly because I’m lazy and I really wanted to get to the ending.

One thing that absolutely needs to be said is that 2064 is a hard, hard sell for people who don’t like storytelling. Clocking in easily at 10-12 hours, most of your time in 2064 is spent either reading or listening to everyone tell you everything about everywhere. There cannot be a critic out there who feels that the world of 2064 isn’t flushed out enough, and anyone who says otherwise didn’t make it far enough in the game.  There’s so much exposition I feel like I went to school with TOMCAT before they inexplicably turned into a video game character. There were times when Turing started talking and I wasn’t sure when I would be able to walk away from the game, not just because he said so much, but because it was fascinating what he was expounding upon. The Integral version of 2064 has all the full voice acting from previous console ports, and the work is really bang up in terms of selection and pairing. One of my personal favorites is still the bartender, just because my initial viewing of him lead me to think a deeper voice was in store, but, once he got going, I saw he was the perfect sound box for the dude with the drinks.

The story of 2064: Read Only Memories has always been good: I don’t think that was even in doubt. The art and soundtrack are incredible, and I love that the DLC from Steam of the standalone music and artwork are available (for free) in the extras section, allowing for players who’ve been down this road before to simply relax and enjoy the tunes of the city without needing to revisit all of the locales inbetween monologues. The one thing that I still can’t shake from this game are the paths and decisions that I need to go down in order to progress the game forward that leaves me with almost no recourse that I want to follow. There are moments where my character, who is a blank enough slate that I’m supposed to superimpose my own will onto it, will be asked to say either something I’d never say or something that I’d DEFINITELY never say. It’s seriously uncomfortable, and it exists in order to justify the actions and responses of other characters in the future, which I completely understand. However, during the setup, 2064 makes a very big show of letting Turing get to know you on this almost molecular level, as you give him your name, diet, desired pronouns…this is a very big show of customization to align yourself with the game. But then to be made out to either speak in a rude way when an obviously polite solution exists (I’m sorry, for example, or thank you) or to be a part of actions that feel purposely inflammatory for the wrong side is bizarre. I think, had the game not been so insistent that it was attuning itself to me, I would be less put off, but, instead, here we are. 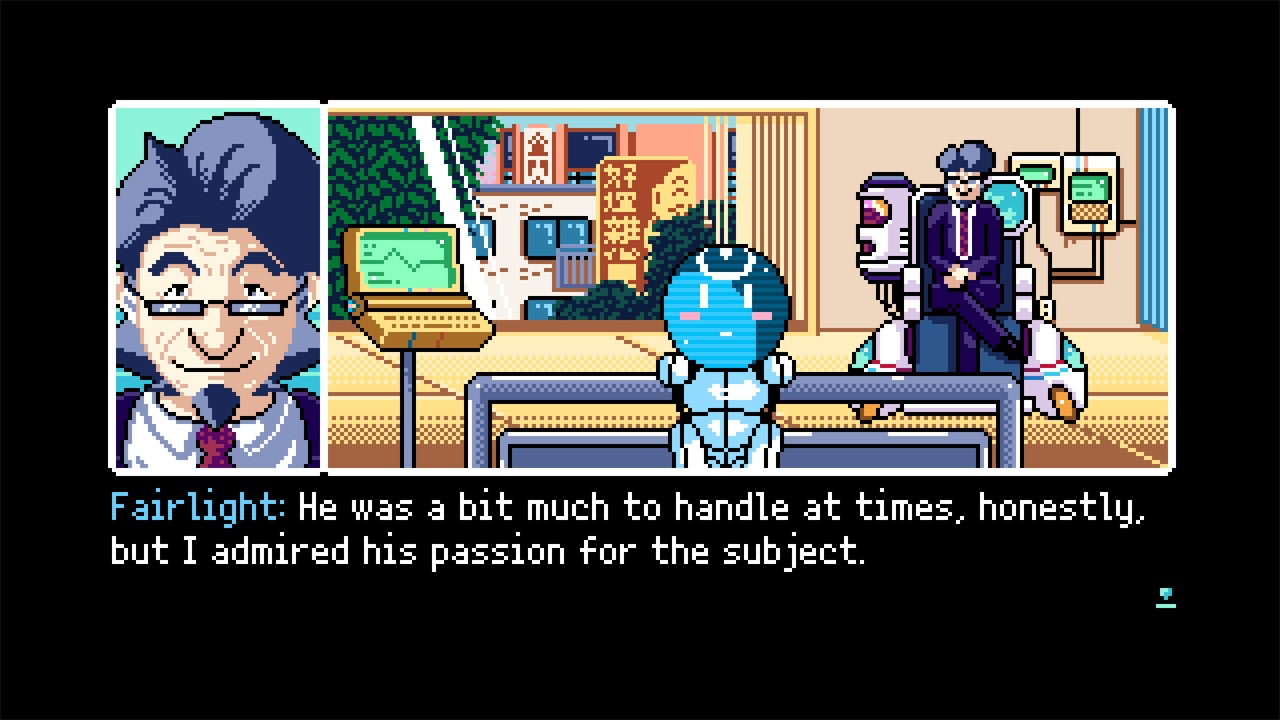 2064 is worth the playthrough, however, and not just because of the story. The world itself is a fascinating and enjoyable place, so much so that the cyberpunk bar simulator, VA-11 HALL-A, coexists in the same place, just at a different time. And, when you eventually get your first ending to the core ROM game, the Integral edition has the sidestory, Punks, ready and available for you to play, fully voiced and equally interesting, perhaps moreso because you, yourself, are not a part of it. Punks is playable from the Midboss itch.io site, but more as a text-based adventure: The Nintendo Switch is the only place to experience it, fully voiced and animated, and it’s an interesting and exciting side story that fans will want to bite into as soon as humanly possible. Then again, if you’ve never played ROM before, Punks may not be enough to necessarily tip your hand into the purchasing category.

This is a game and an adventure where, if you can swim for the first ten minutes, you can easily swim for another two hours. There really is an utterly fascinating dissection of the human condition within, and Turing’s grand quest becomes one that I’m both excited and terrified about in the same swing. If you’ve ever been interested in 2064: Read Only Memories, the Integral Edition on the Switch is the way to go. Just make sure you’ve blocked off some time: once you get going, it’s really hard to log out.