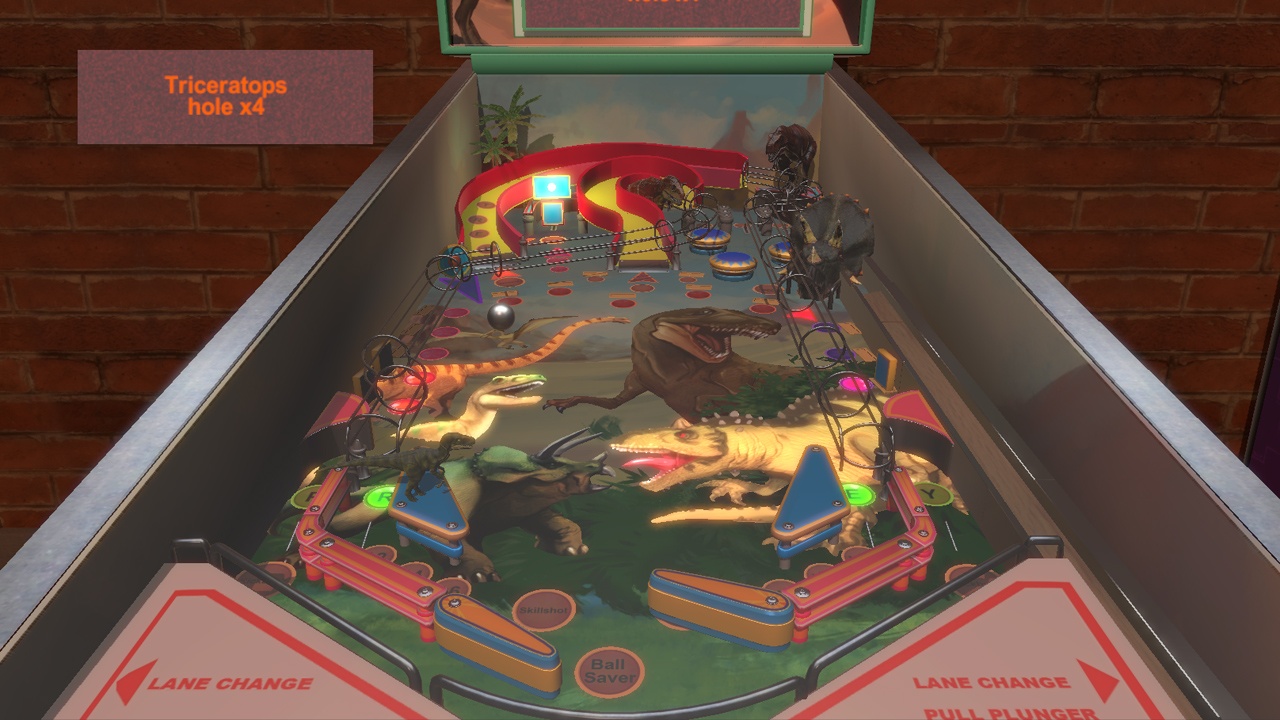 Growing up, sometimes I would receive small gifts from my parents or other family members that I had to remember the thought counted more than anything. Sure, maybe it wasn’t the biggest or flashiest thing, but they loved me and they made efforts to try and connect that with something physical. Like when I got a Tiger Handheld Electronic game instead of a new NES cart: totally understood. NES games are expensive, Tiger was cheaper by comparison, and it was still a video game. So I graciously said thank you, gave it a real try, and then it ended up being re-gifted to a younger cousin at a later date and time, far away from others eyes.

Jurassic Pinball, sadly, falls into one of those types of situations, especially with it’s release on the Nintendo Switch. There is a very simple premise here: dinosaurs. It’s a pinball table with dinosaurs on it. The name, obviously, is to help evoke the ideas and notion that come with the highly successful book/film/other game franchise, and there’s nothing wrong with that: it’s been done for years. On the surface, you’re getting exactly what you’re paying for, which is a pinball game that happens to be peppered with dinosaurs all over the place. There are standard multipliers for hitting targets multiple times, the occasional multiball, dino-themed events (spell PREY to activate more bonuses) and online leaderboards. It’s not bad in the general sense of the word. 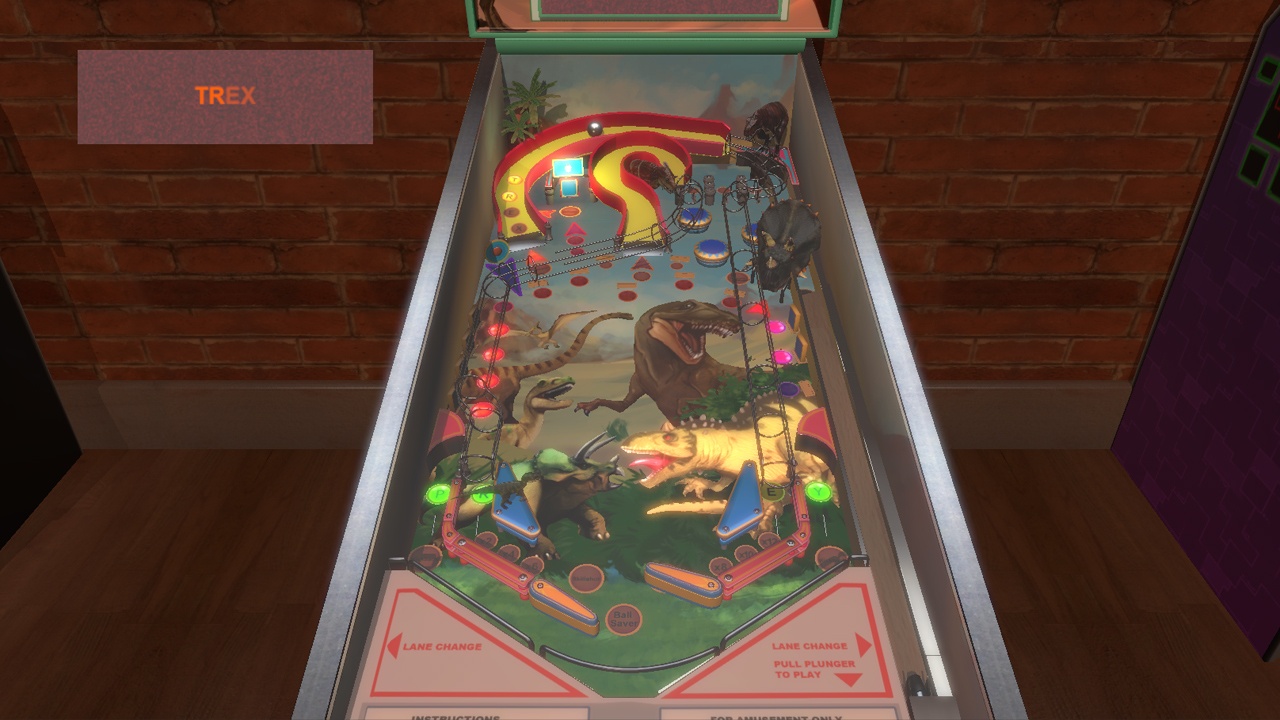 And, in fact, Jurassic Pinball doesn’t do anything inherently wrong with what it’s selling. The screen offers an interesting view where you can see the digital display of your score on the backboard as well as in a floating box to the right. Nothing is set up too easy or hard, and I actually really liked the hidden nook in the upper register that allowed for activation of the velociraptor event. When I played, it gave me the sense of enjoying pinball on a smaller, toy machine that my parents may have gotten me after a good report card, something fun and engaging but not too pricey. It’s nice, which is a weird word to describe a game, but there you go.

The flaws of Jurassic Pinball come a bit with the technical execution of it all. Firstly, you can swap camera angles, but the four available angles all feel like they’re in strange places. The first two seem almost identical, with a slightly different skew of being right on top of the launch position with a decent, wide-angle view of the rest of the table. The overhead view, however, is way, way too far away. When you pull back from the table that much, it felt like I was looking down on it from the floor above, calling out directions to another person to play. I know this is a digital game, and, as such, we are not limited by preconceived notions of how the game should be done, but this broke the immersion to the point where the game stopped being recognizable. It was a bit surreal.

Additionally, the button setup is very questionable. Shoulder buttons for flippers, alright, works great. Right stick for plunger, no problems there. The minus button is the camera angle, strange but not totally unfounded. And then nearly every other button is table nudge. Eight different buttons of table nudge. Nudging is a great thing when used incredibly sparingly and precisely, and this table doesn’t lend itself to that kind of extremity. Most of the time, if you’re about to miss a shot or a drop, the nudge does nothing but piss off the table and work you closer to tilt. I feel like the nudge is this antiquated thing that pinball greats remember as strategic for older tables where gravity and physics were key, and it can be incorporated into new, digital tables with a bit of planning. But here, in Jurassic Pinball, it’s violent and kind of unnecessary, almost like someone remembered hearing about nudging at a bar once and decided they needed that for their pinball table too. 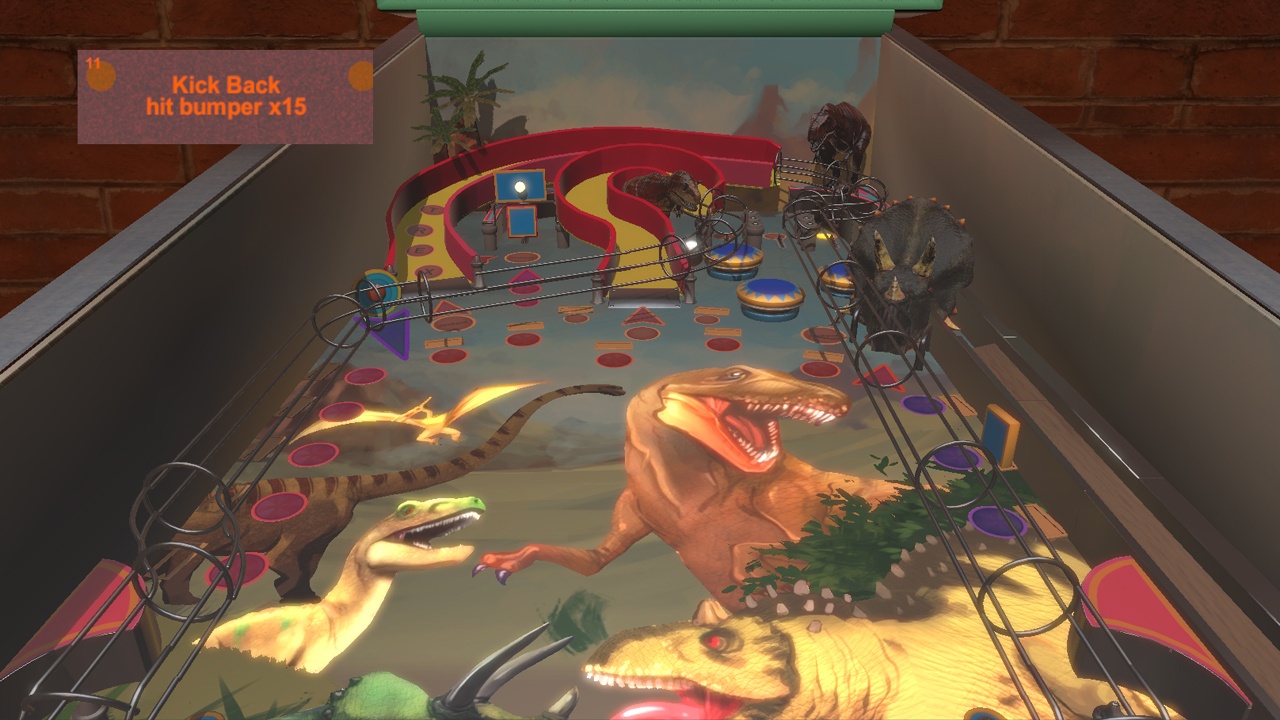 Lastly, Jurassic Pinball just feels way too artificial and floaty. The ball zips along with a good speed and momentum, but the reaction with how it gets hit and how it bounces off bumpers feels like something is just slightly off. Have you ever drank RC cola and really contemplated it? You know it’s cola, and you know it’s not supposed to be like Coke, and then you realize there’s another element to it that makes it feel odd? That’s what happens in Jurassic Pinball. You play for a few minutes and it dawns on you that the cadence or flow of it all is just a bit off time, just enough for it to earworm you once you realize it’s happening.

It was a bold move to bring an independent pinball table onto the Switch when so many big names already exist, and I think Jurassic Pinball is going to work well for the audience it wants. It’ll get people who are looking for a cheap thrill, kids with a couple of bucks in Gold Coins and probably a few parents who balk at the ten dollar price tag for the Pinball FX3 Jurassic World DLC and figure “this is just as good.” For those folk, by all means, two dollars isn’t the worst price for this. But, if you’re looking for something in line with the other pinball experiences available, you might as well steer clear.