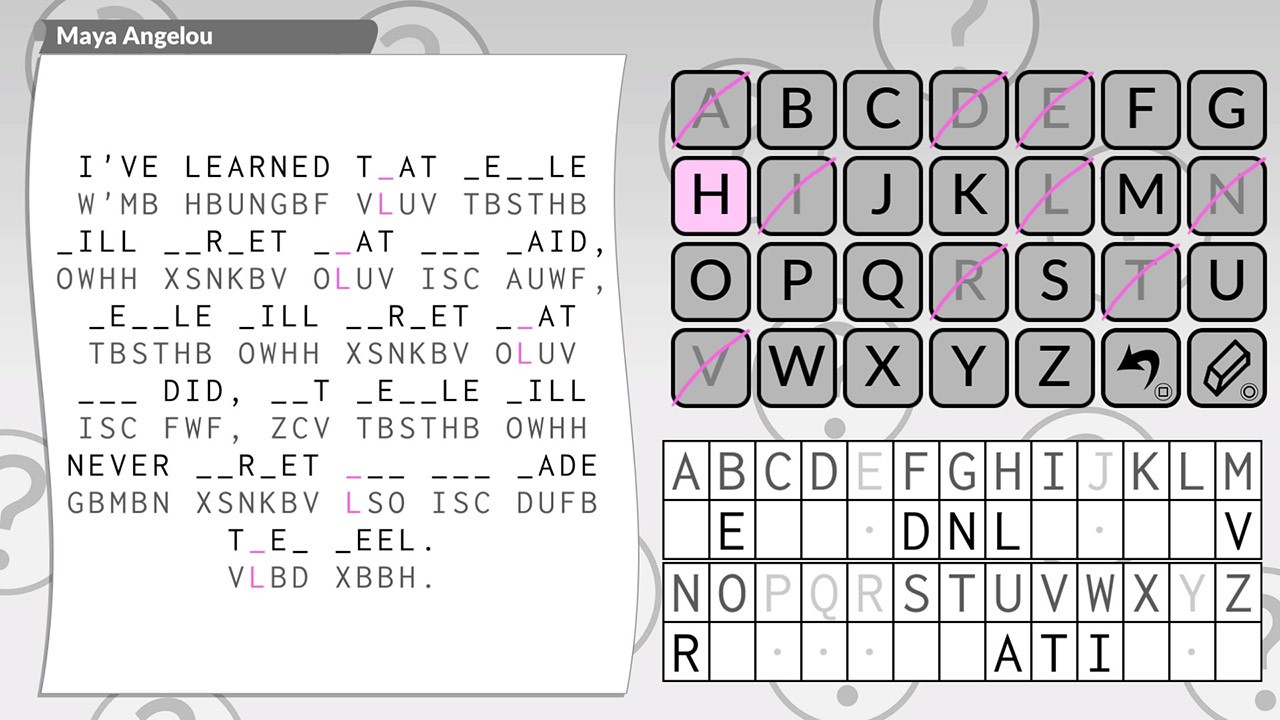 You’ll know whether you’ll like Crypto by POWGI either by reading what genre it comes under or the screenshots alone. This is a bit of a tricky review to write as the game is essentially like reviewing a sudoku puzzle you find in the back of a newspaper. Much like its newspaper counterpart, it’s flat and uninspiring, and the only interaction originates from your supposed brainpower to decrypt a code by swapping out letters with one another to make a famous quote.

It doesn’t sound like I’m selling it, but it’s a difficult one to promote. In the game, there are a series of quotes from famous people – mostly people who have had some prominence in society, or at least offer some pithy insight or observation that we can all relate to. However, the quotes selected in the game aren’t the quotes that are the most well-known. For a couple of reasons, I suppose. The first would mean it would be too easy to guess the quote, and thus eliminate the challenge but also because of how the game works.

Like the classic game hangman, you suggest several letters to fill in a blank. Once you’re out of letters, your stickman is hung, and it’s game over. Crypto by POWGI doesn’t have a game over as it offers a somewhat different approach. All of the words from the quote are laid out on the screen, represented by dashes. Underneath are a series of scrambled letters that are ‘code’ for another letter. For example, there will be the definitive word ‘the’ and underneath the three dashes will be the letters g,o,s. On the right hand of the screen is the alphabet and at the bottom are the letters from the puzzle. 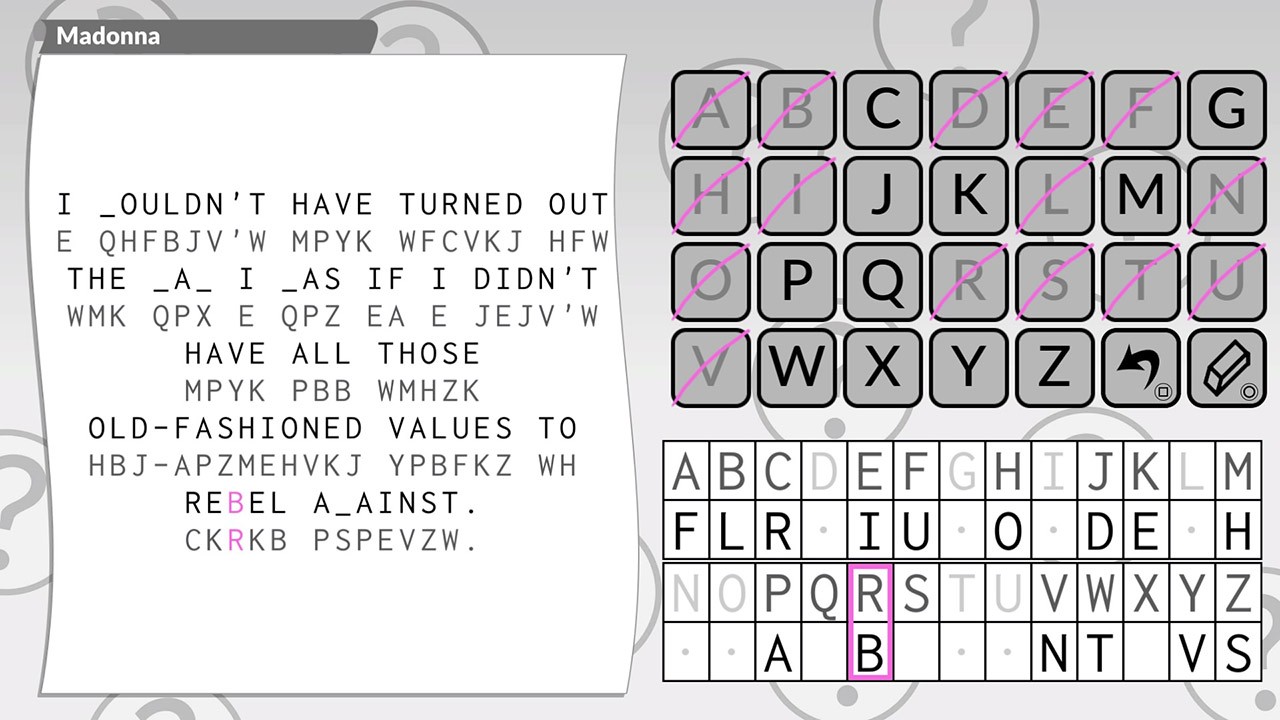 So, you select your first letter – in this case, ‘g’ and find the letter you think fills the space. For this example, you put a T in its place; then on the left hand of the screen, the letter T will show up on every dash where a ‘G’ is shown. Likewise, you associate the letter H with O and E with S, then you have your first word complete, then hopefully, a lot of the other blanks have been filled, and you can mop up the rest with your wordsmith skills. None of this probably makes sense, but believe me, the concept is incredibly simple, and I’m sure there’s a strategy for this like the contestants on Countdown would use, but I was mostly winging it.

Based on the choice of historical figures and celebrities, there’s bound to be those that you will select first of all but disappointed you don’t recall the quote or perhaps find it too hard that you’ll come back to it. My first quote was by David Lynch, the director, and was pleased to have solved the puzzle at a reasonable speed – the same with Kurt Cobain, H.P. Lovecraft, and P.G. Wodehouse. But, there were a few that were challenging to get the game going such as quotes by Seneca where I had to quit out of the puzzle and come back to (without cheating and looking through my books).

It’s nice to know that when you exit a puzzle, it will remain the same as how you left it. Sometimes taking a break and coming back to it really helps as you see with a different perspective, or in some sort of fluke, find a couple of letters that fit, and the rest is then a piece of cake. There weren’t any hints that I was aware of – no themes, no letter was highlighted either to give you a nudge. There aren’t any achievements in the game other than unlocking the puzzle, so no explosion of confetti or a digital sticker to say well done, so the only real satisfaction is from the fundamental problem-solving. You could, of course, look up the answers online, but that’s like buying a sports car and having someone else drive it – you need to experience it yourself, earning that justified look of smugness when you’re family watch you solve a puzzle in awe. 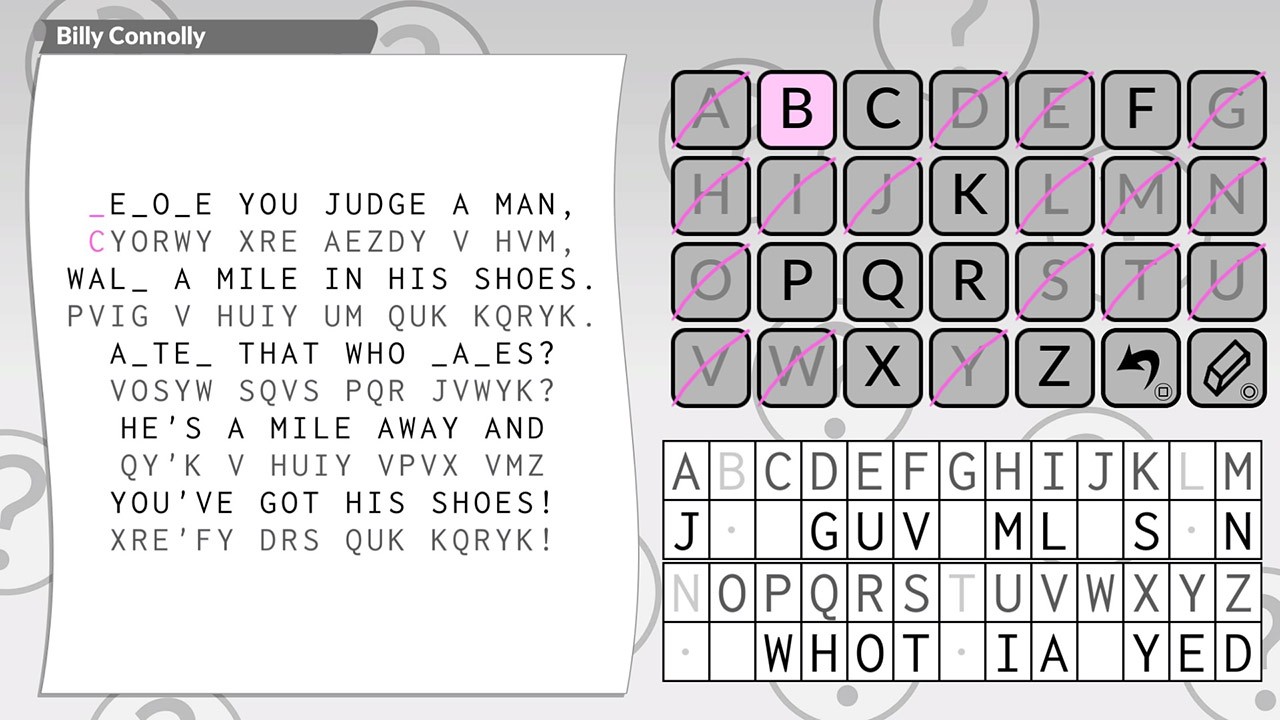 Some of the personalities on offer are quite interesting as there’s something for everyone to some degree. There were a lot of comedians in the game, which was good to see, and it wasn’t for just one demographic as it was pleasing to see Steve Martin, Billy Connelly and Jimmy Carr. However, taking into account the various nationalities of the personalities, the spellings may vary on where you’re located. For example, when I was trying to spell realise, it was the American English variant of ‘realize’. It’s confusing as such as it’s often only one letter swapped out or one removed – ‘colour’ is another. It wasn’t game-breaking of course as by the time you spell out the word, an s or z would look out of place in other words.

When it comes to recommending the game, it’s a tricky one. There are no elaborate splash screens and animations as such; it’s all very plain – the focus, as it should be, is the puzzle in question. It could do with the odd optional hint here and there as looking up a quote may spoil the fun in it. I haven’t had to do so yet, and while I haven’t 100% completed everything, I want the pleasure in being able to solve everything myself. There are a lot of quotes here – pages and pages of personalities, so unless Crypto by POWGI is the only game you own and you’re off work or school for an extended period with nothing to do, this will keep you busy for weeks, maybe months in moderation. It’s just that it’s not a conventional game that will appeal to the masses. For the record, I’ve loved it.

Quite possibly a niche for puzzle fans who like decrypting messages or sudoku but aren’t fussed about the presentation, features and in-game achievements, Crypto by POWGI is a perfectly good puzzle game for your Switch that will keep you going for some time.