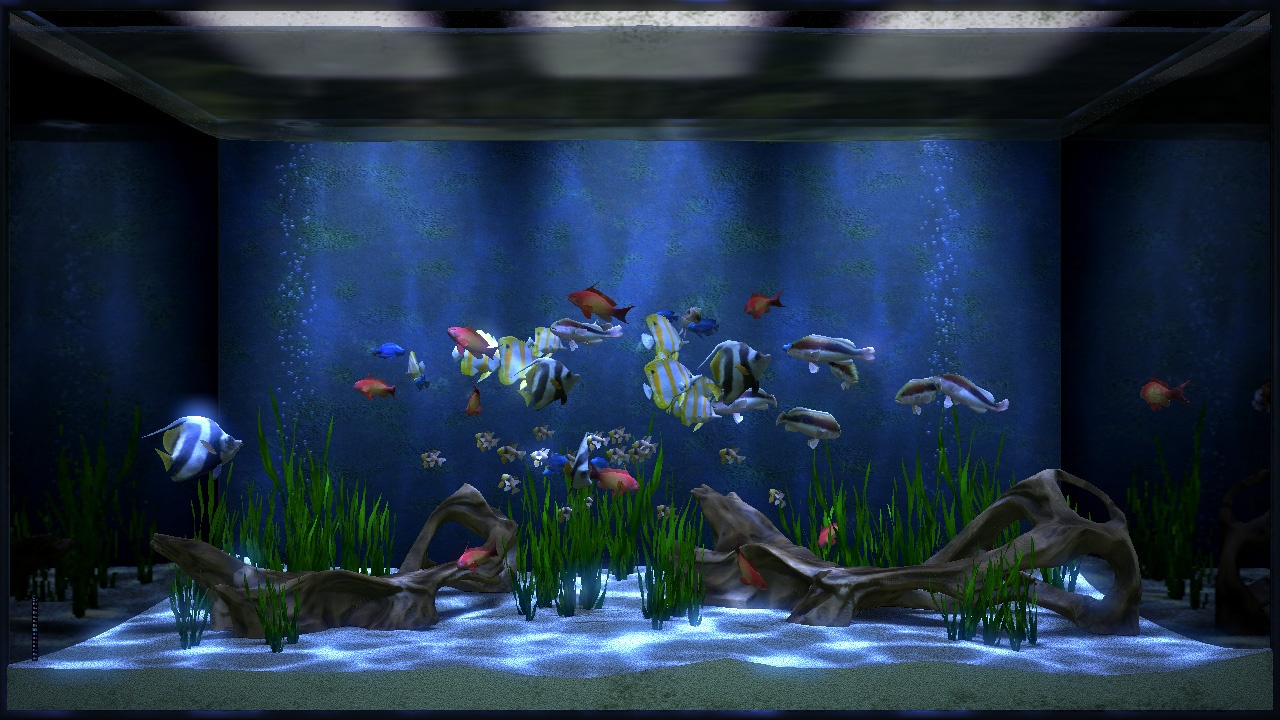 Have you ever wanted to own or create a spectacular fish tank, but don’t really have the time, funds or resources to keep up such an investment or hobby? Well fear not, as all of your dreams can now be granted in Extra Miles Studio’s Aqua TV; a fish tank simulation that is swimming a release onto a Nintendo Switch near you.

The first thing that I have to say about this title, is THIS IS NOT A GAME. It’s more of an app, recreating a variety of digital aquariums for your viewing pleasure. Although the title has been around for a while, seeing a number of releases on a variety of platforms, including Playstation and android devices, with a constant thirty frames per second and the portability of the Switch, this is easily the best version to date; at least in terms of technicality. You start off with a choice of tank sizes, from small to large, as well as an option to create a Tropical Reef; an undersea view that houses larger varieties of aquatic forms, such as sharks and rays.

Once your tank, or view has been chosen, you can add your own touch of personalisation to the aesthetics. From a variety of options, you can select different backgrounds, ornaments and bases. However, despite the choices on offer, what is available is quite limited; at least in terms of what you can create within your tank. For instance, although there a wide variety of ornament types, you can’t place them wherever you like. Instead the app places in them in a pre-determined way. Background images too are limited to the selection that this title offers, which in my opinion is a slightly missed opportunity, as having the option to include screenshots that are stored on the Switch would have been a nice inclusion. Bases are well catered for though, with a variety of sand or stone based levels that come in a variety of grains and colours. 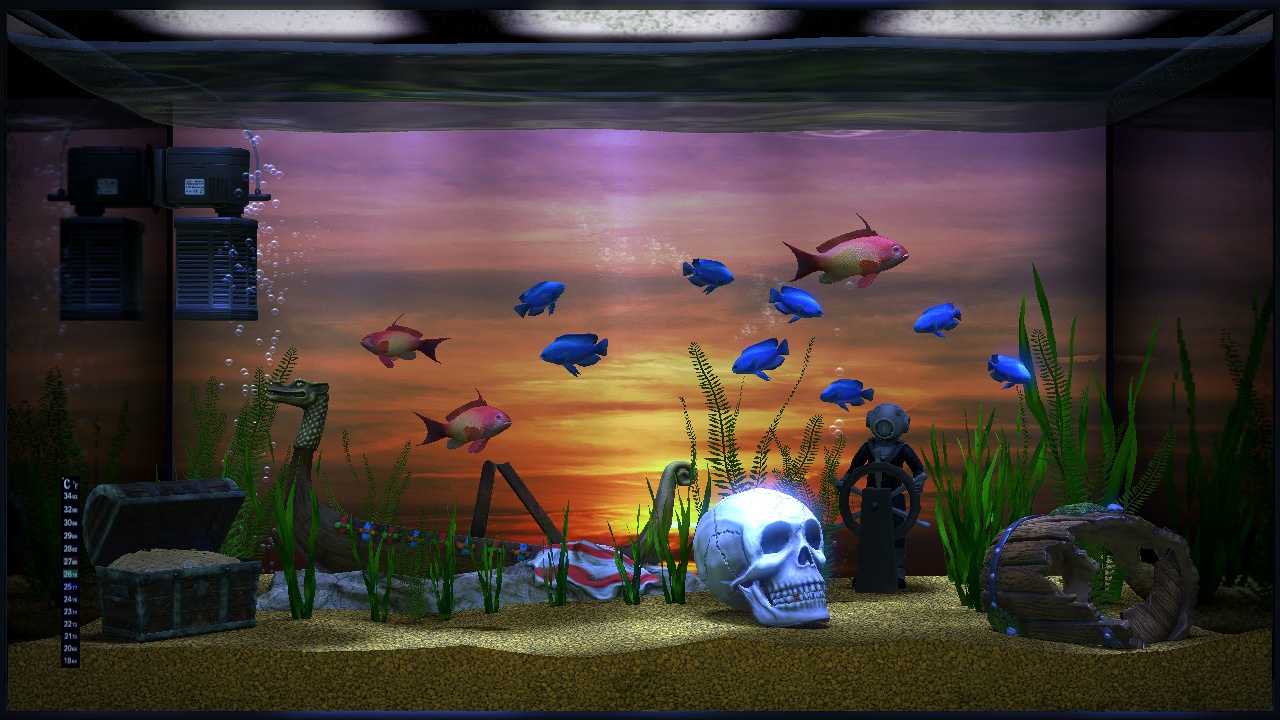 Obviously, the most important thing to have in your tank, is the fish. Depending on what size tank you choose, the amount of fish you can have in each one varies; with lesser amounts in the smaller tanks to an ocean’s worth in the Tropical Reef. The selection of fish available are quite nice, with some instantly recognisable species such as the clown fish. However, I have to admit that there were also a few species missing that I would liked to have had, such as Tetras or Suckers; a variety of fish that are always found within your local aquarium suppliers. Saying that though, what there is on offer is a nice eclectic mix of smaller and larger fish, also coming in a variety of colours.

Once everything is set in place, you can then sit back and enjoy your creation, either to a variety of soundtracks, the bubbling of the pump or in complete silence. However, if I were to speak in terms of being in a nutshell, that’s all there is to it. You simply create and watch, which in itself is nice, but some interaction would have a nice feature. There’s no feeding mechanic, or cleaning the sides of the tank or any form of maintenance whatsoever. Again, this is a missed opportunity, as some form of interaction or immersion with your tank would have greatly enhanced the experience that you can have with this title. 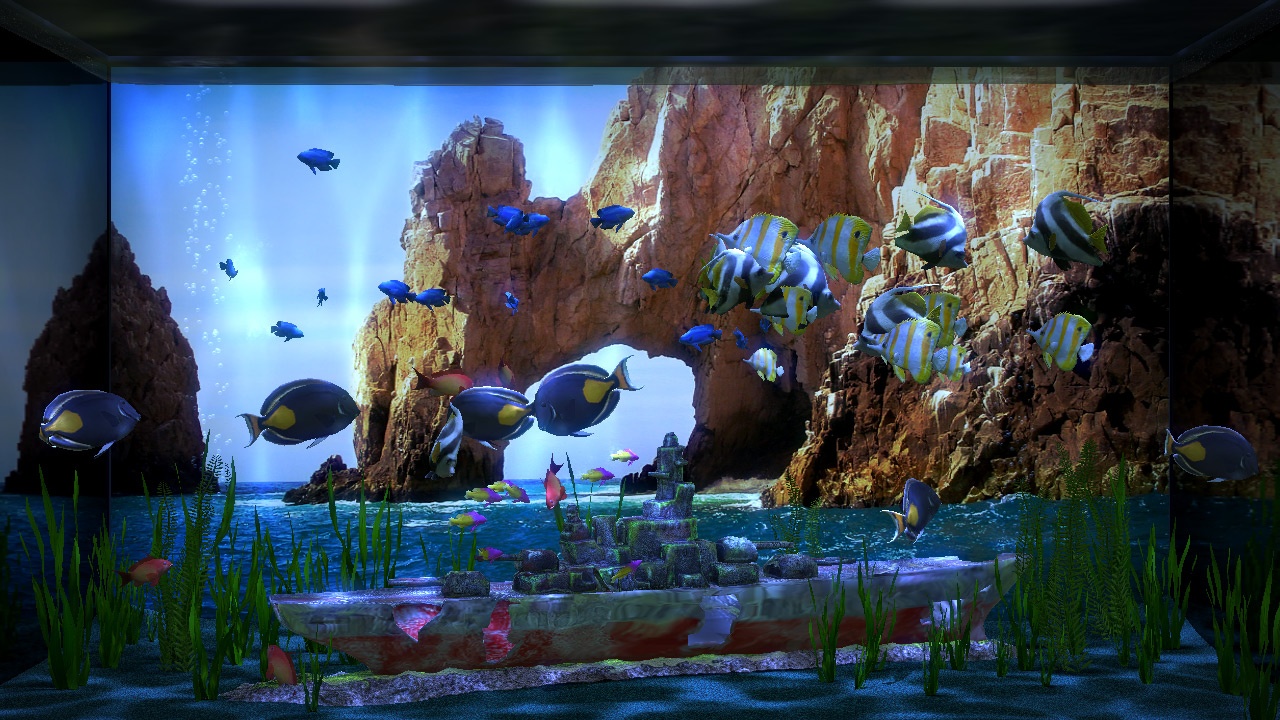 In terms of how the tank looks and behaves though, the developers have done a fantastic job in creating a realistic looking aquarium. Light glistens from above the tank, creating shadowy textures that dance between the gliding smoothness of the fish as they swim around your tank; all of which do so in a very realistic fashion. In terms of creating a focal point and watching your tank come to life, there is some immersive quality to this title. Once you dock your Switch, then your TV becomes one huge fish tank; adding an ambience to your environment, whether it be the living room, kitchen or bedroom. In terms of that, Aqua TV does a fantastic job.

To be honest with you, having your Switch on a large screen TV is where the beauty of this title lies. It simply doesn’t have the same effect when using this title in hand-held mode. However, there’s no pro controller support available here either, meaning that you have to undock your Switch should you wish to make any changes to your tank. You can disconnect the joy-cons, but this is a title that functions best with its touch-screen support. It’s not a big deal, but one that I sorely missed; mainly due to my Switch being within a case that I had to take on and off in order to change my tanks setting whilst displaying on the TV and in my opinion, is not an ideal situation. However, you can set up the display so that it switches from tank to tank, or shows your creation from a variety of viewpoints automatically.

Overall, Aqua TV does what it sets out to do in a very realistic fashion; albeit though, not in a very exciting or particularly interactive or immersive way. In short, what this app does is creates a form of screen saver for your TV, or if you really dream of having an aquarium in your room, but it’s not really practical, then you’ll definitely get what you want from this title. In terms of scoring this title though, it would be unfair of me to mark this in the same way as a game; as it simply isn’t one. However, in terms of creating a digital environment and a nice ambience that would suit any room, then this a title that does a satisfactory job of doing so and, in that respect, is how I will grade it. So, if you don’t mind, I’m off now to stare at the passers-by who gaze though my window in wonder at the marvellous eighty-two inch fish tank that now hangs upon my wall.

A virtual aquarium to change the ambience of any room; as long as you have a television in it.