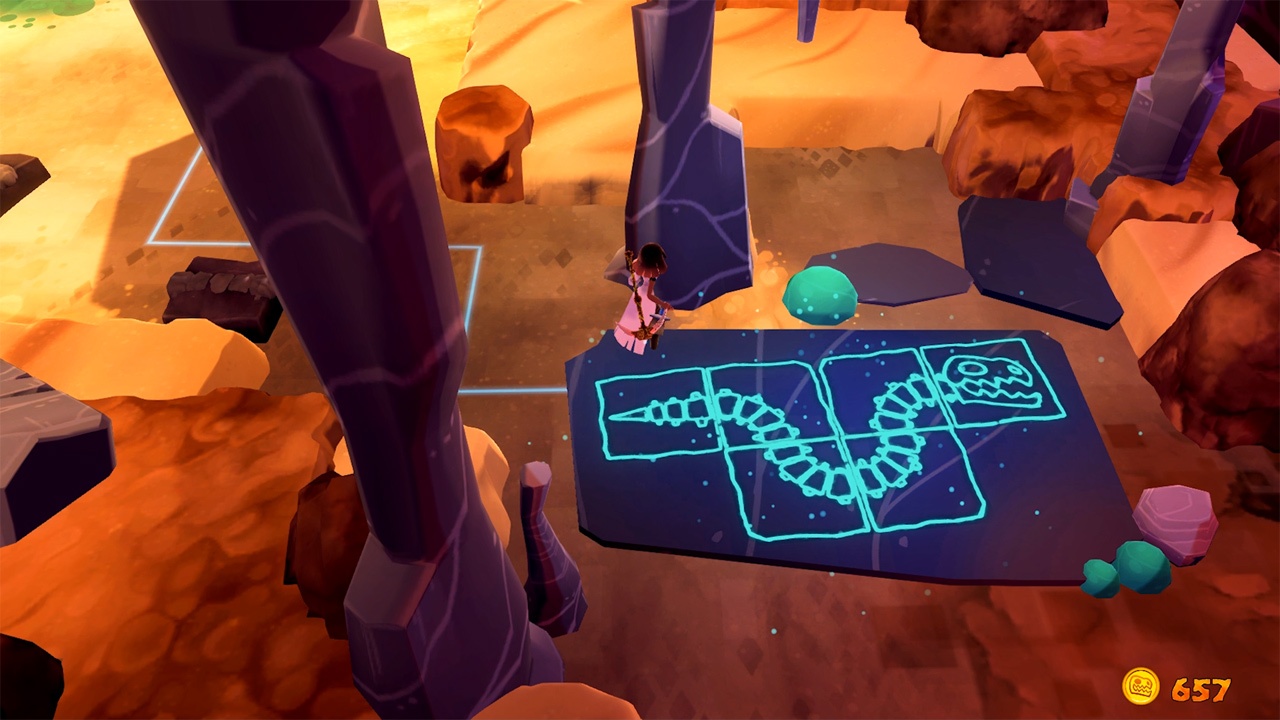 The legacy of the Dinosaurs has been a concept that has long fascinated both young and old alike; especially the art of archaeology, where you dig up the remains of fossils; placing them together to produce 3D examples of what these great beasts would have been like when they roamed the earth. Well, now with Fossil Hunters on the Nintendo Switch, you can do all of these things, either alone or with a group of friends.

Developed by Reptoid Games, with publishing through Smiling Buddha Games, this adventure puzzler places you in the shoes of an archaeologist as you delve in to the depths of a variety of locations, digging the scene and putting together any series of bones to create the skeletal forms of great beasts. The game begins with a choice of four different characters with whom to play. There’s no discerning differences between them, apart from gender and aesthetical appeal. Once picked, you then find yourself within the base camp of an archaeological dig site, where, via a radio, the lead hunter sets you a series of tasks around uncovering buried bones and collecting the pieces to make dinosaurs to order.

Using an elevator, you are plunged into the depths of the dig site, where you are free to tackle the level however way you want to. It creates a sandbox style of play, as well as a tempo that suits whatever style what you want to play. Armed with a handy pick-axe, you dig around each of the levels, uncovering all manner of hidden items from fossil pieces, golden coins and clues to the whereabouts and activities of the fossil hunters that have come before you. However, you also need to be aware of your surroundings, with some levels containing not-so-friendly inhabitants, collapsing ceilings and traps. 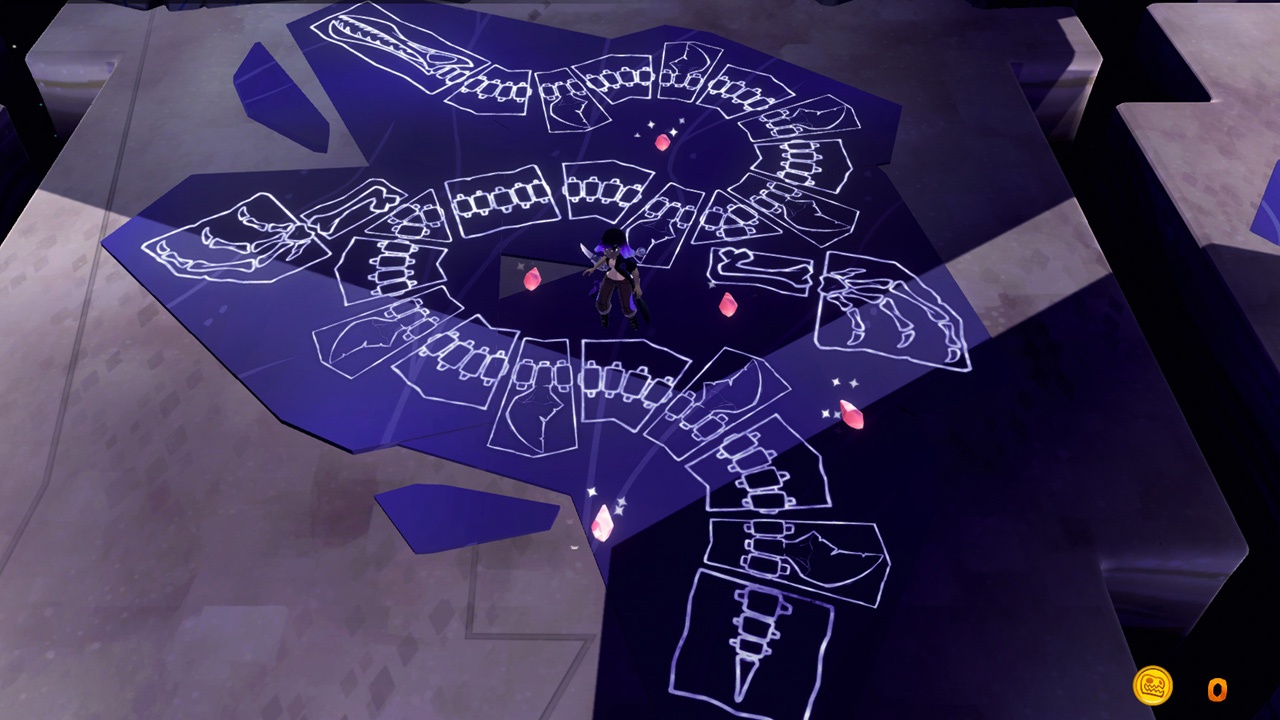 Should you get caught within one of the hazards, you lose everything you have unearthed; although some items can be re-dug up. Thankfully, the game doesn’t punish you too much for being caught up within a disaster; making it an ideal game for younger players with a mechanic that doesn’t frustrate. With around thirty levels to dig through, across four distinct environments from Mushroom Caverns to the Magma Chamber, there’s enough variety here for you and your friends to dig through.

Within each of the levels, lies a blueprint that contains the plans to build a species of prehistoric origin. By uncovering the pieces needed, you can then drag each piece to fit within the design of the blueprint. Once completed you are awarded coins, as well as providing power to the elevator to descend further into the dig site. However, you are also tasked with fulfilling a series of customer orders, who are looking for a specific type of skeletal model; whether it be a beast with two heads, or six legs. There’s no blueprint for these designs and it’s up to you to create these models by using the various fossils that you uncover through digging. Completing these orders awards you with substantial monetary rewards, which you can use towards purchasing upgrades and equipment.

The deeper you venture, the bigger the challenge that awaits, through larger dinosaur types that need to be built, increasingly complex customer designs, larger maps and levels to traverse through and an increase in the hazards that await you. However, to help you aid you, you also get access to a number of items to help make your job easier. These can range from lamps to light up the area, bridges to cross the numerous ravines, structural braces to hold the ceiling in place and explosives to help clear larger areas. As well as these, you can also upgrade your equipment with three varying forms; stronger digging power, faster running speed and increased dragging speed. These can be acquired through a series of liquefied pools; although reaching these areas can be hazardous at times. 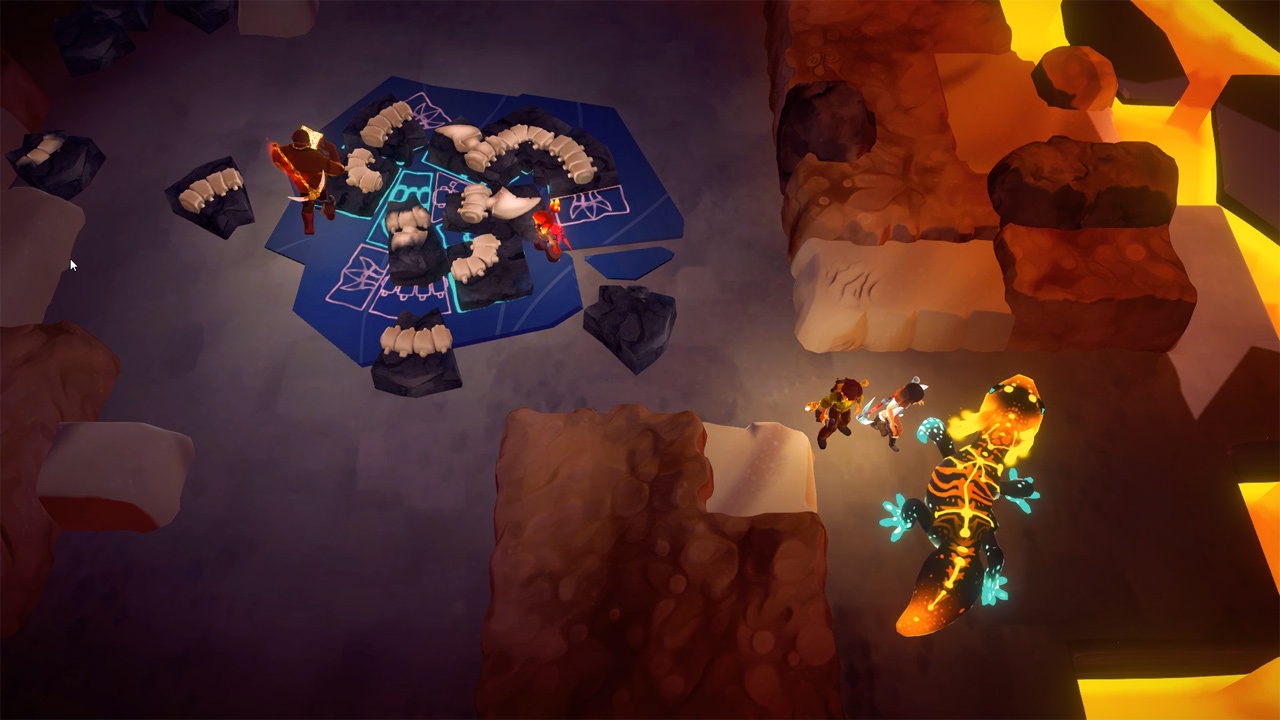 There’s enough content within each level to keep you interested with its elements of intrigue. As well as uncovering rare fossils and treasures and recovering notes and journals from previous explorers, there are a number of hidden passageways, parkour elements and valuable gems. These can be a challenge to find or retrieve, but usually grant more lucrative rewards with their successful uncovering. Dusting off the various forms of fossilised bones can also uncover rare artefacts too, again, rewarding you handsomely should you come across such rarities.

The game is played from a slightly three-dimensional, top-down view, with a good field of range around each level. Although quite basic in its graphical presentation, there is enough to keep your interest peaked. It’s control scheme is suitably easy to pick-up-and-play; making this an ideal game for casual, family sittings, especially with its local multi-player capability for up to four people. It’s simple mechanics, means that Fossil Hunters is a game that can be enjoyed by all age ranges, producing a co-operative experience that is a joy to play with your children; should you have any. Its drop-in/drop-out style of gameplay promotes an ease of play, with little or no penalty for dying or quitting the game.

However, there are some bugs present in its multi-player capacity; especially revolving around off-screen characters. Unfortunately, the co-op gameplay comes on a single screen, and not split as many games do these days. This can lead to some characters moving off-screen; often resulting in a grisly demise as they fall off ledges or succumb to traps. The bugs lie in the game’s re-spawn mechanic, as it fails to re-introduce your character to the proceedings; although leaving the game and re-joining fixes this. It’s not major, but can still be annoying, although it doesn’t really detract from the whole experience. Be assured though, that the developers are aware of the issue and are working on a patch to fix this. Overall though, Fossil Hunters isn’t a bad game in a casual capacity. It’s best played with friends or family, although its single-player element can still garner enough interest to keep you playing. The game ultimately shines though, as a family-friendly experience for parents to play with their kids, although the deeper you delve into the depths of the dig site, the larger the maps and the more complicated they become, as well as more time-consuming. However, if you’re looking for a good, relaxed co-op affair that will satisfy your bones, then you don’t need to dig any deeper than this game.