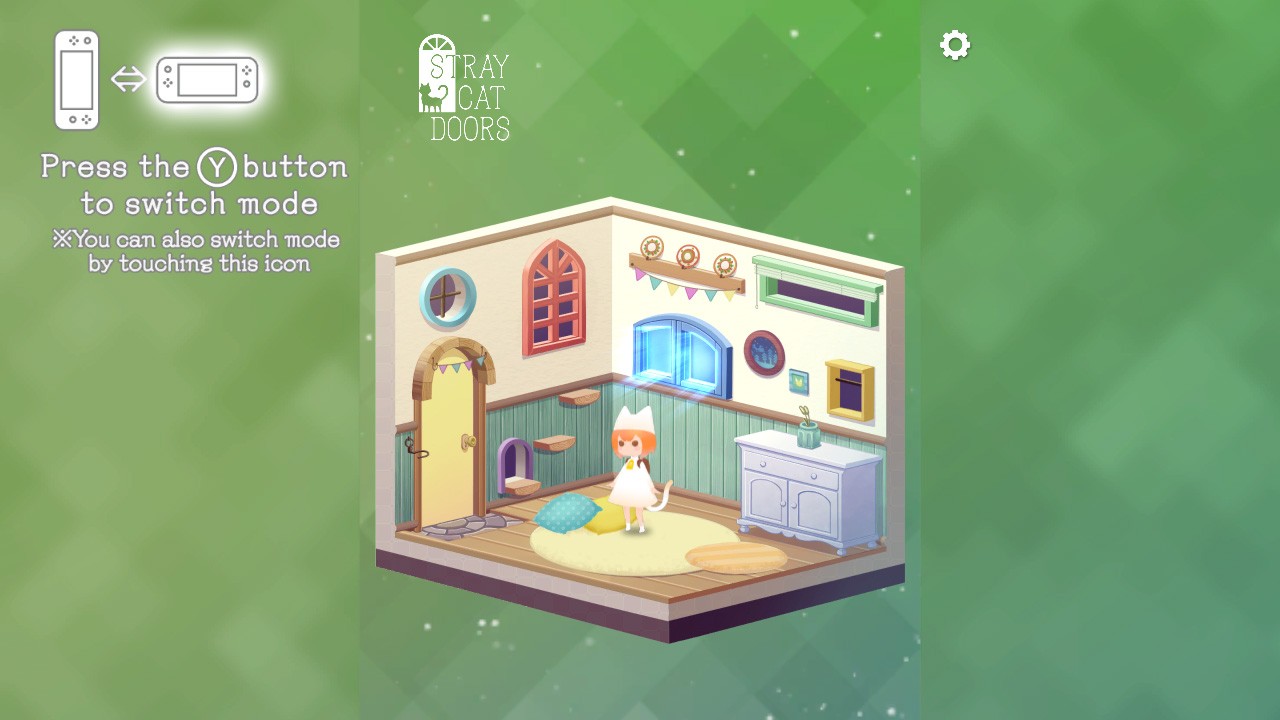 Stray Cat Doors is a collection of puzzles where the object is to find clues to collect pieces of a cat-shaped key in order to leave a room. Brightly coloured and cutesy in appearance, Stray Cat Doors actually poses a significant amount of challenge and you’ll need to think outside of the box and put on your detail goggles and thinking cap in order to proceed. Typically when you think of an “escape room” game, you think of something sinister, but Stray Cat Doors turns that notion right on its head.
Using the touch screen, you’re able to select items that can be picked up or interacted with. Not every object can be selected, but those that can fall into one of two categories: Ones that you can enter information into and ones that you can take with you and use in conjunction with other objects. The latter are automatically added to the inventory bubbles on screen and you can use them by highlighting the item you want and the tapping the secondary item. There are various clues and solutions littered throughout the room and it will take a careful eye to notice them. 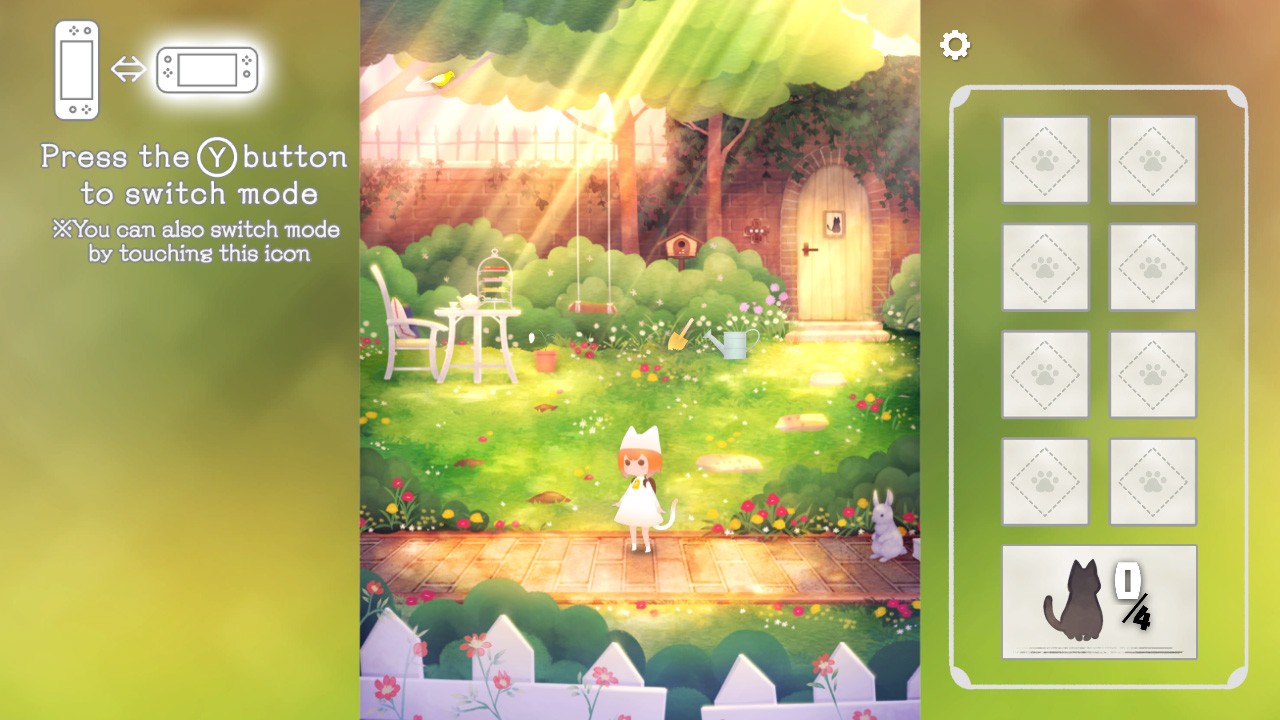 There are a handful of different puzzles types found in Stray Cat Doors. Some require you to make mathematical calculations while others just ask you to pay close attention to the order of things. For example, in one of the rooms a passcode could be found by finding the corresponding number of footprints. The correct footprints were hidden amongst ones that were very similar, but not quite the same, so the puzzle was two-fold: pay attention to details and figure out what one thing (the paw prints) had to do with the other (the pass code).
Rinse, wash, repeat… Well, to an extent. There are only 6 stages, not counting a bonus mini game after you’ve completed them, meaning that Stray Cat Doors can be completed in a single sitting. Depending on how astute your observational skills (or how often you use hints/answers), each room will likely take you around 5-10 minutes total. Even if you’re loafing around, admiring the objects within the scene, it won’t take you much longer to figure out how to escape. The aforementioned bonus mini game uses items found previously in the stage. There are six stages so, naturally, there are six items in total. You have to figure out how each one can logically be used in each stage–i.e.if you have matches, it’s only logical that you’d use them to light something. While it serves as an amusing diversion, this, afterwards, only takes a minute or two to finish up and served as another example of just how short Stray Cat Doors truly is. 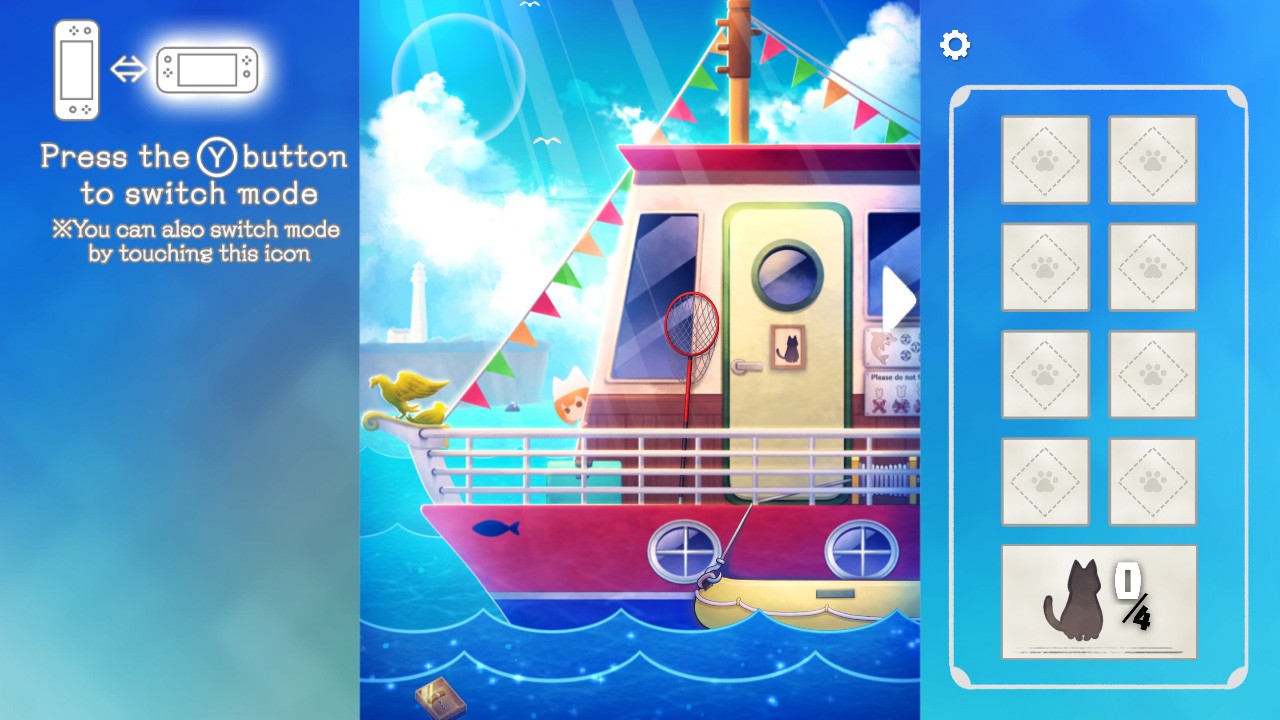 For those in need of a hand or even a solution, there’s a hint system that can be called upon at any time. Sometimes the hints are vague, so I wish there had been an option to get multiple hints rather than just suck the fun out of everything by giving you the answer right after. I only got stuck once, for the record and the puzzles, while challenging, were not impossible to surmount.
There’s no real story to Stray Cat Doors; just a series of still images depicting the young girl protagonist and a cat. I’ll assume the name is derived in a literal sense from the fact that opening a door reveals–you guessed it!–a stray cat.  Stray Cat Doors’s peaceful atmosphere is one part instrumental music and one part vibrant appearance.

There’s a lot to like here for fans of puzzles games, but it’s a shame Stray Cat Doors is such a succinct experience. Given the low price point it’s easy to recommend Stray Cat Doors, but those looking for something like the Nonary Games series, which will take you dozens of hours to see through the twisting, turning storyline, will find the former to be extremely lacking. Therefore, take this recommendation with a grain of salt. Is it a good game? Yes. It looks good, works as it’s meant to, and has a good amount of challenge as an escape game is meant to. Is it a great game? No. And let’s not forget that it’s available completely free of charge on your mobile phone–only with ads.

Brightly coloured and cutesy in appearance, Stray Cat Doors can be completed in an afternoon and will leave you wanting more.