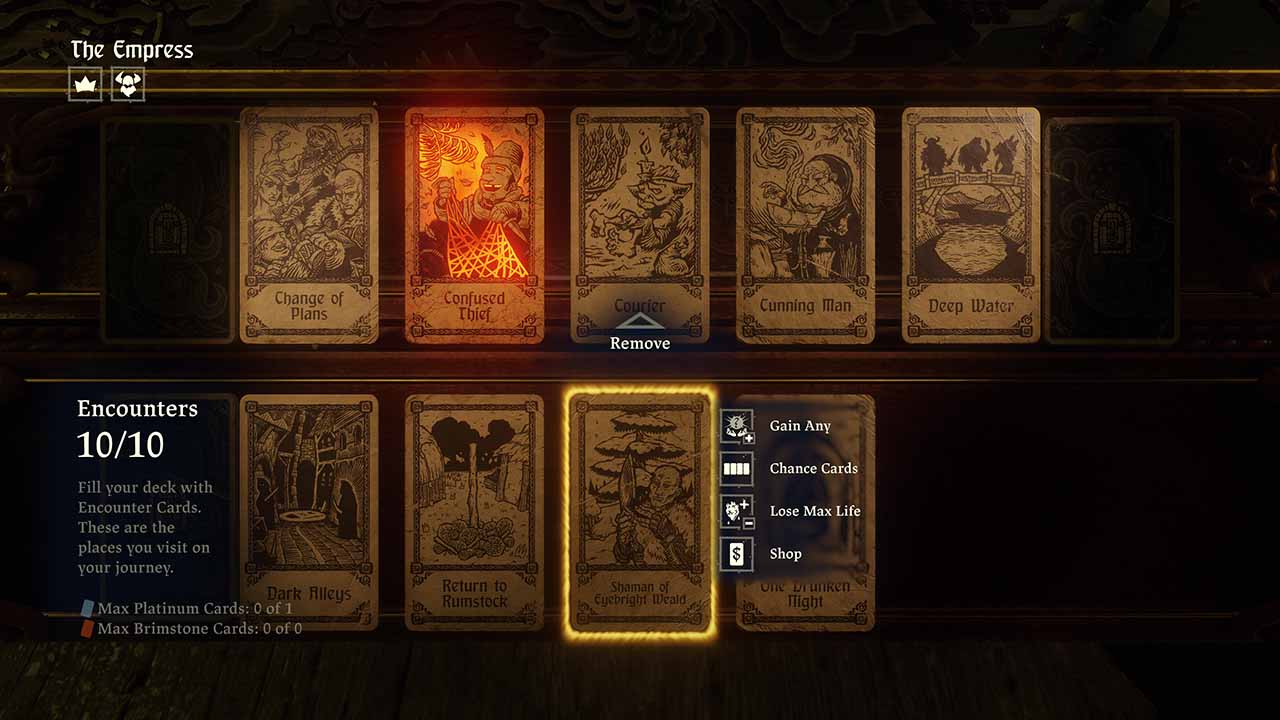 These days, the majority of role-playing games focus on expansive landscapes and majestic stories to produce titles that are often awe-inspiring in their scale. Not that there is anything wrong with that, as some of the most impressive games throughout gaming history, or available to buy today, are borne from within this concept. However, every once in a while it’s nice to go back and re-visit the roots of where role-playing originated from, namely the table-topped adventures of random encounters, dice rolls and a dungeon master to unfurl an untold story. With the release of Defiant Development’s Hand of Fate 2 on the Nintendo Switch, we now have a game that revisits that time of old; successfully capturing the atmosphere from that era and the feel with its unique style of play.

The main setting of the game sees you sitting opposite the dungeon master, or dealer as he’s known, within the confines of his travelling caravan. With no memory, or sense of direction in where you are heading, you begin your story as the fool, an adventurer who journeys into the unknown, as the dealer reveals a variety of cards that determine your fate, as well as your future. As time waits for no man, you’re immediately thrown into the story as the dealer lays a trail of cards before you; although this first setting for your adventure also explains some of the game’s mechanics, both in path selection and the elements in combat. Using a rogue-like mechanic, the paths that are set before you are random with each deal, producing a game that perfectly replicates the choose-your-own-adventure mechanic perfectly.

Within a small cabinet, lies a scaled model of the land in which you traverse; offering a variety of twenty-two different episodes, or events. Although these elements remain the same in their story-telling mechanics, the path laid out from the dealing of cards produces a different journey each time. This map also includes another game mode, Endless Mode, which pits you in testing how far you can adventure before dying; previously released as DLC, but now included with the main game upon this release. As well as this, the game also comes with two other forms of DLC in the Dealer’s Apprentice and Shattered Memories, bringing more cards and options to the gameplay values that are on offer here. 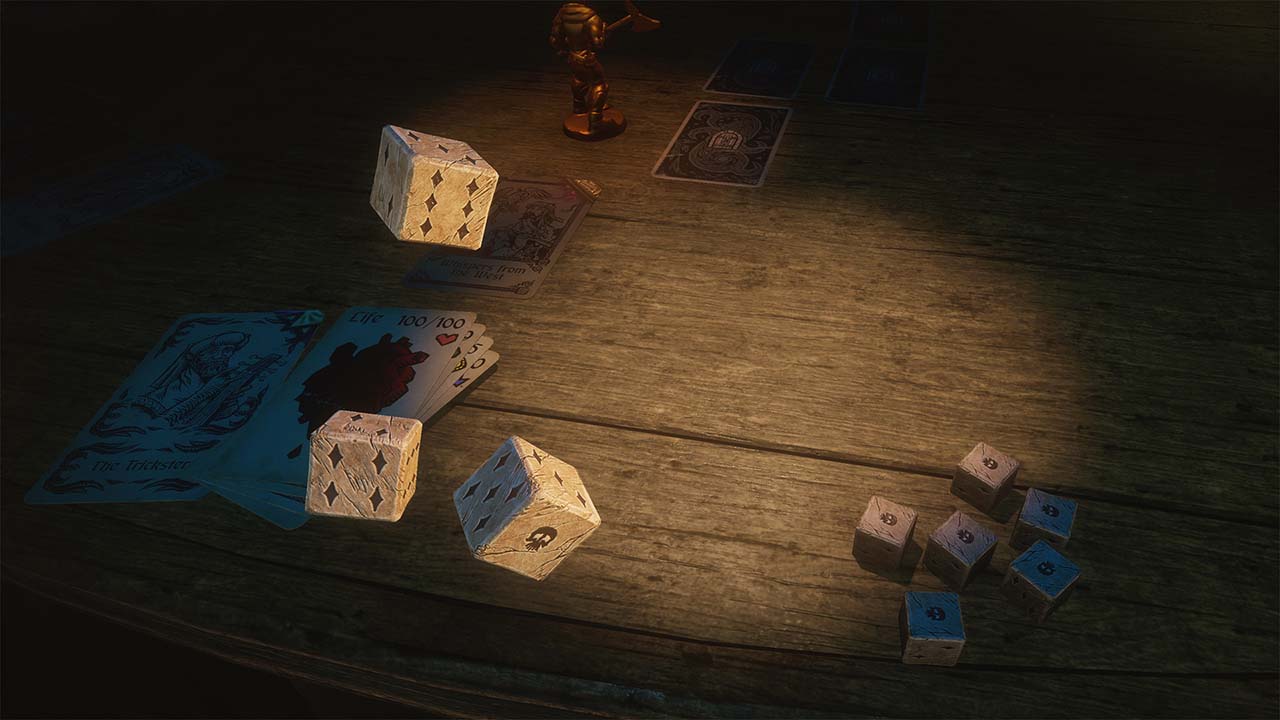 The main premise of the game involves the dealer laying out a set of cards before you; creating a path for your journey in a grid-like fashion. Using a token of yourself, you move your counter along the path of cards, revealing their contents as you select them; each one containing an event that either helps or hampers your progress. Each of the episodes also contain a prerequisite number of challenges or mission parameters that need to be met before reaching the culmination of your journey; although not fulfilling this criteria isn’t always essential as failure opens up another challenge for you, albeit a more difficult one to get through.

Turning over the cards reveal a variety of options that you must either overcome, collect or make a decision over. These can range from gaining gold or food, equipment such as shields, swords or armour, as well as some random elements that involve dice throws, wheel selections or picking random cards to decide your fate in a given circumstance. As with any good old role-playing adventure, there’s a huge amount of luck that plays a pivotal role in the development of your journey. You can also come across certain stages which enable you to set up camp, in order to regain your health, change your appearance or sort through your equipment.

However, one of the main events that the game presents to you on a regular basis, is the need to defend yourself in bouts of combat. When confronted by enemy foes, or required to perform an act of violence, you are warped to a three-dimensional representation of the land where you must take part in stages of combat. Depending on the number stated upon the card that sends you to battle, you are confronted with a series of enemies who you must engage in hand-to-hand combat until they are all defeated; or until they defeat you. Along with an in-game companion, you can attack, block and dodge; as well as take advantage of companion abilities in order to clear the area of enemies. These sections of the game largely involve the need to be strategic in your attack, often producing bouts of swinging your axe or sword, before rolling to dodge any incoming attacks. 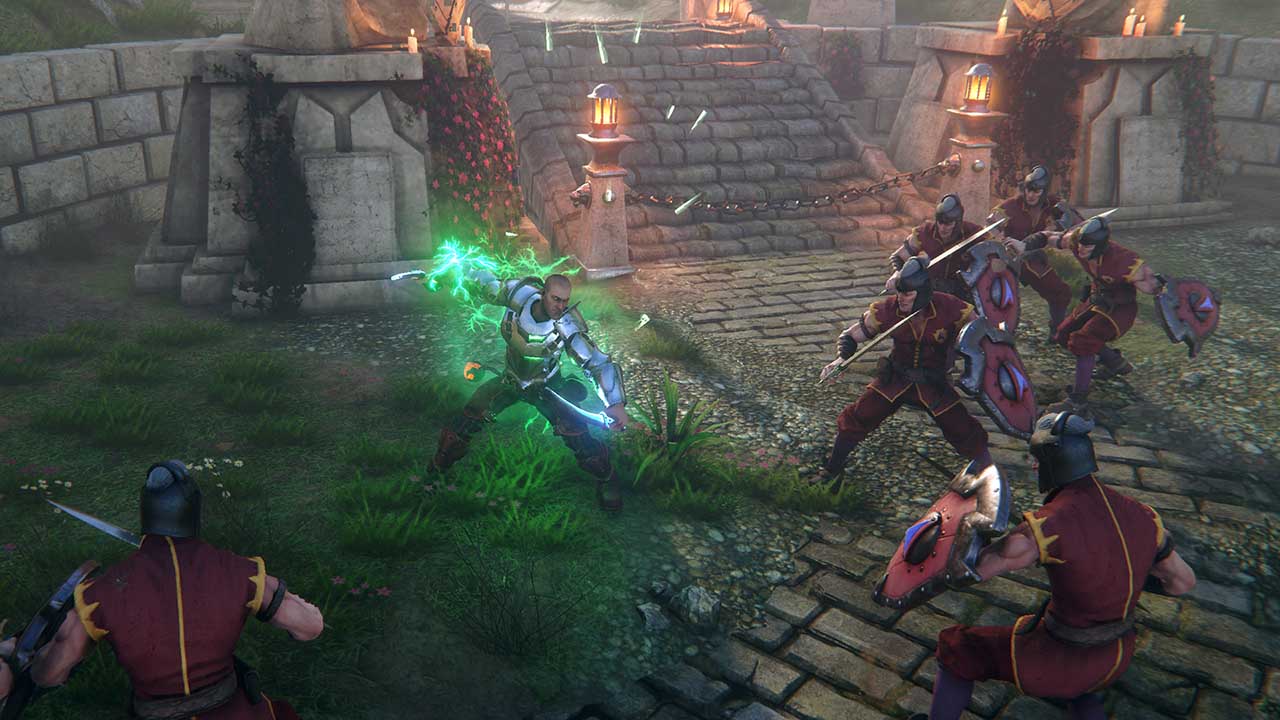 It can take a few battles to get used to fighting, however, once you have mastered the mechanic, you can dodge, block and parry when the time is right; attain a certain number of hits without getting hit yourself and you can unleash a series of powerful attacks and finishing moves that makes you impervious to enemy attacks. These sections add a touch of variety to the game, releasing you from the constraints of sitting at a table; projecting you into the world in a series of locations against a vast array of enemy types. Saying that though, and due to the nature of the game, some locations and foes can repeat themselves, but it’s far from being a deal-breaker. These combat sections can begin to feel a bit repetitive too at times, although they still provide an air of excitement and urgency in their execution.

As you progress further into the game, you begin to unlock a variety of cards that you can use in order to produce your own deck. As you begin to get a feel for different card techniques, weapons and companion abilities, you can personalise your experience by choosing a variety of cards with which to determine the fate of your journey; thus producing a deck that can help to turn the tide of events to your favour. However, you can also make use of an AI selection, which does a pretty good job of building a deck for you, should you so wish.

The presentation values are simply sublime, creating an ambience that perfectly suits the setting of the game. It contains an air of mystery, as does the shrouded figure of the dealer, who pushes the story along with his personal view of the narrative and situations encountered. The premise of not knowing what your next card may contain when turned over, is a mechanic that simply keeps you playing, as well as its elements of luck, skill and strategy. It’s combat is particularly smooth and satisfying, if not a little repetitive in its nature, but still provides a variety to the gameplay that creates an immersion into the story being told. At present, there are a sprinkling of card-based games available on the Switch, but Hand of Fate provides a sublime example of its genre, with its rogue-like elements creating a variety of situations, as well as its old-school feel of role-playing in its finest form, sitting perfectly upon the Nintendo Switch.