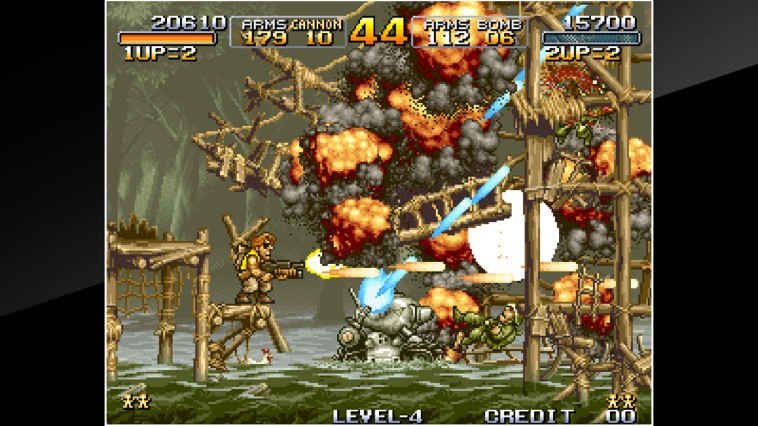 I respect what Hamster is trying to do with their ports for the Nintendo Switch, but I really don’t understand their overall plan. First, they’ve released several great NEO GEO titles, but in no discernible order (date, popularity, alphabetical…nothing). Then, they pushed out the first of the Arcade Archives for Nintendo, but the port was pretty straightforward, no cool extras and apparently the high score mode is borked. Now, I hold Metal Slug (the original) in my hands, and I’m just a few days away from Metal Slug X being released. I don’t even know what to say, but let’s leave it be.

Metal Slug is the original game that started the acclaimed franchise, and it’s easy to see why. Whether coincidence or an homage to another great series, the plot is you, the awesome members of the Peregrine Falcon Strike Force, are sent to stop a mad general who now possesses the power of the super tank, Metal Slug. There’s a lot at stake here, but you’re not worried. Armed with grit, gumption and unlimited firepower, you’ve parachuted into enemy territory, ready to free POWs, blow up everything and eventually defeating the General (or do you?). 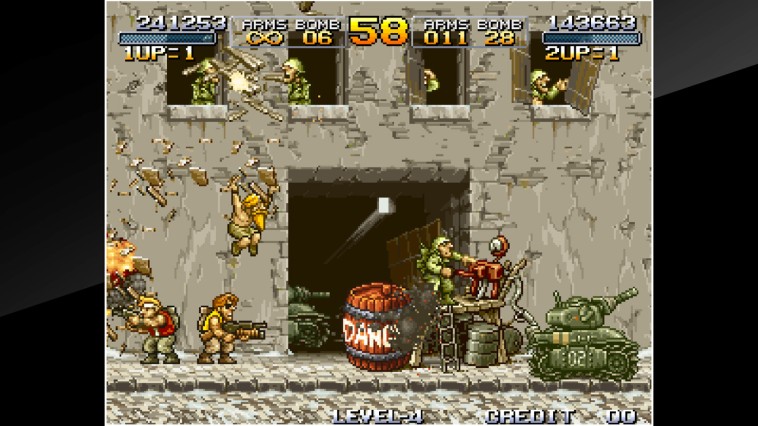 Right from the start, Metal Slug was doing things much more differently than other run and gunners at the time. Firstly, the art style is gorgeous compared to many other games, including the first Metal Gear (arguably not a run and gunner but whatever), Contra (which was onto Super C at this point) and Heavy Barrel. Everything is hand drawn and then turned into game animation, which is what makes Metal Slug so iconic. From the lush forest backdrops to the familiar faces of the shaggy haired, big nosed POWs, it’s impossible to mistake a Metal Slug game for anything else, and this first game is what set the pace.  Even the water areas, when you encounter water, look so much more vivid (certainly not realistic) than most games at the time.

Additionally, Metal Slug does benefit a bit from a sense of humor. Though not nearly as hilariously oddball as Metal Slug 2, the first does have plenty of moments, right from when the first bad eye widens his eyes cartoonishly and screams like an extra dying in a spaghetti Western. POWs, who are wearing only loincloths, can miraculously pull out curtains and produce a brand new weapon for you. And, while games like Final Fight already made it viable to eat whole roast chickens you find in barrels, there is something even more comical about being in the desert, surrounded by insurgents, and discovering what may or may not be a cooked salmon flopping around, which you then immediately eat. There’s no apologies, and Metal Slug doesn’t need to give them.

The action itself is great as well. With a full 180 degrees of aiming, Metal Slug felt comfortable in turning up the difficulty early on because the player does have so many more options than most shooters at this time. Instead of being locked to either being directly in front or slightly above the enemy, you could quickly develop strategies to keep moving, take different angles and not need to resign yourself to “I’m gonna get shot.” Don’t get me wrong, you will get shot, but Metal Slug makes it so you don’t need to simply accept one hit means automatic death. Plus you do develop an affinity for certain weapons (machine gun for life), so you keep your fingers crossed and really need to make a call when other weapons drop, keeping you on your toes. 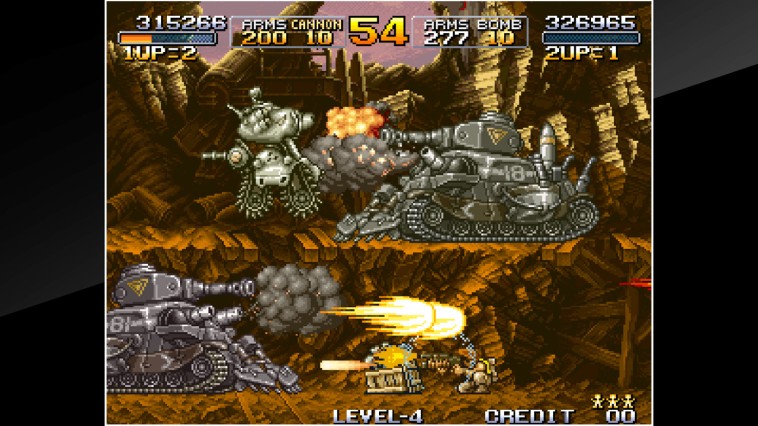 The game still has its caveats, however. Metal Slug, with gorgeous artwork and an ever-busy screen, is infamous for frame drops and slowdowns, and this problem started right with the first game. However, in comparison to the second entry, the slowdowns are much less egregious and really quite livable as long as you plan for them. Veterans of Metal Slug will know that certain moments, particularly boss explosions, will trigger the slowdown, and they’ve learned to use these to their advantage during speed runs, as insane as it sounds.  In any case, it’s an issue that gets fixed in later entries to the series (another callback to Metal Slug X), but they still exist here and will certainly catch a new player off guard, especially since this is 2017 and we kind of expected a little bit of polish on our ports.

This is truly a buyers market for eShoppers of the Nintendo Switch. There are so many NEO GEO titles available now, and it stands to reason that most Switch owners won’t have played many, if any, from this console of the last century. I think it’s important that the first Metal Slug exists here, because completionists and collectors would rightfully complain if they didn’t have access to it. And I do argue it performs better than the second entry, even if it’s not as funny and there’s no character selection to speak of. If you absolutely must have more gunners on your console, then you’ve already made up your mind and I can’t sway you one way or the other. However, if you’re new to Metal Slug and are on the fence, I seriously recommend waiting just another week: X is coming.